UNDER THE MICROSCOPE: Nicholas Owen, 71, answers our health quiz

Fighting fit: Despite some previous health issues, Nicholas Owen is on fine form

Yes, we have a spiral staircase in our home and I think getting up and down that helps keep me slim.

I try to. My wife, Brenda, is very good at making sure vegetables are available. And I like to have a bowl of oranges on the kitchen table — I scoff those at every opportunity.

I have a glass of wine with a meal three or four times a week, and enjoy the odd cocktail and half-pint of ale.

My mother, Edna, died when I was eight — she’d had rheumatic fever (a disease of the joints, heart and lungs) in the Thirties. She was in poor health after that and should probably never have had me. My father, Tom, sadly died aged 61 from pancreatic cancer.

I was diagnosed with kidney cancer in 2002. The kidney had to come out, but luckily the tumour hadn’t spread, so I didn’t need chemo or radiotherapy. I was back at work within two weeks.

Several years ago doctors found I had DVT [deep vein thrombosis] in my leg, and it turned out I have a blood condition, Factor V Leiden, which increases the risk of clots. I have to take the blood thinner warfarin daily.

My appendix about ten years ago. 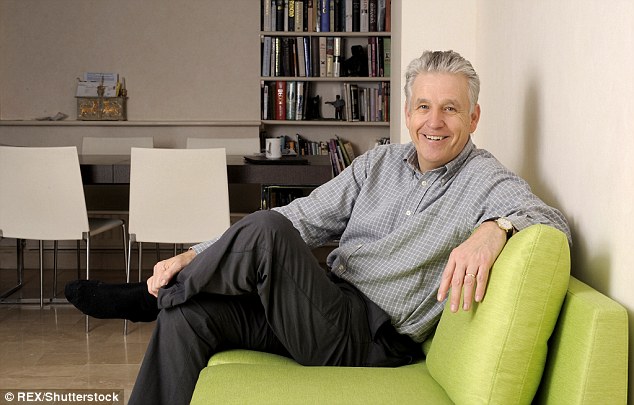 Cheers to that! ‘I have a glass of wine with a meal three or four times a week, and enjoy the odd cocktail and half-pint of ale,’ he says

Part of me would like to get rid of my jowls but my father and grandfather had them, so I’ll just put up with them.

To be frank, I’m a bit suspicious of all that stuff.

I’d admit to gloominess at times, but I wouldn’t call it depression. Life can sometimes seem a bit greyer, but I remind myself I’m lucky to be here.

I haven’t needed one for a long time. I remember in my 20s calling a doctor out one morning, after a heavy session. By the time he arrived I was feeling much better!

I went potholing for an assignment, and I’ll never do that again — I didn’t enjoy being in such a confined space.

When I think of all my grandparents witnessed in their lifetime — they were born before planes could fly — I wish I could live for another 100 years just to see all the changes that will take place.

Nicholas is a BBC News and Classic FM radio presenter. He supports the Children’s Trust (thechildrenstrust.org.uk).