Underworld gangs are behind massive rise in fly-tipping as they set up fake firms to hire premises, fill them with waste, then flee in crime dubbed ‘the new narcotics’

By Rory Tingle and Jack Wright For Mailonline

Organised criminal gangs are being blamed for a dramatic rise in fly-tipping, as the Environment Agency calls illicit waste disposal ‘the new narcotics’.

An investigation by the BBC found that large-scale fly-tipping – involving a tipper lorry load or more of waste – has more than doubled in six years.

Underworld crime families reportedly set up fake companies to take over warehouses, fill them with waste, then flee from the carnage, according to the BBC.

They profiteer from advertising their services online for a fee, while their illegal practice has set councils in England back in the millions.

Statistics indicate that local councils in England have been saddled with £60million in clean-up costs since 2012, as London and Manchester are hit hardest.

According to the BBC, thousands of tonnes of illegal waste have been dumped in warehouses occupied by suspected criminal gangs (pictured, in Staffordshire)

Whilst the Government claims the rise in numbers could be due to better recording, others are demanding tougher measures to end the crisis.

The National Farmers’ Union (NFU) said the new figures exposed a ‘nightmare’ situation that is continuing to ‘spiral out of control’, while campaign group Keep Britain Tidy called for a Government clampdown.

Allison Ogden-Newton OBE, Chief Executive of Keep Britain Tidy, told MailOnline: ‘Everyone can help fight the fast-growing mountains of fly-tipping. This is a national disgrace that is costing tax-payers and the environment dearly.

‘At Keep Britain Tidy we think it’s #CrimeNotToCare. Our campaign highlights how ordinary householders can cut the supply chain to organised criminals by not handing over their waste to unregistered carriers.’

A spokesperson for the Environment Agency told MailOnline: ‘Waste crime is an unacceptable blight on our environment, estimated to cost the UK economy at least £600million a year and put communities at risk.

‘We are determined to bring waste criminals to justice, which is why anyone found guilty could face jail time or a hefty fine. In the last year, we closed down over 900 illegal waste sites, brought forward 113 prosecutions and launched a Joint Unit for Waste Crime to bring down the most serious and organised criminal groups.’ 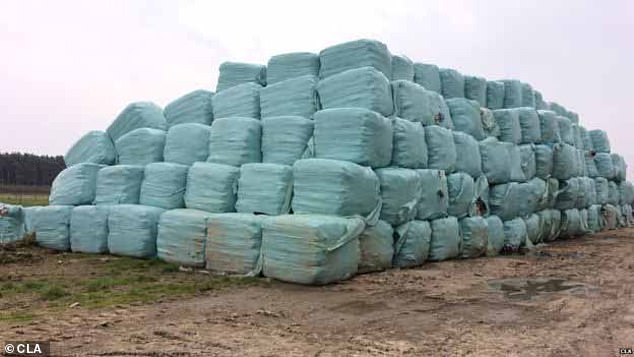 Whilst the Government claims the rise in numbers could be due to better recording, others are demanding tougher measures to end the crisis (pictured, on Nottinghamshire border)

Manchester City Council recorded the most large incidents in five years between 2012 and 2019, averaging up to 1,672 clean-ups per year.

And in south London, Croydon Council had the highest average annual number of large incidents per capita, as well as the biggest increase in large fly-tipping in that eight-year period, according to Government data.

Meanwhile in Wales, large fly-tipping has generally decreased, which officials claim is due to the national campaign run by Fly-tipping Action Wales.

Scotland and Northern Ireland fly-tipping data was not publicly available.

Last year, the Environment Agency told The Times how huge fraud and fly-tipping schemes were being conducted by organised criminal gangs.