A serene halo of gas has been found surrounding a galaxy around 4 billion light years from the Earth — but it is far less dense and turbulent than experts anticipated.

The halo was detected by analysing a mysterious so-called ‘fast radio burst’ that had passed through it as it headed towards the Earth.

These bursts are mysterious and powerful pulses of energy from distant galaxies, the origins of which are not yet known.

However, the way such pulses are distorted as they pass through galactic halos can help us determine the halos’ properties.

Galactic halos had previously been hard to analyse, as they cannot be seen with telescopes, but studying them may reveal how galaxies shed matter and evolve.

A serene halo of gas has been found surrounding a galaxy 4 billion light years from the Earth — but it is far calmer than experts anticipated. The halo was detected by analysing a mysterious so-called ‘fast radio burst’ that had passed through it as it headed towards the Earth

Astrophysicist Jean-Pierre Macquart of Australia’s Curtin University and the Perth-based International Centre for Radio Astronomy Research (ICRAR) and colleagues discovered the calm halo around a galaxy they have dubbed FG-181112.

‘The halo of gas can actually extend out 10 times further than the stars in a galaxy, and can contain a substantial amount of the matter that’s in a galaxy,’ said Dr Macquart.

‘But it’s very difficult to see the gas directly with a telescope.’

Instead, the researchers probed the gas using a so-called ‘fast radio burst’ — an enigmatic and powerful flash of energy from a distant galaxy — that passed through FG-181112’s halo as it headed towards Earth.

‘Fast radio bursts come from all over the sky and last for just milliseconds,’ explained Dr Macquart.

‘They involve incredible energy — equivalent to the amount released by the Sun in 80 years.’

‘We’re not sure what causes them, and have only recently been able to pinpoint the galaxies they come from.’ 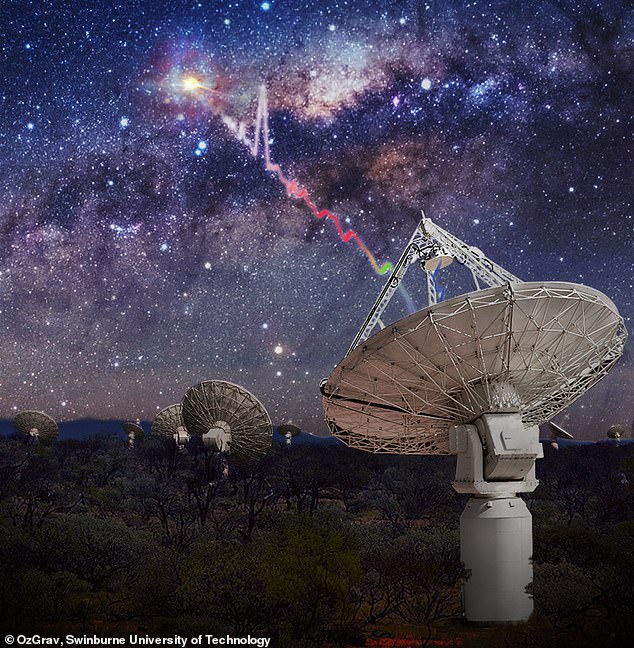 Fast radio bursts, depicted in this artist’s impression, are powerful pulses of energy from distant galaxies, the origins of which are not yet known. However, the way such pulses are distorted as they pass through galactic halos can help us determine the halos’ properties

Using the Australian Square Kilometre Array Pathfinder — a series of radio telescopes in the western outback — the team spotted a fast radio burst in November 2018 that had passed through the halo of FG-181112.

The burst — designated FRB 181112 — had originated in a faint galaxy located around five billion light years away from the Earth.

To determine the properties of FG-181112’s halo, the researchers analysed how passing through the gas cloud had distorted the signal of the burst.

A comparable distortion effect can be seen here on Earth, Professor Macquart explains.

‘If you go out on a hot summer’s day, you see the air shimmering and the trees in the background look distorted because of the temperature and density fluctuations in the air,’ he said.

‘That’s what we thought would happen, that the signal from the fast radio burst would be completely distorted after passing through the hot atmosphere of the galaxy.’

‘But instead of the stormy galactic “weather” we were expecting, the pulse we observed had travelled through a calm sea of unperturbed gas.’

This finding, the researchers argue, suggests that galactic halos may be far more serene than anticipated — containing gas that is less turbulent, dense and magnetised that was previously thought. 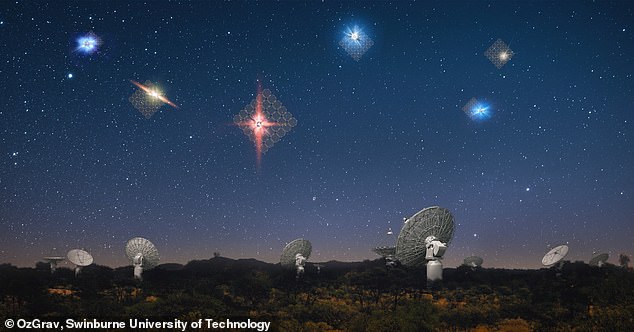 ‘Fast radio bursts come from all over the sky and last for just milliseconds,’ said Dr Macquart. ‘They involve incredible energy — equivalent to the amount released by the Sun in 80 years’

Astronomers are interested in the nature of galactic halos because they can shine light on how material is ejected from galaxies — a process which can cause them to stop growing.

In essence, the halos can be seen as a sort of ‘fossil record’ of this shedding process, explained paper author and astrophysicist J. Xavier Prochaska, of the University of California Santa Cruz.

‘Our observations can inform theories about how matter is ejected and how magnetic fields are transported from the galaxy,’ he added. 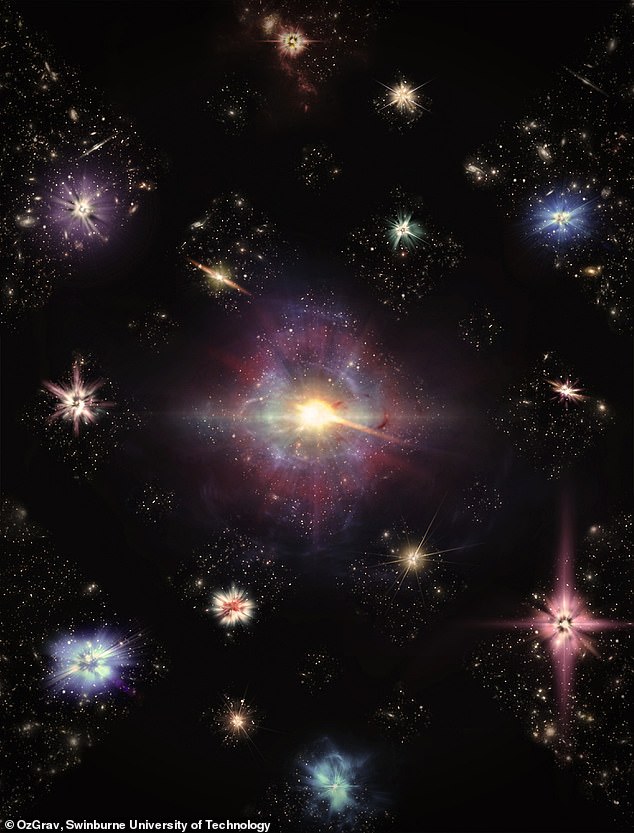 With their present study complete, the researchers are now looking to similarly test other galaxies to explore the prevalence of this phenomenon. Pictured, an artist’s impression of fast radio bursts coming from across the universe

With their present study complete, the researchers are now looking to similarly test other galaxies to explore the prevalence of this phenomenon.

‘Unless of course, this galaxy happens to be just some weird exception — and with only one object you can’t be sure about that.’

WHAT ARE FAST RADIO BURSTS AND WHY DO WE STUDY THEM?