Unhinged review: The wrong film at the wrong time

For months, anyone who cares about the future of British cinema has been looking forward to Unhinged. Release dates for big blockbusters such as Tenet and Mulan seem to have slipped by the week, although the latest news is that Tenet will be out on August 26.

By comparison, Unhinged – its release finely tuned to coincide with the reopening of most English cinemas this weekend – was a constant and reassuring presence. Not least because it had a proper star, Russell Crowe, in it. How bad could it be?

I began finding out as the red curtains swished back at what was my first visit to the cinema for over four months. Gradually, all my pent-up excitement, all the thrill of being back in the game, slipped slowly and miserably away. 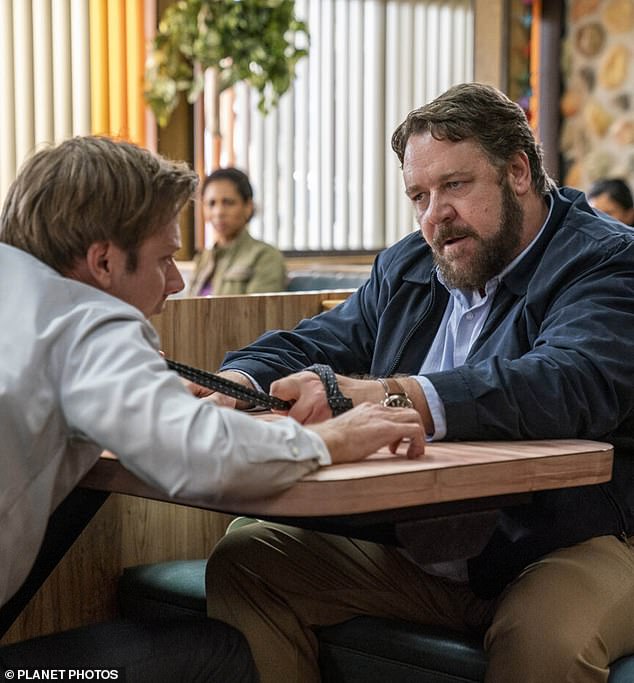 Unhinged was a constant and reassuring presence. Not least because it had a proper star, Russell Crowe (above), in it. How bad could it be?

Not only is Unhinged just plain not very good, it’s also the wrong film at the wrong time, cynically released by distributors clearly hoping that the combination of Crowe’s name and our desperate desire to see something new will bring the paying customers running.

Well, save your money.

Unhinged is essentially the 1971 TV movie Duel, but without the style that made its director Steven Spielberg famous and without the menace and unexplained mystery that still makes it compelling viewing today.

Unhinged replaces both with a super-sized Crowe and a steadily mounting body count.

A recently separated and stressed mother is late driving her already anxious son to school. So when she gets stuck behind a pick-up truck at traffic lights that have just turned green, she doesn’t spare the horn. Big mistake.

For what she doesn’t know is that the driver of the pick-up (Crowe) has just murdered what we assume was his ex-wife and new partner and is in no mood to be honked at. And when she doesn’t apologise, Rachel (a poor Caren Pistorius) is in real trouble.

As are her son, divorce lawyer and just about anyone in her phone contacts…

I think you can see where we’re heading for the next very nasty 90 minutes, in a film conspicuous for its complete inability to say anything interesting about mounting anger levels in the modern age. Which, naturally, made me very cross indeed.