A hero police officer suffered multiple skull fractures when an uninsured white van man tried to murder him in a savage machete attack, a court heard.

PC Stuart Outten, 29, was severely injured and may have been killed had he not managed bring down Muhammad Rodwan, 56, with his Taser, the Old Bailey was told.

The officer was on duty with female colleague PC Helen Brooks on 7 August last year on High Road, Leyton, east London, when a spot check revealed the vehicle was not insured.

The van was stopped but handyman Rodwan shouted at officers then drove off. When he stopped again the two officers tried to get hold of Rodwan, said prosecutor Jonathan Rees QC. 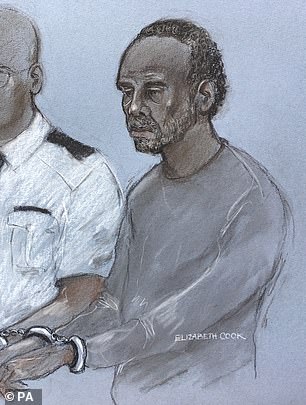 Pictured: Muhammad Rodwan, who has denied attempting to murder the police officer

‘PC Brooks took hold of the hood on the defendant’s parka coat and PC Outten told the defendant to ‘get out of the f***ing car’ as he grabbed him.

‘He noticed at point that the defendant was trying to reach into the back of the van, behind the seats.

‘PC Outten informed the defendant that he was under arrest for assault police and cautioned him. 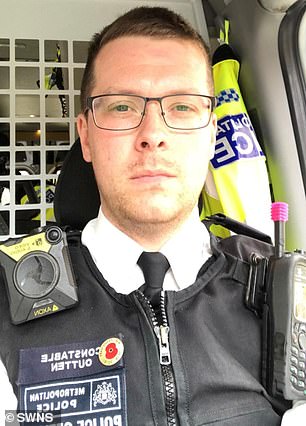 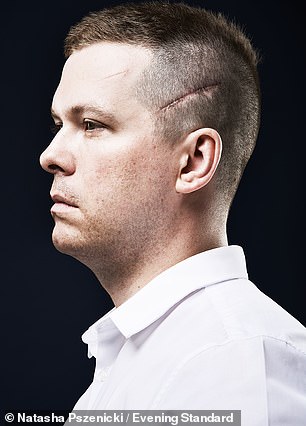 Pictured: The officer PC Outten (left) and (right) his injuries following the incident in Leyton

‘PC Outten then moved his left hand to the defendant’s throat in order to incapacitate him so he could get him out of the van to handcuff him. He told the defendant to ‘stop fighting, stop resisting’.

‘The defendant can be heard on those body worn video recordings making guttural sounds before he started to hack at PC Outten with a machete that he had retrieved from somewhere inside the van.

‘The blows themselves cannot be seen on the body worn camera recordings, but we suggest there are at least four audible chopping blows that you can hear, and we say they are quite shocking before PC Outten realises what has happened to him, can be heard to call out ‘Machete, machete’ as he retreated from the driver’s door while still facing the defendant.

‘PC Brooks immediately backed away. It was at that PC Outten reached for his Taser and pointed it at the defendant, who sprang out of the van and pursued the officer while aiming further blows at him with the machete that he had in his right hand.

‘Two members of the public, were watching events at street level, and saw the defendant attacking PC Outten with the machete after he had exited his van.

‘Another eye-witness, who was watching from a first floor flat overlooking the scene, saw the defendant run towards PC Outten and strike him on the arm with the machete.’

Mr Rees added: ‘Despite the nature of the attack, PC Outten managed to retain and operate his Taser.

‘The first shot failed to incapacitate the defendant, but PC Outten somehow managed to fire a second shot as he was falling to the ground and the defendant was launching himself at the officer, plainly aiming a further blow with the machete at his head.

‘This second shot did hit the target and the defendant fell to the ground and was rendered immobile by the subsequent electrical discharge.’

‘Despite the ferocity of the attack, and the seriousness of the wounds he had already received, PC Outten somehow managed to keep hold of and operate his Taser weapon which disabled the defendant and brought the attack to an end,’ said Mr Rees.

‘The prosecution suggest that had he not managed to fire his Taser, his injuries could have been far worse and even fatal.’

‘Members of the public provided first aid to the officer and one indeed kicked the defendant to the head as he tried to get up.’

Rodwan claims he acted in self-defence and said in interview ‘the officer attacked me.’

Rodwan, of Luton, Beds, denies attempted murder, an alternative of wounding with intent and possession of an offensive weapon. The trial continues.