This is the sweet moment Union J heartthrob JJ Hamblett’s three-year-old son took his first steps after having his second brain surgery.

The little boy was recently diagnosed with a rare brain condition although the singer and his girfriend have not revealed the root cause of his illness.

In the adorable one-minute clip, a nurse helps to hold Princeton upright as Caterina encourages him to come towards her.

As he slowly puts one foot in front of the other, he defiantly tells his mother ‘I’m going to try it all by myself.’

‘In the past five months Princeton has been diagnosed with a rare brain condition that had caused him needing two life changing brain surgeries and multiple stays in and out of the hospital,’ his mother told Newsflare. 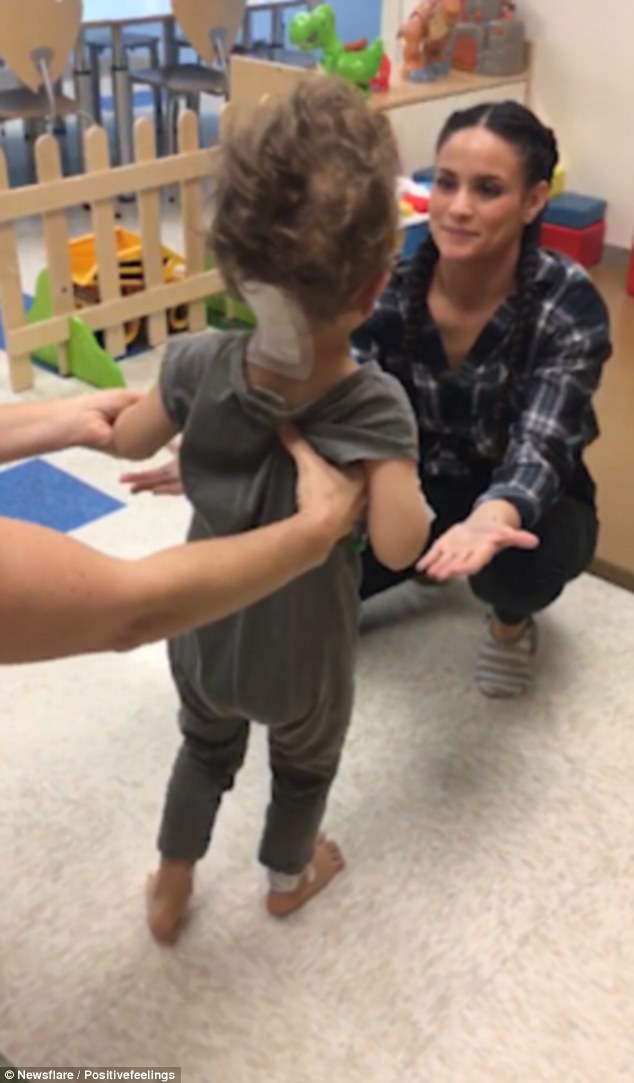 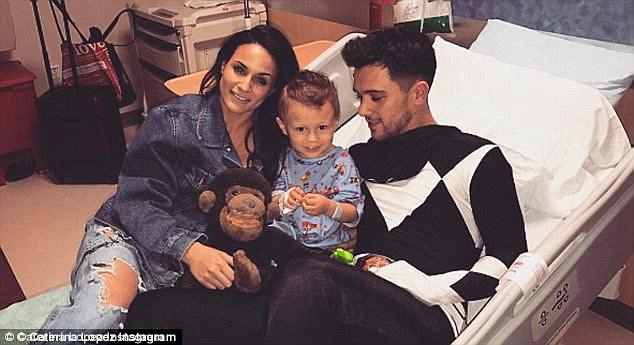 ‘Miracles’: Despite not stating the root cause of his illness, Caterina revealed on social media that Princeton was admitted to hospital earlier this year

In March, another video emerged of JJ surprising Princeton in Power Rangers fancy dress after not seeing him for eight months while he was touring.

The London based singer, 28, pulled out all the stops and made the transatlantic trip to Arizona, USA to pay him a visit.

He surprised the youngster at hospital, after he was admitted earlier that month. 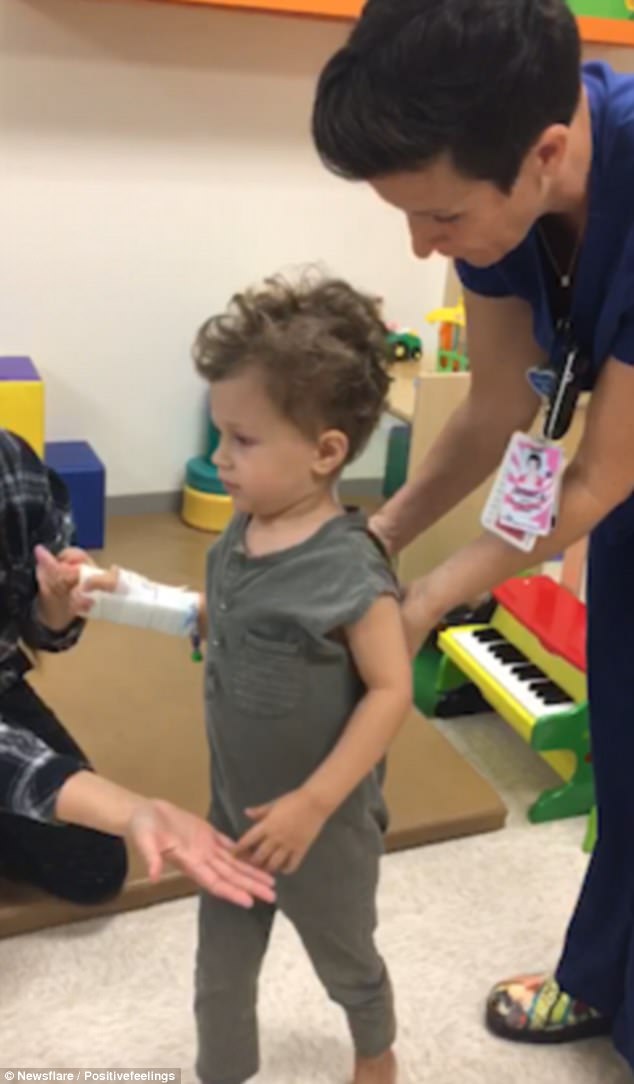 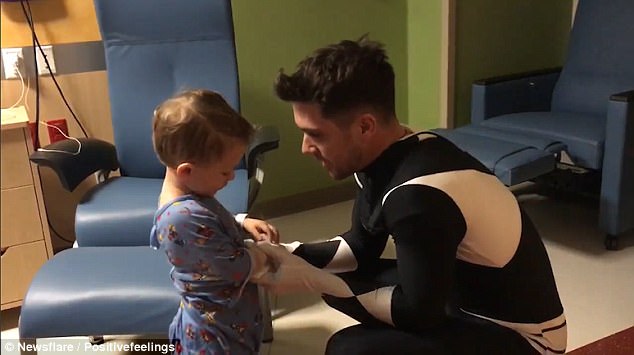 Daddy’s here! Eight months proved too long for JJ Hamblett, 28, to go without seeing his adorable three-year-old son Princeton as he made the transatlantic trip to Arizona, USA to pay him a visit

Brain surgery in children is normally a result of a brain tumour, but youngsters can undergo gruelling operations for other conditions.

It is an option for children with epilepsy, with surgeons putting them under the knife in a bid to stop their seizures.

Surgery is also an option for children with hydrocephalus – a build-up of fluid inside the skull which can be deadly.

The lovely video, which is filmed by US based Caterina – saw JJ entering the room in the skin-tight get-up, based off the 1993 debuted live action superhero show.

His young son, still unaware as to who it is, runs up to give him a hung, before the X Factor star struggles to take off his mask.

Crouching down, the heartthrob picks away at the top of the costume, before a female pal lends him a helping hand – all documented by the model.

After his face is finally unveiled, young Princeton stares at JJ for a short while, before stating, ‘Daddy!’ – after being asked by his mum who it is. 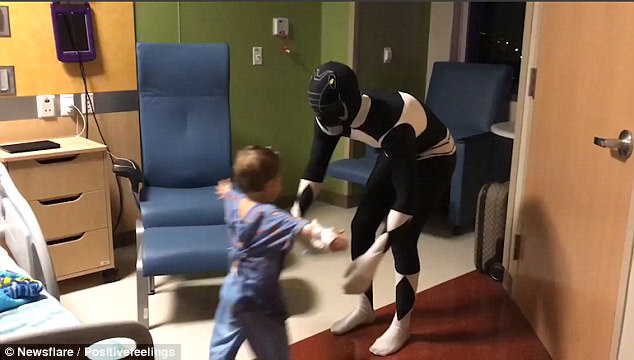 Pulling out all the stops: The Union J star donned a Power Rangers costume as he surprised the youngster at hospital, after he was sadly admitted earlier this month due to a yet to be announced illness

In a heartwarming moment, he quickly runs into the arms of the Carry You hit-maker, and the duo embrace in a tight hug.

Sharing the video on Instagram, Caterina wrote: ‘Princeton immediately ran to his dad who he hadn’t seen for eight months as JJ Hamblett is based in London and just finished up a tour with his boy band Union J.’

‘Only the video can truly capture his adorable reaction when he realises it’s actually his father under the costume,’ she added. 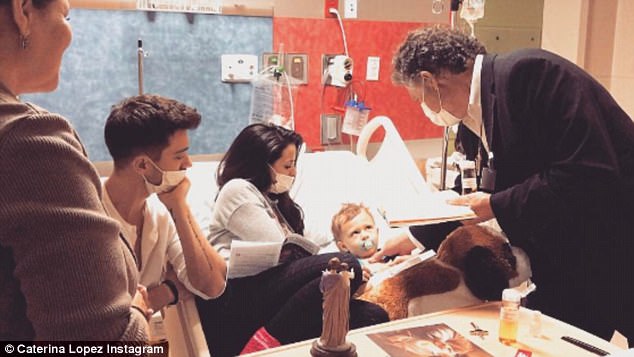 ‘Toughest time in our lives’: A number of sweet snaps show the youngster in fighting spirits- proving he’s on the road to recovery