Unionized catering workers to demonstrate across 16 major airports, including JFK, O’Hare, and LAX

Thousands of airline catering workers plan to stage protests at 16 of the busiest airports across the country on Tuesday as three million passengers are set to make an early jump on the Thanksgiving holiday weekend.

UNITE HERE, a labor union which represents 300,000 workers in the hotel, airports, gaming, and food service industries, says the protests are aimed at pressuring American Airlines to boost wages and provide health benefits.

The demonstrations are not expected to have an impact on flights.

Airline catering workers say that American, which reported $1.9billion in profits last year, is the target of protests because the company determines wages and conditions through subcontractors LSG Sky Chef and Gate Gourmet.

Sky Chef, which was once a subsidiary of American Airlines, was bought and merged into LSG Sky Chef in 2001.

UNITE HERE, a labor union representing airline catering workers, will stage demonstrations at 16 airports nationwide on Tuesday. The above image is an undated file photo of a previous protest in San Francisco

This past summer, three unions representing more than 25,000 catering workers who serve customers aboard American, Delta, and United flights voted overwhelmingly to strike.

But the unions are currently negotiating with the airlines through the National Mediation Board, a federal agency that must legally grant permission to UNITE HERE to strike.

UNITE HERE says that it will strike as soon as the agency releases it from mediation.

Instead, he says the goal is to raise public awareness of the workers’ conditions.

‘We do want to get a message out. Our goal is to bring to light what’s going on with the plight of workers.

‘We’re trying to say that airline companies make billions and we want a piece of the American dream.’

Taylor said that even though American Airlines doesn’t directly employ catering workers, it has the power to improve wages and benefits.

‘You can’t take on every airline,’ Taylor said.

‘You have to deal with the largest. If American agrees that helps overall.’

The airline, for its part, says it is hopeful an agreement can be reached.

‘American Airlines respects and supports the rights of workers to join a union and bargain collectively – in fact, 84 per cent of our team members are represented by unions,’ American spokesperson Josh Freed said.

‘We believe in the collective bargaining process,’ Freed said.

‘We understand that a new contract will, ultimately, increase the costs to customers, including American.’ 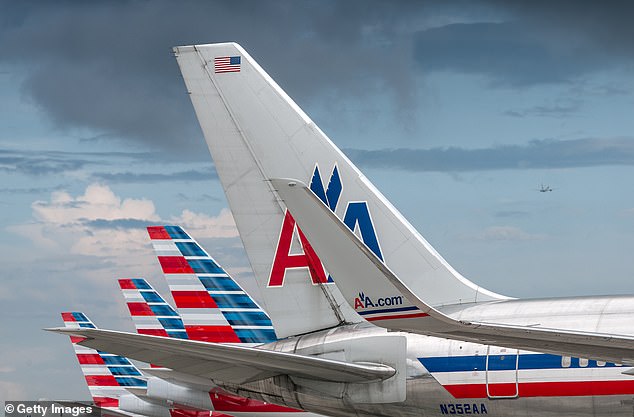 Reps for Gate Gourmet and LSG Sky Chefs said that while progress is being made in federally mediated talks, they criticized the union’s tactics.

‘We have talks scheduled in December and expect to reach a fair and competitive agreement at some point through continued federal mediation, as we have in the past,’ said Gate Gourmet spokeswoman Nancy Jewell.

‘Gate Gourmet has made significant improvements for our people in wages and benefits across the US,’ Jewell said.

‘We are disappointed by the union’s unreasonable and unaffordable demands for wage increases and medical benefits which hinder the long-term sustainability of our industry, create unrealistic expectations and delay progress.’

A spokesperson for LSG Sky Chefs told Forbes: ‘Our negotiating team and a federal mediator have been working since May 2019 to negotiate in good faith with the union representing our employees.

‘Our company has offered improvements in wages and is discussing numerous other issues covered by our collective bargaining agreement.

‘We feel progress is being made with the help of the federal mediator.

‘We remain committed to negotiating in good faith, and we hope that union members will act lawfully as they exercise their right to demonstrate or protest.’

UNITE HERE says that between 200 and 1,000 workers will be protesting at airports in 16 US cities on Tuesday.

UNITE HERE says that out of 4,100 Sky Chefs serving American Airlines at the company’s hubs, 30 per cent are uninsured while 35 per cent need government-subsidized health care for themselves or their children.