United Nations environment boss is slammed for flying too much

The United Nations environment chief has been criticised by his own organisation for his globe-trotting lifestyle and heavy carbon footprint.

Erik Solheim reportedly ran up a huge travel bill and showed scant regard for rules, according to a leaked draft internal audit report.

The damning dossier said Mr Solheim was travelling for 529 out of the 668 days covered by the audit investigation.

As executive director of the UN Environment Programme he also spent a total of £370,380 during the same period.

The audit said he had ‘no regard for abiding by the set regulations and rules’ and had been guilty of claiming unjustified expenses.

There have been concerns from some UN Environment officials that Mr Solheim has been guilty of employing a ‘haphazard and dictatorial management style’ and has made the body ‘dysfunctional in many respects’.

Mr Solheim said he had already paid back money where there had been ‘oversights’ and made changes where rules had been broken.

The former Norwegian politician refused to comment in detail until the audit had been published in full, but he said that if there were other matters to address he would do so in the future.

‘To secure unprecedented environmental action, we need to change, as individuals, as society, indeed as the UN,’ he said. ‘No one is immune to the difficulty that type of systematic change often brings.’

The draft audit, which was given to The Guardian newspaper, was compiled by the UN Office of Internal Oversight Services and has still to be finalised.

One of the major criticisms Mr Solheim faced was for a weekend trip he took from the US to France and back.

According to the UN, his ‘extensive travel patterns’ did not set an example to the rest of the UN staff to follow.

The report added that his ‘extensive travel’ was a reputational risk to the UN because the organisation was supposed to be ‘the lead on sustainable environment matters’.

It said the UN Environment Programme did not have policies and incentives for staff to reduce their carbon emissions.

In August Mr Solheim told a Norwegian aviation magazine that people should not have a ‘guilty conscience’ about flying and even admitted to holding gold frequent flyer cards with three major airlines. 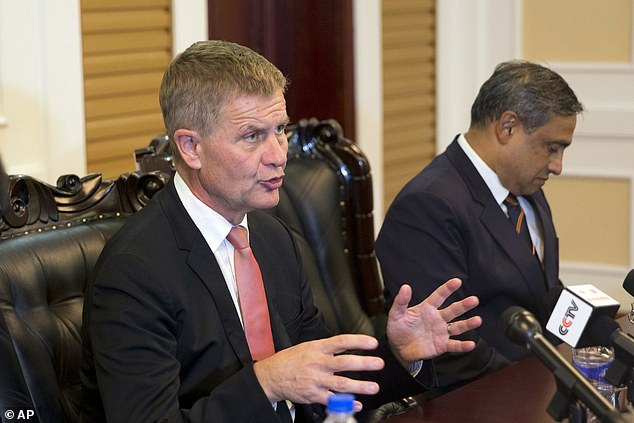 Mr Solheim, 63, is a former diplomat and was leader of the Socialist Left Party in Norway between April 1987 and May 1997. The married father-of-four took up his current role with the UN in June 2016.

The leaked document also criticises Mr Solheim’s management style and said he showed ‘willingness to circumvent regulations and rules which were termed as “bureaucratic”’.

Even his expensive travel had been approved by a manager who reported directly to him and was not someone more senior.

In future Mr Solheim’s travel will be approved by the office of the secretary general.

In one spat involving the number of days he had spent in Oslo and Paris on ‘official travel’ he replied in an email: ‘We cannot accept this question on holiday vs job… we are not any longer living in the industrial age and they must stop treating me as if I am factory worker… the other side of this coin is that they must stop asking this stupid question.’

Mr Solheim told The Guardian: ‘It’s true that I have vented frustration with what I perceive as excessive bureaucracy in the UN system. I believe in fully reforming the UN so we’re better able to confront the urgent challenges facing our planet.’

Truls Gulowsen, the head of campaign group Greenpeace in Norway, said: ‘This report puts him in an extremely bad light and weakens the credibility of the UN’s entire environmental organisation.’