Universal Studios Orlando theme park will reopen to the public at reduced capacity on June 5 after shutting down during the coronavirus pandemic, the company said on Thursday.

Universal Studios is the first of the major theme parks in Florida to announce reopening plans.

Walt Disney, which owns Disney World, reopened the Disney Springs shopping area in Orlando on Wednesday, but the theme park remains closed and no date has been announced to reopen it to the public.

A graduate wearing a cap, gown and a face mask poses for a photograph at the Universal Orlando’s CityWalk. Universal’s theme park will reopen on June 5 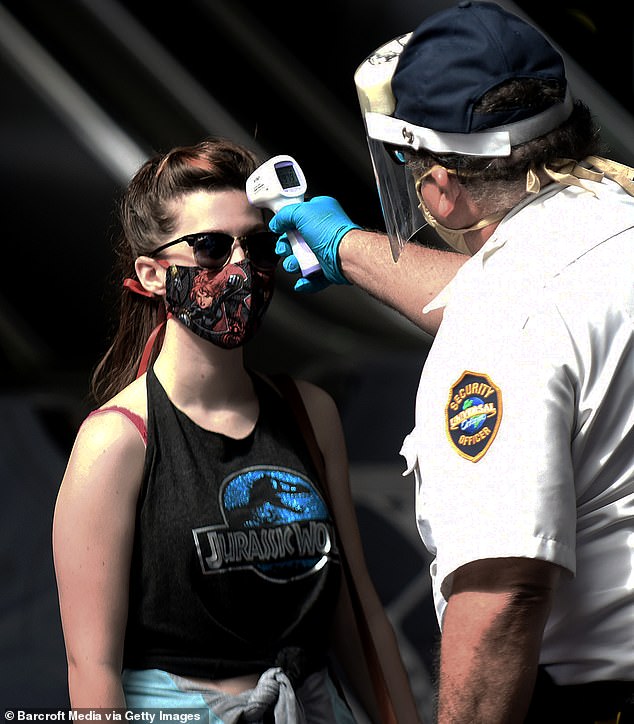 Sprouls also said that the theme park will close interactive play areas for children in an effort to reduce physical contact between visitors.

Meanwhile, Walt Disney World cracked open its doors on Wednesday, offering dining and shopping to masked customers but leaving the beloved rides closed, as Florida begins to slowly get back to business after a coronavirus lockdown.

As the park welcomed people to the Disney Springs shopping strip in Orlando, the new reality of life in the COVID-19 era was stark.

Parking was limited, barriers have been erected to encourage social distancing, visiting hours have been reduced and staffers repeatedly disinfected high-touch surfaces. 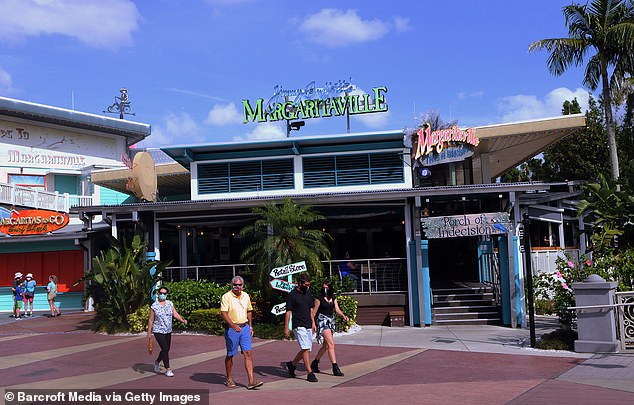 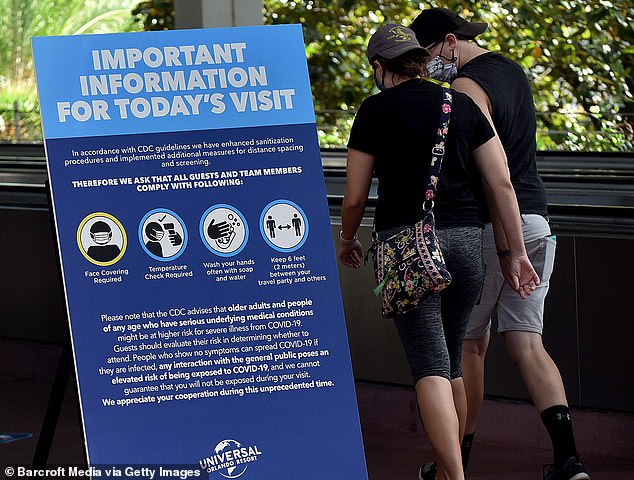 A sign explaining the requirements of face coverings, temperature checks, and social distancing greets guests as they approach the entrance to Universal Orlando’s CityWalk

People were asked to undergo temperature checks as they entered, and face masks are mandatory – grim stuff for ‘the happiest place on Earth.’

Also posted on the Disney Springs website is this warning: ‘COVID-19 is an extremely contagious disease that can lead to severe illness and death.’

‘By visiting Disney Springs, you voluntarily assume all risks related to exposure to COVID-19,’ it adds.

As part of Florida’s phased reopening following a virtual economic shutdown in mid-March to curb the spread of the virus, more restaurants and bars will open up next week.

But there is no date yet for the reopening of Disney World. Most beaches in south Florida also remain closed.

‘Today’s world is different, and it’s going to require a shared responsibility, with everyone doing their part,’ Disney Springs vice president Matt Simon wrote in a blog post.

Florida began to slowly reactivate its economy two weeks ago in an uneven manner, with different rules in the state’s dizzying patchwork of counties and cities.

As of Thursday, Florida had officially reported more than 47,000 novel coronavirus cases, and more than 2,100 fatalities, with the number of new cases daily starting to drop.

In some cases, residents from out of state are not being included in the tally, and in others, the victim’s cause of death is attributed to underlying conditions, according to press reports.

Florida’s first phase of reopening does not include hotels, gyms, bars or movie theaters.

The theme park will reopen at reduced capacity on June 5.  Masks will be mandatory, and the park will initiate staggered parking lots, temperature checks and mobile food ordering.

Disney executive George Kalogridis said Wednesday that the company is considering reopening parks with 20 to 30 per cent capacity. ‘A lot of it has to do with guest behavior as much as it has to do with Disney operations’, he said.

The theme park has submitted plans to the governor to reopen and expects to resume operations sometime in June. The park will need two to four weeks to prepare once approvals are given.