Australian universities have been warned against relying too heavily on Chinese and international students to keep their coffers full.

Several federal coalition MPs have expressed concerns about the potential of foreign interference at Australian universities from forces such as the Chinese Communist Party.

They included Liberal MP Dave Sharma who said he is worried that ‘some universities have become a little too dependent on foreign university students as a source of revenue’.

Education Minister Dan Tehan has expressed the sentiment, after one of his colleagues said he believes some universities are too dependent on international students for their livelihood

It’s for this reason that federal education minister Dan Tehan has disagreed with his colleague, but admits universities shouldn’t focus on students from China alone.

‘I don’t think that we have to be too concerned about the fact that we do have foreign students coming to Australia, participating in our higher education sector,’ Mr Tehan told Sky News on Sunday.

‘They bring a diversity to student life on our campuses.

‘What we do have to ensure though, is to make sure that universities understand that the more diverse the student mix they have, the better secure their financial forecasts will be.

‘So the more diversity they can get, into their student mix, the better.’ 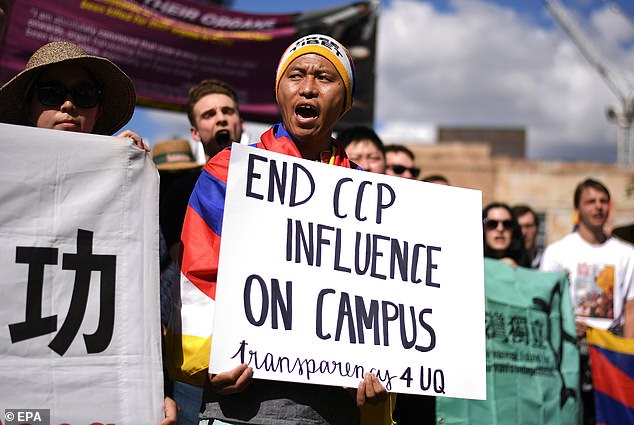 Several coalition MPs expressed concerns this weekend about the potential for foreign interference, including from the Chinese Communist Party, at Australian universities (stock image)

The government is currently working with universities on a best practice guidelines on dealing with the issue of foreign interference, and Mr Tehan said the sector understands how important the issue is.

But he stressed that along with making a contribution to campus life, international students add $35 billion to Australia’s economy.

‘With everything, we’ve just got to make sure that we get the balance right,’ he said.