A University Challenge contestant with a ‘thousand-yard stare’ is being tipped to be the star of the latest series of the show after he impressed viewers with his ‘fierce’ intellect.

Seoan Webb, who’s studying Ancient and Modern History at Oxford’s Corpus Christi college, wowed those watching Monday’s episode of the BBC2 academic quiz as he gained most of his team’s points after they conquered Bristol University 175 to 135.

Taking to Twitter, fans of the show hailed Webb as this series’ ‘stand-out’ contestant already despite it only being the second round of the student quiz.

After some commented on his awkward body language and deeply intense stare, one of his former teachers, from Elthorne High School in Ealing, asked viewers to ‘be kind’, saying her former student was a ‘phenomenon’.

Don’t mess! Oxford student Seoan Webb blew the competition out of the water in the latest episode of University Challenge, which saw his team defeat Bristol 175 to 135 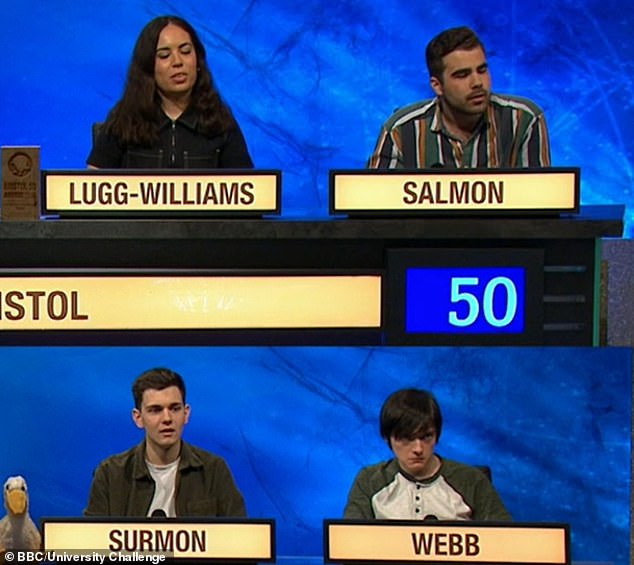 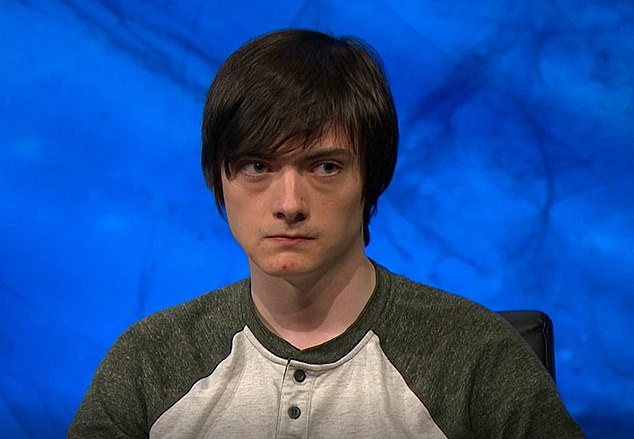 ‘The brightest student I ever taught’ One of Webb’s former teachers, from Elthorne High School in Ealing, asked viewers to ‘be kind’ saying her former student was a ‘phenomenon’ 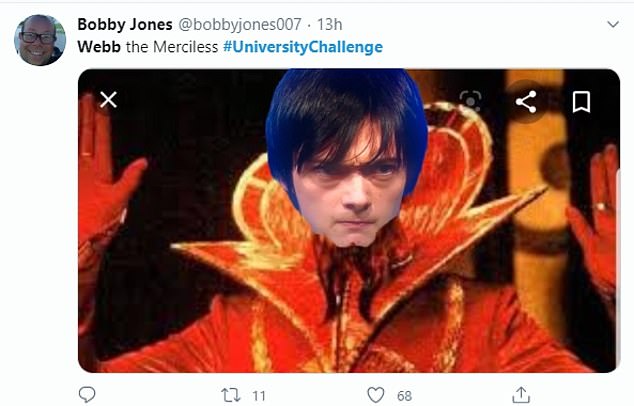 Despite his seemingly ‘merciless’ demeanour on the show, she added he was ‘the loveliest kid’.

London teacher @NikkiCDaniel wrote: ‘Seoan Webb is a phenomenon. The brightest person both Mark and I have ever taught and the loveliest kid. He is the real deal. Please twitter, be nice. Good luck #CorpusChristi’

Many were left in awe at Webb’s dominance of the episode, with his team-mates frequently heard saying ‘nominate Webb’.

@therussellmoore wrote: ‘Absolutely never tweeted about #UniversityChallenge before but Webb is the new Monkman but with advanced character flaws/backstory. Corpus Christi is powered by Webb’s thousand-yard stare.’

@CianDaAddick190 responded, saying: ‘He’s the kind of guy to defeat his haters with no mercy. His intelligence and speed is incredible. Very impressive.’ 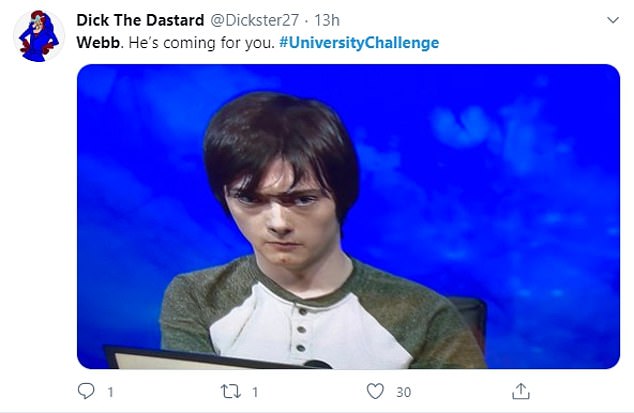 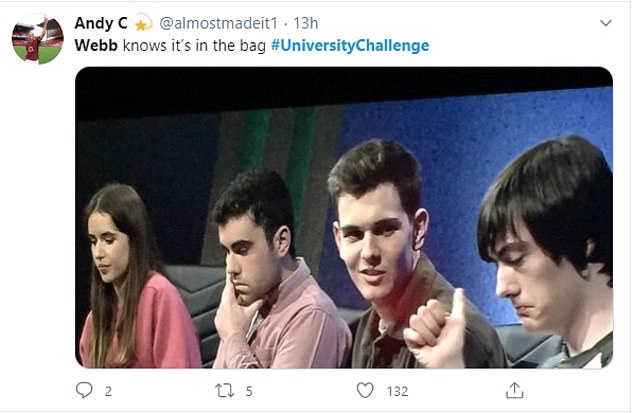 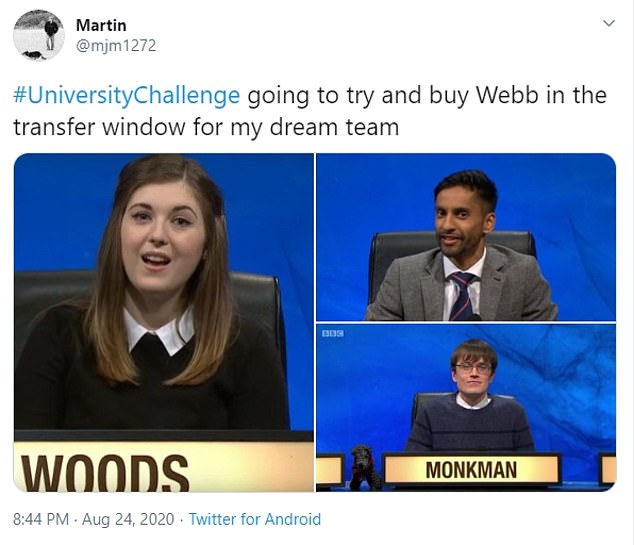 @Lolisa46 penned: ‘Just when we thought this years #UniversityChallenge was going to be character free along comes Webb and blows it out of the water. A twitter legend already!’

@LauraWright1000 noted: ‘Webb might as well be playing on his own’

Tricky questions correctly answered by Webb included: ‘Gloucester Cathedral contains the tomb of which Plantagenet king after his body was moved there in the 14th century from Berkeley Castle, the place of his death?’ 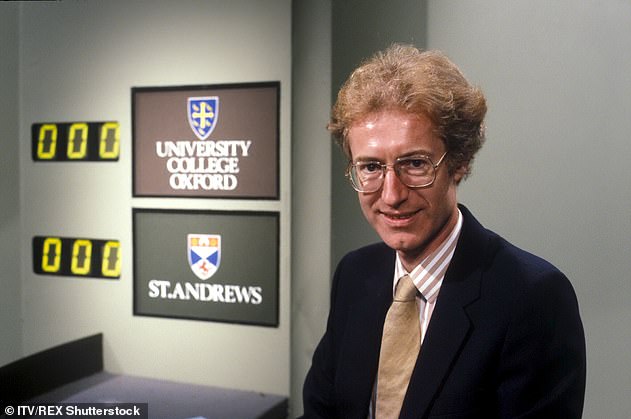 Jeremy Paxman’s predecessor, Bamber Gascoigne, presented the programme for 25 years until 1987. He was known for his smart attire, fluffy blonde hair and spectacles 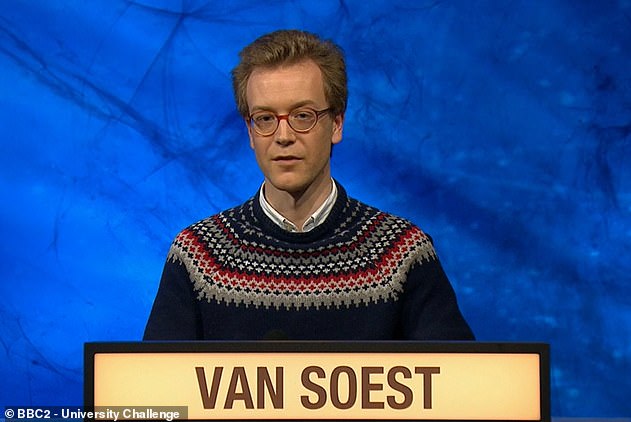 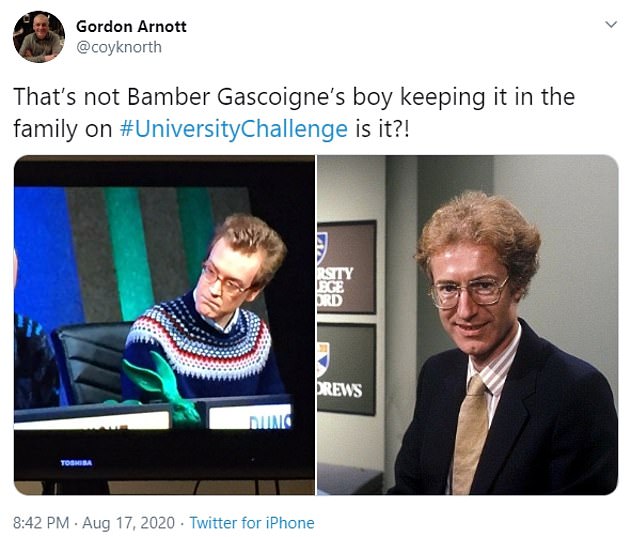 During last week’s episode, long time viewers of University Challenge did a double take when tuning in, after one of the contestants appeared to bear an uncanny resemblance to the show’s former host Bamber Gascoigne.

After Belgian contestant Van Soest introduced himself on Cambridge University’s Clare College team, Twitter quickly sparked up with comments suggesting he was a dead ringer for Paxman’s predecessor.

@iankm888 joked: ‘Great to see Bamber Gascoigne back on #UniversityChallenge’

@thebrianjenkins wrote: ‘I see a clone of Bamber Gascoigne is on #UniversityChallenge tonight.’