University forced to retract claim elderberries could treat the flu

An Australian university has been forced to take back its claim elderberries could treat the flu because of a dubious arrangement with a pharmaceutical company.

The University of Sydney published an article saying its research showed the berries had antiviral properties but later admitted it had no evidence to prove that.

And the university has since been accused of overselling the research after taking money from Pharmacare, a multinational company selling elderberry health products.

One expert said the way the university publicised the research was an ‘appalling misrepresentation’ of the science behind it.

One expert said the way the university publicised the research, funded by Pharmacare, a multinational company selling elderberry health products, was an ‘appalling misrepresentation’ of the science behind it

The claims of elderberries’ ability to fight influenza was picked up by major news sites including Fox News and the Melbourne newspaper, Herald Sun.

An original news article on the university’s website has now been removed and a vice chancellor admitted staff ‘should have been clearer’ about its research.

The blunder was revealed in an investigation by the Sydney Morning Herald.

A claim elderberries could cure flu in sick people was based on tests done on human cells in a lab but it wasn’t obvious that no human or mouse tests had been done, admitted acting deputy vice-chancellor Professor Laurent Rivory.

Staff at the university allegedly told the Herald there was ‘no evidence’ to support the news article’s claim.

Trials on human patients would have been needed to confidently make the claims in the university’s press release, Professor Rivory said.

In a quote on the university website in April, one of the researchers, Dr Golnoosh Torabian, said: ‘What our study has shown is that the common elderberry has a potent direct antiviral effect against the flu virus.’

And lower down, the article said: ‘For medicinal benefits, elderberry extract is available commercially in tablet or syrup form.’

Pharmacare, which funded the research, makes a product called Sambucol.

Sambucol is a black elderberry extract syrup which claims to provide ‘strong immune system support’ – it is available worldwide and, in the UK, from Holland & Barrett and Waitrose for around £5.

After questioning from the Sydney Morning Herald and Melbourne newspaper, The Age, the university admitted there was not enough evidence to prove its flu claims. 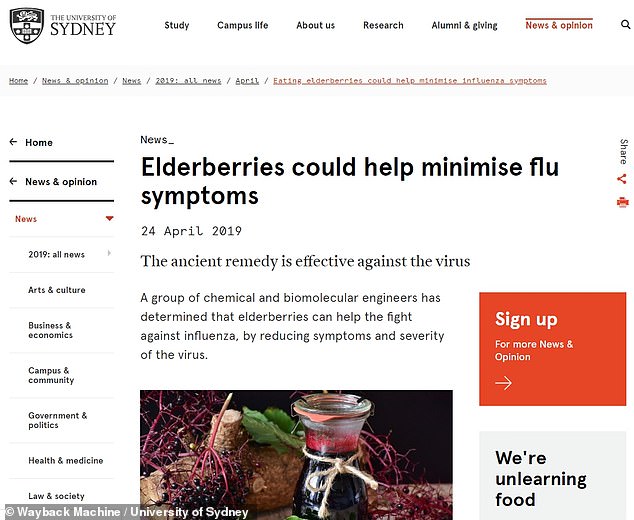 A claim elderberries could cure flu in sick people was based on tests done on human cells in a lab but it wasn’t obvious that no human or mouse tests had been done (Pictured: An archived view of the page from April 26, 2019) 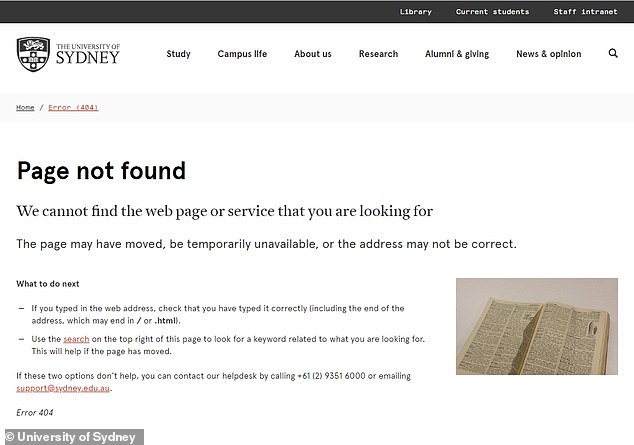 The article revealing the research has since been removed from the University of Sydney’s website (Pictured: A view of the page today) 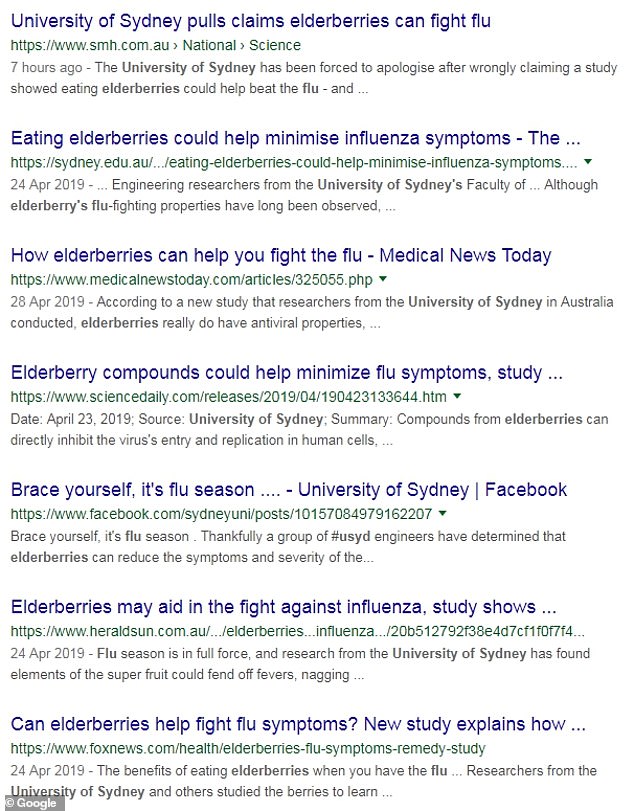 WHAT DID THE NEWS ARTICLE SAY?

The news article posted on the University of Sydney’s website on April 24, 2019, began with a sub-heading which said: ‘A group of chemical and biomolecular engineers has determined that elderberries can help the fight against influenza, by reducing symptoms and severity of the virus.’

The actual study paper, published in the Journal of Functional Foods, did not report any findings to suggest elderberries could reduce flu symptoms.

It said its findings – that an elderberry supplement could inhibit flu virus activity in human cells in a lab – backed up past research which studied symptoms.

The news article said elderberry could ‘help strengthen a person’s immune response to the virus’.

Later on in the article the university added: ‘For medicinal benefits, elderberry extract is available commercially in tablet or syrup form.’

At the end of the journal study the researchers declared they had received funding from Pharmacare, and said no animal or human testing had been done – but neither caveat was repeated in the press release on the university website.

The university has now launched an investigation into the scandal and said it would in future make commercial funding more obvious to readers.

‘This is an appalling misrepresentation of this Pharmacare-funded in-vitro study,’ Ken Harvey, president of the Friends of Science in Medicine, told the Morning Herald.

‘It was inappropriate and misleading to imply from this study that an extract was “proven to fight flu”.’

The University of Sydney’s Professor Rivory said: ‘The accurate reporting of our research is crucial.

‘It should have been clearer in the media release that the research didn’t involve the human consumption of elderberries and that more research was required before the full impact on humans could be determined.

‘There was no attempt to hide the funding source from the media.

‘The authors included Pharmacare among its financial contributors in the published paper, which is publicly available online and a link to this paper was included in the final media release.’

He added Pharmacare’s cash contribution to the research made up less than one per cent of the funding used.

The research was published in the Journal of Functional Foods.

MailOnline has contacted the University of Sydney and Pharmacare for comment.