A boy aged six who fell into a river on a fishing trip yesterday is ‘unlikely’ to be found alive, the police officer leading the search has said.

Lucas Dobson fell into the River Stour in Sandwich, Kent, on Saturday afternoon, while out with family members.

A huge group of volunteers are helping search and rescue teams as they look for the missing six-year-old.

Lucas plunged into the water in Sandwich at around 1.20pm on Saturday and his father jumped in shortly afterwards.

Superintendent Amanda Tillotson from Kent Police said more than 100 members of the emergency services and some 200 volunteers have been taking part in what she said is a ‘massive operation’.

She said: ‘I’ve just come from speaking to the family myself, and they wish to pass on their absolute gratitude for everybody, and they’re overwhelmed at the amount of people that have come out to help and search for Lucas.’

Asked how likely a positive outcome is, she told the PA news agency: ‘Obviously as time has gone on now I think it is unlikely, unfortunately. 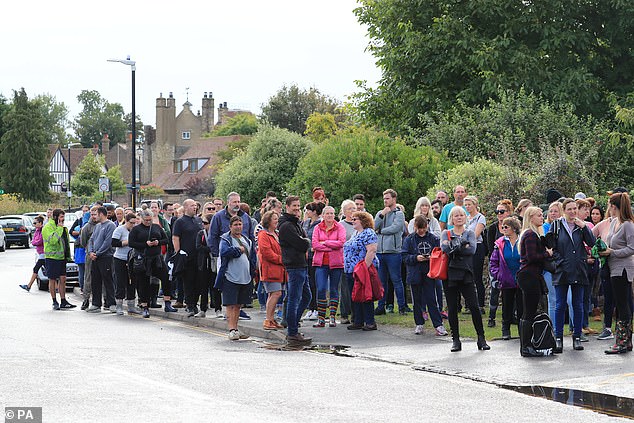 A huge group of volunteers are helping search and rescue teams as they look for the missing six-year-old. 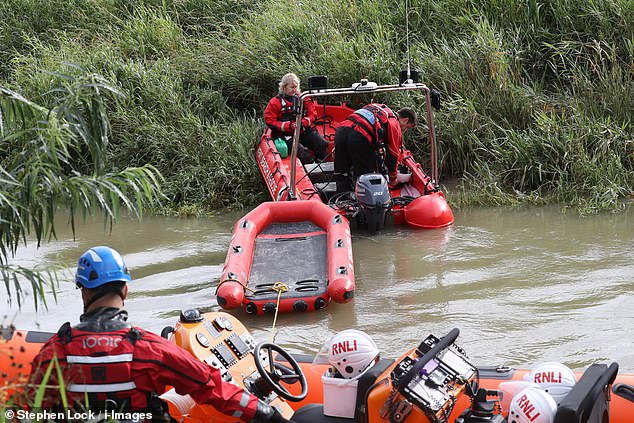 The rescue team were out in dinghies from dawn this morning as the search carries on to the second day. Superintendent Amanda Tillotson from Kent Police said more than 100 members of the emergency services and some 200 volunteers have been taking part in what she said is a ‘massive operation’

‘But, we will continue to search and obviously I would like to have a positive outcome, I would like to find Lucas, we are getting increasingly concerned with the amount of time that is going on now.

‘But it is really important that we continue to search for Lucas and continue to do that for the family, and my heart goes out to them, it really does.’

She said the search team was working hard ‘to bring a quick resolution and find Lucas as quickly as we can for the family’, adding: ‘This is an awful, tragic incident.’

He plunged into the water in Sandwich at around 1.20pm on Saturday and his father jumped in shortly afterwards.

Ms Tillotson said there are dive units still searching the river area, along with specialists from other agencies, and that the current focus of efforts is centred near to where the incident happened. 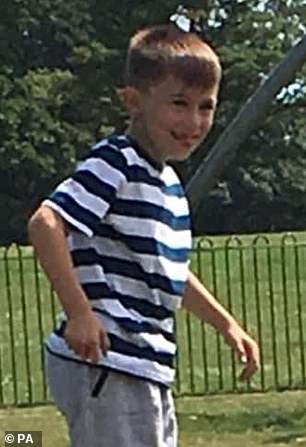 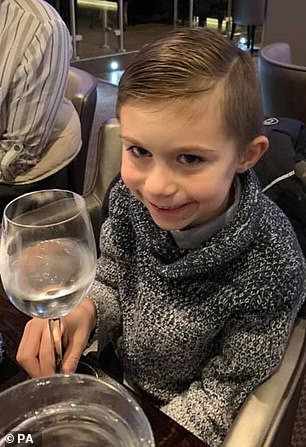 Lucas Dobson, six, fell into the water at 1.20pm yesterday while on a ‘family fishing trip’ 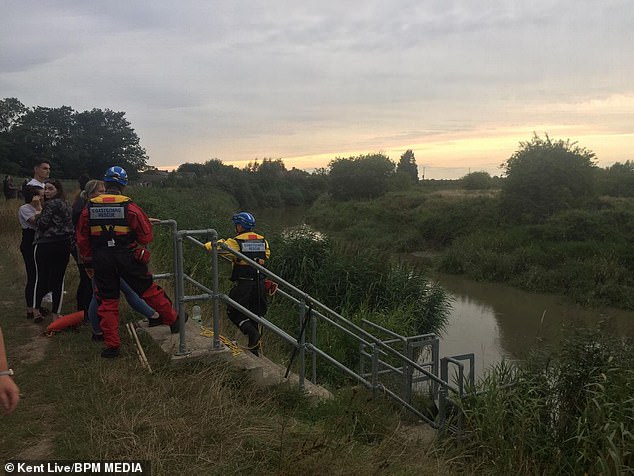 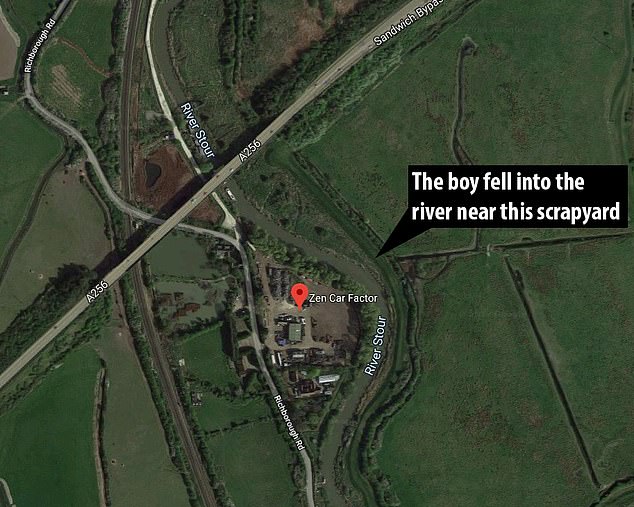 The search for Lucas continues. Police have searched the surrounding riverbeds as well as the scrapyard near to where he fell in

A huge group of volunteers helped specialist search and rescue teams until darkness fell over Sandwich on Saturday night.

The search resumed at dawn today as hundreds of volunteers again turned out to support police, fire and specialist teams scouring the river in driving rain.

Maciee Stanford, Lucas’s aunt told Kent Online: ‘He was with his Dad and his Dad’s friends along with other children. The incident happened because our Lucas was on the jetty and tried to step from there onto the boat but he fell in between the jetty and the boat. 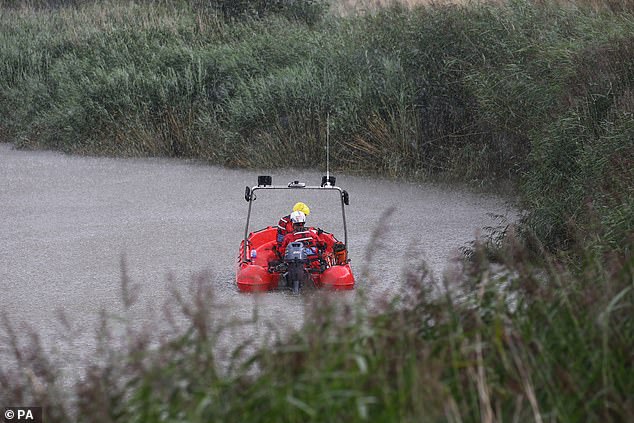 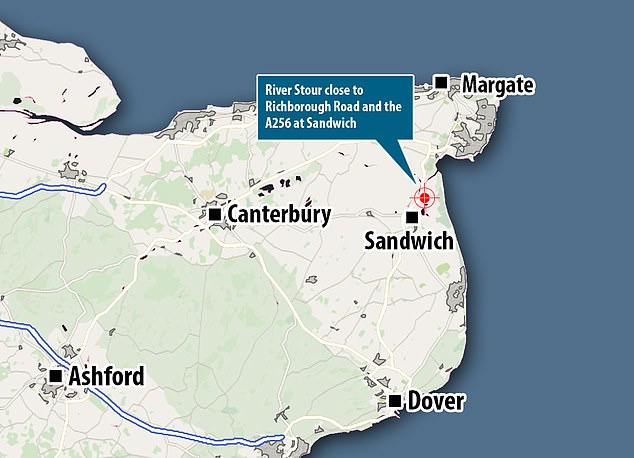 The River Stour is a river in East Anglia. It is 47 miles long and forms most of the county boundary between Suffolk and Essex

‘As soon as he fell, the three adults jumped in after but the current was too strong; he had already gone. In the short amount of time he could not be found. The current was so strong the three men could barely swim in it.

‘They fish and do this regularly as it is behind one of the men’s houses – all the children play together here.’

Ms Stanford said Lucas, from Deal, can swim but his family worry he would have been too scared to do anything.

The public have been urged to keep their search within a half-mile radius and Kent Fire and Rescue Service said they have been overwhelmed by the help. 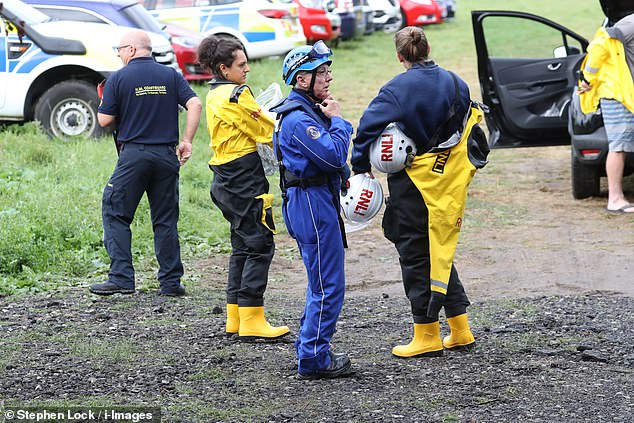 A team of divers prepares from the RNLI prepares to go into the River Stour in the rescue effort for missing Lucas, six

‘We’ve again been inundated with offers of support – Thank you.’ Kent Fire and Rescue Service said in statement.

‘Unless you attended the briefing at Sandwich fire station and are aware of how you can help at this time, we would really encourage you to remain safe away from the area. We have a lot of help – thank you.’

The town has rallied round in the massive search operation. St Mary’s Church offered their supporting making teas and coffees free of charge for volunteers and opened up the hall for weary searchers to rest before heading back out.

A fish and chip shop also offered free fish and chips to volunteers. The River Stour, which can have a current of up to 10mph, is a river in East Anglia. It is 47 miles long and forms most of the county boundary between Suffolk and Essex.

Anyone who wishes to report any details regarding the incident should call Kent Police on 101 or 999 in an emergency.