At a global summit in Nairobi last December, I held aloft a copy of the Daily Mail with a front page headlined ‘Let’s turn the tide on plastic’.

I told the thousands of delegates at the gathering that ‘one of the most widely read newspapers in the world, is putting the message out and this is really positive, really fantastic.’

I was delighted to highlight the Mail’s work as an example of powerful campaigning that can inform international action on the plastic crisis.

Last December, at a global summit in Nairobi, the Head of UN Environment showed the thousands of delegates the front page of the Daily Mail

I am certain that this kind of potent journalism helped to build the mood of determination at the Nairobi summit, where representatives of more than 100 countries subsequently signed a pledge to eliminate plastic pollution from the oceans.

Raising public awareness is central to the fight against the global scourge of plastic pollution. Through effective campaigns, people begin to recognise that this is not some distant, abstract issue but one of direct, immediate relevance to their own lives.

After all, no holiday-maker wants to find beaches strewn with plastic debris. No consumer wants to order fish and chips in the knowledge that their portion of cod could be full of plastic fragments.

Popular support makes real change possible as people are compelled to think about the negative impact of their daily habits.

That is why today I would like to pay heartfelt tribute to the Mail, which has been at the forefront of the drive to tackle this gigantic problem.

With its huge readership and unique position at the heart of British cultural life, over the past ten years the newspaper has used its influence to make a real difference. 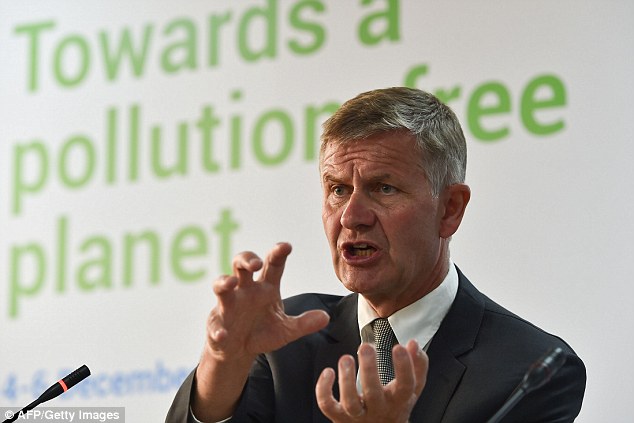 Thanks to the Mail, the subject of plastic waste has been brought into people’s homes, made the focus of kitchen table conversations and pushed right up the political agenda.

Indeed, the Mail’s lobbying over the past decade, has had a profound impact in Britain, as reflected in the charge on single-use plastic bags.

Introduced in 2015, this has been a hugely successful measure that led to an 85 per cent reduction in usage within six months.

J ust as important was the Mail’s successful demand for a ban on plastic microbeads — which are used in many cosmetics and personal products — because of the severe harm they cause to marine life.

From last month, the manufacture of these microbeads has been outlawed, with a ban on sales to follow in July.

But there is still much work to do. The war on plastic contamination has only just begun — and the scale of the task is truly daunting.

As I said in my speech in Nairobi: ‘Pollution is the biggest killer on the planet, and we need to defeat it.

We are facing an ocean Armageddon. Every year we are dumping at least eight million tonnes of plastic in the ocean.’

The fact is that if the current trend continues, then by 2050, the amount of plastic in the sea will be more than the entire combined weight of fish.

And yet already, we can see all around us the disastrous consequences of decades of irresponsibility and thoughtlessness. Wildlife — and therefore the entire ecosystem — is suffering grievously. In my home country of Norway recently, a stranded whale died after ingesting no fewer than 30 plastic bags.

There is, tragically, mounting evidence that plastic micro- particles are an integral part of the diet of shellfish, while turtles can no longer dive properly because eating plastic gives them gas which interferes with their natural buoyancy. Nowhere on the planet seems to be safe from this toxic flood.

During a visit to Mumbai in India, I saw for myself how the golden sands of Versova beach were covered in plastic.

The extent of the degradation prompted a local lawyer, Afroz Shah, to start organising weekly beach clean-ups, carried out by an expanding army of volunteers. Incredibly, since the clean-ups began in October 2015, more than 7,000 tonnes of litter have been collected.

But even the most remote parts of Earth are affected. During the latest Volvo Ocean Race, the triennial round-the-world yacht competition, sailors saw lumps of polystyrene floating between the icebergs near Antarctica.

The painful reality is that our seas — from British coastal waters to the depths of the Mariana Trench in the Pacific Ocean, 36,000 feet below the surface — are slowly but surely being transformed into a plastic soup.

As the Mail campaign so rightly declares, we have to turn the tide.

The creeping degradation of the planet simply cannot continue. But beach clean-ups and plastic bag charges are not enough.

More drastic steps are needed. Consumers can play their part by altering their lifestyles. They can, for instance, stop using plastic straws or take-away cups. They can recycle more or challenge retailers over the use of excessive packaging.

The companies involved, acutely sensitive to market forces, will soon get the message and act accordingly.

National Governments and international bodies including the United Nations have more scope for action through leverage such as charges and statutory bans.

The dumping of plastic in the oceans did not arise because of any wilful state or institutional policy, for no nation deliberately sets out to pollute the planet.

On the contrary, the practice has arisen through a combination of sheer laziness and an absence of coherent policy. It is time to rectify that absence with realistic measures — such as higher landfill targets and taxes — which impose greater corporate responsibility and radically improve recycling.

But ultimately the greatest change will come through a redesign of our whole production and retailing process, one that will put the future of the planet firmly at its centre.

This is not about a war on plastic itself. The product is one of mankind’s greatest inventions, which has transformed living standards, industry, global trade, medicine and technology.

Managed properly, plastic can be an ally of the environment. It eliminates food waste and is the source of new forms of renewable energy through its use in solar panels and wind turbines.

But the problem is that so much of the plastic we make is unnecessary or non-recyclable and simply ends up in the sea.

Global plastic production this year is estimated to be 360 million tonnes, potentially rising to 500 million by 2025 and a staggering 619 million tonnes by 2030.

Given those colossal projections, our consumer model has to change. We don’t need so many products, especially food, to be wrapped in plastic.

We do not require millions of plastic bottles a day when there are viable, recyclable alternatives.

Our throwaway society has become far too used to single use, easily discarded items. Moreover, too many goods have a built-in obsolescence so that we are forced to buy new versions.

Adopting a new, more responsible attitude will not be a cost. It will be an investment in all our futures. At the present rate, we are gradually killing the oceans. No one wants such an outcome.

That’s why I believe that, with campaigning papers such as the Mail leading the way, there is a yearning to embrace change and save our seas. By harnessing this desire, together we can truly turn the tide on plastic.