A previously unseen photograph of Prince Harry and his new bride Meghan Markle has been spotted at Buckingham Palace.

The touching portrait of the newlyweds was spotted on display in the Audience Room of the Queen’s London residence.

The portrait of the couple in a loving embrace can be seen on the right hand side of the fire place of the living room where she hosts her weekly audience.

It is the first photo of Meghan to appear in Buckingham Palace and it sits alongside Her Majesty’s other treasured photographs of her grandchildren and great-grandchildren.

The photograph sits pride of place at the front of the table and sees Harry dressed in a blue suit facing Meghan who is wearing in a figure-hugging dress.

While it is unclear when and wear the photo was taken, Hello! reports is is likely to have been taken by the couple’s wedding photographer Alexi Lubomirski as part of their engagement shoot in December. 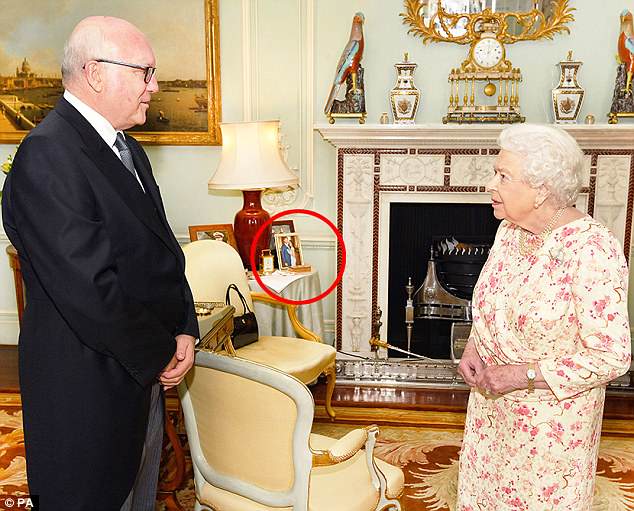 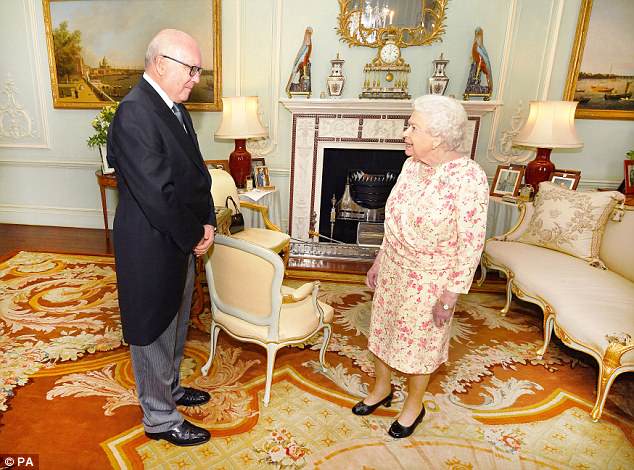 The Queen welcomed the Australian High Commissioner to the UK, during a private audience

The photo was spotted as the Queen welcomed Honorable George Brandis, the Australian High Commissioner to the UK, during a private audience at Buckingham Palace on Wednesday.

The audience room is where the Queen stores some of her most significant treasures, giving royal fans a rare glimpse into her personal life.

The room, situated on the palace’s first floor, is peppered with photographs of Royals.

There is a portrait of Zara and Mike Tindall on their wedding day and a picture of William and Harry in Military uniform.

The Queen regularly shifts the positioning of the photo frames around but these have been in place for years. 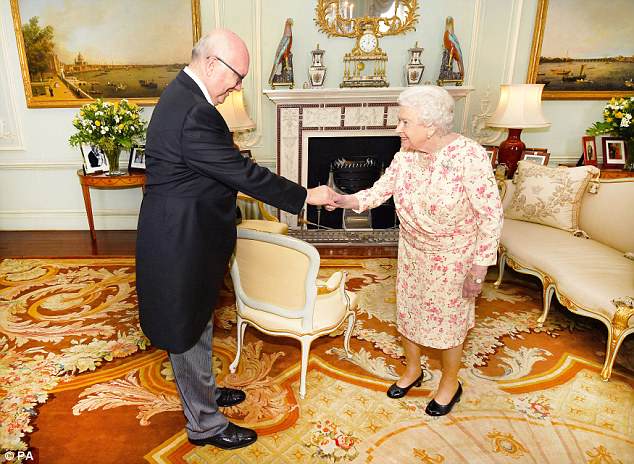 At Buckingham Palace, audiences are either held in The Queen’s Audience Room (pictured)  or in the 1844 Room

On the mantelpiece  stands two 18th Century English porcelain pheasants valued at £20,000; as well as a white marble and gilt bronze clock, valued at £4,000; an English gilt mirror, valued at £30,000.

In the fireplace there is a two-bar electric fire, with only one bar lit up. Similar models can be bought on the high street for £29.99.

The Royals are known to face the cold with fortitude, with the dated rooms in their various haunts known for their draughts and difficulty to heat. The Queen has similar budget heaters in fireplaces in all of her residences

At Buckingham Palace, audiences are either held in The Queen’s Audience Room or in the 1844 Room.

The Queen gives a weekly audience to the Prime Minister and will also have a private audience with the Chancellor of the Exchequor before a new budget is announced, as well as with visiting Heads of State who are not attending on an official State Visit.

The Queen also chairs Privy Council meetings, which are held regularly throughout the year, usually around once a month.