Never-before-seen photos have emerged shining a light on France’s role in rounding up Jews to send to Nazi death camps during World War II.

Pictures set to go on display in Paris this week show some of the thousands of men who were tricked into turning up for a routine registration in the capital in May 1941 before they were arrested by French officials and eventually sent to Auschwitz.

Images of the infamous ‘green ticket round-up’ show couples hugging each other goodbye outside one of the registration halls, unaware they would never see each other again.

One black and white photo shows SS officer Theodor Dannecker, who was in charge of implementing the ‘Final Solution’ in France, alongside French police commissioner Francois Bard in a hall, as they schemed to deport the Jews.

In another image, Dannecker is seen watching on as Jews boarded a train destined for a French camp south of Paris where they were to remain until their eventual transferal to Auschwitz.

The ‘green ticket round-up’ was first carried out in Paris on May 14 and 15, 1941, with more than 6,000 foreign-born Jews summoned to town halls across the city for what was billed as a routine registration.

SS captain Theodor Dannecker (left), who was an associate of Adolf Eichmann, orchestrated the Final Solution in a number of European countries during the Holocaust. Dannecker became leader of Jewish Affairs in Paris where he oversaw the roundups of Jews by French police. He is pictured watching on as Jews board transport at Austerlitz station, destined for a concentration camp 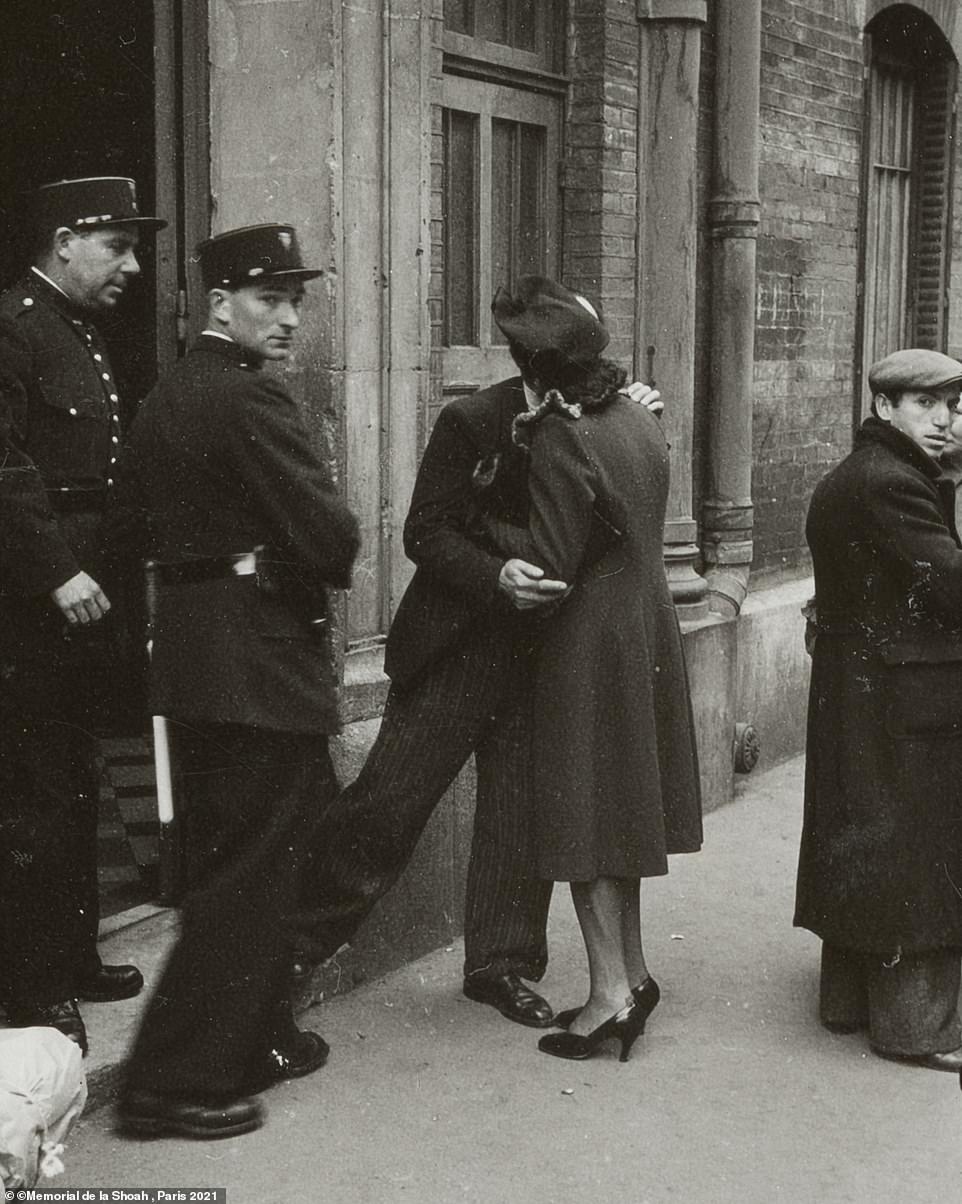 Wives say goodbye to their husbands outside the Gymnase Japy in the 11th arrondissement of Paris on 14 May, 1941, before they are sent away to concentration camps. The summoned Jews thought they were turning up for a routine registration but were tricked and deported to the camps without warning after they were arrested inside the gymnasium 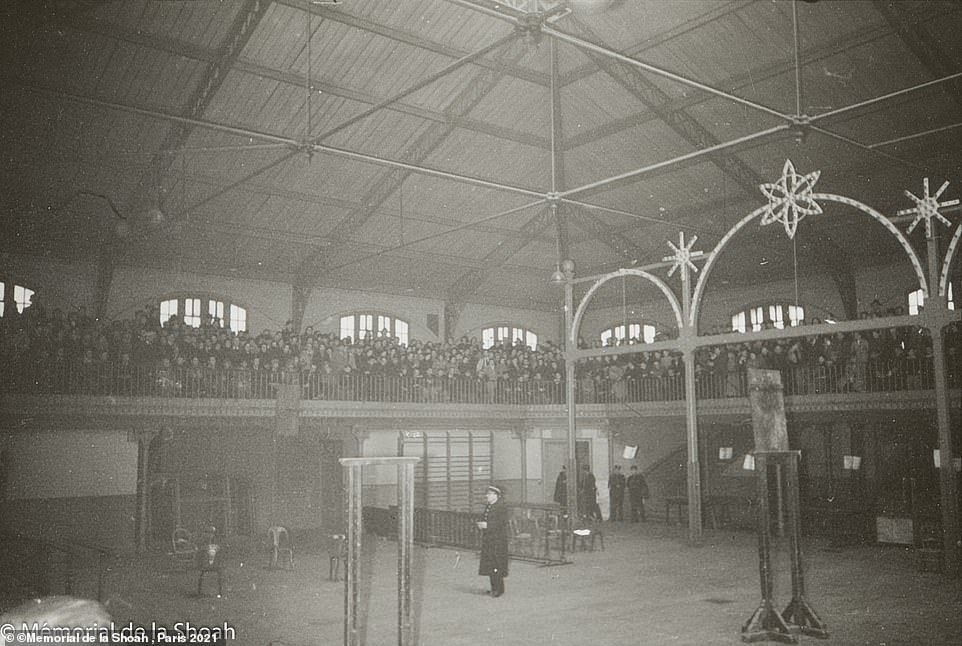 Inside the Gymnase Japy, which is normally used as a sports hall, hundreds of Jewish men stand on the upstairs balcony while police officers on the floor below carry out the deportations. The first stage of the roundup has already taken place with the Jews lined up inside after they had received their green tickets summoning them to appear 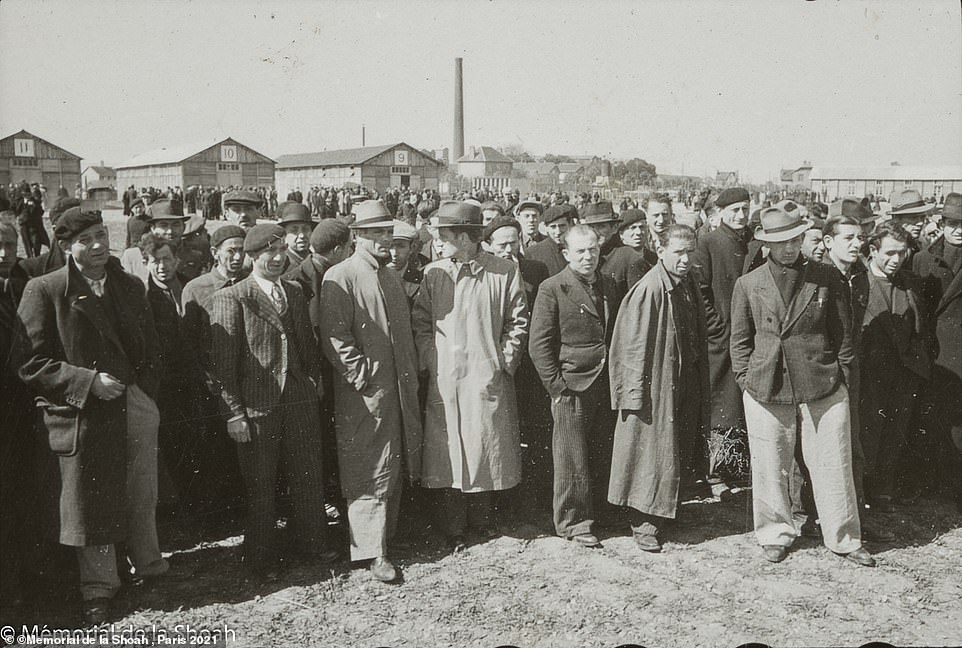 On the day after the round up, the Jews are pictured at the Pithiviers and Beaune-la Rolande internment camps. In the camps, Jews were held before being transferred to a concentration camp, often Auschwitz. Children were often separated from their parents in the internment camps while people were processed. 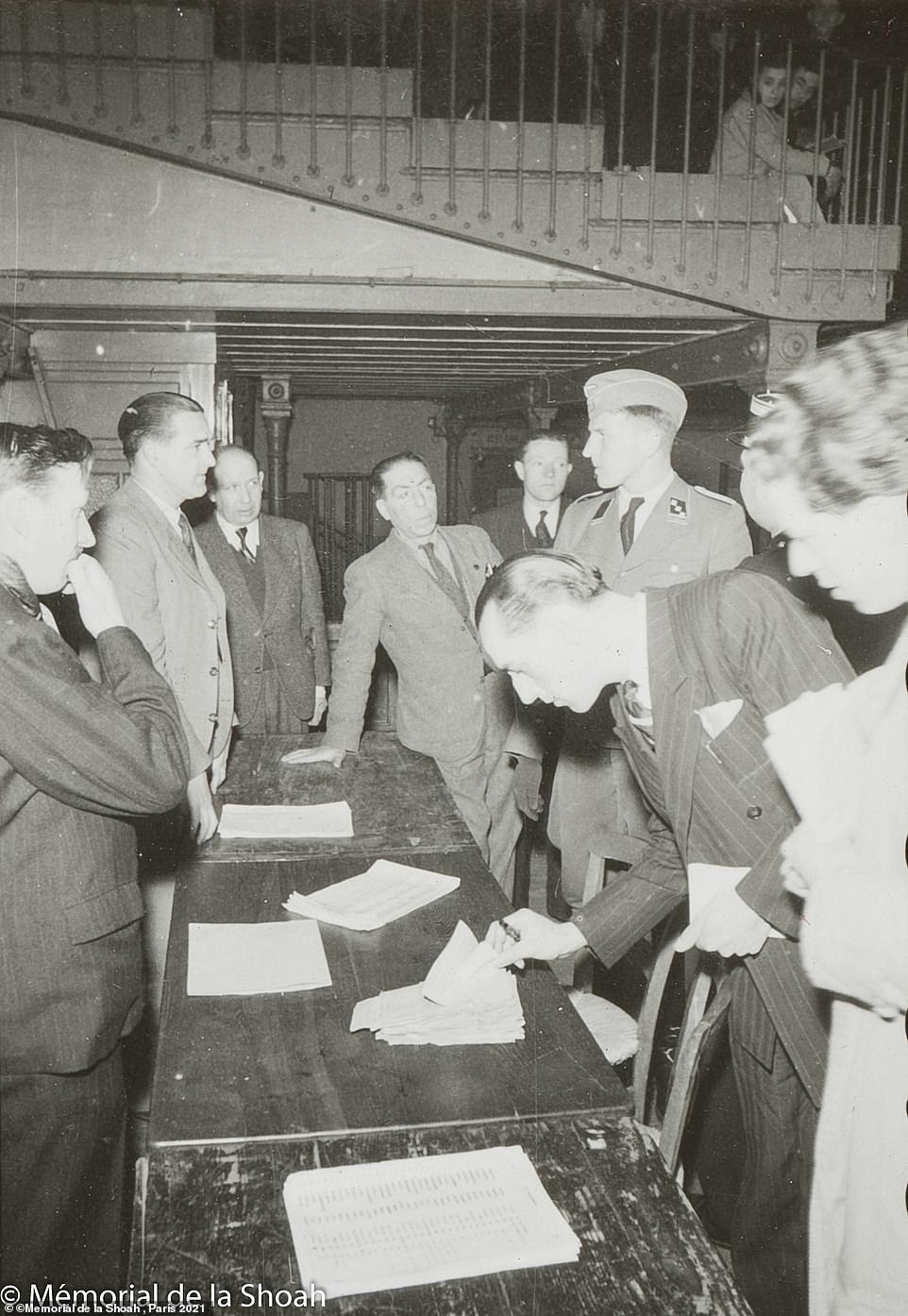 Inside the gymnasium, Dannecker, pictured in uniform, together with French police commissioner Francois Bard (right) process the arrests of Jewish people they had tricked into arriving for the registration 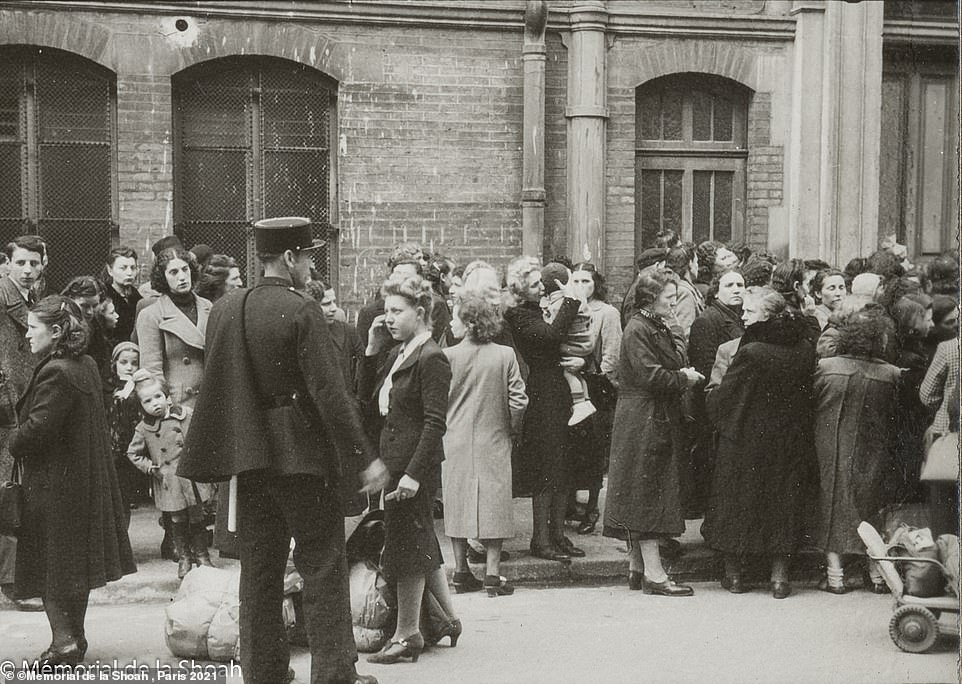 A group of women stand outside the gymnasium holding bags and packages while their husbands present their green tickets to the authorities. People summoned were told they could bring one friend or family member. More than half of those asked obeyed the summons

They received a summons on a green card which was hand-delivered by a French policeman, ordering them to go to police stations for a ‘status review’.

The cards read: ‘Mr X is invited to present himself in person, accompanied by one member of his family or by one friend, at 7:00 in the morning on May 14, 1941, for an examination of his situation.

‘He is asked to provide identification. Those who do not present themselves on the set day and hour are liable for the most severe sanctions.’

Instead, the 3,747 men who showed up were arrested by the French authorities and shipped to camps south of Paris. Thousands more were rounded up in the following months.

They were held there for a year before being deported to the Auschwitz death camp. 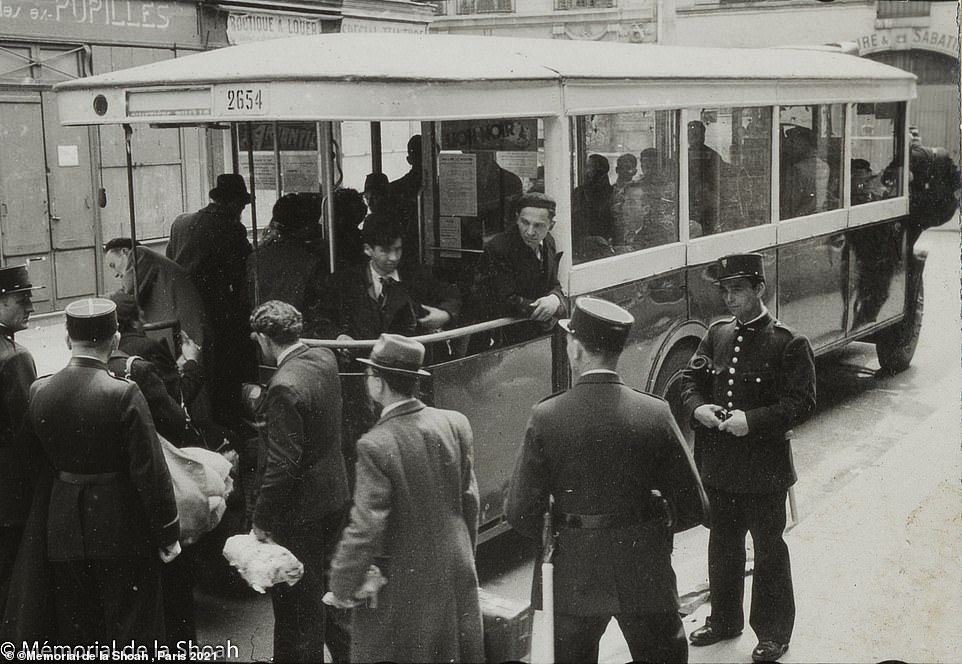 Under police custody, the Jews were directed on to buses outside the gymnasium and they were taken to Austerlitz station in the southeast of Paris. They would then be shipped off to camps south of Paris before they would be deported to Auschwitz 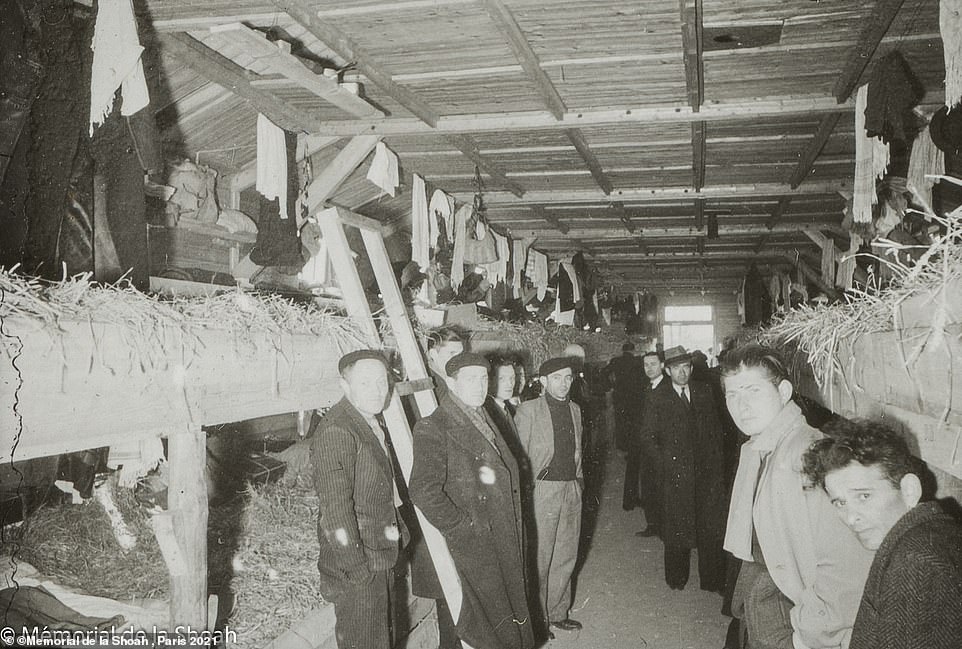 A group of men inside the internment camp are pictured the day after they were deported from Paris. The horror and sadness is clearly visible on their faces as they stand in the barracks which are under construction and offered only straw as bedding 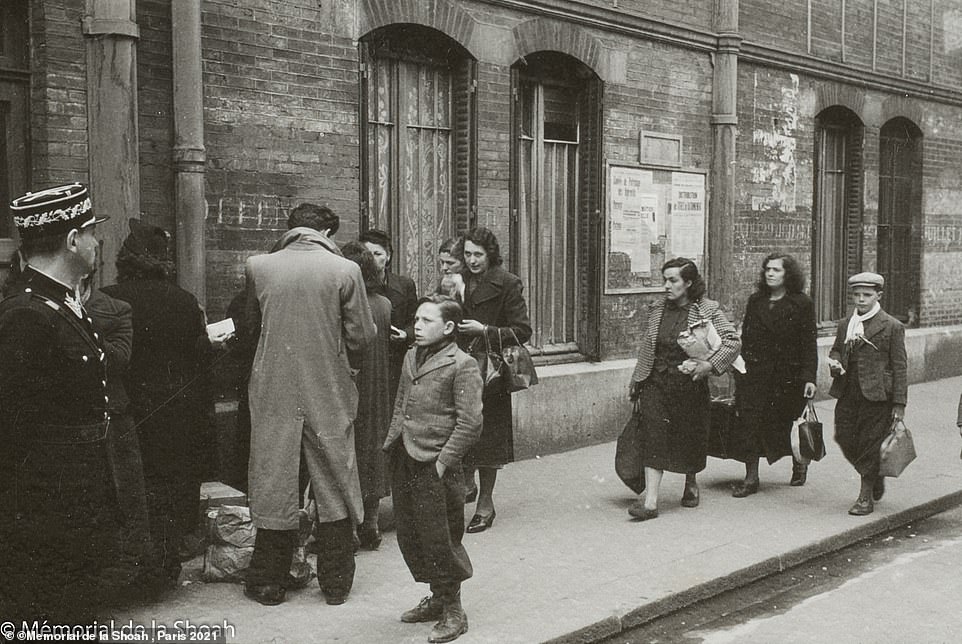 Children are seen along with mothers outside the gymnasium while their fathers are being processed inside. The 3,747 men who showed up were arrested by the French authorities and shipped to camps south of Paris 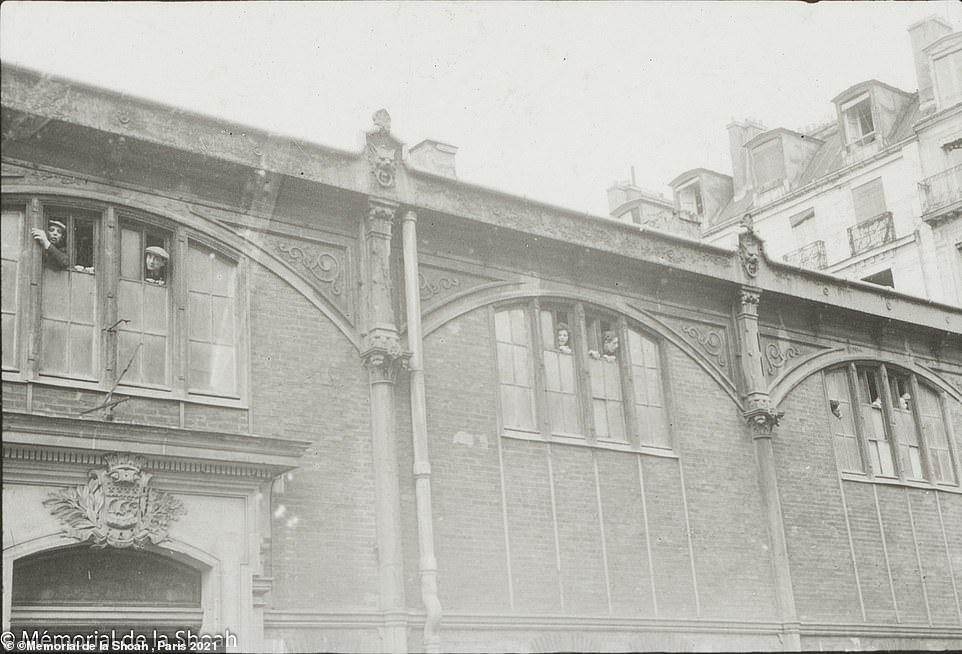 Men peer out of the windows of the gymnasium on to the pavement below where their family members are congregated. The ‘green ticket round-up’ was first carried out in Paris on May 14 and 15, 1941, with more than 6,000 foreign-born Jews summoned 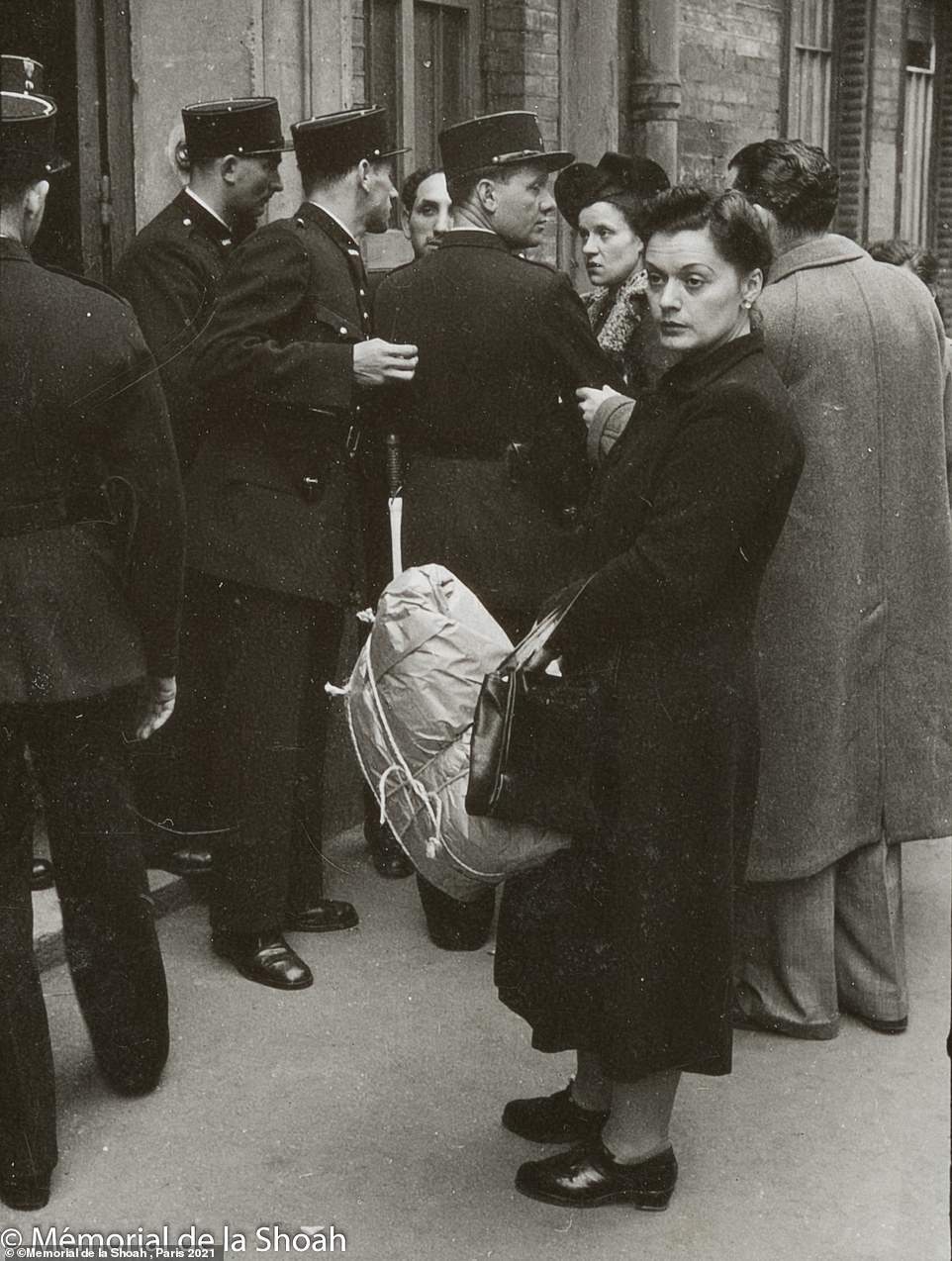 The photographer has been identified as Harry Croner, who was soon after kicked out of the German army after it was discovered that his father was Jewish. He was on a propaganda mission but it is unlikely the photos were used because of the pain they depicted

By chance, a stash of 98 photos from the first green ticket round-up, taken by a German soldier on propaganda duty, were recently discovered by the Memorial de la Shoah, the Holocaust Museum of Paris.

Most were taken at the Japy sports hall in the city’s 11th arrondissement, where close to 1,000 were arrested, and where the photos are being put on display from Friday, exactly 80 years on.

‘These photos are important because we see the opposite of Nazi propaganda that tried to depict these people as sub-human “parasites”,’ said Lior Lalieu-Smadja, who heads the museum’s photography department.

The photographer has been identified as Harry Croner, who was soon after kicked out of the German army after it was discovered that his father was Jewish. 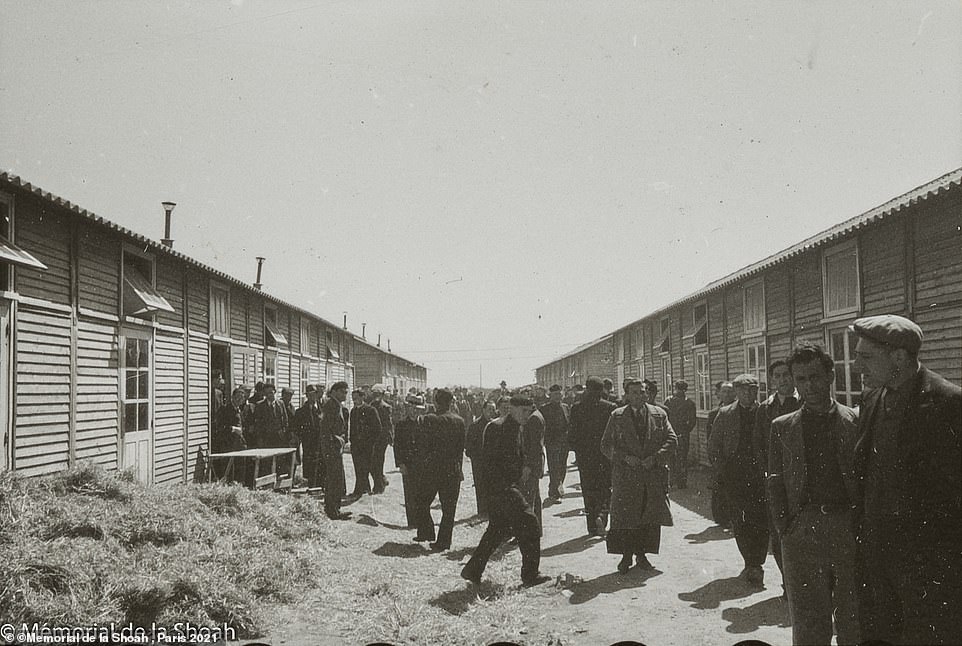 The detained Jewish people were held at the internment camps for as long as a year before they were transferred to Auschwitz, living in unsanitary conditions in close quarters with their fellow men 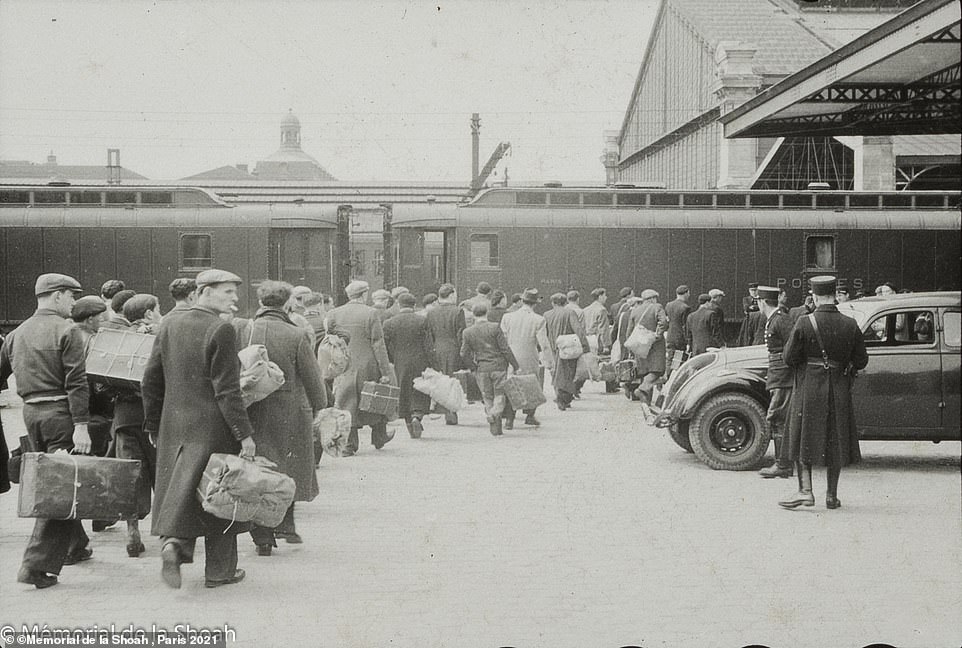 A group of men walk towards the train at Austerlitz, carrying their belongings which consisted of a small portion of food and a change of clothes. The stash of photos was recently discovered by the Memorial de la Shoah, the Holocaust Museum of Paris 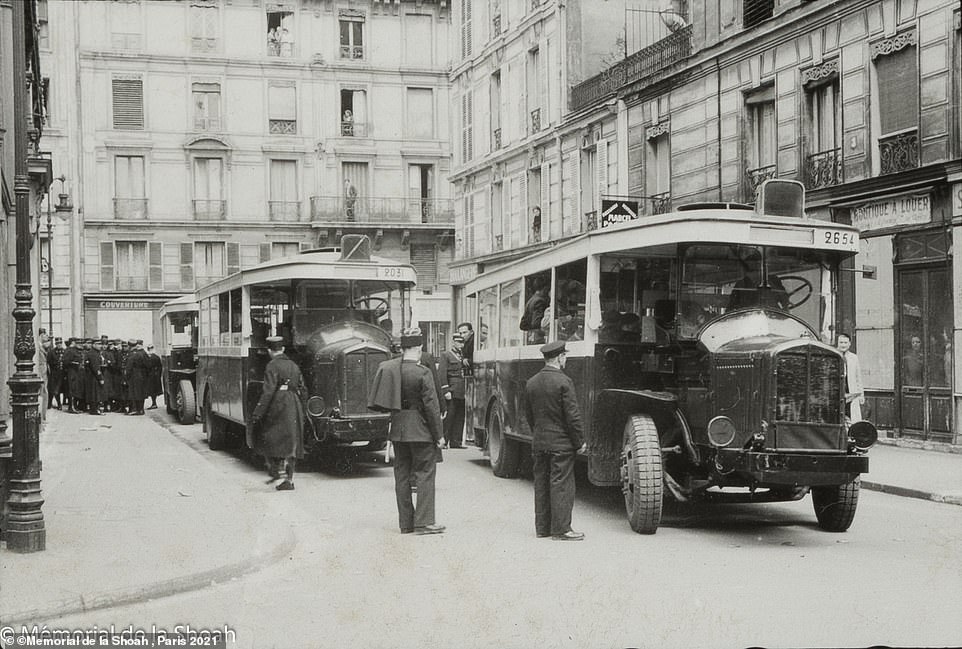 Under the watchful eye of the French police officers, Jews are rounded up and directed on to the buses which will transpor them to Austerlitz station. 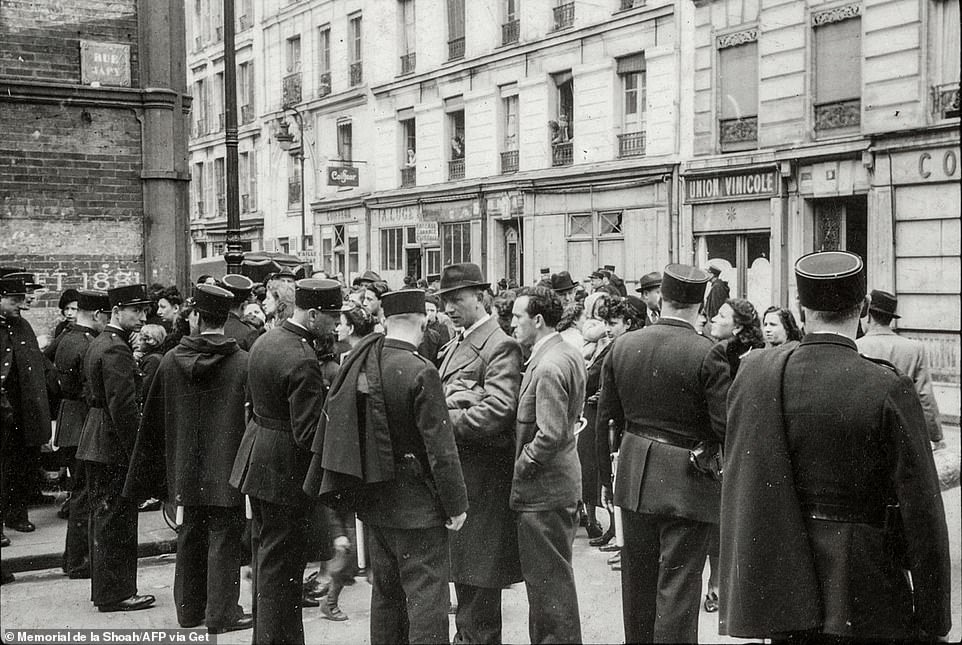 On May 14 and 15, 1941, more than 6,000 foreign Jews living in Paris, mainly from Poland, were asked to come and be registered in the police stations of the city and the Paris region. At the end of this census, 3,747 men, those who responded to the summons, were deported 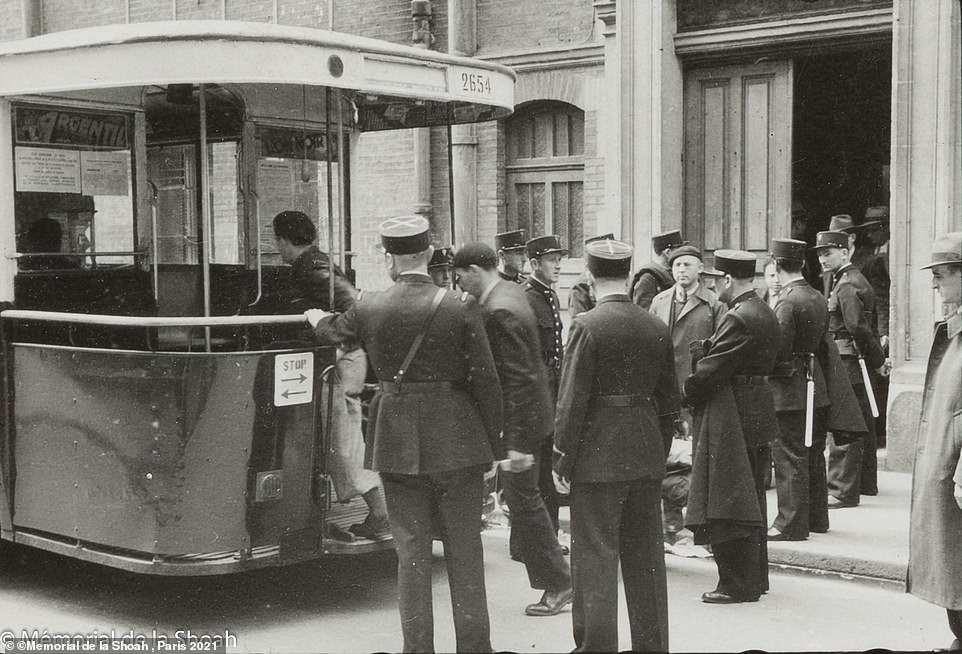 The men spent a few hours being processed at the gymnasium before they were sent away to the internment camps. The photos were bought years ago by an antiques dealer in Normandy who had found them at a flea market 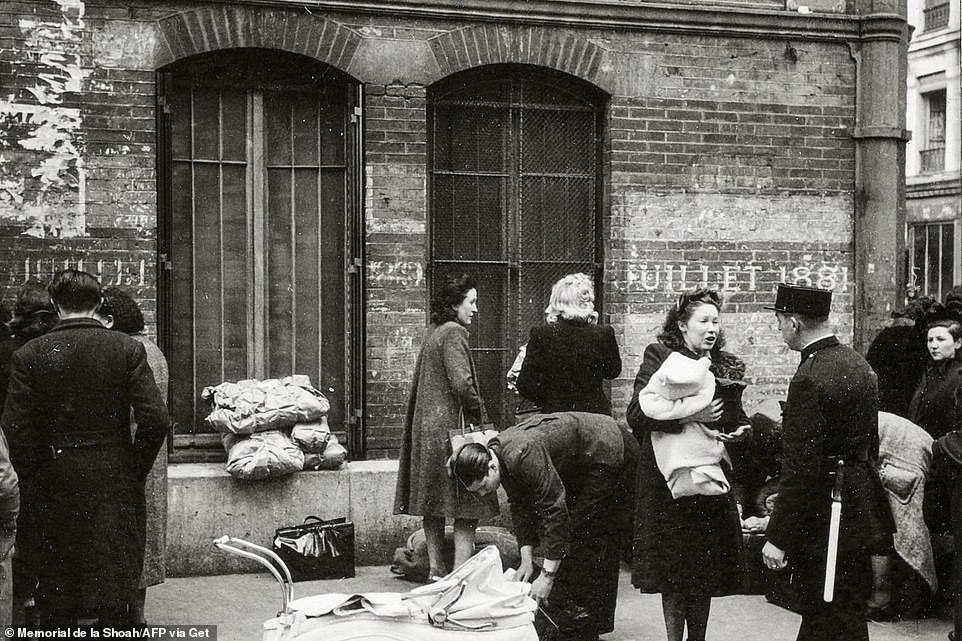 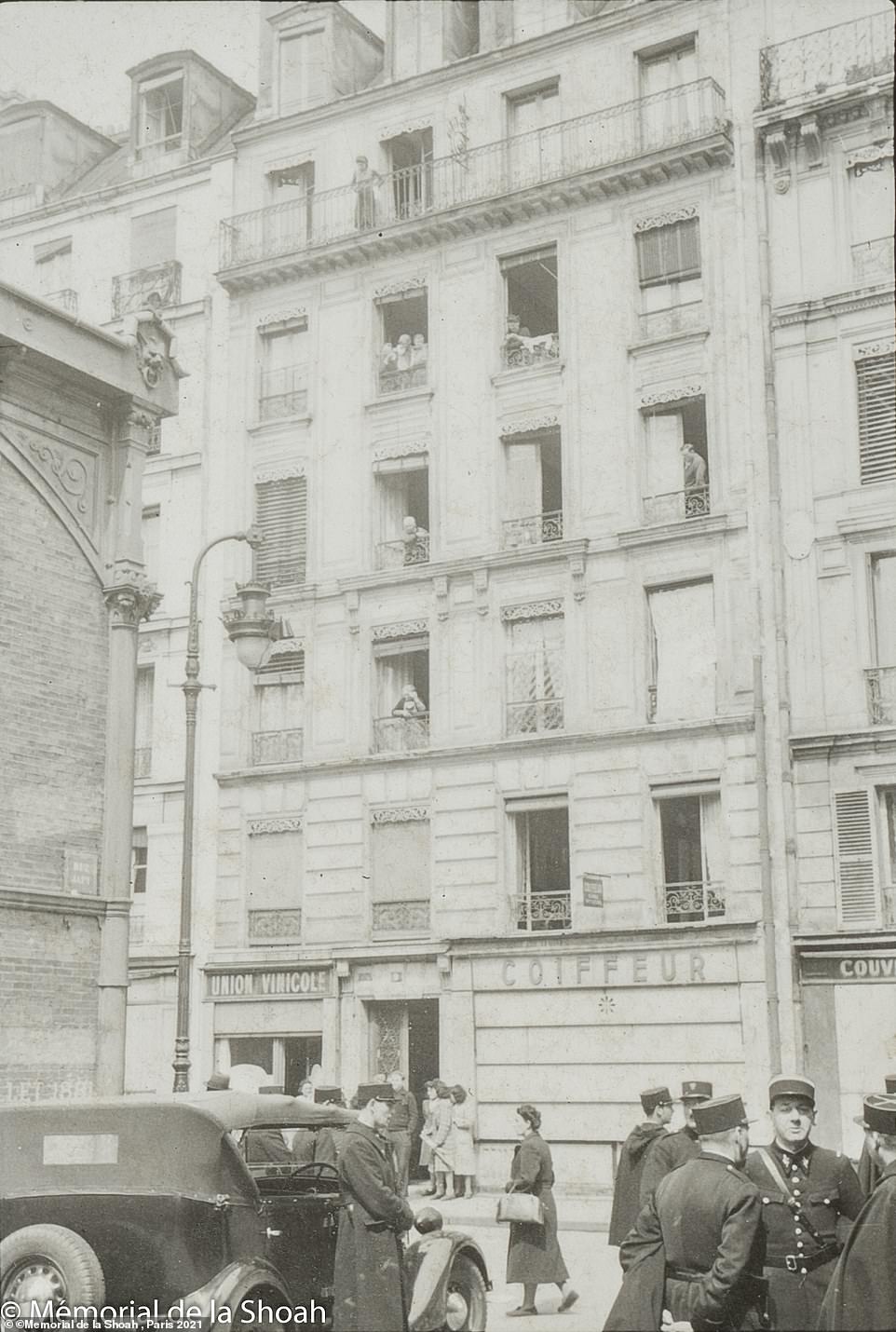 Lalieu-Smadja said it is possible he deliberately wanted to show the desperate humanity of the situation in his images.

The photos were bought years ago by an antiques dealer in Normandy who had found them at a flea market.

He pulled them out of storage recently and contacted the museum, who informed him they were the only known pictures from the infamous round-up.

Little else is known about the photos’ journey.

‘The only thing we know for certain is that once they were taken, they were sent directly to Berlin.

‘The photographer himself could not keep them, which makes this discovery even more incredible,’ said Lalieu-Smadja.

France was occupied by Germany after a successful invasion in 1940 which ended with the occupation of Paris and a French surrender.

The Occupied Zone in the north of the country was administered by the Nazis under the rule of Marshall Philippe Pétain in what was known as Vichy France after the government relocated there.

The new government adopted German laws which excluded Jews from certain roles in society and started to prepare internment camps in the southern Unoccupied Zone.

Once they were in operation by 1941, Vichy had denaturalised around 15,000 Jewish people and carried out a census of foreign Jews.

Theodor Dannecker, head of Jewish Affairs in the regime, wanted to speed up their removal from society and used the census to send out green summons cards to 6,694 foreign Jews, the majority of whom were Polish men.

The cards were hand-delivered by French policemen and invited the men for a ‘status review’.

More than half obeyed the summons, believing it was an administrative formality, but they were immediately arrested on their arrival.

The relative who was invited to accompany them to the review was then sent out to fetch food and clothes before the men were transferred to the interment camps.

Around 800 people managed to escape the camps but the vast majority were sent to Auschwitz where they were killed.

Historians have since debated the extent to which Vichy France had an agenda of its own or directly followed orders from the Nazis in Berlin.

The first French president to accept responsibility for the arrest and deportation of Jews from France was Jacques Chirac in 1995.