Three Arizona siblings lost both their unvaccinated parents to COVID-19 within two days after both tested positive before Thanksgiving.

Bob and Sue Walker of Phoenix, Arizona, tested positive for COVID-19 shortly before Thanksgiving, according to their children Jonathan 42, and twins Stephanie and Charissa, 40.

Sue tested positive while she was visiting a hospital for what she thought was a COPD flare-up, CNN reported. Bob took an at-home test shortly after.

On November 30, Sue passed away. Two days later, on December 2, Bob died too, both were unvaccinated and died on separate floors of the hospital. 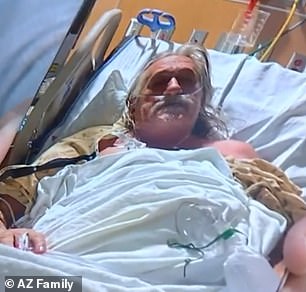 Despite Sue being able to move around and even requesting Taco Bell, she unfortunately succumbed to the virus on November 30. Two days later, Bob – who had been placed on a ventilator and was in the ICU, passed on December 2. Both of them were unvaccinated 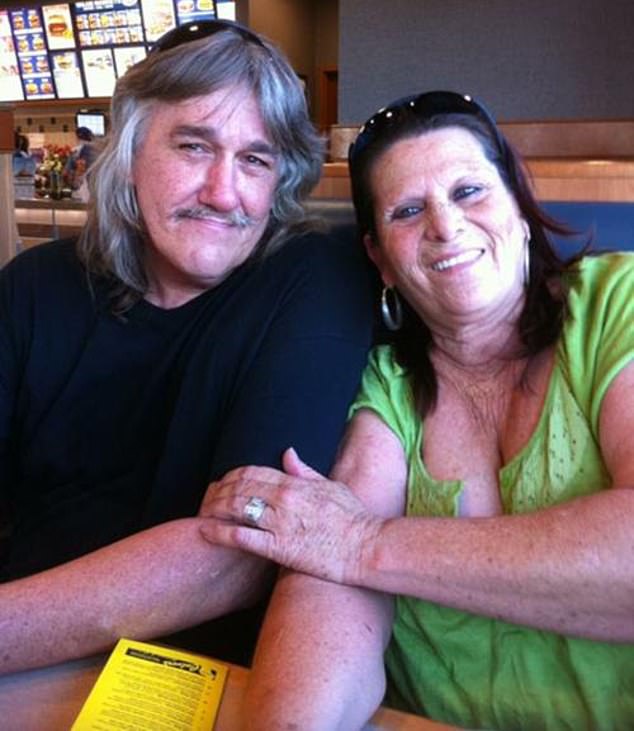 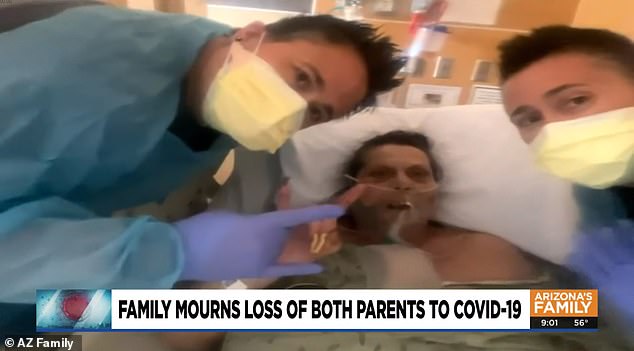 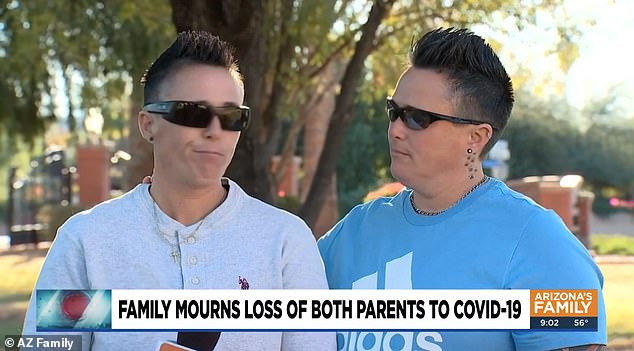 Their children, twins Stephanie (left) and Charissa (right), 40, and Jonathan, 42, are now advocating for others to take the virus seriously

‘They were truly, truly a couple, you know. I mean, nothing could come in between them,’ Stephanie Walker told CNN. ‘And, unfortunately, Covid took them both within 46 hours of each other.’

The couple, who called each other ‘mate’ and ‘matey’ and had been married for 44 years, both had health issues. Bob recently had his foot amputated due to complications from diabetes and had kidney problems, according to their son Jonathan. Sue had COPD, which can cause airflow blockage and breathing problems.

Jonathan also said their father had to be placed on a ventilator and was in the ICU, but Sue had appeared to be getting better and was able to move around and had even asked for Taco Bell.

The siblings said they arranged a FaceTime call between the whole family, so that their parents could see how they each other were doing.

Sue reportedly was stunned and was in a trance when she saw how Bob was faring, Jonathan said.

‘She kind of woke up out of it and was like: “Mate, you got to get better. We got to go home for Christmas, mate,”‘ Jonathan told CNN. ‘I truly think that at that moment my mom’s heart broke.’

‘The admiration dad had for mom, he wouldn’t be able to go on without her either,’ Stephanie told AZ Family.

The siblings are now celebrating their parents’ true love, even through their heartbreak.

‘My parents loved each other. There was no doubt about that,’ Jonathan told CNN. ‘They held true to their vows until death do us part.’

‘I just hope I have a love like theirs,’ Charissa said. 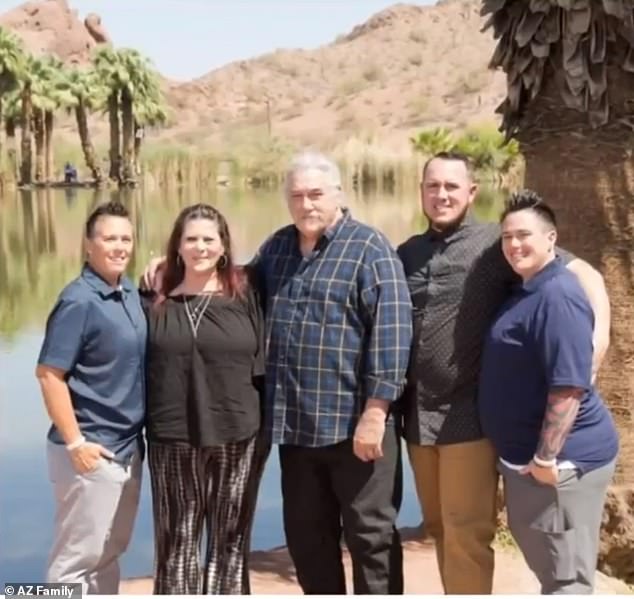 The family received their parents ashes just days before Christmas after the couple fell sick with the virus shortly before Thanksgiving (pictured L-R: Stephanie, Sue, Bob, Jonathan, and Charissa) 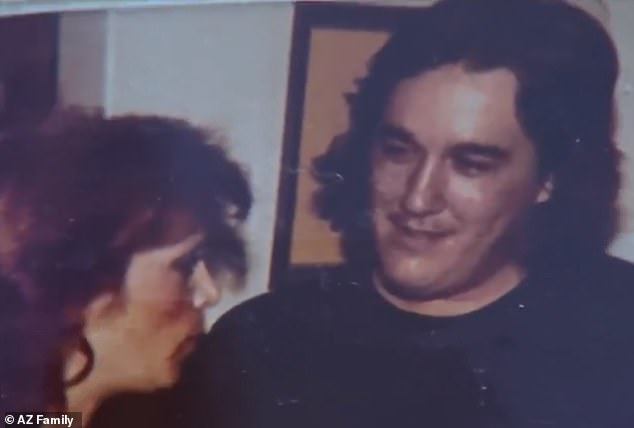 The siblings received their parents’ ashes just days before Christmas and are still adjusting to life without them.

The siblings described their dad as the true handyman who was already ready to help his kids.

‘He was our hero. He was the one we always would call “Dad, I got a flat tire,” “Dad, I need an oil change,” and he was always there,’ Stephanie told AZ Family.

Their mother had reportedly been excited about the boxes hanging on the tree that she had put money in. Every one of their kids and grandchildren were supposed to pick one out on the big day.

‘She was really excited about her boxes she just made to put on the Christmas tree. She was going to put money in each of them and have all the grandkids, and all of us pick a box, and whatever was in the box was what we got,’ Stephanie described.

The three of them now hope that others take the virus seriously and learn from their devastating ordeal.

‘Covid is real, and it doesn’t judge,’ Charissa told CNN. ‘Losing one parent to this virus – it’s horrible – but losing two parents within a short amount of time is unbelievable.’

‘When you least expect it, it can take your life. We never expected it to take our parents’ lives,’ she told AZ Family. 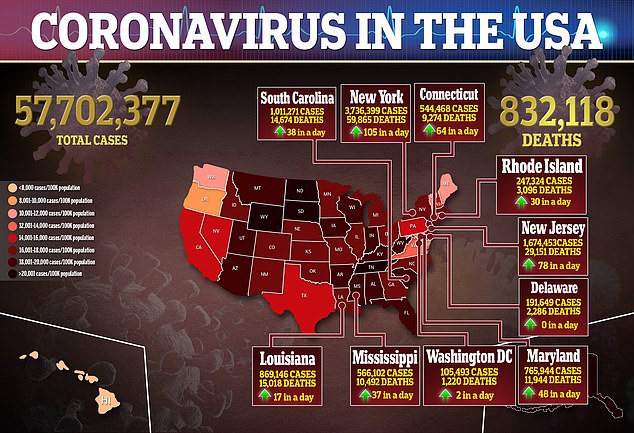 COVID-19 cases have been on the rise in Arizona with more than 70,000 people infected currently

A total of 70,000 cases are currently in the state, as the state and nation experience an uptick in numbers due to the Omicron variant.

The death rate in Arizona is one of the highest in the nation, ranking fifth, according to the CDC, as 61 new deaths were reported on Wednesday.

An Arizona State University Biodesign Institute Direction Dr. Joshua LaBaer said that 90 per cent of the cases the university sampled have been detected as Omicron.

LaBaer claimed Omicron is ‘overwhelmingly’ dominant in the state.