Tourism is restarting around the world, says UNWTO, with 40% of destinations now easing travel restrictions amid a pandemic that has resulted in over £245BILLION in lost revenues

The ‘responsible restart of tourism is underway around the world’, according to the World Tourism Organisation (UNWTO), with 40 per cent of all destinations now having eased restrictions they’d placed on international tourism in response to the pandemic.

The UNTWO has been monitoring global responses to coronavirus from the start of the crisis, which has resulted in lost revenues of over £245billion.

Its latest outlook, which it recorded on July 19, is up from 22 per cent of destinations that had eased travel restrictions by June 15 and the three per cent previously observed on May 15.

According to the World Tourism Organisation, 40 per cent of destinations around the world have eased the restrictions they’d placed on international tourism in response to the pandemic. Pictured are tourists on the beach at Playa de Las Americas, Tenerife, on July 28

The UNWTO says it ‘confirms the trend of a slow but continuous adaptation and responsible restart of international tourism’.

However, at the same time, the organisation points out that of the 87 destinations that have now eased travel restrictions, just four have completely lifted all restrictions, while 83 have eased them while keeping some measures such as the partial closure of borders in place.

According to the UNWTO Travel Restrictions Report, destinations with a higher dependency on tourism are more likely to be easing restrictions on travel.

Of the 87 destinations that have eased restrictions recently, 20 are small island developing states (Sids), many of which depend on ‘tourism as a central pillar of employment, economic growth and development’.

The report also reveals that around half (41) of all those destinations that have eased restrictions are in Europe, which the UNWTO says confirms the leading role of the region for the responsible restart of tourism.

However, the report also shows that 115 destinations (53 per cent of all destinations worldwide) continue to keep their borders completely closed for tourism.

Looking at these destinations, the report finds that a majority (88) have had their borders completely closed to international tourism for more than 12 weeks.

Meanwhile, the UNWTO says the cost related to travel restrictions introduced in response to Covid-19 has ‘historic dimensions’. 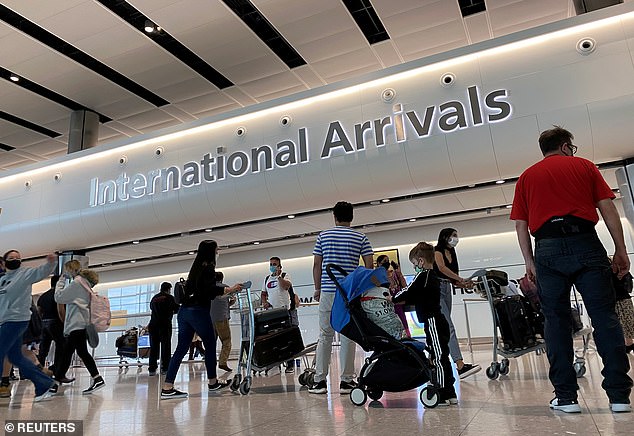 The UNWTO says there is a ‘trend of a slow but continuous adaptation and responsible restart of international tourism’. Pictured is the international arrivals hall at Heathrow on July 29

This week, it released data on the impact of the pandemic on tourism, both in terms of lost tourist arrivals and lost revenues.

The data shows that by the end of May, the pandemic had led to US$320 billion (£245billion) in lost revenues – three times the cost of the 2009 Global Economic Crisis.

UNWTO Secretary-General Zurab Pololikashvili said: ‘The restart of tourism can be undertaken responsibly and in a way that safeguards public health while also supporting businesses and livelihoods.

‘As destinations continue to ease restrictions on travel, international cooperation is of paramount importance.

‘This way, global tourism can gain people’s trust and confidence, essential foundations as we work together to adapt to the new reality we now face.’