Up to 10 per cent of people who have tattoos are at risk of severe, permanent scarring, experts warn.

Between five and 10 per cent of Europeans have a family history of keloids, according to The British Association of Dermatologists (BAD).

Keloids, which can also occur after temporary tattoos or eyebrow inking, are heaped-up scar tissue that rises abruptly above the skin.

A BAD spokesperson said: ‘People with risk for getting keloids are advised to avoid skin trauma such as tattooing, body piercing and unnecessary surgical procedures or cosmetic skin surgery, particularly on high-risk areas such as the chest or earlobes.’

Previous research suggests tattoos may cause cancer by leading to swollen lymph nodes that are less able to fight infections.

Past findings also imply one-fifth of adults in the UK have a tattoo, rising to 29 per cent among those aged 16-to-44.

Even temporary tattoos can cause permanent scarring

He said: ‘Keloid scars are rare but can be very disfiguring. Risk factors include family history, and they’re most common in those aged between 10 and 30 years old.

‘We see it more commonly in young females than young males, probably due to the prevalence of ear piercing.

‘Keloids can affect any part of the body but most commonly upper chest, back and shoulders.

‘Even temporary tattoos are known to cause keloids if patients react to the tattoo.’

Look at your family history of scarring before having tattoos

Dr Alexandroff adds the growing number of women opting for eyebrow tattoos should also be aware of the risks, saying: ‘I’ve not seen keloid after an eyebrow tattoo myself, but it can certainly happen.’

Peter Batty, general manager for Fagron UK, which produces the scar gel Nourisil MD, added: ‘Tattoos have never been more popular than they are today.

‘Estimates suggest that around 20 million Brits have at least one tattoo and 1.5 million of us are inked every year.

‘Yet a significant proportion of the population are prone to suffering keloid scarring.

‘And keloids can often show up weeks or months after the initial wound, whether it’s a cut, a tattoo or an ear piercing.

He said: ‘We’d never suggest that people stop getting tattooed. But we would ensure people ask a few key questions before they do so.

‘At other times in your life when you’ve had procedures, how have you healed? Is there a history of keloids in your family? If there is, and you have concerns, then tread carefully.’ 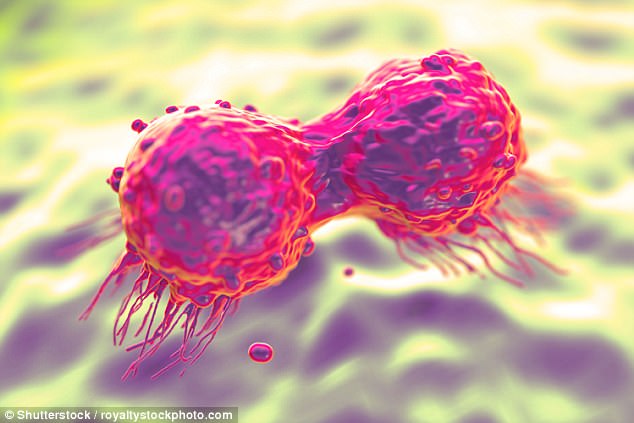 Tattoos may cause cancer

This comes after research released in September last year suggested tattoos may give people cancer.

Chemicals in tattoo ink travel in the bloodstream and accumulate in the lymph nodes, which may cause them to become swollen and therefore hinder their ability to fight infections.

The controversial chemical titanium dioxide, which is added to tattoo ink to create certain colours, even dyes lymph nodes, and has previously been linked to cancer, itching and delayed healing.

Study author Hiram Castillo from the European Synchrotron Radiation Facility in France, said: ‘When someone wants to get a tattoo, they are often very careful in choosing a parlour where they use sterile needles that havent been used previously.

‘No one checks the chemical composition of the colours, but our study shows that maybe they should.’