Up to 100 children have been hospitalised with a mysterious ‘inflammatory syndrome’ thought to be caused by the coronavirus.

Doctors today revealed that dozens of children, most aged between five and 15 years old, have become seriously ill with the condition that seems to appear up to a month after catching the coronavirus.

They say it is extremely rare and does not appear to have directly killed anyone in Britain but can lead to intensive care for a small proportion of those who get it.

The illness has been likened to Kawasaki disease, a rare disorder which causes rashes and a red mouth and eyes.

At least 18 children in London have been diagnosed with it since doctors first started noticing the syndrome last month.

Most troubling experts is that the illness is almost definitely caused by COVID-19 in some way but scientists can’t prove it.

The young patients’ lungs are not affected by it – in adults the coronavirus’s main target is the lungs – and many test negative when they are swabbed for the disease.

All of the patients studied so far, however, have tested positive for COVID-19 antibodies, meaning they have been exposed to the virus in the past. Scientists now believe it could be the consequence of the immune system going haywire after it has fought off the coronavirus infection, causing a second illness weeks later. 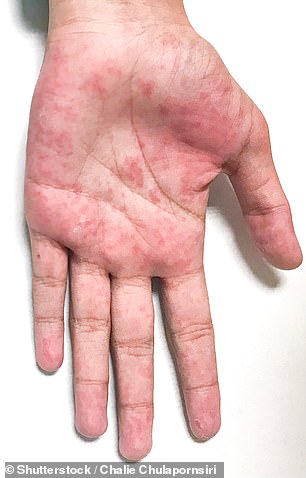 Medics have likened the illness to toxic shock syndrome and Kawasaki disease, which can cause redness of the tongue (pictured left) and rashes (pictured right), but it is unclear whether this illness is having those effects

Speaking in a briefing this afternoon, Dr Liz Whittaker, a paediatrician in London who has treated children with the illness, said: ‘There is likely an iceberg effect and we’re only seeing only the very, very sick children.’

Dr Whittaker said the peak of admissions related to the illness appeared to have happened last week.

Explaining the disease, Dr Whittaker said: ‘These children are usually presenting when they’ve had a high fever for a few days.

‘A large proportion of them have had severe acute abdominal pain and diarrhoea and some have them have had the rash, red eyes and red lips.

‘And those children become very unwell – they get cold hands and feet and they breathe very fast. Those are the group who absolutely need to be in an intensive care unit getting supportive care rapidly.

‘Most children seem to be very unwell for four or five days but then get better.’ 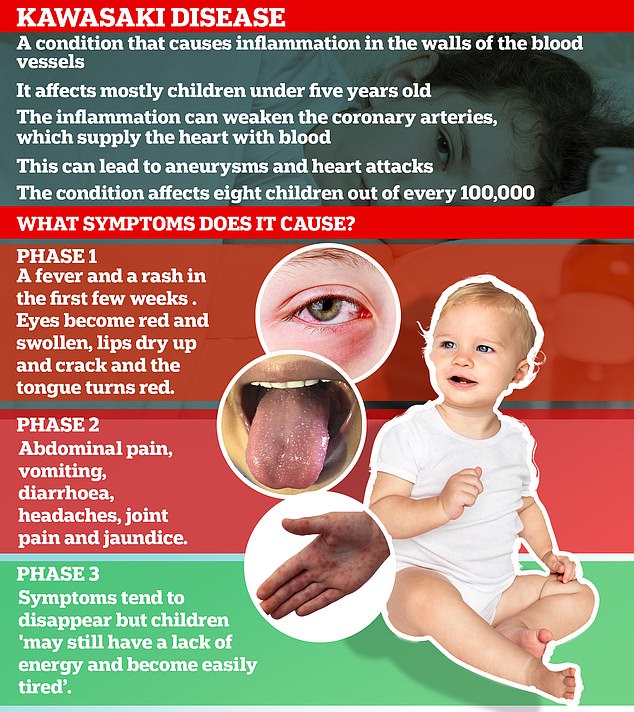 WHAT DO WE KNOW ABOUT THE SYNDROME?

The majority of the children being hospitalised with the condition have suffered from a high fever for a number of days, severe abdominal pain and diarrhoea.

The NHS sent an alert to doctors on April 27, warning them to look out for signs of the syndrome.

Doctors are currently treating the condition by using medications to calm down the immune system and dampen the overrection.

Dr Liz Whittaker, a paediatrician at University College London Hospital, said the sickest children are usually very ill for four to five days and begin to recover a couple of days after starting treatment.

It is not clear exactly how many children have needed intensive care for the Kawasaki-like syndrome, but a surveillance study has now begun in Britain and early results may be available next week.

Professor Russell Viner, the president of the Royal College of Paediatrics and Child Health, said knowing about the syndrome had not changed the ‘basic arithmatic’ of COVID-19.

He said: ‘In general, children get no symptoms or very mild symptoms. They rarely present to hospital.

‘In fact across the whole of the UK there’s been under 500 admissions to hospital for COVID-19.’

The experts described the illness as a ‘post-infectious phenomenon’ because it seems to appear weeks or even up to a month after the child caught the coronavirus.

And, unusually, it seems not to affect their lungs. COVID-19 is considered a respiratory infection in adults, meaning it focuses almost entirely on the lungs.

The Kawasaki-like syndrome being seen in children, however, seems to affect the heart in serious cases. It still causes a high fever, as in adults, but apparently not coughing or shortness of breath.

‘These children; their lungs aren’t affected… We know that some of these children have had their heart tissue affected, maybe we would find the virus in other parts of the body which are harder to access.’

She said this could account for why children appeared to be testing negative for COVID-19, despite having the syndrome.

Swab tests currently rely on collecting cells from the nose and throat and testing those to look for signs of infection in the airways.

Dr Whittaker added: ‘There is the possibility that we’re taking samples from the wrong place.’

The illness first came to public attention when NHS England in April circulated a warning urging doctors to look out for the condition.

In an alert sent to GPs on April 27, health chiefs said: ‘There is growing concern that a [COVID-19] related inflammatory syndrome is emerging in children in the UK.

‘Over the last three weeks there has been an apparent rise in the number of children of all ages presenting with a multi-system inflammatory state requiring intensive care across London and also in other regions of the UK.’

Health Secretary Matt Hancock at the time said he was ‘very worried’ by the reports.