Up to 3,500 cancer patients in England will die early due to coronavirus, study claims

Cancer treatment delays caused by the Covid-19 pandemic could cause up to 10,000 more avoidable deaths over the next five years, experts have warned.

London School of Hygiene and Tropical Medicine researchers modelled what effect the coronavirus-related disruption of cancer services will have by 2025.

They found between 3,291 and 3,621 patients with four of the most common forms of the disease — breast, lung, bowel and oesophageal cancer — could have their lives cut short.

But a grimmer study by the Institute of Cancer Research found the excess cancer deaths could exceed 10,000 when all other forms of the disease are included.

Catching tumours in their earliest stage before they are able to spread around the body is critical to survival.

During the UK’s epidemic, cancer screening and routine referrals were suspended in a bid to protect the NHS from being overwhelmed.

The Covid-19 crisis has also made people hesitant to use healthcare, causing a huge drop-off in symptomatic cancer patients seeing their GP.

At the same time, 55,500 more people are now waiting to have key cancer tests in England’s hospitals compared with the same point last year.

The researchers are urging the Government to launch a public health blitz urging Britons with suspected symptoms to seek treatment.

They are also calling for the NHS to ramp up its diagnostic capacity to help clear the backlog of people waiting for vital tests and treatments.

The research, published in Lancet Oncology, drew on NHS cancer registration and hospital data of more than 93,000 patients diagnosed in 2010-2012.

They used this data to estimate the effect of delays in diagnosis on cancer survival for four main types of the disease.

The researchers then assumed the current drop off in referrals will continue for the next year, as the NHS adheres to social distancing measures and services try to get back up and running. 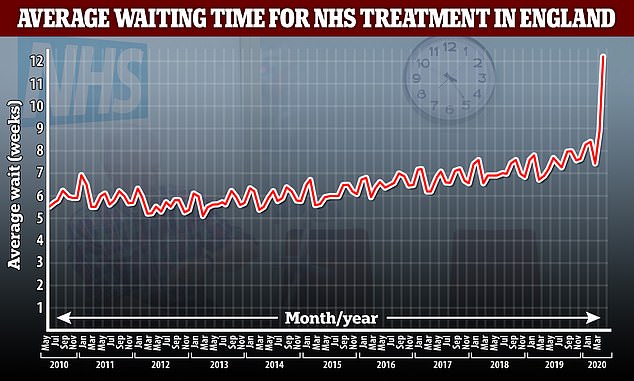 Ten million people could be stuck on NHS waiting lists by the end of the year due to coronavirus hold-ups, health bosses have warned.

Last August there were a record 4.41million patients in England waiting for routine operations, a rise of 250,000 from the same month a year earlier.

But that number is expected to more than double because of a backlog triggered by the Covid-19 crisis, according to NHS projections.

When officials realised the virus was spreading out of control in the UK they urged hospitals to cancel operations and turf out patients to make way for a surge in virus cases.

The move stopped hospitals from being overwhelmed but hundreds of thousands of non-virus patients have had treatment delayed as a result.

The health service is also bracing for its worst winter on record, when it will have to battle an influx of patients with seasonal flu and Covid-19.

A new report by the NHS Confederation, which represents represents health and care leaders, predicts 10million people on waiting lists by Christmas.

Bosses behind the projection said a best case scenario could see 8million people waiting for treatment, if a vaccine or therapy comes along before then.

Experts have warned it could take two years to clear the backlog, even if there is no second wave of coronavirus.

The report warned services will be operating at around 60 per cent capacity because of new NHS infection control and social distancing measures.

NHS Confederation chief executive Niall Dickson has written to Boris Johnson to prepare the public for the huge waits they will have to face for months after the crisis is over.

He has also called for assurances about personal protective equipment (PPE) and the effectiveness of the Government’s Test and Trace programme.

There are around 165,000 cancer deaths in the UK every year, according to Cancer Research.org.

‘To prevent this becoming a reality, it is vital that more resources are made urgently available for endoscopy and colonoscopy services which are managing significant backlogs currently, and that patients present promptly to their GP if they have any concerning gastrointestinal symptoms.’

Professor Richard Sullivan, from King’s College London, who also worked on the study, said: ‘On average, for each avoidable cancer death due to diagnostic delay, 20 years of life will be lost.

‘These estimates paint a sobering picture and reflect the many young people who are affected by cancer in the prime of life during their most productive years.’

The authors warned the true death toll could be far higher once all types of cancer were factored in together with delays in treatment for those already diagnosed with forms of the disease.

A separate study published in in the same journal today found that even in a best-case scenario, an additional 542 excess cancer deaths could occur in the UK as a result of the lockdown delays.

Researchers looked at a 25, 50 or 75 per cent reduction in people coming forward with symptoms and receiving urgent GP referrals over the three-month lockdown period.

The data suggested that if all patients eventually sought help and were referred for scans or other tests promptly at the end of lockdown in mid-June, there could be between 181 and 542 excess deaths within the next five years.

However, even more lives would be lost when delays in accessing scans and biopsies in a timely fashion are added to the totals.

When it came to cancer type, the ICR said delays for suspected bladder, kidney and lung cancers would have the biggest impact on the number of deaths.

Study leader Professor Clare Turnbull said: ‘It’s vital that we do everything we can to ensure cancer patients are not left further behind by the disruptions to care caused by the Covid-19 pandemic.

‘That means ramping up capacity as quickly as possible to allow cancer diagnostic services to clear the backlog.’

Professor Paul Workman, chief executive of the ICR, added: ‘It has become clear that the Covid-19 pandemic is taking a heavy toll on people with cancer – by delaying their diagnosis, disrupting access to surgery and other aspects of care, and pausing vital research into new treatments.’

For breast cancer, the scientists modelled that if everyone diagnosed with breast cancer experienced a one-month delay due to the pandemic, this would result in up to 228 more breast cancer deaths.

A six-month delay for everyone could cause 1,629 extra deaths from breast cancer.

‘While referrals to see a cancer specialist are starting to recover, we are still some way from this returning to normal.’