This is the moment a daredevil couple unicycled along a 35 metre-high bridge’s narrow beams.

Breathtaking footage shows Flaviu Cernescu, from Romania, and Dina Zaur climbing up a disused bridge to ride a unicycle on thin beams 35 metres over the Danube river, which runs through central and eastern Europe.

The couple climb into a dinghy to head for the 500 metre long bridge armed with a selfie stick.

After attempting to climb onto the structure by hooking his paddle inside a loop of wire, the video shows Mr Cernescu tumble into the water.

Letting himself float along with the river’s current, he is rescued by fishermen in a motorised boat, who are able to take him to the bridge and tow Ms Zaur to its base. 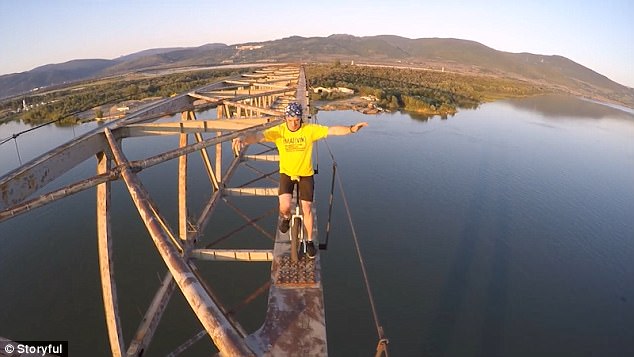 After scaling the disused structure, he rides a unicycle along the 500 metre-long bridge 35 metres above the water

Unsure as to whether worn wire will hold his weight, Mr Cernescu scrambles up the base, hoists his unicycle up with him and lowers a rope for his girlfriend.

When the couple are 25 metres above the water, they slowly walk across circular and flat beams. 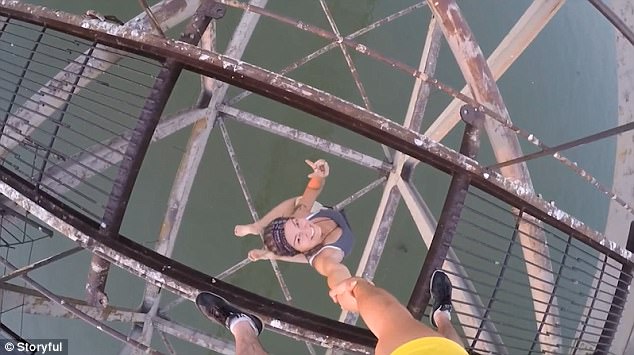 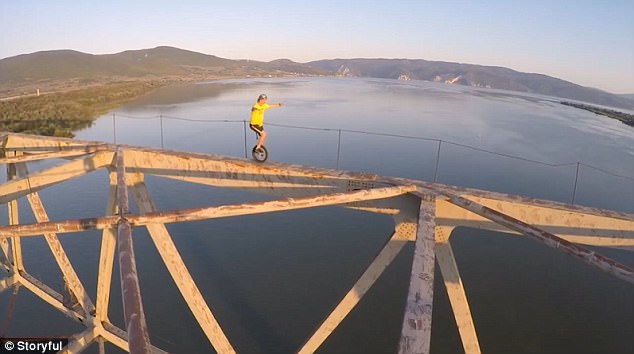 Mr Cernescu rides a unicycle across the bridge’s highest point, as heart-stopping footage catches him performing the stunt

Scaling a shaky ladder to add another 10 metres to their height, heart-stopping footage then shows Mr Cernescu riding the unicyle along the highest point of the bridge, balancing carefully as he films himself with the selfie-stick.

Not content with the stunt, he then dangles his girlfriend through a gap in the structure as she smiles up at him.