Hundreds of thousands of people with asthma have been warned of an inhaler shortage which is likely to last for the new few weeks.

Stocks are ‘very low’ of the Bricanyl Turbohaler, which may be used by more than half a million people, Asthma UK has said.

People who rely on that specific inhaler to manage their asthma should make sure they have enough to last them through most of December.

Not all Turbohalers are affected by the shortage – only the Bricanyl brand. Manufacturer AstraZeneca said it will restore the supply ‘as quickly as possible’.

Stocks of the Bricanyl Turbohaler are ‘very low’ in the UK, its manufacturer has warned, and it could take weeks before the supply is restored

A release by Asthma UK’s in-house GP Dr Andy Whittamore said today: ‘Stocks are very low in the UK at the moment.’

He added: ‘The manufacturers have confirmed to us that there are likely to be a few weeks (from November 2018) without a supply – but that they are working on getting the production line up and running as quickly as possible.’

Around 5.4million people in the UK have asthma – one in 11 – and more than one million of them are children. The condition kills three people a day, on average.

Everyone diagnosed with asthma will be given a reliever inhaler – known to many as the blue inhaler – to help them when their asthma flares up.

There are different types reliever inhaler available, and the Bricanyl Turbohaler was prescribed 640,294 times in 2016.

Some patients will have been given more than one of the inhalers so it’s hard to know how many people use them, but it’s likely to be hundreds of thousands.

The Turbohaler contains a drug called terbutaline, which is used to relieve the symptoms of asthma, including difficulty breathing and chest tightness.

Experts have advised people who use the Bricanyl Turbohaler to make sure they have enough medication to last them for the next month or so.

If they haven’t, they should visit a doctor so they can be prescribed an alternative to use if supplies run out. 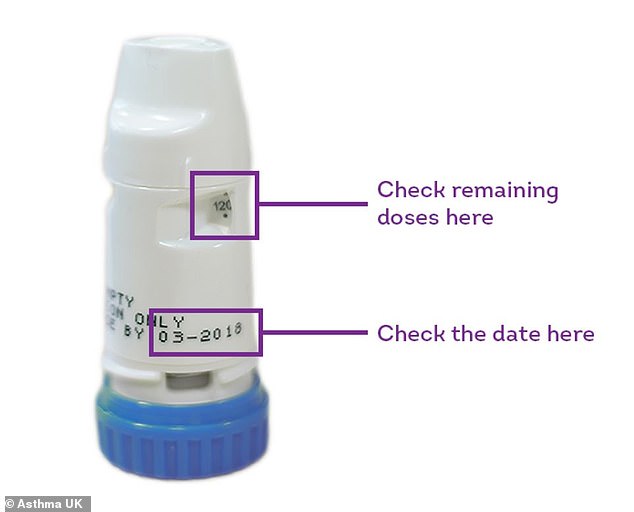 Dr Whittamore said: ‘If you’ve been using a Bricanyl Turbohaler because you had side effects from other types, it’s especially important that you have a conversation with your doctor or asthma nurse.

‘You may be prescribed a spacer alongside a new reliever inhaler.

‘A spacer helps makes your inhaler easier to use, is more effective for getting the medicine into your lungs, and also helps reduce side effects.’

He also recommends people continue to take their preventer inhaler to reduce the need for the reliever.

But people have been told there is no need to panic.

Doctors are aware of the shortage and are equipped to help patients with other medicine, if necessary, until stocks are replenished.

Asthma is a common but incurable condition which makes small tubes inside the lungs become inflamed, restricting the airways and making it hard to breathe.

Symptoms include wheezing, breathlessness, a tight chest and coughing, and these get worse during an asthma attack.

Young children who grow up exposed to air pollution are more likely to develop asthma, research suggested in December 2017.

A mix of dust, sand and non-exhaust tailpipe emissions, known as coarse particulate matter, increases youngsters under 11’s risk of the lung condition by 1.3 per cent, a study by The Johns Hopkins University found.

Air pollution also raises their risk of visiting the emergency room due to their asthma by 3.3 per cent and being hospitalised with the condition by 4.5 per cent, the research adds.

Young children are thought to be more at risk due to them typically spending a lot of time outdoors and being vulnerable to air pollution due to their immature lungs, according to the researchers.

Around 7.1 million children in the US have asthma, making it the most common chronic childhood illness.

Approximately 1.1 million youngsters are affected in the UK.

The researchers analysed the asthma diagnoses and treatment data of 7,810,025 children aged between five and 20 years old living in 34 states between 2009 and 2010.

They estimated levels of coarse particulate matter in each zip code using information from the EPA’s Air Quality System database from 2009 to 2010.