Uruguay 0-1 Venezuela: Luis Suarez hits the dugout in frustration after not being brought on as a substitute

Luis Suarez slammed his fist into the perspex wall of Uruguay’s substitutes bench in a fit of rage. He wasn’t playing in the shock defeat by Venezuela that knocked his team out of the Copa America Centenario but, of course, it was all about him.

Salomon Rondon’s first-half goal did the damage and as Uruguay fought to salvage the game and their tournament, Suarez prepared himself for action, determined to be their saviour.

The striker taped his ankles and warmed up, with Uruguay’s fans roaring him on, but when coach Oscar Tabarez started making substitutions, Suarez’s No 9 was not called. 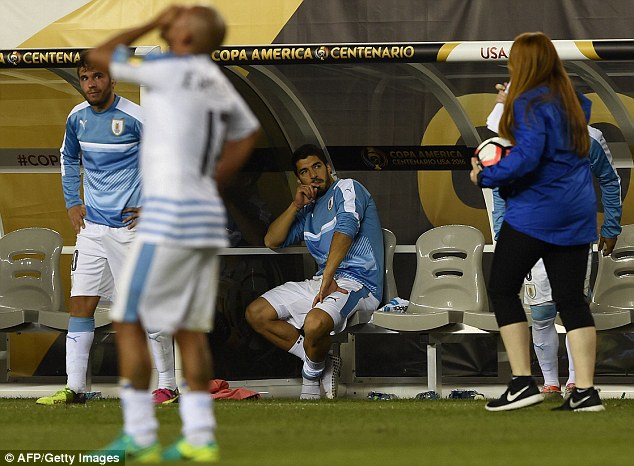 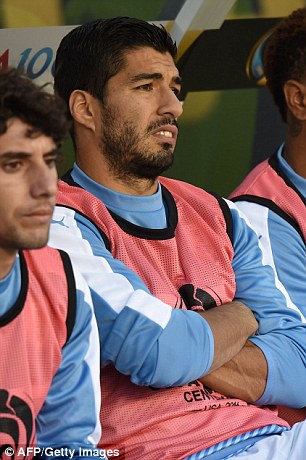 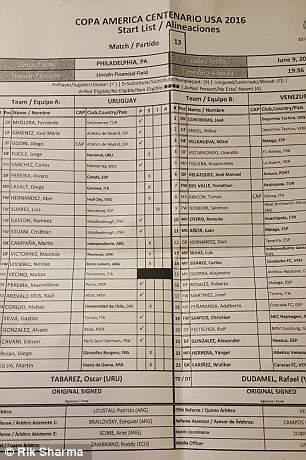 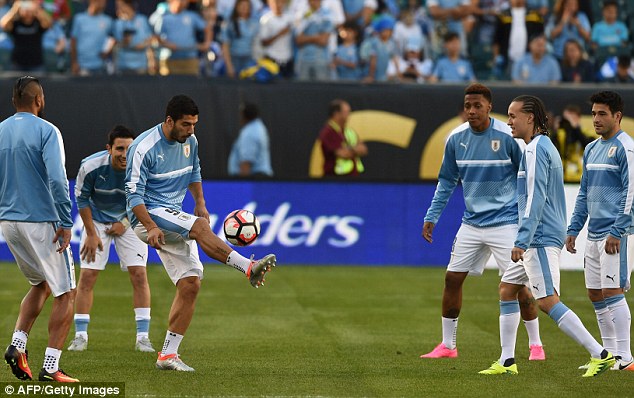 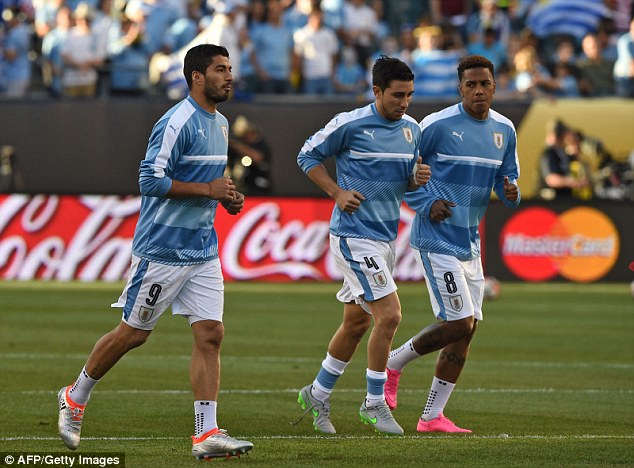 Suarez, who missed Uruguay’s defeat by Mexico, had expected to be given a chance as his side chased a goal

First came Diego Rolan, then Nicolas Lodeiro and finally Matias Corujo, with Suarez becoming increasingly agitated on the bench. After all three substitutions were made, the striker ripped off his bib, stalked over to his coach to shout at him and hit out at the bench.

But Suarez was unavailable to play the whole time. Listed as injured and not on the official teamsheet as a substitute, there was no chance he could have been brought on to help his side.

At first it seemed he was warming up to get the fans going, to try and put Venezuela at a psychological disadvantage, with defenders perhaps wondering if he was going to come on or why he was even out there warming up at all.

However, his reaction afterwards seemed to imply that he genuinely thought there was a chance he could make a difference.

Tabarez said after the game: ‘Suarez is not ready to play yet, that’s a matter for the doctors. However much he might get annoyed – and he didn’t tell me anything – I’m not going to play a player who is not 100 per cent.’ 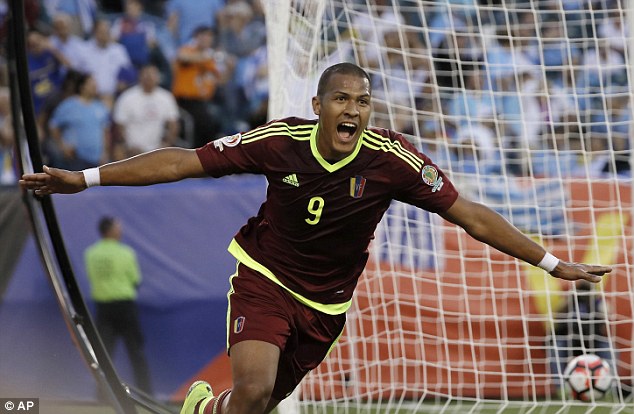 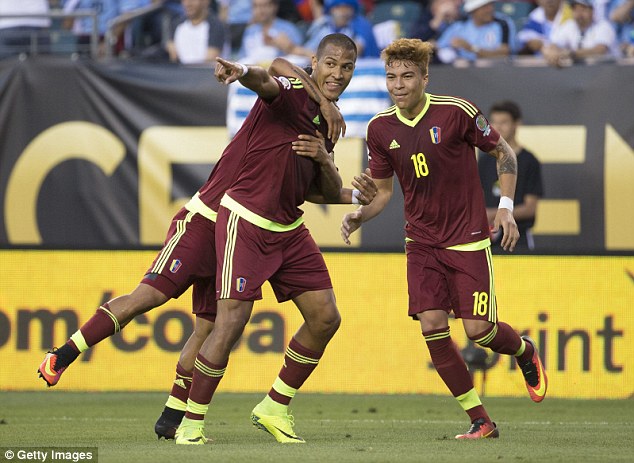 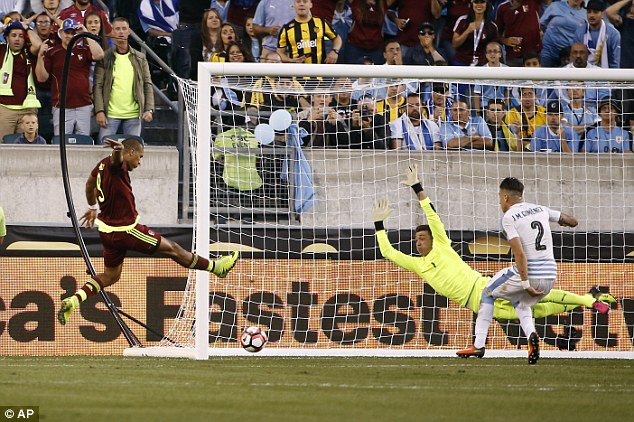 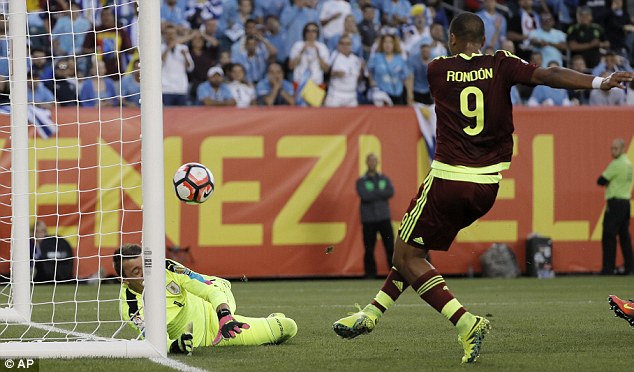 Suarez, for his part, stormed off towards the team coach, clearly still angry about his team’s impending elimination.

It was a strange story in the second half that almost overshadowed what was a nail-biting 45 minutes, as the scrappy first half gave way to a frantic second. And despite the Suarez sideshow, it can’t be overlooked how poor Edinson Cavani was up front for Uruguay.

The striker had three glorious chances and a few trickier ones, and they all went begging. In the 15th minute he kicked thin air instead of the ball. In the 32nd he made fractional contact with Gaston Ramirez’s fine free-kick and the ball clipped the outside of the post.

And then, with the game hurtling towards its denouement, the ball broke to him in the box after some clever interplay in the build-up. Cavani looked up. Glory beckoned. But he curled his strike wide of the far post.

Venezuela’s goal came in bizarre but brilliant fashion. Alejandro Guerra launched an effort at goal from over 50 yards out, which Muslera did well to tip onto his crossbar. Unfortunately for the goalkeeper, Salomon Rondon was following up, like all good strikers should, and gleefully fired the rebound home. 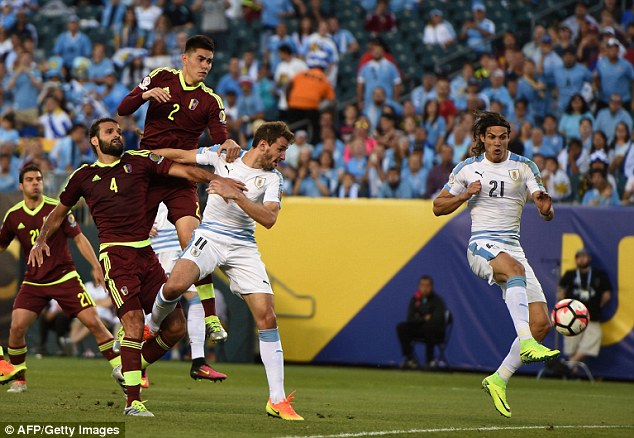 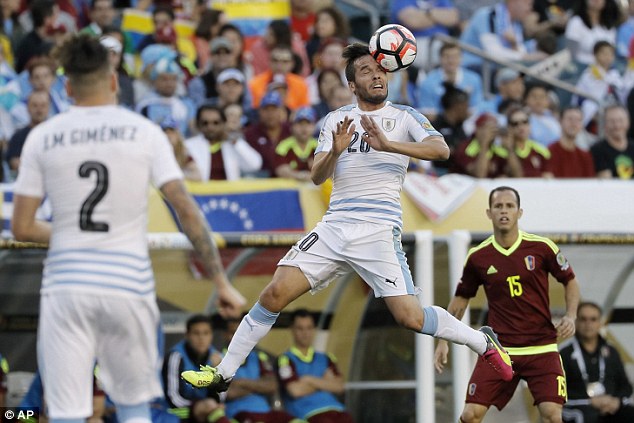 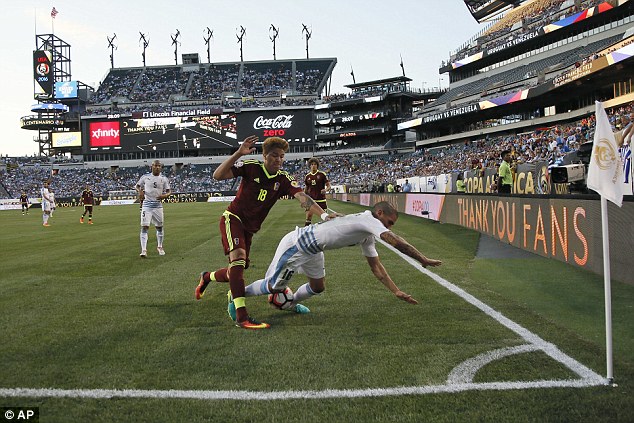 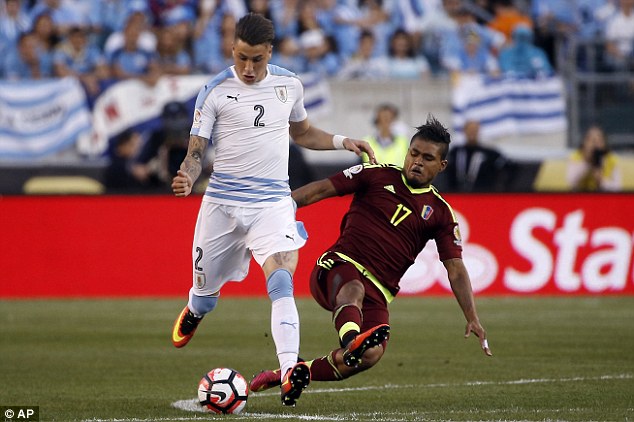 Guerra, who was having a fine game, nearly got on the scoresheet himself just before half-time, with a wonderful ball-juggling dribble seeing him beat three men, but firing his shot too close to Muslera from the edge of the box.

Guerra complained that Jose Maria Gimenez had fouled him, and that was true, but he would have been equally upset had advantage not been played and he wasn’t allowed to shoot.

In the second half Adalberto Penaranda had various chances to settle the game but one shot was weak and another final ball too short. Right at the death Romulo Otero missed an open goal too, from 40 yards, after Muslera had gone up for a corner and Venezuela broke away.

It did not matter. The full-time whistle blew and Venezuela players leapt into the air, substitutes running onto the pitch and throwing water, their progression to the quarter-final virtually assured.

Despite Venezuela’s admirable achievements, Cavani’s repeated failures in front of goal and Suarez’s behaviour on the touchline will be what lingers in the mind from this pulsating clash.