A staff sergeant and a senior airman have been punished after they were caught drinking alcohol at an Air Force base in Wyoming.

The pair, whose job it is to maintain a missile alert facility at the sensitive F.E. Warren Air Force Base, were off-duty at the time, the Air Force Times reported.

But consumption of any alcohol at the base, which houses nuclear weapons, is prohibited.

A spokesperson for the 90th Missile Maintenance Squadron A spokesperson said that the two workers ‘were not in contact [with], nor had any access to, weapons or classified material’ at the time of the incident, on May 14.

Officers at the base conducted an investigation, during which one of the two maintenance workers is alleged to have confessed.

Airmen from the 90th Missile Maintenance Squadron prepare a re-entry system for removal from a launch facility at F.E. Warren Air Force Base in Wyoming in this undated file photo

The rules in place at air force facilities forbid ‘processing or consuming alcoholic beverages… within the confines of any missile alert facility… while en route to or from duty in the missile complex.’

‘This is an unacceptable breach of standards and the Air Force held the airmen accountable for their actions,’ spokesperson Joseph Coslett said.

The military would not say what punishments the two men received.

The 90th Maintenance Group, to which the squadron belongs, is tasked with maintaining the Minuteman III intercontinental ballistic missiles that are on the base.

They also must keep an eye on the command and control systems used to launch them.

The Minuteman III is the only land-based ICBM currently in service in the United States.

Produced at a cost of $7million per unit, a Minuteman has a range of over 6,300 miles.

Each missile is capable of carrying up to three thermonuclear warheads. 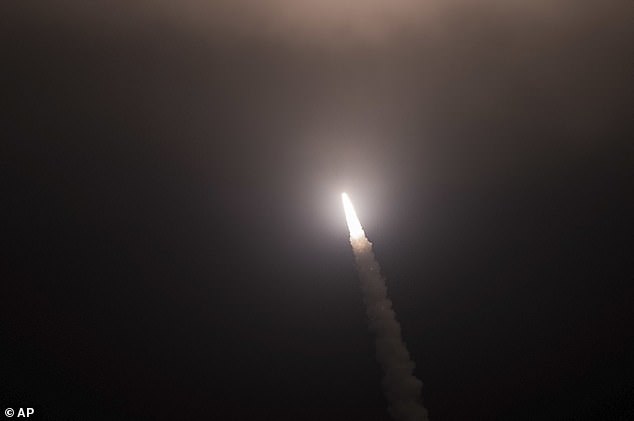 This is the second time in a year that soldiers at Warren have been busted for the use of mind-altering substances on the premises.

In May 2018, authorities discovered a drug ring that operated undetected for months at the base, where more than a dozen airmen entrusted with guarding nuclear missiles used LCD, cocaine, ecstasy and marijuana.

Air Force records showed they bought, distributed and used the mind-altering illegal drugs until one of the airmen serving at F.E. Warren Air Force Base slipped up and posted an incriminating photo on Facebook, which sparked an investigation that eventually led to courts martial and other disciplinary measures.

The service members accused of involvement in the LSD ring were from the 90th Missile Wing, which operates one-third of the 400 Minuteman 3 missiles that stand ‘on alert’ 24/7 in underground silos scattered across the northern Great Plains.