US Army is developing AR goggles for DOGS that displays directions to help them search areas for explosives, allowing soldiers to keep a safe distance form war zones

Dogs have been helping soldiers on the battlefield for decades and now they are about to receive an upgrade.

The US Army is giving its canine force augmented reality goggles that allows the handler to give specific directional commands while keeping a safe distance from the war zone.

The device has been customized to fit each dog, which displays indicators for them to follow – and the handler can see everything in the animal’s view.

The Seattle-based firm called Command Sight has designed a wired prototype, but is set to build a wireless version in the next phase of development.

‘AR will be used to provide dogs with commands and cues; it’s not for the dog to interact with it like a human does. This new technology offers us a critical tool to better communicate with military working dogs.’

Command Sight is working with the Army in developing the googles, which are currently in the prototype stage.

The device is currently wired, while a dog is on a leash, but the next phase will see a wireless version. 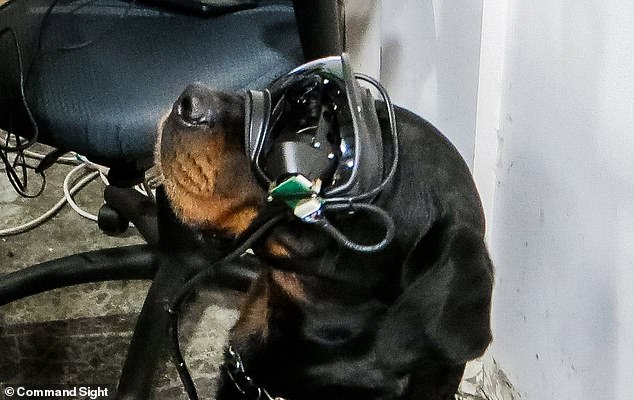 Dr. A.J. Peper, Command Sight founder, said: ‘We are still in the beginning research stages of applying this technology to dogs, but the results from our initial research are extremely promising.’

The team has been conducting tests with Peper’s Rottweiler, Matter.

‘His ability to generalize from other training to working through the AR goggles has been incredible,’ explained Peper.

‘We still have a way to go from a basic science and development perspective before it will be ready for the wear and tear our military dogs will place on the units.’

Special Force dogs typically relay on the hand signals of a human soldier, meaning they both must stay near each other.

The issue is, these animals are tasked with sniffing out bombs and hazardous material on the battlefield, which can be a dangerous place for humans.

However, the googles aim to offer an alternative.

‘The military working dog community is very excited about the potential of this technology,’ Lee said.

‘This technology really cuts new ground and opens up possibilities that we haven’t considered yet.’ 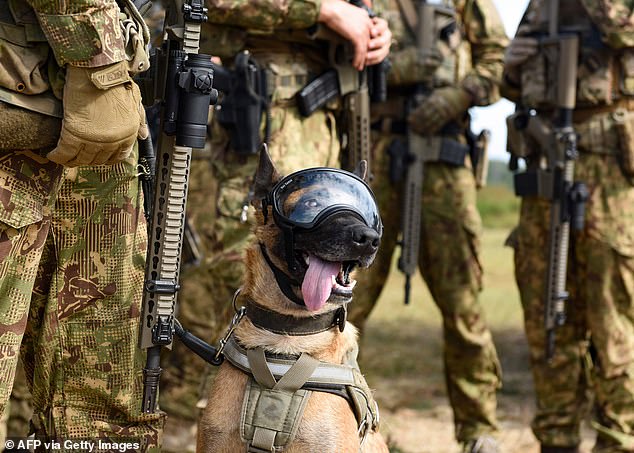 The US military began using canines in the battlefield during World War I, but the canines were not officially recognized until 1942. There are about 25,000 dogs currently in active service and more than 700 are deployed overseas

By leveraging a product dogs are comfortable wearing, Peper said it makes the technology adoption easier for both the dogs and the handler.

The Department of Defense Rapid Reaction Technology Office has provided funding for the next phase of development.

With that funding, Command Sight is now working with Navy Special Forces to build prototypes that will be tested on their military working dogs.

Each of the dogs received a 3D scan to get dimensional data to understand where to place optics and electrical components, specific to each dog.

The US military began using canines in the battlefield during World War I, but the canines were not officially recognized until 1942.

There are about 25,000 dogs currently in active service and more than 700 are deployed overseas.