US forces have killed forty people in a targeted missile attack on a jihadist training camp in Syria.

This is after they claimed the leaders of the Al-Qaeda-linked groups Hurras al-Deen and Ansar al-Tawhid were ‘responsible for threatening’ their country’s citizens – and aimed at their meeting.

The strike north of Idlib targeted leaders of the group the Pentagon calls Al-Qaeda in Syria (AQS) today.

Bitter-sweet: Demonstrators (pictured) gathered to protest against the air attacks of Assad Regime and Russia after performing the Friday prayer at the Bab al Hawa Border Gate in Idlib, Syria, a day before the US attack which killed 40 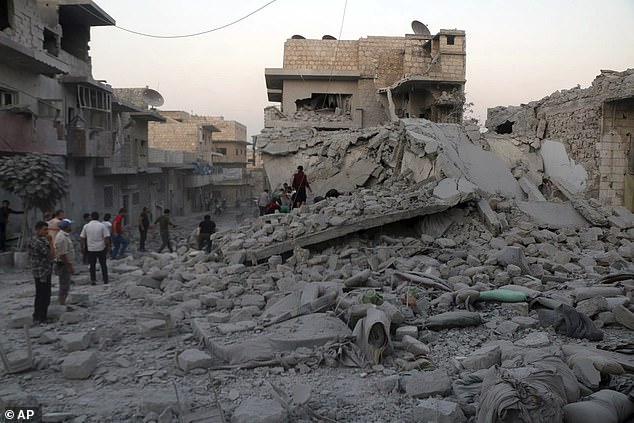 People are pictured searching for victims under the rubble of destroyed buildings which were hit by airstrikes in Maaret al-Numan in Idlib, Syria. Twelve people were killed and 34 were injured on August 28 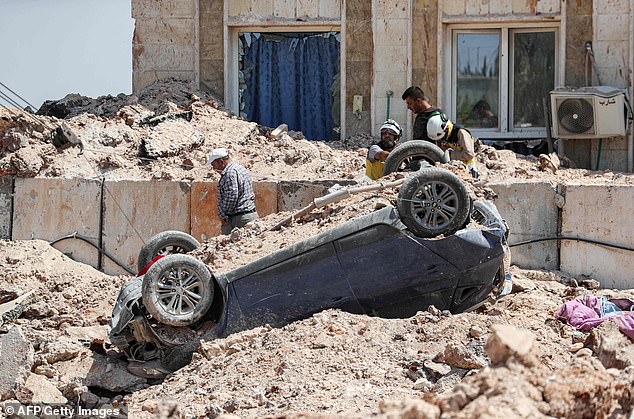 Members of the Syrian Civil Defence, used a winch to flip an overturned car outside a health facility which had been hit by a Russian air-strike two days before the US attack

These members were blamed for ‘attacks threatening US citizens, our partners and innocent civilians’, Lieutenant Colonel Earl Brown, a spokesman for the US Central Command said in a statement. He maintains that north-west Syria is a ‘safe-haven’ for AQ-S leaders to coordinate their activities to ‘destabilise’ the country.

‘With our allies and partners, we will continue to target violent extremists to prevent them from using Syria as a safe haven,’ he added.

No details were given but other reports say some 40 people died in the missile strike on a jihadist training camp – and it has not been said which weapons were used. 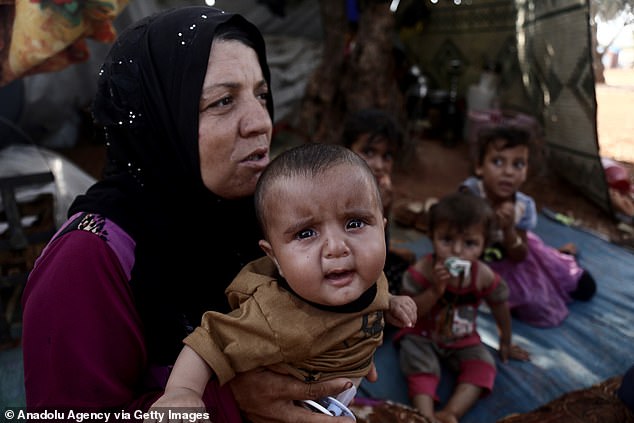 Around half of Idlib’s current 3million population are thought to be refugees from fighting in other areas of the country, who often sleep in camps that are vulnerable to bombing (stock image) 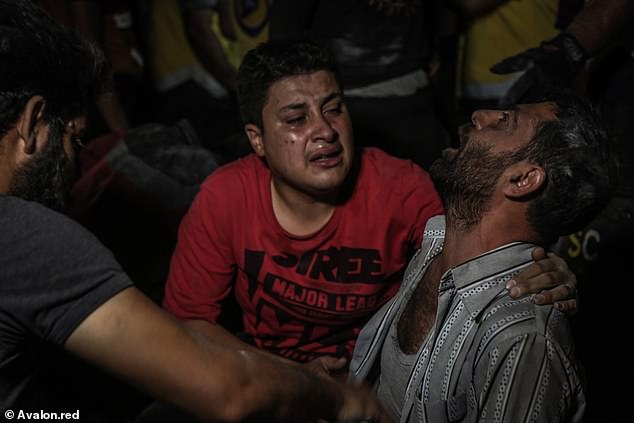 Syrian men grieve after an airstrike carried out by the Syrian government hit the area, killing at least 16 people including seven children two days ago

This comes two days after at least 16 civilians were killed by Syrian and Russian airstrikes in the region and Assad’s government seized three villages on the south eastern border.

Russian-backed Syrian forces have been fighting for nearly five months to wrest control of Idlib from jihadi rebel forces, which are led by Al Qaeda affiliate Hayat Tahrir al-Sham.

The province is the last rebel-held region in Syria, but is also home to some 3million civilians – around half of whom fled there amid fighting in the rest of the country.