US children are depicting scientists as female more than ever before

Children in the US are equating the jobs of scientists with women more than ever before, a study has found.

Researchers at Northwestern University have concluded that children’s stereotypical views linking men to scientists might have shrunk over the past five decades.

They analyzed 50 years worth of children’s artwork depicting scientists for the study, which encompassed the views of upwards of 20,000 children in the US.

The new study marks the first time ‘Draw-A-Scientist’ literature has been systematically reviewed.

‘Draw-A-Scientist’ literature is based on what children produce when they are asked to create an illustration of their idea of a scientist.

The first study on the topic was conducted from 1966 to 1977, and the results revealed that not even one percent of the 5,000 children involved associated the concept of a scientist with a female.

Almost all of the children’s drawings showed men working with lab equipment, and in many of the drawings the men had facial hair and wore in a lab coat and glasses.

But studies that took place from 1985 to 2016 indicated that the tide was turning, as an average of 28 percent of the children involved drew female scientists during that period.

Now, female scientists are being depicted more than ever, Northwestern researchers have said.

The researchers who worked on the new report also looked at how children develop stereotypes about scientists over time. 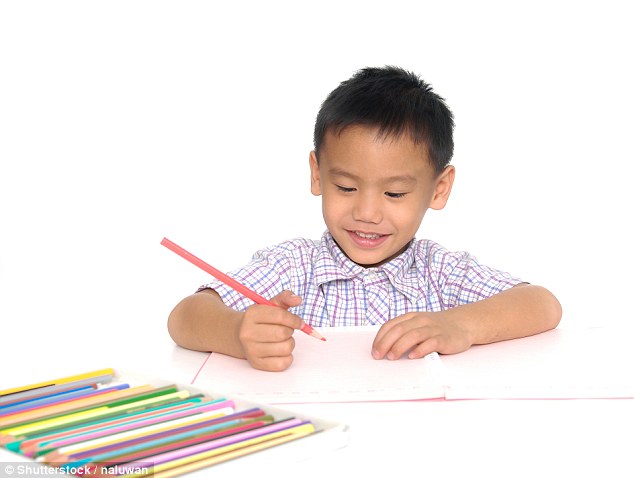 The report was based on ‘Draw-A-Scientist’ studies from the past five decades. The studies represent how children’s stereotypes of scientists have shifted over time (file photo)

They learned that children do not link science with men until they are in elementary school – at age five, the children involved in the study drew about the same number of female and male scientists.

But while the children were in elementary and middle school their tendency to depict male scientists ‘increased strongly’.

Additionally, the researchers found that the older children were more likely to depict scientists as people wearing lab coats and glasses, and this led them to the conclusion that children develop multiple stereotypes about scientists as they age.

The artwork evaluated for the new report was produced by children in elementary, middle and high school.

WOMEN IN SCIENCE: THE FACTS

Study author Dr David Miller said the new report highlights the potential that more women might, in the future, feel able to pursue a career in a scientific field.

She said: ‘Our results suggest that children’s stereotypes change as women’s and men’s roles change in society. Children still draw more male than female scientists in recent studies, but that is expected because women remain a minority in several science fields.’

David Uttal, a coauthor of the study, said that parents can play a key role in adjusting stereotypes that leave many children believing women cannot become competitors in scientific fields.

‘To build on cultural changes, teachers and parents should present children with multiple examples of female and male scientists across many contexts, such as science courses, television shows and informal conversations,’ Uttal explained.