The stock market has experienced strong economic growth while the inflation rate has hit the Federal Reserve’s target of two per cent for the third time this year.

US economic activity rose by 0.4 per cent in July, and also rose the same amount in June, fueled by strong job growth and tax cuts, according to The Commerce Department on Thursday.

In July US consumer spending increased 0.4 per cent fueled by strong job growth and tax cuts, with households spending more money on restaurants, accommodation and prescription medication, file image of customers browsing an Apple store in New York above

In July personal income, which provides the fuel for future spending increases, advanced by a moderate 0.3 percent after a 0.4 percent June increase. Modestly higher wages and salaries reflect an unemployment rate that has reached its lowest level in nearly 18 years.

The overall economy, as measured by the gross domestic product, grew at a 4.2 percent annual rate in the April-June quarter, which also reflected a solid rebound in consumer spending, after a lackluster performance in the first quarter.

Economists are forecasting that GDP growth will slow slightly to a still solid three percent rate in the current quarter, supported by continued gains in consumer spending.

‘We are watching consumer spending like a hawk because the economy won’t repeat the second quarter’s 4.2 percent fast pace without the consumer spending more of their tax cut money,’ said Chris Rupkey, chief financial economist at MUFG Union Bank in New York.

As for inflation, which is measured by the personal consumption expenditures (PCE) price index, it rose 2.3 per cent over the past 12 months, ending in July, marking the fastest year-over-year increase since 2012.

This means inflation has hit its highest level in six years. 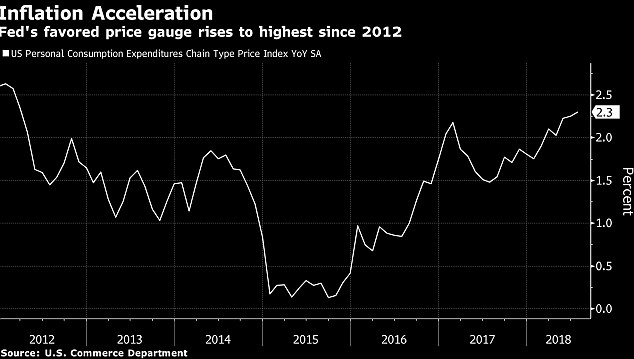 This graph shows the rise of inflation to 2.3 per cent, the highest it’s reached since 2012 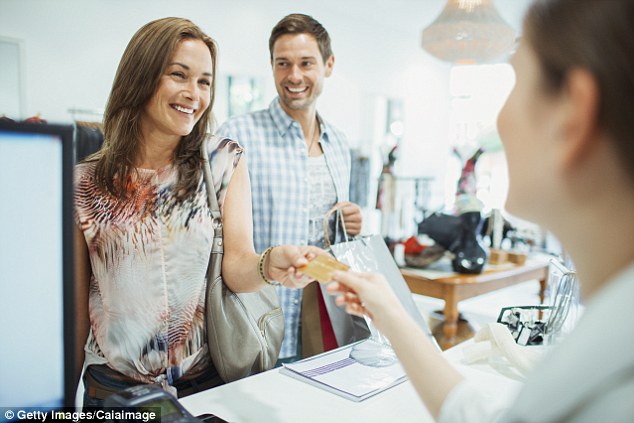 In July personal income, which provides the fuel for future spending increases, advanced by a moderate 0.3 percent after a 0.4 percent June increase

They are widely expected to keep gradually raising their benchmark rate, thereby leading to slightly higher rates on many consumer and business loans.

The inflation rise in July, after a 2.2 percent rise in June, was driven by rising energy prices. A gauge of core inflation rose 2 percent for the 12 months ending in July, up from a 1.9 percent year-over-year increase in June.

The Fed has raised its key rate twice this year and is projecting a total of four rate hikes for the full year, with the next one expected next month.

President Donald Trump has recently let it be known that he is unhappy with the continued rate hikes. Trump has complained that the rate increases, intended to prevent inflation from rising too fast, are making it harder for the administration to achieve its goal of accelerating growth.

Central bank officials have said they plan to continue raising rates at a gradual pace despite the Trump criticism.

The personal saving rate dipped slightly to 6.7 percent of after-tax income in July, down from 6.8 percent in June.

In a separate report, the Labor Department said the number of Americans filing application for unemployment benefits rose by 3,000 last week but remained at a still-low level of 213,000, indicating a strong job market. A four-week average for claims, which are a proxy for layoffs, fell to its lowest point in nearly 49 years.