The director of the Center for Disease Control and Prevention says COVID-19 cases could be brought under control in the United States within weeks if everyone immediately begins to wear a face mask.

Dr. Robert Redfield made the surprising statement during an interview with the Journal of the American Medical Association on Tuesday, despite the skyrocketing number of coronavirus cases across the country.

‘I think if we can get everybody to wear a mask right now, I really do think over the next four to six, eight weeks, we can bring this epidemic under control,’ he stated.

Redfield claimed mask-wearing was one of three essential practices – alongside social distancing and frequent hand-washing – that could drastically help reduce the number of COVID-19 infections.

‘If we all rigorously did this, we could really bring this outbreak back to where it needs to be,’ he stated.

The doctor’s declaration is surprising given that, as of Tuesday afternoon, almost 3.4 million Americans have tested positive to the virus, and more than 136,000 have died.

The U.S. has seen a record level of COVID-19 infections in recent days, with infection rates increasing in most states.

CDC director Dr. Robert Redfield says COVID-19 pandemic could be brought under control in the United States within two months if everyone immediately begins to wear a face mask

Many Americans have been reluctant to don face masks, saying there is little scientific evidence that they help to mitigate the spread of the coronavirus.

President Trump famously refused to wear a face covering until this past Saturday.

Redfield says he is thankful that the Commander-in-chief has now altered his behavior.

‘I’m glad to see the president wear a mask this week, and the vice president. Clearly, in their situation they could easily justify they don’t need to… but we need for them to set the example,’ Redfield stated.

‘Masking is not a political issue, it is a public health issue’. 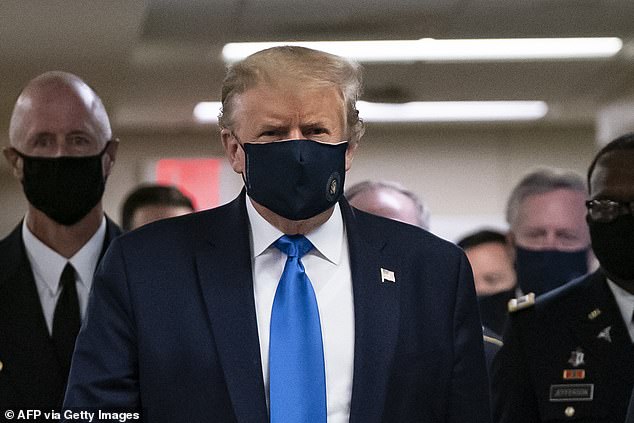 President Trump famously refused to wear a face covering until this past Saturday. He is pictured visiting the Walter Reed National Military Medical Center in Maryland 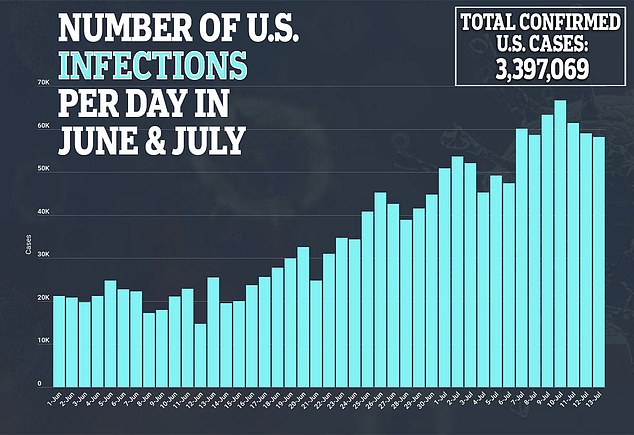 New cases also continue to rise with the US reporting over 400,000 infections for the week ending July 12, which was up 21 percent from the previous seven days

New cases continue to rise rapidly,  with the US reporting over 400,000 infections for the week ending July 12.

That number is up 21 percent from the previous seven days, according to a Reuters analysis of data from The COVID Tracking Project.

While Southern and Western states are seeing the biggest increase in cases, infections are also rising in the Midwest with Minnesota cases up 60 percent, Missouri up 40 percent and Iowa up 30 percent.

Daily infections across the US have broken records several times in recent days. 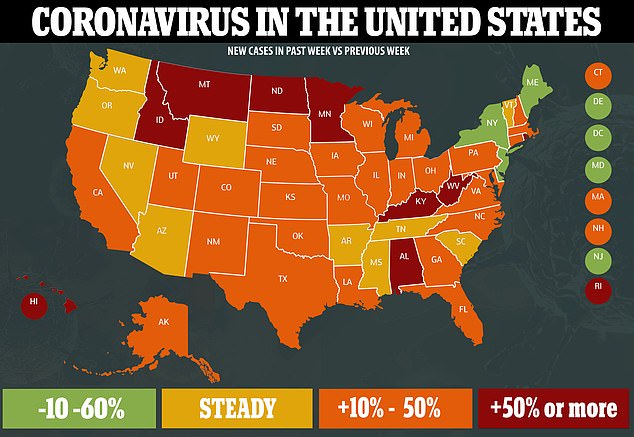 Meanwhile, health officials have been warning for weeks that deaths would surge again because the fatality rate lags several weeks behind infections.

A coronavirus death, when it occurs, typically comes several weeks after a person is first infected.

Data shows their dire predictions to be correct, with more than 5,000 people dying from the disease between July 6 and July 12, which is an increase of 46 percent compared to the previous week,

About a dozen states have reported increases in deaths for at least two straight weeks, including California, Florida and Texas.

In Texas, news deaths surged by 127 percent last week when it added 555 new deaths, bringing the total to just over 3,100.

Arizona’s deaths increased by 94 percent after adding 428 deaths. The hardhit state’s death toll was at 2,237 the week ending July 12.

Mississippi’s deaths spike by 92 percent last week compared to the previous week. The state added 138 deaths, bringing the total to just over 1,200.

In California and Florida – two of the other hot spot states – deaths surged by more than 60 percent last week.

Florida recorded 514 deaths in the week ending July 12, bringing total to over 4,300; and California reported 686 deaths, bringing the total to 7,000. Florida on Monday added a record 132 fatalities to its death toll. 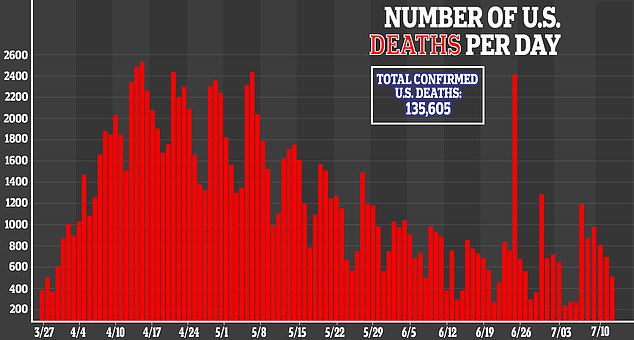