The COVID-19 death toll is nearing 150,000 after spiking by 10,000 in just 11 days with hotspot states Florida, California and Texas hitting record daily fatalities – as infections across the US plateau for the first time in two months but continue to spread across Midwest states.

The number of American who have died from coronavirus approached the 150,000 mark on Wednesday.

Nationally, COVID-19 deaths have risen for three weeks in a row while the number of new cases week-over-week recently fell for the first time since June.

A half-dozen states in the South and West reported single-day records for coronavirus deaths on Tuesday.

The hotspot states of California, Texas, California and Florida each reported record spikes in fatalities.

The number of American who have died from coronavirus approached the 150,000 mark on Wednesday after spiking by 10,000 in just 11 days with hotspot states Florida, California and Texas hitting record daily fatalities 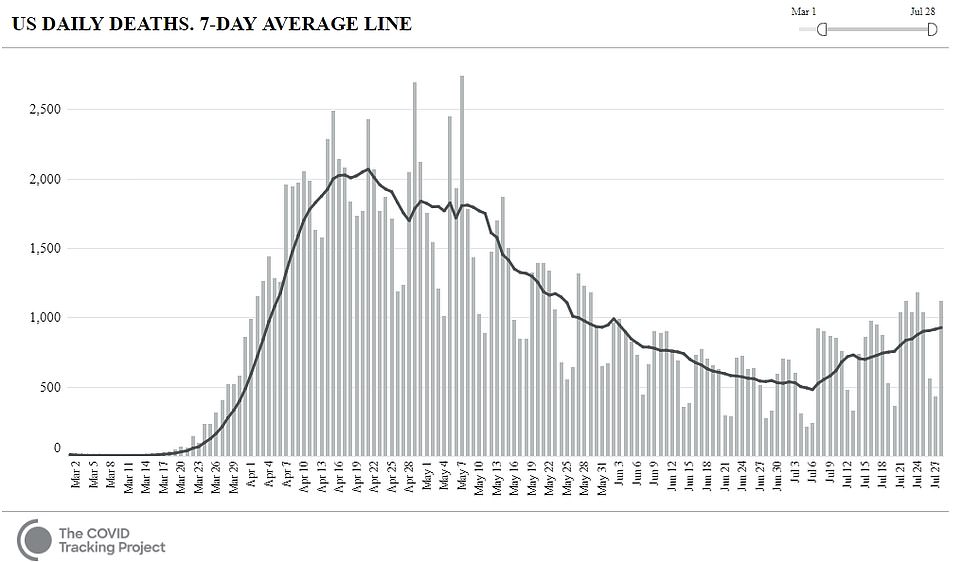 Nationally, COVID-19 deaths have risen for three weeks in a row while the number of new cases week-over-week recently fell for the first time since June

Texas leads the nation with nearly 4,000 deaths so far this month, followed by Florida with 2,690 and California with 2,500. The Texas figure includes a backlog of hundreds of deaths after the state changed the way it counted COVID-19 fatalities.

While deaths have rapidly risen in July in these three states, New York and New Jersey still lead the nation in total lives lost and for deaths per capita.

Even though deaths are rising across the US, they remain well below levels seen in April when an average of 2,000 people a day were dying from the virus.

Only three other states – California, Florida and New York – have more than 400,000 total cases.

A spike in infections in Arizona, California, Florida and Texas this month has overwhelmed hospitals and put the states in a dire situation.

There are signs the virus has also been spreading farther north in recent days, causing alarm among public health officials who fear states are not doing enough to avoid catastrophic outbreaks like those seen in the Sunbelt in the past two months. 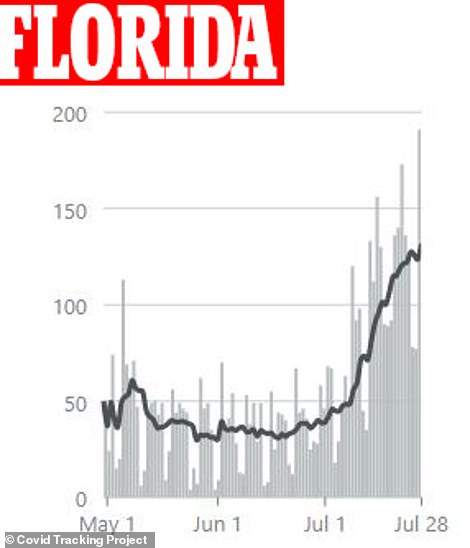 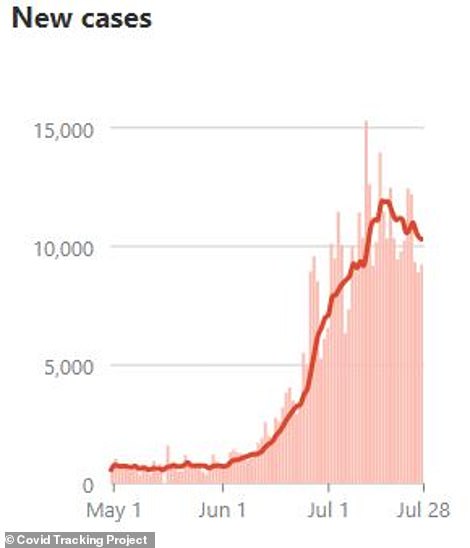 Florida reported its highest single day spike for COVID-19 deaths. The death toll in Florida increased by 186 on Monday, bringing the total number of deaths in the third-most populous US state to 6,117, according the state’s health department 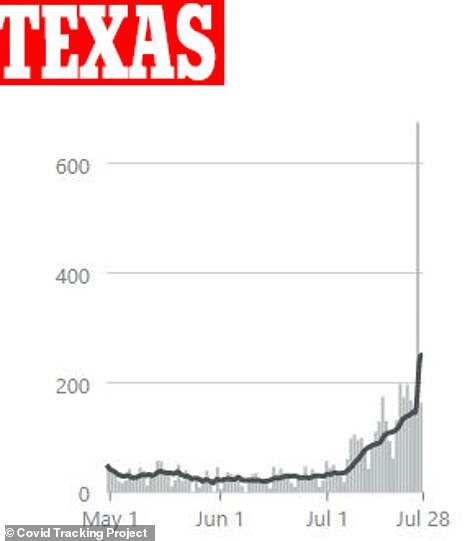 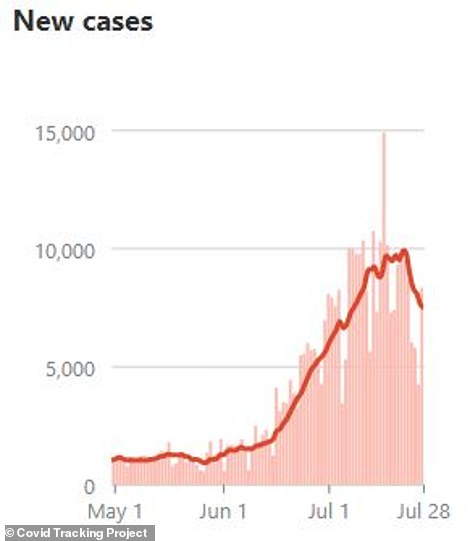 Texas leads the nation with nearly 4,000 deaths so far this month. The Texas figure includes a backlog of hundreds of deaths after the state changed the way it counted COVID-19 fatalities. Texas – the second-most populous state – added more than 6,000 new cases on Monday, pushing its total to 401,477 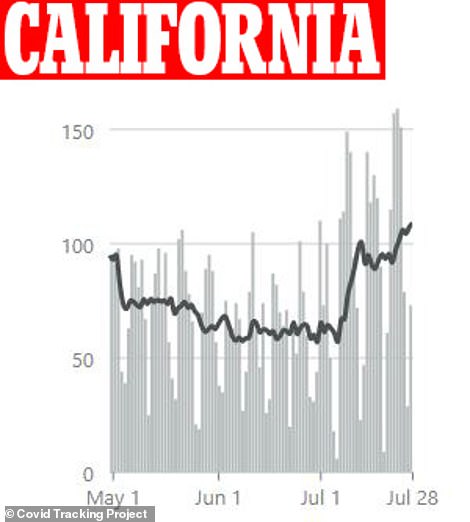 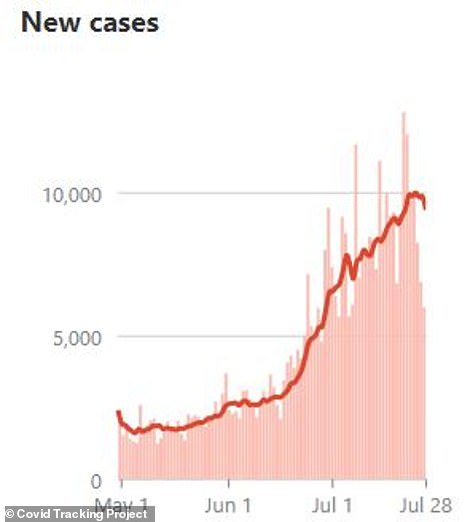 California on Tuesday reported 171 deaths. California health officials said Latinos, who make up just over a third of the most populous U.S. state, account for 56% of COVID-19 infections and 46% of deaths 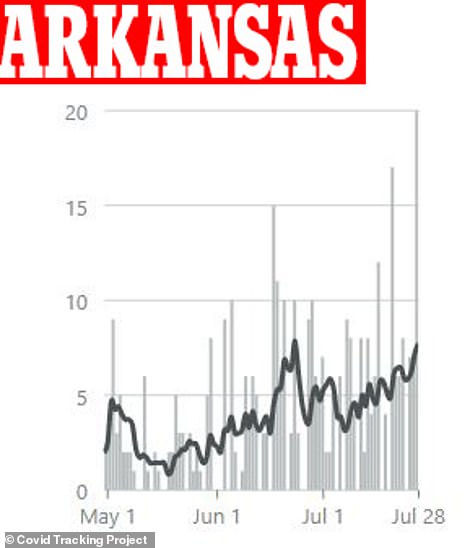 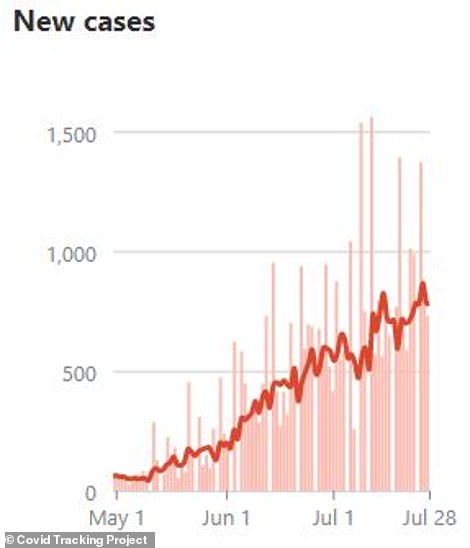 Arkansas reported 20 new deaths on Tuesday, bringing its total to 428. The state reported 734 new cases, bringing the total to 40,181 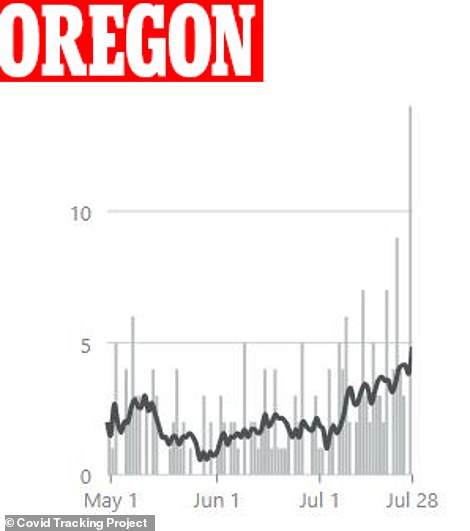 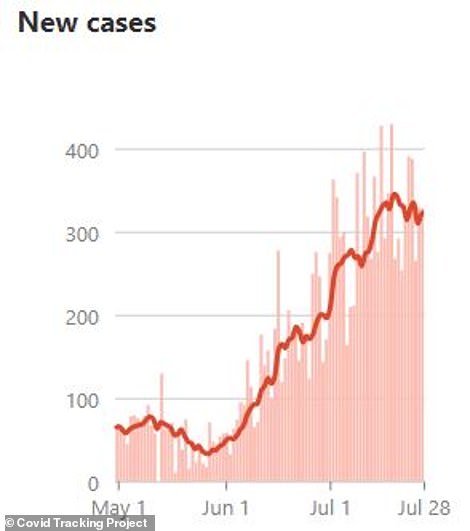 Oregon recorded a record spike of 14 new deaths on Tuesday, bringing its total to 303. The state reported 328 new cases, bringing the total to 17,416 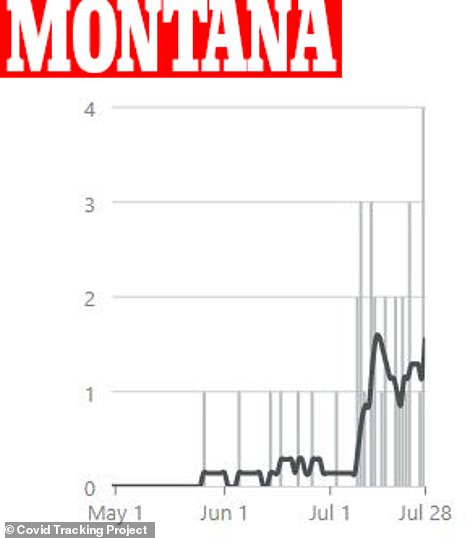 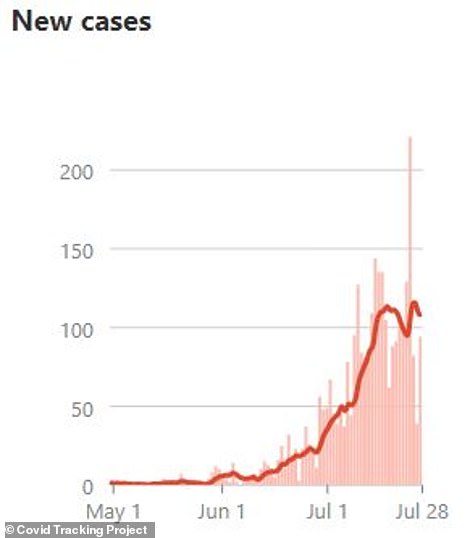 Dr Anthony Fauci and Dr Deborah Birx, both White House task force members, have said there are signs the virus could be peaking in the South and West while other areas were on the cusp of new outbreaks.

‘We are watching very carefully California, Arizona, Texas, and most of Florida,’ President Donald Trump said at a news conference on Tuesday. ‘It’s starting to head down to the right direction.’

The US is showing early signs that surging case numbers may be leveling out with week-over-week tallies showing infections have dropped two percent for the first time after rising steadily for five weeks.

Infections have been surging since early June when COVID-19 started spreading rapidly throughout the Sunbelt states and the US recorded single daily highs of more than 77,000 infections.

The seven-day average for daily infections this week is now just under 66,000.

The downward trend in cases is prominent in the hotspot states of Florida, Texas, Arizona and California where governors and local officials rolled back reopenings to curb the infection rate.

But even as cases start to plateau in those hard-hit states, 22 other states are currently seeing an increase in new infections.

Cases are mostly rising in the Midwest, which public health officials say is a sign the virus is spreading north from the Sunbelt states.

Fears are growing about the potential for a significant uptick in the Midwest, including Minnesota, Wisconsin, Ohio, Indiana and Colorado, which has been fueled largely by a rise in cases among young adults, who have been hitting bars, restaurants and health clubs again.

Republican governors in Tennessee, Mississippi, Missouri and South Carolina have all resisted calls to close bars and gyms or issue statewide mask requirements, though some local officials have imposed some of their own restrictions.

Those two efforts and other best practices would help ‘prevent the resurgence that we’ve seen in some of the other Southern states.’ 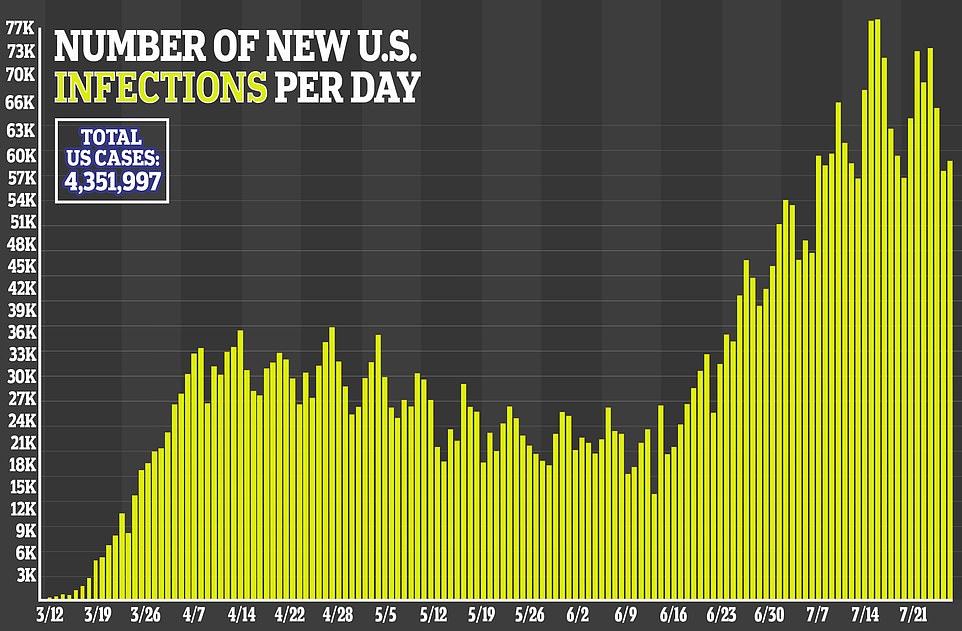 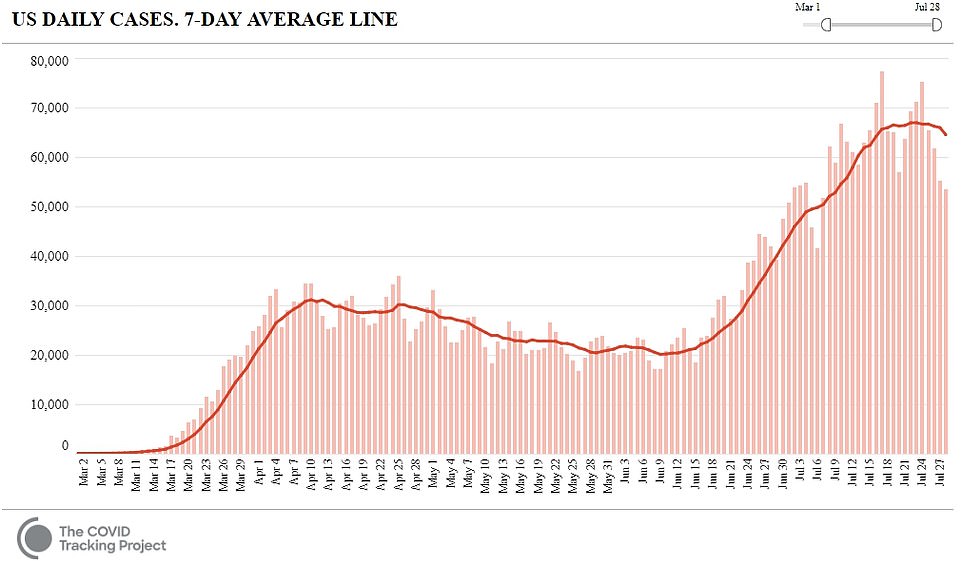 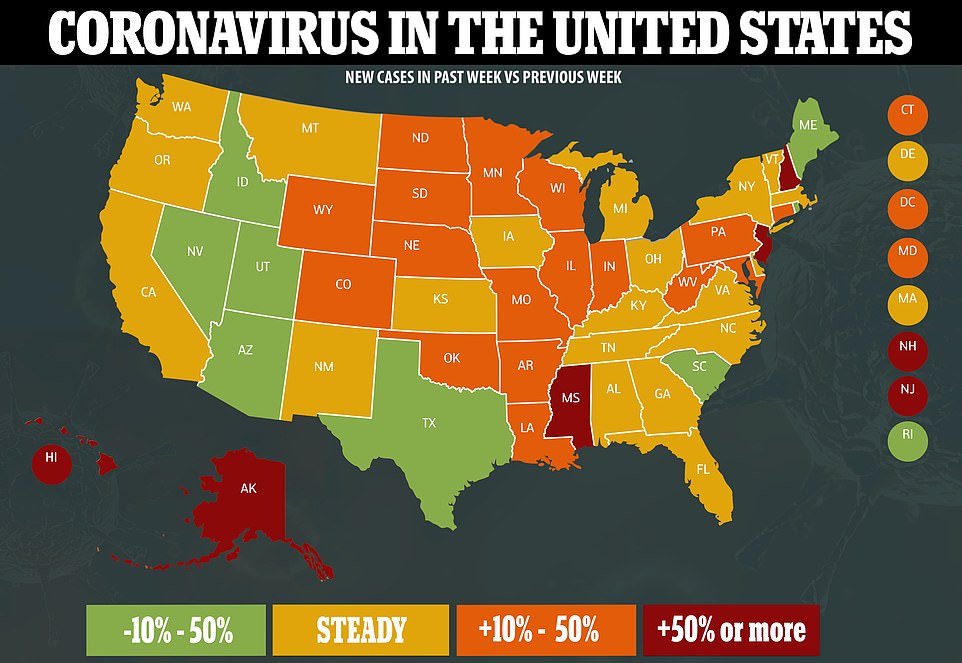 New coronavirus cases across the United States have started to decline for the first time in five weeks. The downward trend in cases is prominent in the hotspot states of Florida, Texas, Arizona and California. But even as cases start to plateau in those hard-hit states, 22 other states – mostly in the Midwest – are currently seeing an increase in new infections

Over the past two weeks, Wisconsin’s rolling average number of new confirmed cases has increased by 31%. Minnesota reported its largest one-day case count Sunday, with more than 860 cases.

In Mississippi, nine of the state’s biggest hospitals had no open intensive care beds as of Monday, and officials are considering opening pop-up facilities. More than 24% of coronavirus tests have come back positive in Mississippi over the past week, the highest rate in the nation and triple the national average.

In Missouri, larger cities are growing rattled by a spike in cases after the state fully reopened. It reported another daily record in cases, with nearly 1,800. St. Louis is curtailing bar hours and reducing restaurant seating capacity starting Friday, and Kansas City may follow suit.

Oklahoma Gov. Kevin Stitt returned to his office Monday after two weeks of isolating at home following a positive coronavirus test. It came on the same day the state reported over 1,400 new confirmed cases – the second consecutive day of record highs.

The rise in deaths and infections has dampened early hopes the country was past the worst of an economic crisis that has decimated businesses and put millions of Americans out of work.

The trend has fueled a bitter debate over the reopening of schools in the coming weeks. President Donald Trump and members of his administration have pushed for students to return to class, while some teachers and local officials have called for online learning. 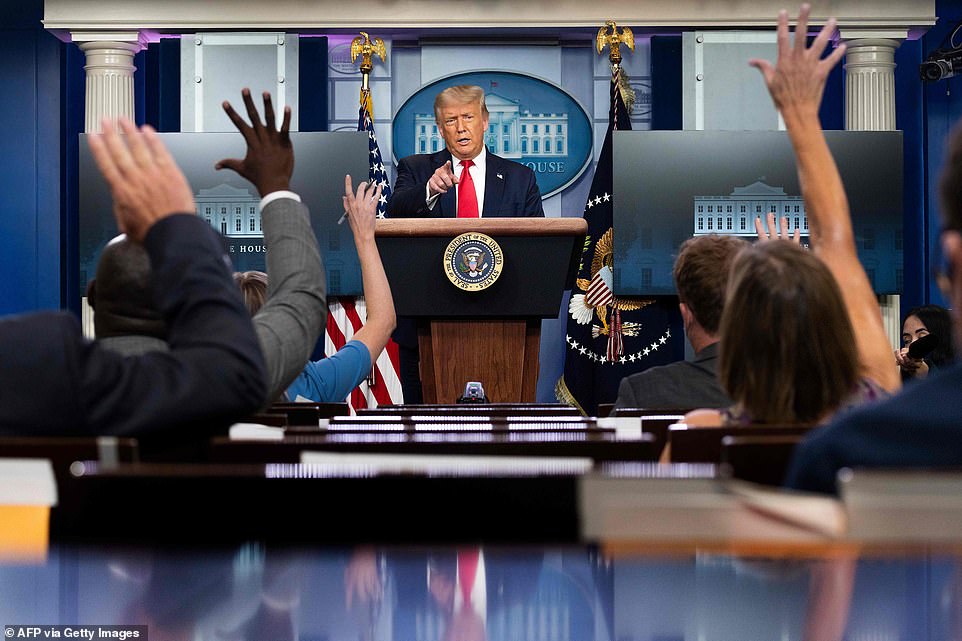 ‘We are watching very carefully California, Arizona, Texas, and most of Florida,’ President Donald Trump said at a news conference on Tuesday. ‘It’s starting to head down to the right direction.’

‘We will fight on all fronts for the safety of students and their educators,’ Randi Weingarten, president of the American Federation of Teachers, said during the union’s virtual convention on Tuesday. ‘It’s the 11th hour; we need the resources now.’

The Texas Education Agency, the state’s overseer of public education, said it would deny funding to schools that delay in-person classes because of orders by local health authorities related to the pandemic.

Local health leaders in the biggest metropolitan areas in Texas, including Houston and Dallas, have recently ordered the postponement of in-person classes.

In Washington, some Republicans in the US Senate pushed back against their own party’s $1 trillion coronavirus relief proposal the day after it was unveiled by Majority Leader Mitch McConnell, weighing on stocks.

Democrats have rejected the plan as too limited compared with their $3 trillion proposal that passed the House of Representatives in May. Some Republicans called it too expensive.

Trump said on Tuesday he did not support everything in the Senate Republican coronavirus relief legislation but would not elaborate.

‘There are also things that I very much support,’ he told a White House briefing. ‘But we’ll be negotiating.’

Trump also groused about Fauci’s high approval ratings and joked ‘nobody likes me’ as he struggles to improve his standing with voters over his handling of the coronavirus pandemic.

‘It can only be my personality,’ Trump said.