US couple transform white van into a home to save money

A couple who are both qualified medics have found an ingenious way of getting around paying rent and quenching their wanderlust – by travelling across America in a refurbished white van.

Married healthcare professionals Justin, 28, and Betsy Woods, 26, from Oregon and Utah respectively, say their unusual home – a refurbished 2005 Dodge Sprinter van – is the perfect way for them to work, sightsee and save money.

Keen travellers, the couple have documented life on the road in their blog, which reveals how they spent nearly $5,000 (£3,800) creating a bespoke kitchen and sleeping area in the van – and even find room to bake cakes and play the piano.

Have van, will travel: Justin, 28, and Betsy Woods, 26, from Oregon and Utah respectively, decided to convert their 2005 white Dodge Sprinter van into a ‘tiny home’ after feeling the pinch of rent and student loans 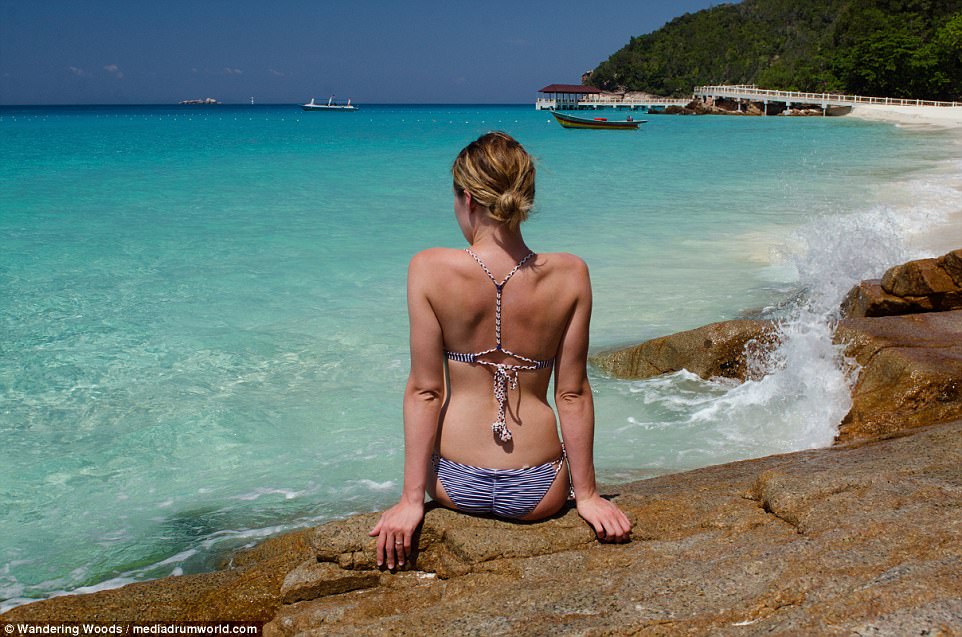 The couple, who’ve travelled all over the world, say that it’s perfectly possible to be a ‘working professional’ and live out of a van – while seeing some of America’s most beautiful sights along the way 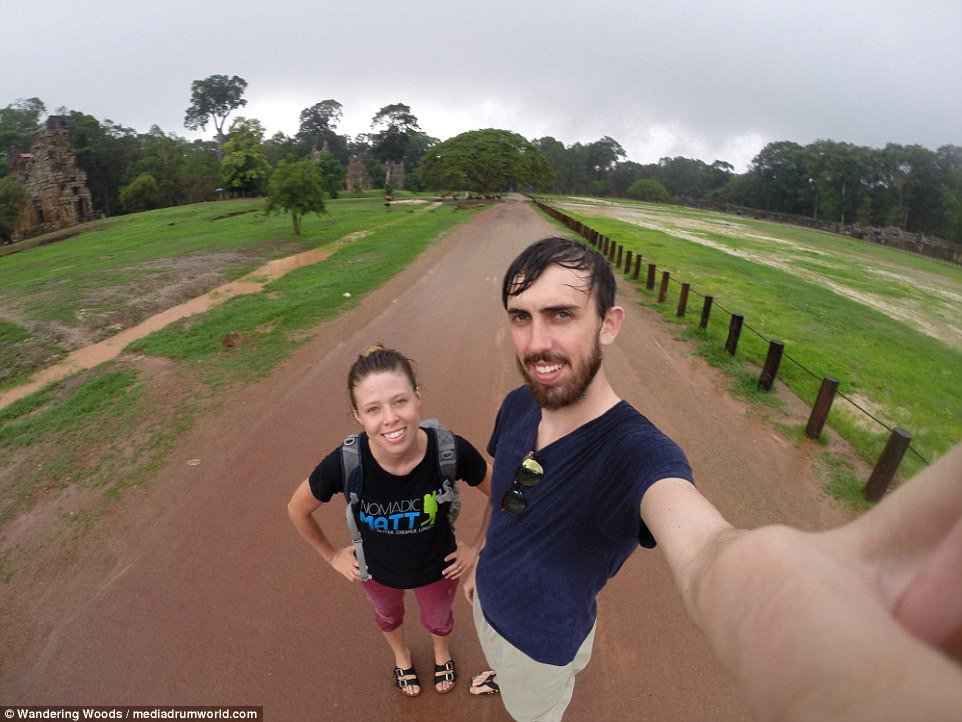 The  thrifty pair used free evenings and days off to renovate the van, which cost $5,000  (£3,800) to transform, installing a kitchen, bedroom and even a closet for their scrubs

By day, Justin works as a family medicine resident and Betsy is a paediatric nurse in ER but at night they retreat to their very intimate home, which has a bedroom at the van’s back, a single-door closet and a kitchen they installed themselves.

The fitted wood and cream-coloured kitchen even has its own double burner range so the pair can bake on the road – and a fully-functioning sink for the washing up. An electric water pump brings fresh drinking water in – but there is no bathroom.

It took the couple six months to complete the refurbishment, as they both worked full-time and Betsy was finishing her Master’s degree.

The pair first decided to move into their van because they wanted to avoid high rent prices and to save money to pay off their student debt. 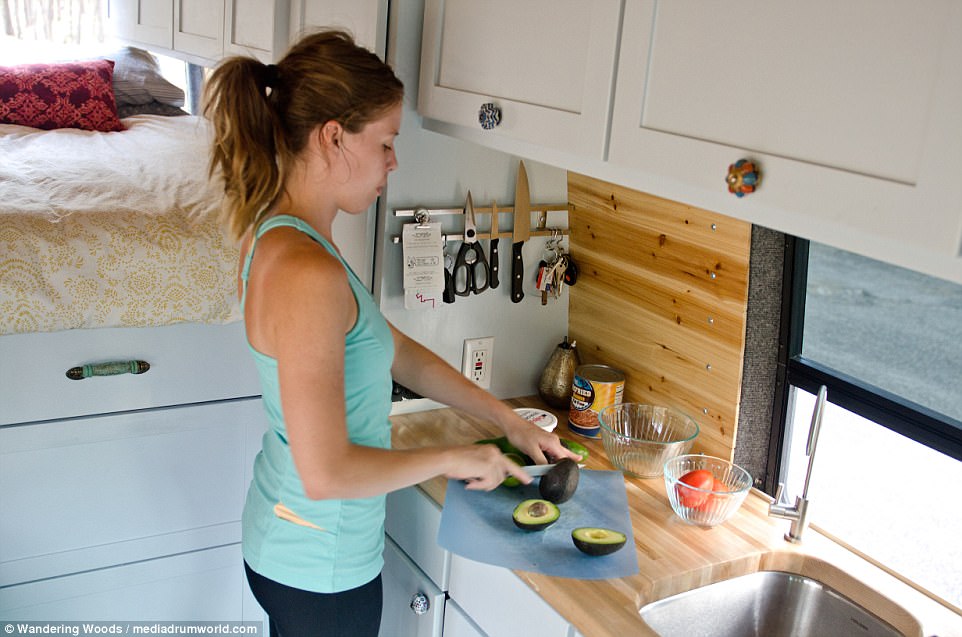 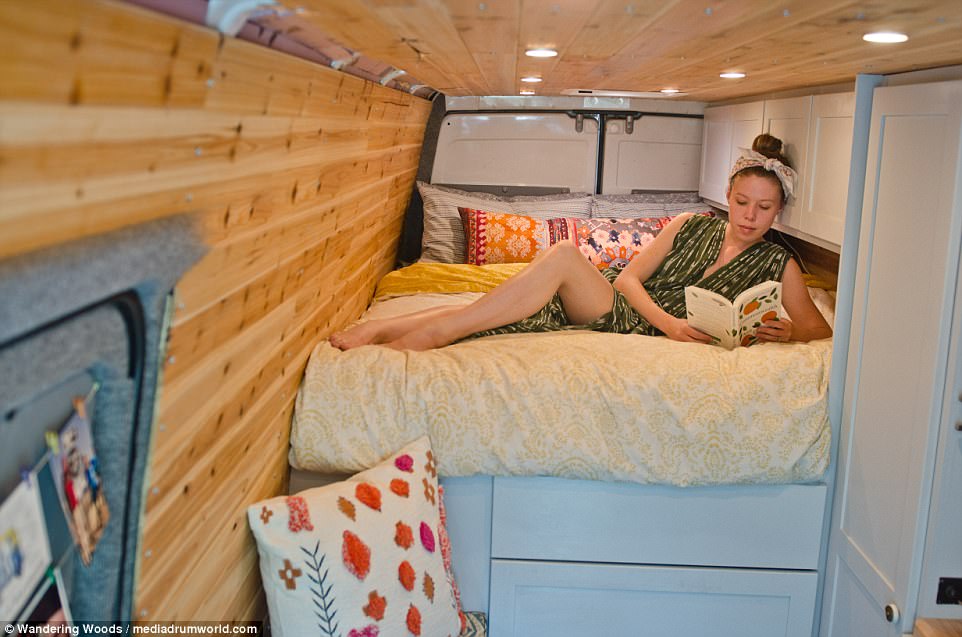 The bedroom area has drawers which Betsy uses to house her keyboard, meaning the pair can still play piano while on the road 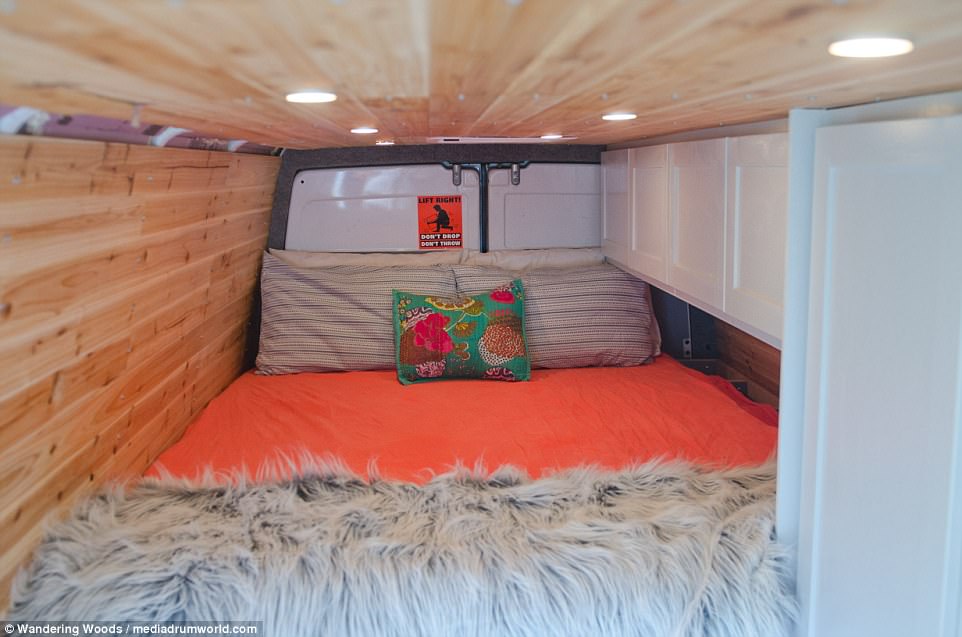 Well, it’s intimate! The back doors of the Dodge van double up as a headboard for the couple

‘The thought of being able to hit the road anytime and basically bring along a tiny house won me over. Then we began to discuss the possibility of actually moving into it, sort of joking at first, but then seriously,’ says Betsy.

‘Being able to save a significant amount of money on rent to put towards our student loans and still have money for travel was an opportunity we couldn’t pass up.’

Next to the kitchen is the bed, where the couple retreat for sleep after working long shifts. Storage isn’t a problem, drawers pull out from under the bed and there’s even a closet which holds the scrubs the pair use for work. 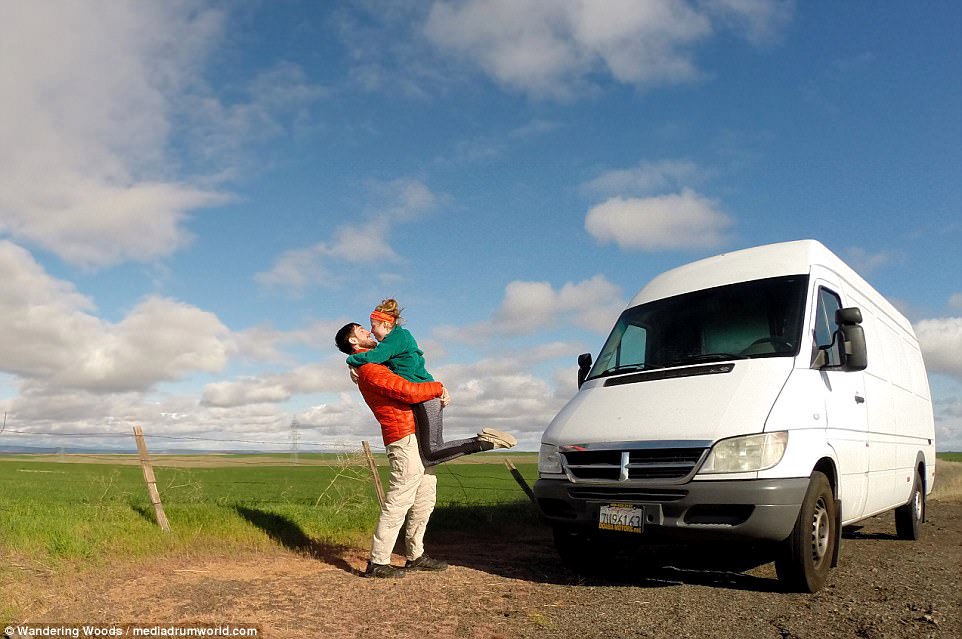 The couple have visited multiple American states and Canada on their adventures and plan to do more travelling when Justin, a family medicine resident, finishes his contract next year 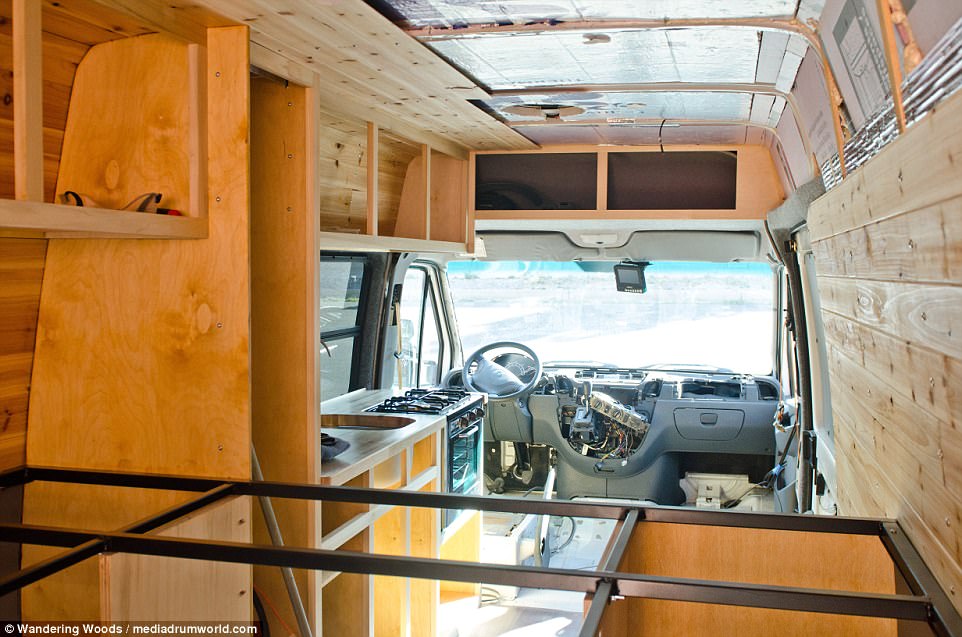 Mid-way through the renovation: the couple endured a tough winter while working long shifts and trying to build their unique home 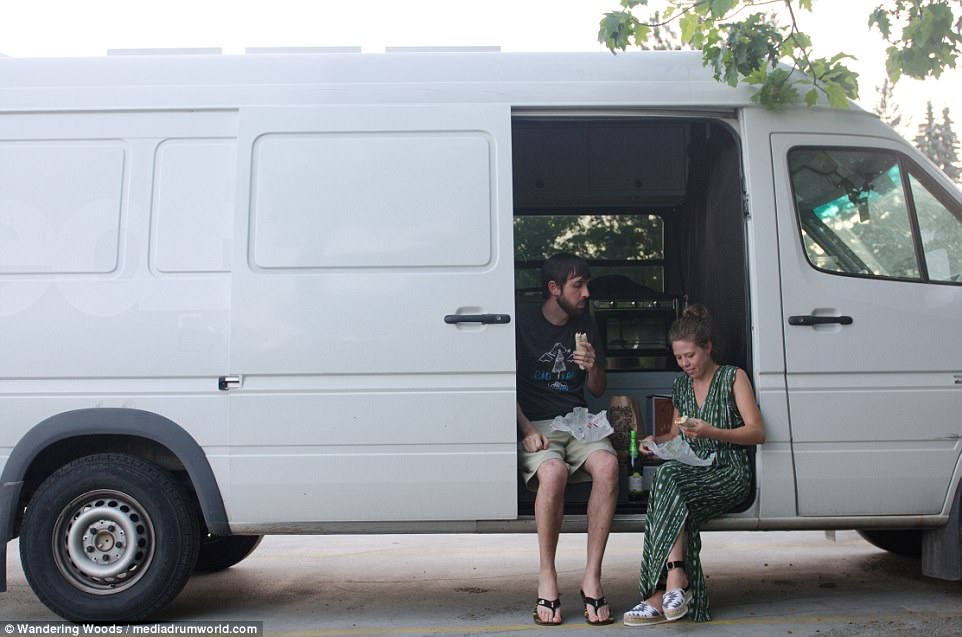 So far the couple have clocked up 10,000 miles and plan to discover parts of America they haven’t yet visited in 2018

She continues: ‘Having fewer things and living in a home we can take anywhere gives us a lot of freedom, which we absolutely love.

‘When you’re tied down to a house, things, or a specific place, it can make it hard to travel. Living like this really opens the doors to spontaneity, which often leads to the best adventures.’

Betsy adds: ‘When Justin finishes his residency next summer, we intend to take travel contracts in various states to finish paying off our student loans.

‘Doing so will enable us to travel around the US while also allowing us to take off time in-between jobs to travel internationally.

The couple spent evenings and any days off working  on refurbishing the van and endured a long winter of trying to get their mini house ready. 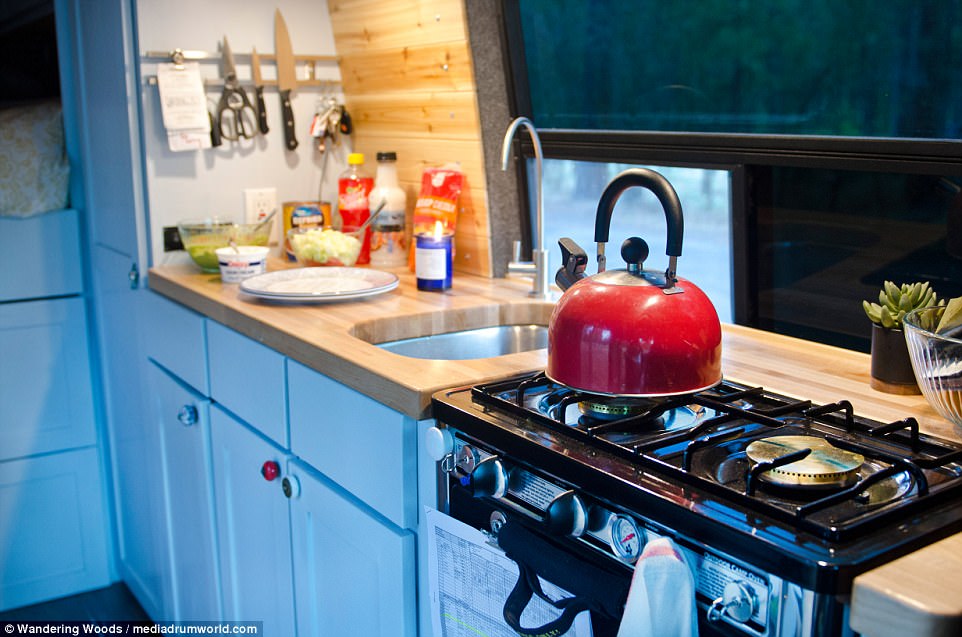 A cup of char? The fitted kitchen comes with a double burner oven so the couple can bake 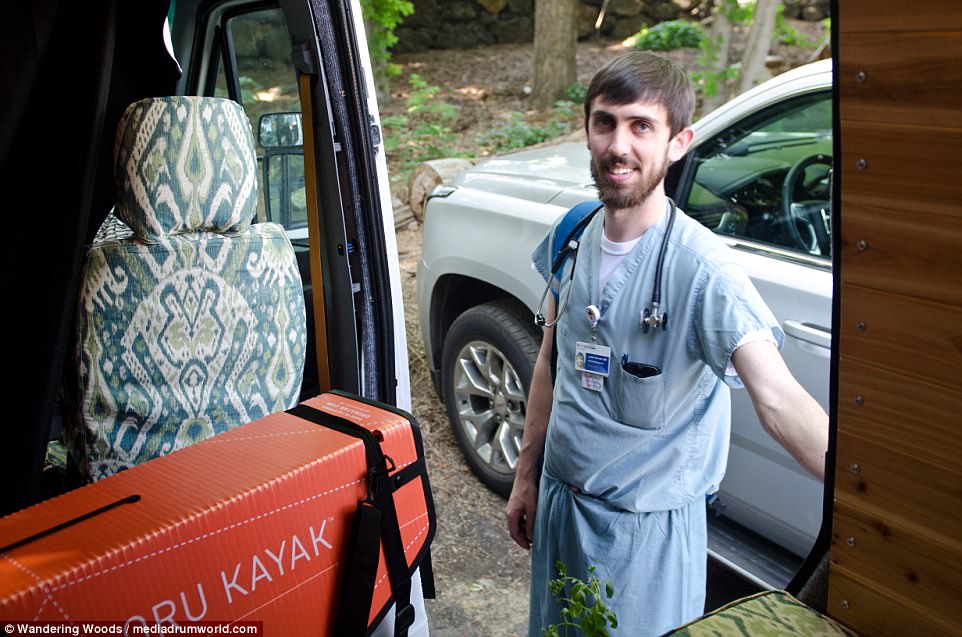 Off to work! Justin prepares for a day at the hospital and says the only major convenience the couple miss is a bathroom 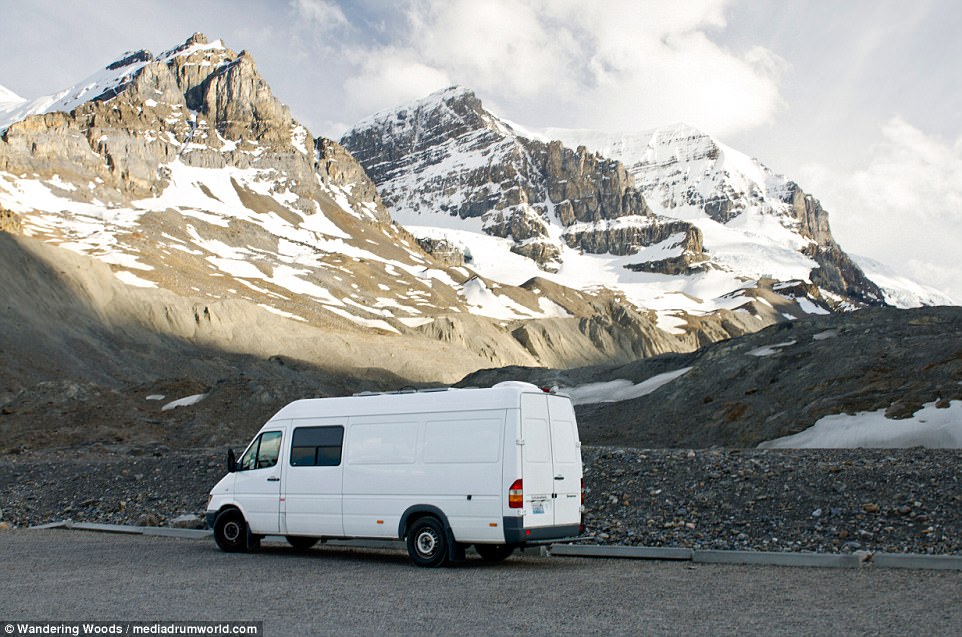 Van with a view: the Dodge pictured next to Canada’s snow-capped peaks, one of the couple’s ports of call so far

Betsy continues: ‘There are pros and cons to living in the van. We don’t have a bathroom, which is definitely the biggest inconvenience we’ve had to face, but there have been other really great things about living in the van.

‘For example, we know where all our stuff is and we get out and do more things. Plus, living in the van has enabled us to have so many great conversations with people that we wouldn’t have had otherwise.’

So far the couple have clocked up 10,000 miles on the road, and plan to add to this soon.

Betsy and Justin want to show others that it is possible to be a working professional and still live the van life.

‘We want to convey that you can have this lifestyle as a working professional. Sure, we’d love to be traveling full time, but that’s not a possibility for us right now and we know there’s other people in the same situation,’ she added.

‘We’ve managed to modify this kind of lifestyle to work for us and we want to show other people that they can do it too.

‘People are usually pretty surprised, because when they hear that we’re living in a van they expect the inside to be pretty basic.’