Daily Covid infections and deaths are beginning to surge in the U.S. after over a month of little movement – signaling that a summer surge fueled by the BA.5 variant could now be under way.

America is averaging 649 daily deaths from Covid, a 97 percent increase over the past week. It is the largest seven day increase in deaths since early December.

Recorded infections have made a leap as well, to 136,903 per day. It is a 24 percent increase over seven days and the largest daily case average since February – when America was coming down off of the largest Covid surge of the pandemic.

These sharp increases are being attributed to the BA.5 variant. The highly infectious strain of the virus that has quickly taken over as the dominant strain in the United States.

While more mandates related to the virus are not expected in the near future, Dr Anthony Fauci, America’s top infectious disease expert, once again recommended Americans wear masks in indoor public gatherings during on Tuesday.

According to most recent data from the Centers for Disease Control and Prevention (CDC), the BA.5 strain now makes up 65 percent of active cases in the U.S. 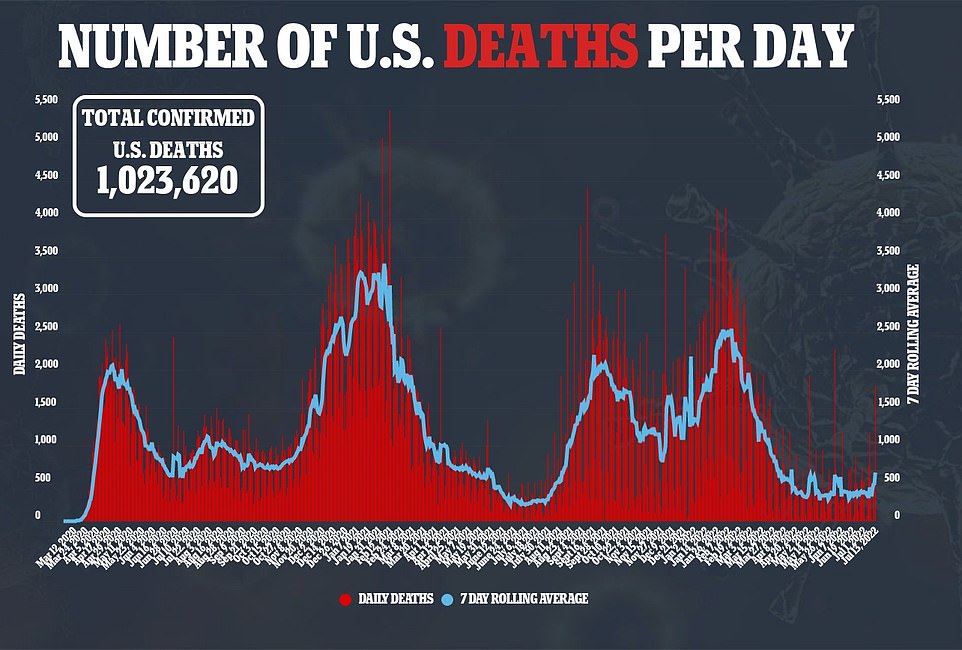 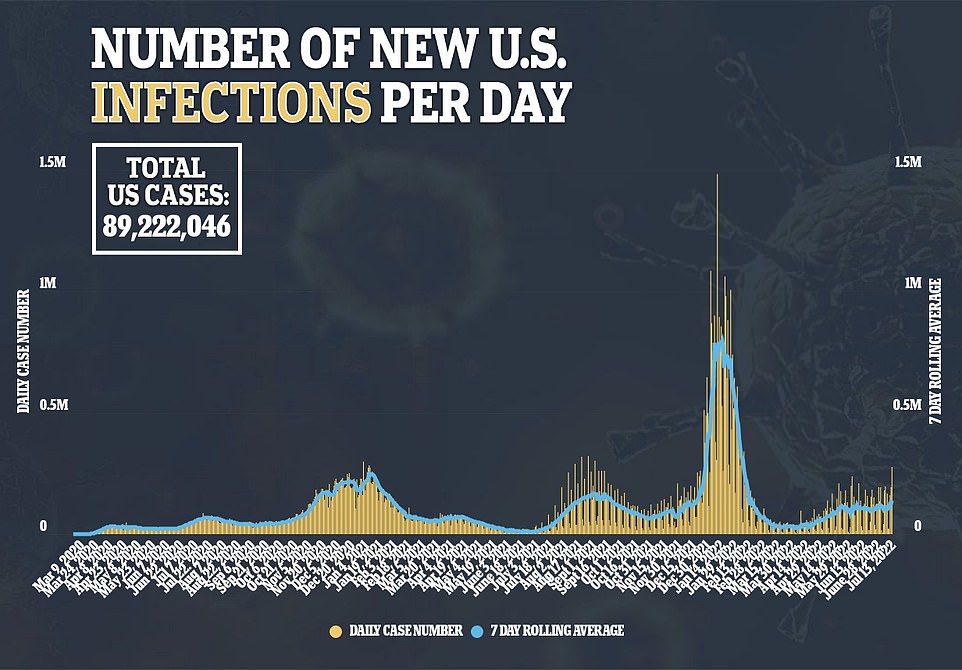 ‘[BA.5 is] something we absolutely need to take seriously. It has a transmission advantage over the prior variant that were dominant,’ Fauci told MSNBC.

The variant is believed to be the most infectious form of Omicron to arrive yet. Early data from South Africa – where it was first detected – also shows it may have the ability to evade natural Covid immunity provided by previous infection.

This is especially dangerous as it means many people who believe they are temporarily safe from Covid due to a previous infection are suddenly vulnerable once again.

It arrived alongside the BA.4 variant – also detected earlier this year in South Africa – which now makes up 16 percent of cases, per CDC data.

The BA 2.12.1 variant that was dominant before BA.5 now makes up just 17 percent of cases, being snuffed out by the two new strains.

The rampant spread of the two new strains, along with the rising cases that have come with it, have officials like Fauci recommending that Americans bring back some Covid measures they may be already-to-familiar with from the past two years.

‘Everybody wants to put this pandemic behind us and feel and hope that it doesn’t exist. It does, the good news is we have the capability and the tools to address it, and we need to utilize those tools,’ Fauci, who serves as director of the National Institute of Allergy and Infectious Disease said.

‘For example, getting vaccinated if you’re not primarily vaccinated. If you’re do for a booster, get a booster.

‘And if you’re in an area of high dynamic of infection – and were talking about mandating anything – but recommending people when they are in indoor congregate settings to wear a mask. Those are simple doable things that can help prevent us from even having more of a problem then we are having now.’ 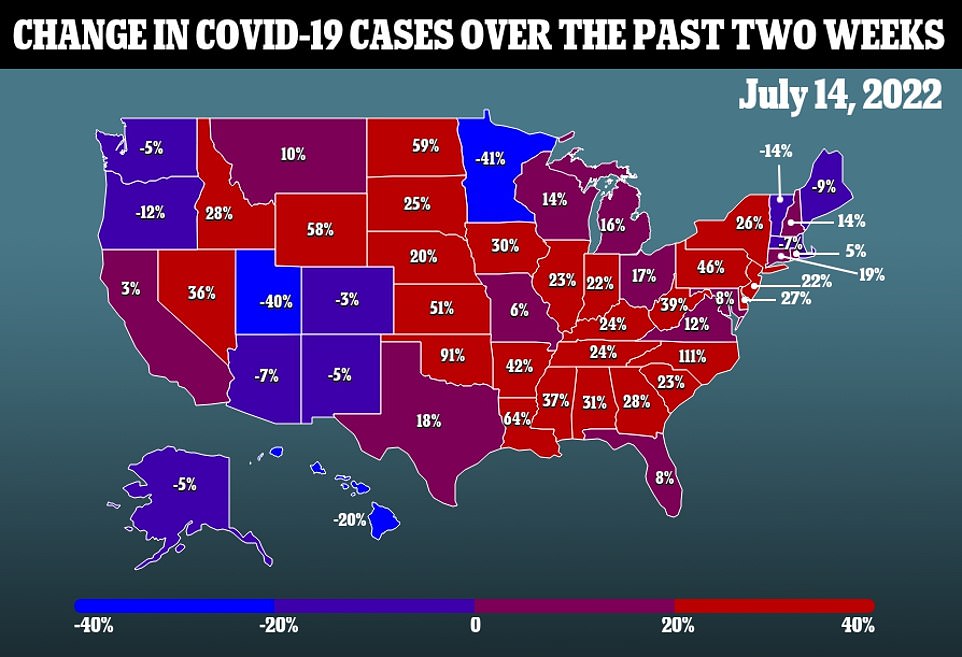 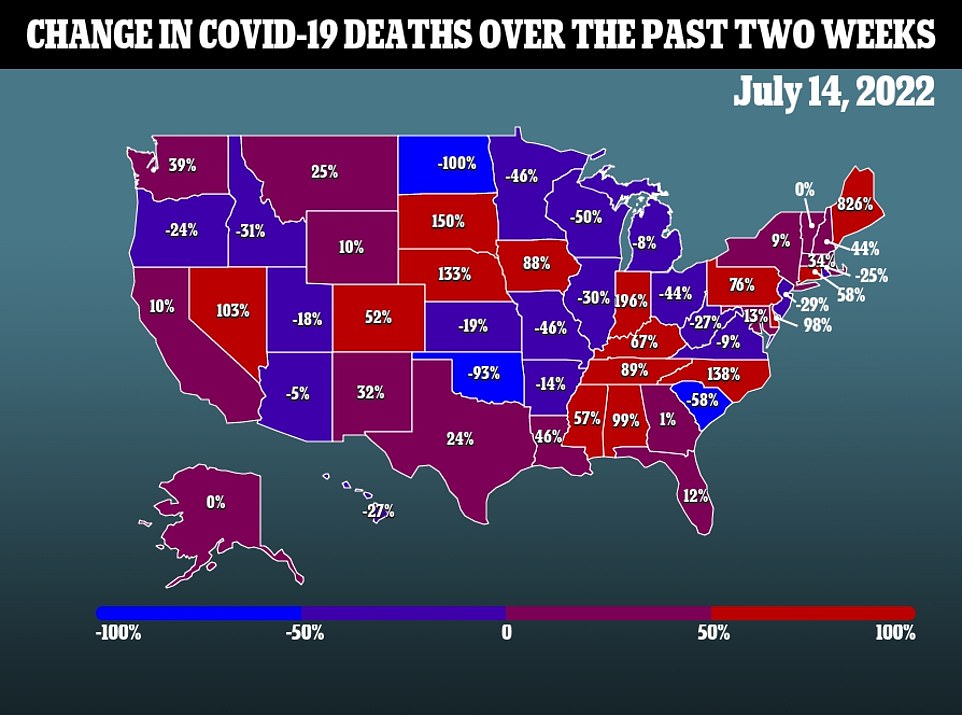 Booster shots will likely soon include newly formulated jabs meant to target the Omicron variant, as vaccine manufacturers aim to roll out new shots in the coming months.

Currently available shots were formulated to fight the original Wuhan strain of the virus that erupted across the world at the start of 2020.

The virus has mutated greatly in the time since, and the Omicron variant-family has the ability to evade protection from infection provided by those shots.

Some experts disagree that shots tailored to Omicron are necessary, though, as the protection against severe infection, hospitalization and death by the original shots is still effective against the highly infectious strain.

The states suffering the most during this recent Covid wave are New Mexico and Nevada. Both desert states are averaging around 0.3 daily deaths per every 100,000 residents.

Daily Covid infections – a figure which often precedes increases in deaths by a few months – are increasing the most in North Carolina, where daily infections have doubled over the past week. 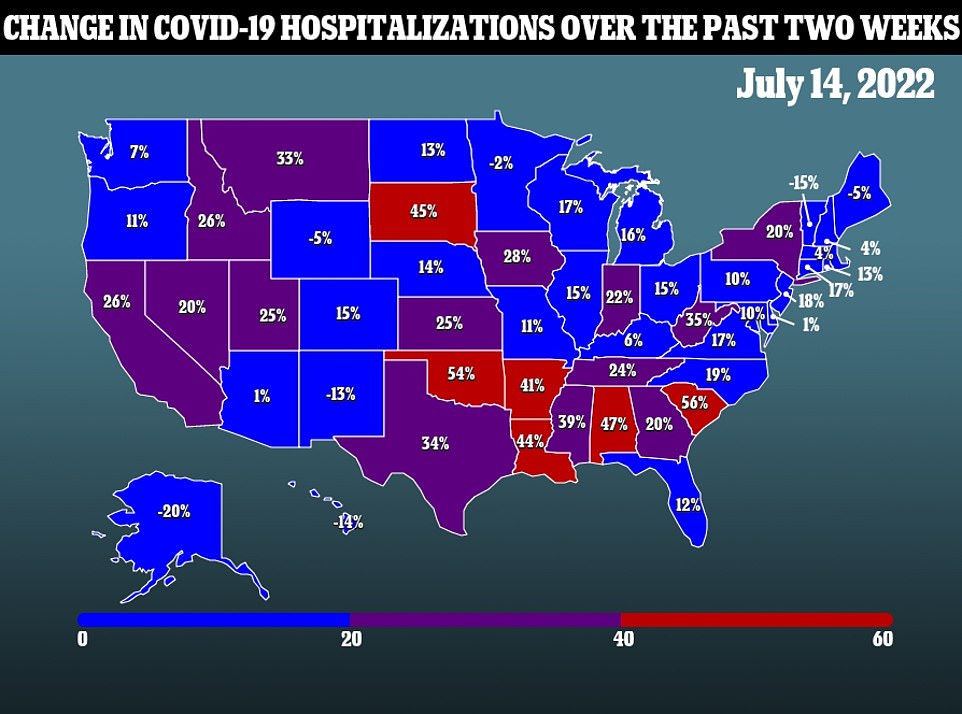 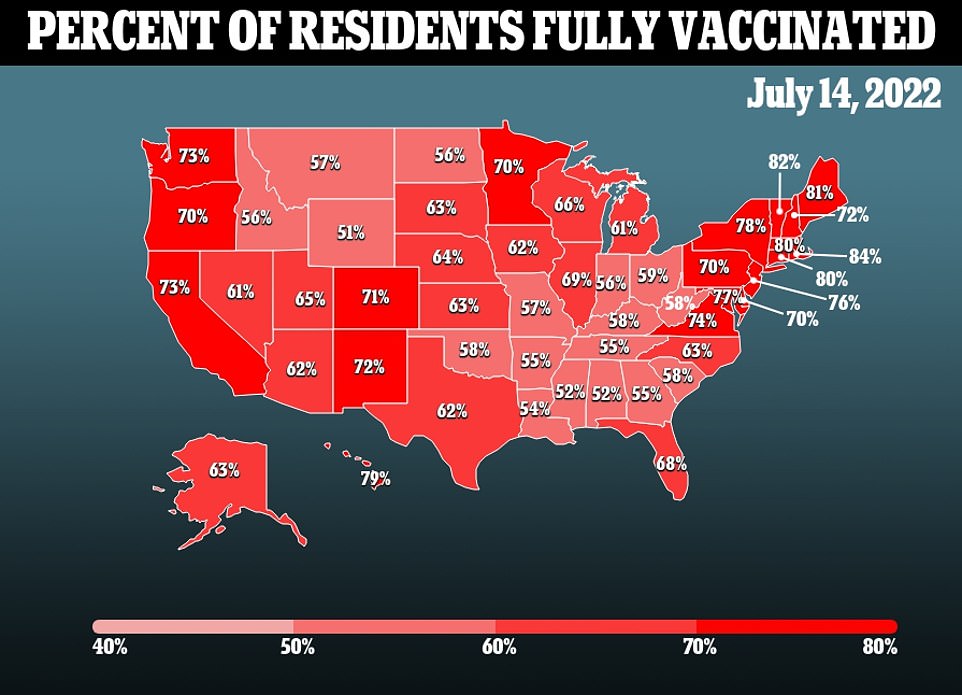 Fauci pointed to the New York area as being a particular hotspot for the virus and even the first area to experience the next wave of the virus – as it often has been throughout the pandemic.

Cases in the Empire state have increased 26 percent over the past two weeks, according to most recently available data.

In New York City, daily infections have jumped 28 percent, though hospitalization and death figures remain limited because of the city’s large vaccine uptake.

Dr Jay Varma, former public health advisor to Mayor Bill de Blasio, warned last week that BA.5 could the reason case figures in the nation’s largest city are starting to turn upwards – and that it could be a sign of another surge.

The U.S. often trends behind the UK during the pandemic, experiencing the same trends just a few weeks behind.

The European nation already suffered a BA.5-fueled Covid surge, and a MailOnline analysis finds that its surge could already be peaking.

Hospital admission blamed on the virus are increasing by around 20 percent per week, having the previously weekly rate increase of 40 percent a week, according to data from the National Health Service.