First we were told masks didn’t work. Then they did. And now, it seems, one isn’t enough.

The trend for double-masking – wearing two masks at the same time – began in America.

President Joe Biden and Vice President Kamala Harris have both been seen wearing two, while the country’s chief medical adviser, Dr Anthony Fauci, has promoted the trend for several months.

And last week, US health chiefs officially recommended wearing two masks, saying that it could reduce the potential spread of virus particles.

The guidance came after US health watchdogs, the Centers for Disease Control and Prevention (CDC), tested a number of different ways to wear masks.

While masks aren’t seen as a way to stop you catching Covid, they do effectively block the virus from being emitted from the mouth and nose of sufferers.

Research has shown that 60 per cent of people infected with the Covid-19 virus are asymptomatic – they don’t show any symptoms and are not ill.

British virus experts suggest double-masking should be adopted here too. Dr Julian Tang, a consultant virologist and honorary associate professor in the Department of Respiratory Sciences at the University of Leicester, believes the strategy would be an effective means at ‘plugging a dangerous hole’.

He said: ‘The greater number of masks you wear, the more chance you’ll have of blocking virus particles from spreading.’ 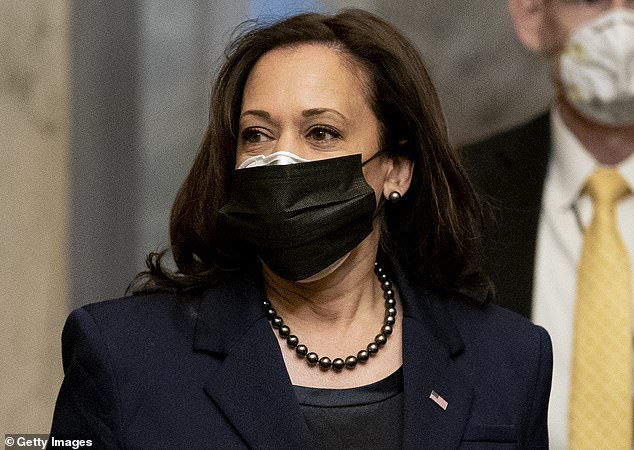 Doubling down: Vice President Kamala Harris wearing two masks while arriving at the US Capitol on December 11 last year in Washington, DC

Official UK guidance on masks states they should fit securely against the face to cover the mouth and nose. It also recommends that masks be made with at least two layers of fabric.

Surgical-grade masks are typically made with a triple layer, but many hand-made masks bought online are just a single layer.

Along with looking at double-masking, the CDC also tested tightening the mask strap behind the ears as well as tucking it in at the sides.

This was found to reduce the release of Covid-sized particles by 83 per cent, and the authors of the study said their experiments ‘highlight the importance of good fit to maximise overall mask performance’.

Whether the Government will change its guidance, however, is a different matter, said Dr Tang. ‘We’ve consistently been slow to adapt to new Covid evidence,’ he added. 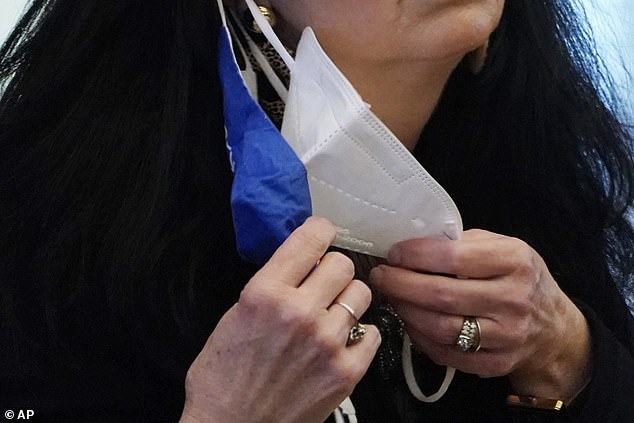 A state legislator adjusts her face masks while asking a question at the Capitol. Official UK guidance recommends that masks be made with at least two layers of fabric (file photo)

‘Wearing just one mask in a shop wasn’t mandatory until several months into the pandemic. I think it’s unlikely they’ll react to this.’

By contrast, 92 per cent of Americans say they wear a face mask when they leave the house.

Professor Benjamin Voyer, a behavioural scientist at the London School of Economics, said: ‘Britain was slow to take up mask-wearing, partly due to initial confusion over the benefits, partly because of conflicting messaging from the Government over when and where to wear them.

‘Another change to the recommendations could lead to even more confusion and less adoption in general.’