American diplomats who served in Cuba have been diagnosed with mild traumatic brain injury following mysterious, unexplained attacks on their health.

In addition to mild TBI, which is commonly referred to as a concussion, permanent hearing loss has been diagnosed among the ten diplomats as well.

The union that represents the US diplomats did not say how many of the ten diplomats who have spoken to the American Foreign Service Association had been given either diagnosis, but said other symptoms had included brain swelling, severe headaches, loss of balance and ‘cognitive disruption.’

The US Embassy in Havana, Cuba. The US diplomats working there have been diagnosed with mild traumatic brain injury

The union said that it ‘strongly encourages the Department of State and the US Government to do everything possible to provide appropriate care for those affected, and to work to ensure that these incidents cease and are not repeated.’

The late 2016 and early 2017 events leading up to the mysterious diagnosis has remained an elusive mystery.

US investigators continue looking for a device or other possible cause for what the State Department has described as attacks on diplomats’ health.

But early indications from US officials has pointed to a possible covert sonic device, although investigators have not said such a device has been found.

The State Department has said it can’t conclude who was responsible for the attacks. 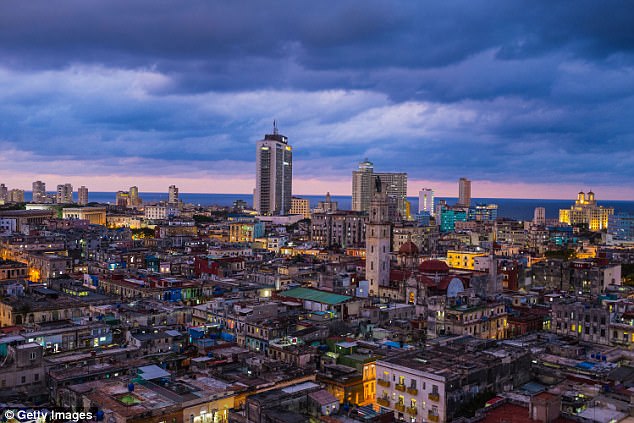 Havana, Cuba pictured above. The events leading up to the mysterious diagnosis has remained an elusive mystery to investigators

The hearing-related complaints were initially reported but the mild TBI diagnosis confirmed that the attacks caused more serious damage.

TBI typically results from a bump, jolt or other external force that disrupts normal brain functioning, according to the US Centers for Disease Control and Prevention.

Short- and long-term effects can include changes to memory and reasoning, sight and balance, language abilities and emotions.

Not all traumatic brain injuries are the same. Doctors evaluate patients using various clinical metrics such as the Glasgow Coma Scale, in which a numerical score is used to classify TBIs as mild, moderate or severe.

The State Department has said at least 16 Americans associated with the US Embassy in Havana suffered symptoms from attacks.

But the US has declined to describe their symptoms or current conditions, other than to say the ‘incidents’ that affected them are no longer occurring.