Trump won the batches of some 140,000 additional ballots from Maricopa County counted Wednesday and early Thursday by a roughly 57-40 margin, nearly exactly the margin he needs in all the state’s outstanding ballots to win.

Media outlets including the Associated Press have already projected Biden as the winner in Arizona, predicting that his current lead is insurmountable — but the latest numbers gave Trump’s boosters hope.

Arizona’s Secretary of State told Good Morning America on Thursday that it could take until Friday for all of the votes to be counted.

Maricopa County elections officials and observers watch as ballots are tallied on Wednesday. Trump won news batches of some 140,000 additional ballots from Maricopa County counted Wednesday and early Thursday by a roughly 57-40 margin 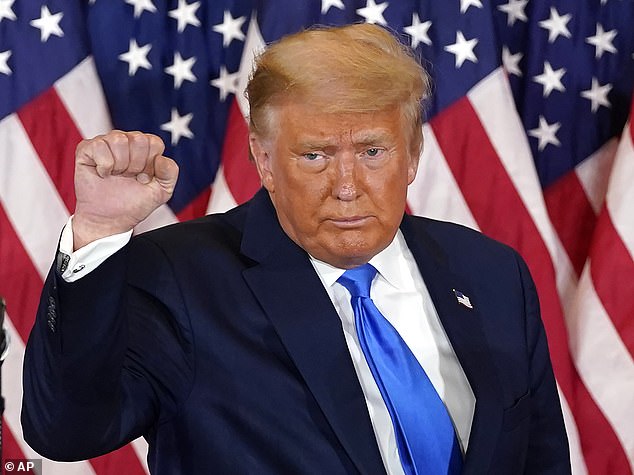 Media outlets including the Associated Press have already projected Biden as the winner in Arizona, but the latest numbers gave Trump’s boosters hope

Paul Bentz, a Republican pollster with the consulting firm HighGround, told the Arizona Republic that Trump would have to win 57.6 percent of the outstanding ballots in the state in order to overcome Biden’s lead.

Although that is nearly the exact margin by which Trump won the latest batch of absentee ballots, the Republican would have to replicate that performance across the state, including areas that tilt more Democrat.

‘He can’t afford really to trip up once, unless the next day suddenly he surges way back,’ Bentz said. ‘It’s a good first day [after the election]. The question is: Can he keep up this pace?’

Bentz said Wednesday was the best the Trump campaign could have hoped for after being down by so much on Tuesday night, and that the president’s campaign still ‘has a shot.’

If Trump were to convert Arizona to his column, he could still lose in one of the following states and emerge victorious: Nevada, Georgia or North Carolina.

With Arizona for Biden, all three states are must-wins for Trump. In either scenario, Trump must win Pennsylvania to retain the White House.

Earlier on Wednesday, Trump supporters, some armed with rifles and handguns, gathered outside an election center in Arizona after unsubstantiated rumors that votes for the Republican president were deliberately not being counted.

Chanting ‘Stop the steal!,’ and ‘Count my vote,’ the protesters stood in front of the Maricopa County Elections Department in Phoenix.

A victory for Biden in Arizona would give the Democrat 11 electoral votes, a major boost in his bid to win the White House, while severely narrowing Trump’s path to re-election, in a state the Republican won in 2016.

On Election night Fox News and the Associated Press called Arizona for Biden, even though only just over 70 percent of the vote had been counted, a move that infuriated Trump and his aides.

Some of the roughly 200 protesters, who were faced by a line of armed county sheriffs, chanted ‘Shame on Fox!.’ Some said they came out after a tweet from Mike Cernovich, a right-wing activist.

Chris Michael, 40, from Gilbert, Arizona, said he came to make sure all votes are counted. He said he wants assurances that the counting was done ‘ethically and legally.’ 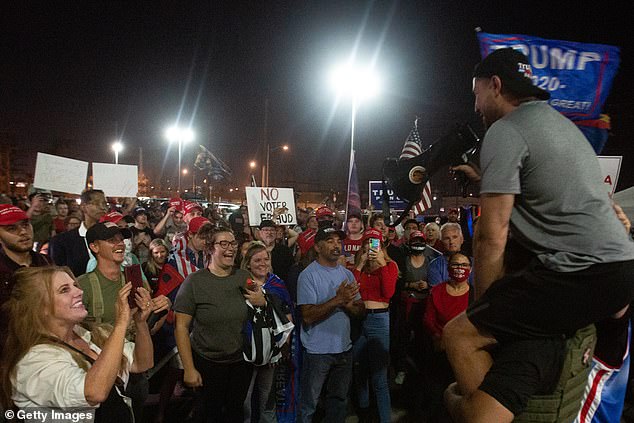 Earlier on Wednesday, Trump supporters, some armed with rifles and handguns, gathered outside an election center in Arizona after unsubstantiated rumors that votes for the Republican president were deliberately not being counted 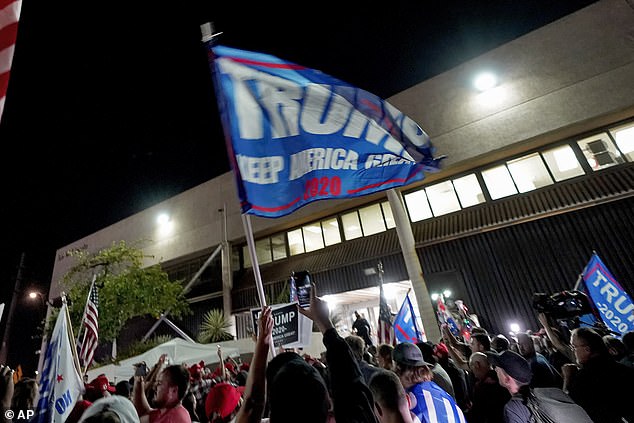 Supporters of President Donald Trump rally outside the Maricopa County Recorder’s Office Wednesday. They were demanding

Rumors spread on Facebook Tuesday night that some Maricopa votes were not being counted because voters used Sharpie pens to mark their ballots. Local election officials insisted that was not true.

With the count still under way in several key states, Trump has accused the Democrats of trying to steal the election and filed lawsuits in several states related to vote-counting.

A similar scene played out on Wednesday afternoon in downtown Detroit, where city election officials blocked about

30 people, mostly Republicans, from entering a vote-counting hall amid unfounded claims that the vote count was fraudulent.

Trump has filed a lawsuit in Michigan to stop vote-counting that the secretary of state called ‘frivolous.’