US election 2020: Voting underway as polling places open across US

Americans have started casting their election day ballots in support of either Donald Trump or Joe Biden as polling places opened across the United States.

Long lines started forming before dawn on Tuesday with polls opening in some eastern states as early as 6am EST.

Record numbers of Americans – nearly 100 million – have already cast their ballots early due to concerns over Postal Service delays and worries about COVID-10 spreading through crowded polling places.

Now it falls to election day voters to finish the job, ending a campaign that was upended by the pandemic and defined by tensions over who could best address it.

Biden has had a strong and consistent lead in national polls but Trump is close in enough swing states to possibly piece together the 270 state-by-state Electoral College votes needed to hold on to the presidency.

The most closely watched results will start to trickle in after 7pm EST when polls close in states such as Georgia.

Definitive national results, however, could take days if the contest is tight.

LOUISVILLE, KENTUCKY: Voters check in with election officials before receiving their ballots at Ballard High School 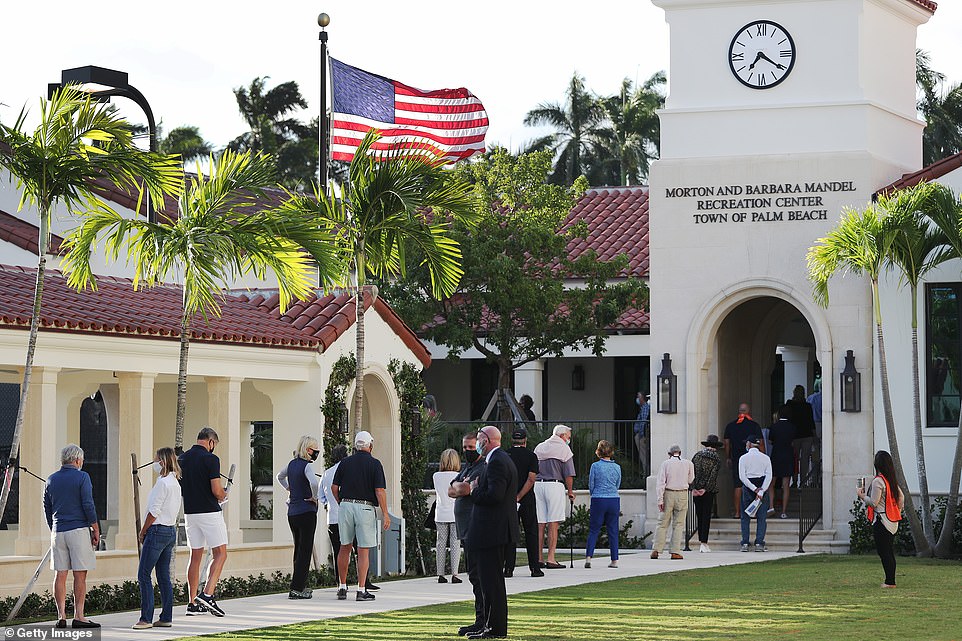 PALM BEACH, FLORIDA: People stand in line to vote at the Morton and Barbara Mandel Recreation Center first thing Tuesday morning on the last day to cast their vote for either Trump or Biden 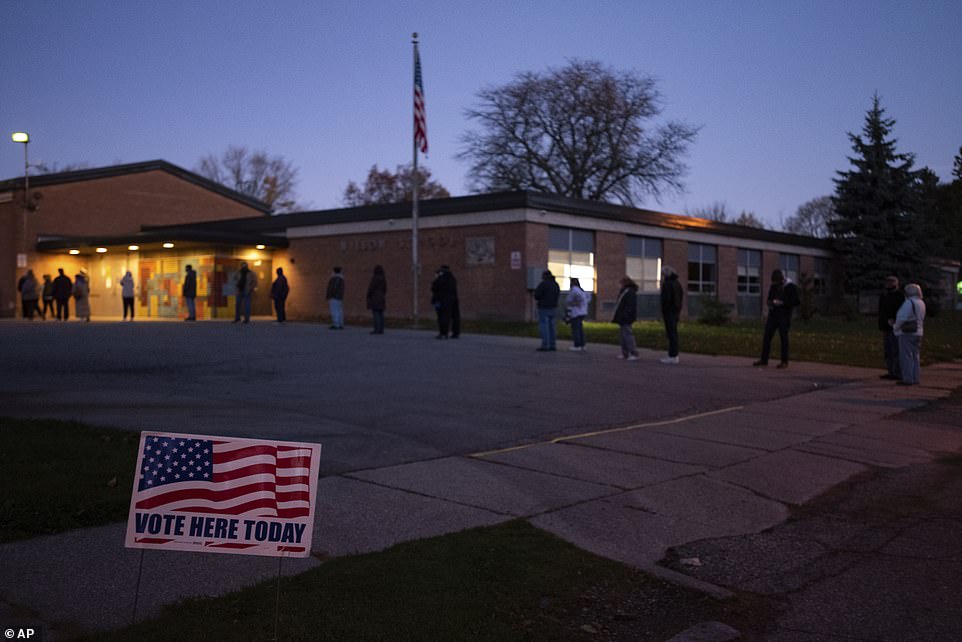 LANSING, MICHIGAN: Voters in Lansing lined up outside Willow School before sunrise on election day 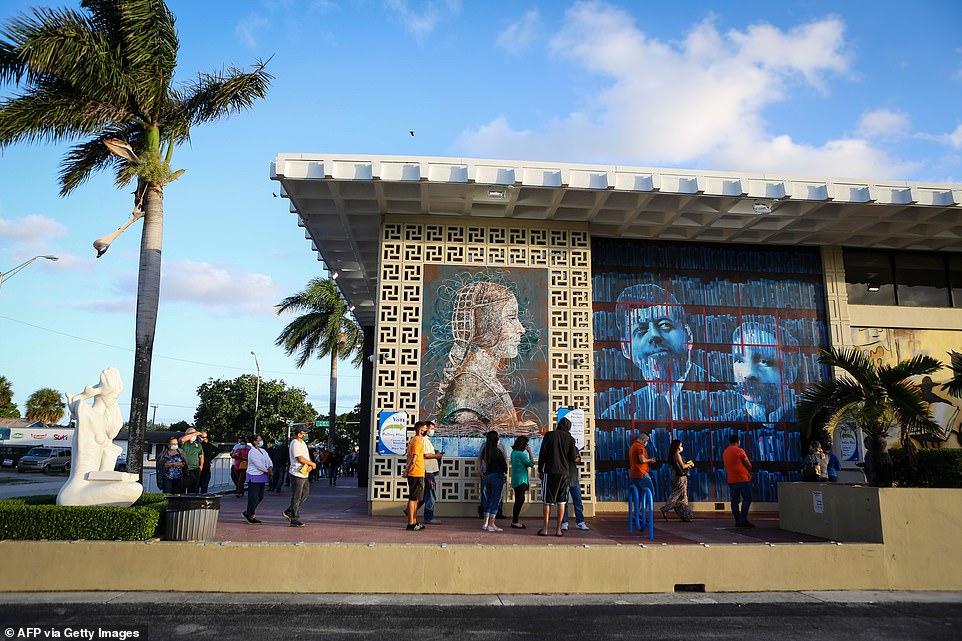 Results in Florida, where mail-in ballots can be counted before election day, are expected to begin to come in relatively quickly on Tuesday night. But Pennsylvania, Michigan and Wisconsin will not begin counting the vast majority of mail ballots until election day, raising the possibility of a prolonged vote count that could stretch for several days.

More than 99 million Americans have already voted early either in person or by mail, motivated not only by concerns about waiting in line on election day amid the pandemic but also by extraordinary levels of enthusiasm after such a polarizing campaign.

The record-shattering total is already more than 70 percent of the total 2016 vote, according to the US Elections Project at the University of Florida. Experts predict the vote could reach 160 million, far exceeding the 138 million ballots cast four years ago.

Fighting to the end for every vote, Biden was headed to Philadelphia and his native Scranton on Tuesday as part of a closing get-out-the-vote effort before awaiting election results in his hometown of Wilmington, Delaware.

Biden and his wife, Jill, started the day with a stop at St. Joseph’s on the Brandywine in Wilmington, Delaware, with two of his grandchildren in tow. After a brief church visit, the four walked to his late son Beau Biden’s grave, in the church cemetery.

Trump made a morning appearance on Fox & Friends where he predicted he will win by a larger electoral margin than he did in 2016. He also planned to visit his campaign headquarters in Virginia. He invited hundreds of supporters to an election night party in the East Room of the White House. 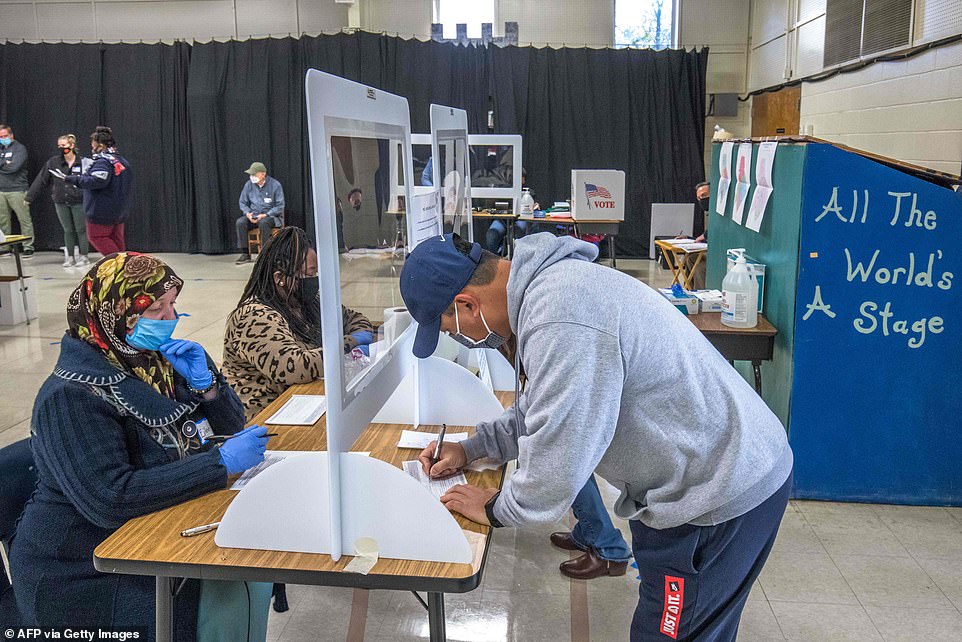 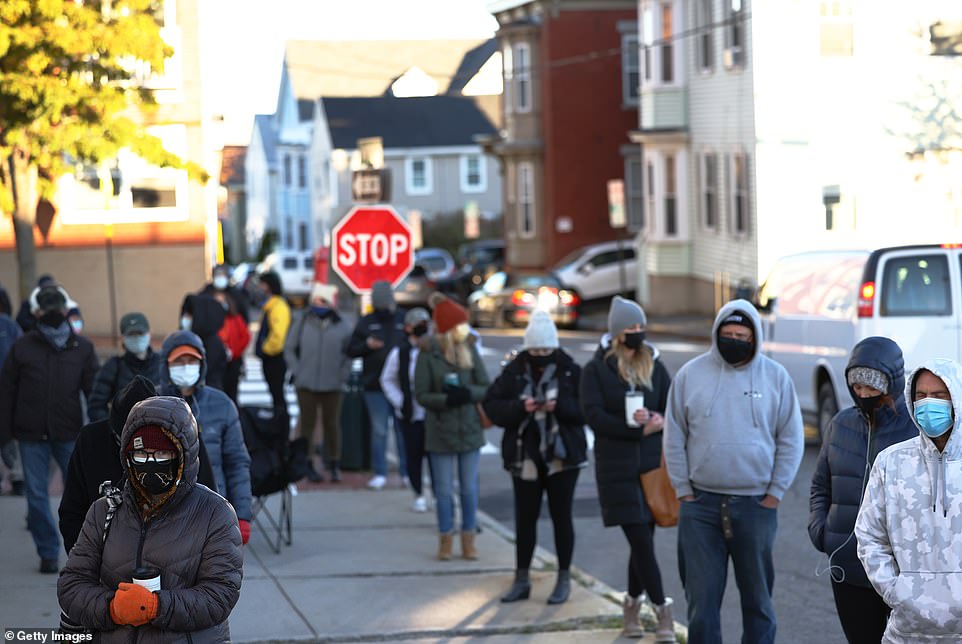 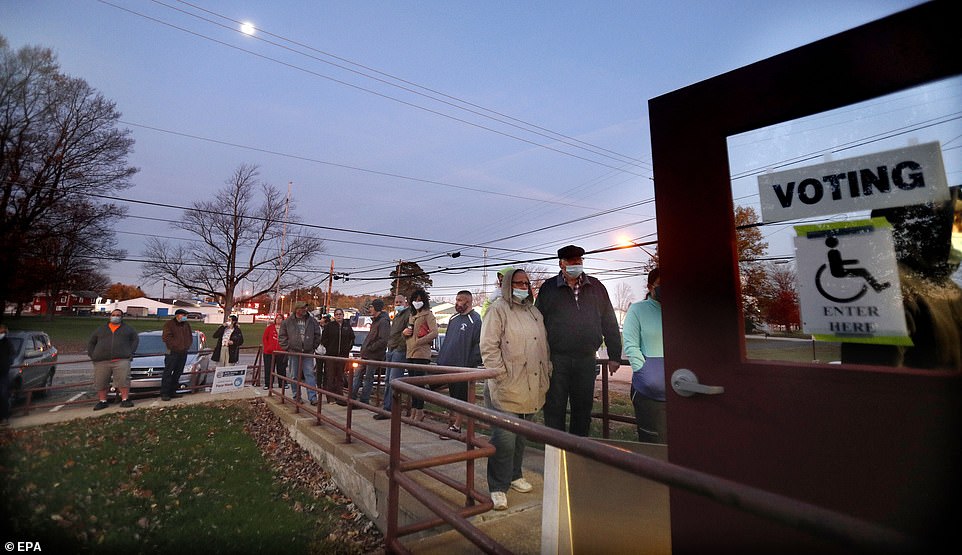 EDINGBURG, OHIO: Voters wait in line before dawn at a polling location at the Edinburg Town Hall in Edinburg 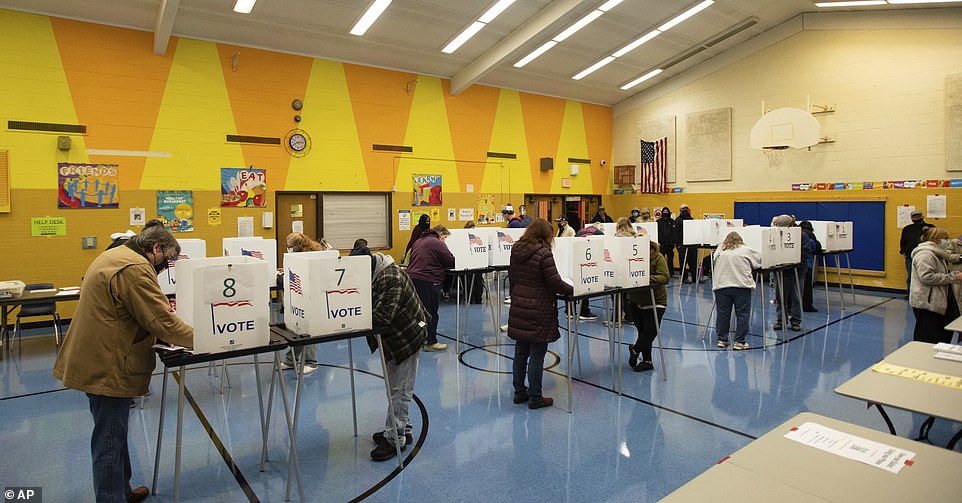 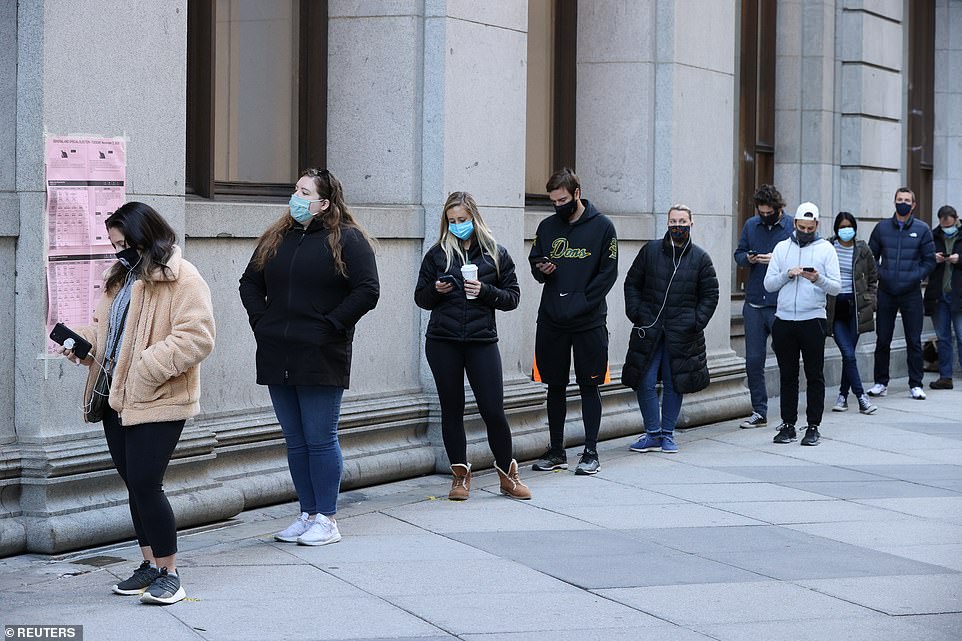 PHILADELPHIA, PENNSYLVANIA: Voters wearing masks lined up down the block at a polling station in the city 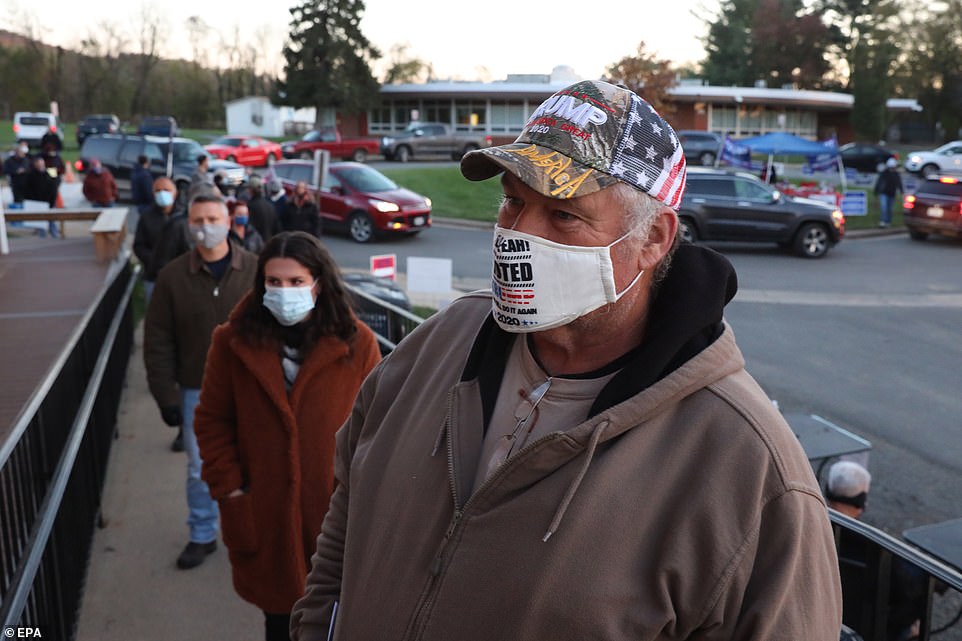 HILLSBORO, VIRGINIA: Voters wait in line at a polling location at the Old Stone School in Hillsboro 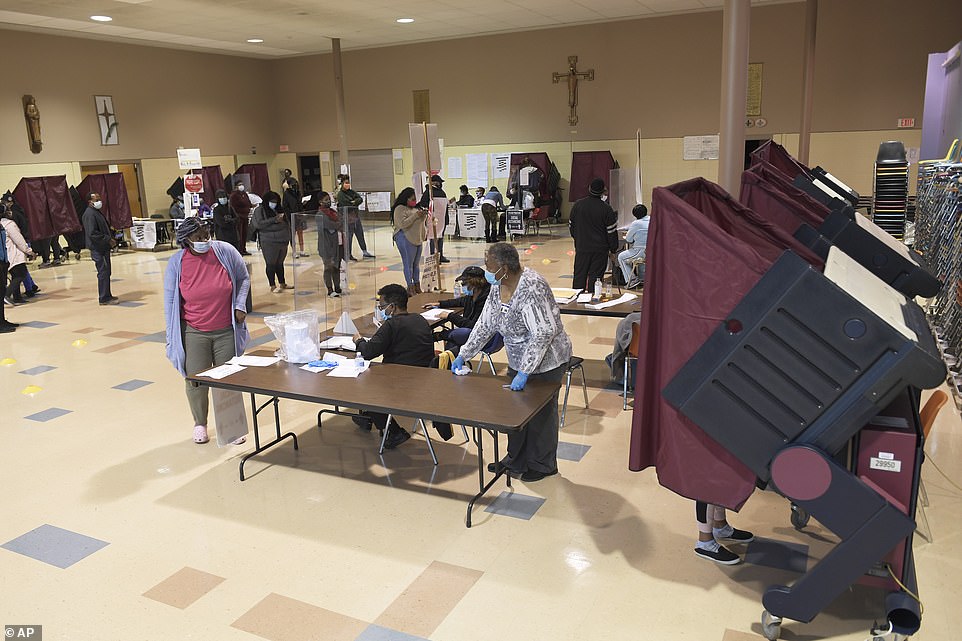 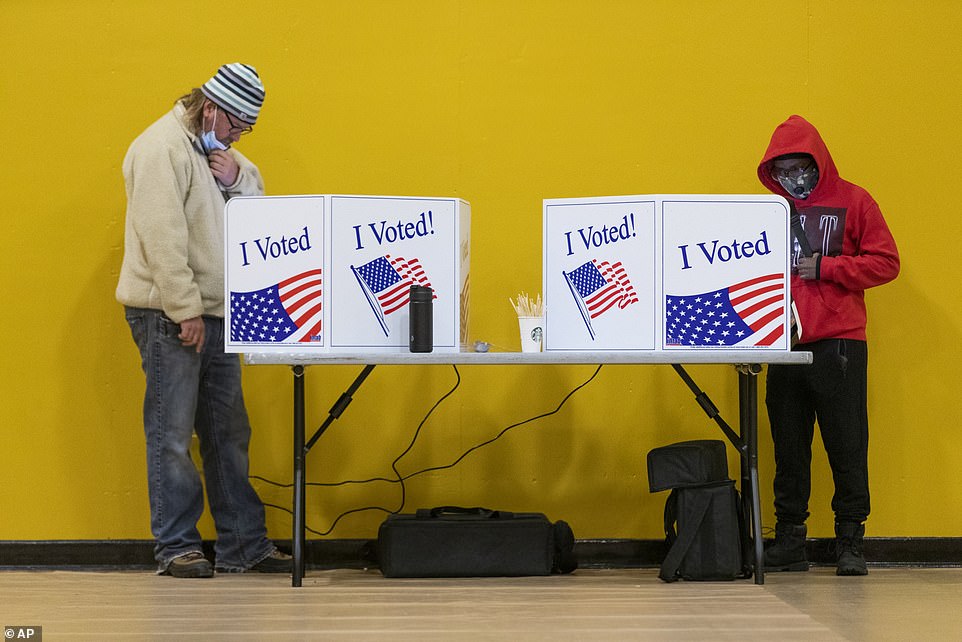 COLUMBIA, SOUTH CAROLINA: Polls opened in some Eastern states at 6am EST. The most closely watched results will start to trickle in after 7pm EST when polls close in states such as Georgia