A new poll shows that President Trump has a seven point lead over rival Joe Biden in swing state Iowa.

The latest Des Moines Register/Mediacom Iowa Poll, released Saturday, shows that Trump is ahead of Biden, 48 per cent to 41 per cent, in the state, with 2020 Election Day just days away. 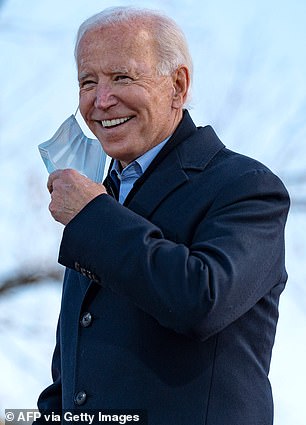 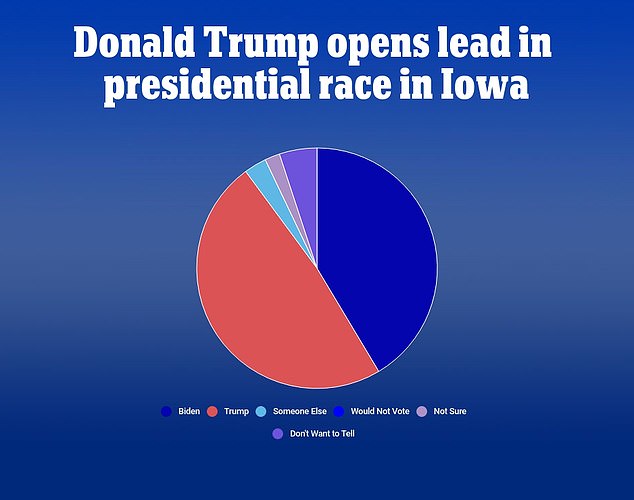 In September, the Iowa Poll revealed that Trump and Biden were tied at 47 per cent among voters in the state.

The latest Iowa Poll surveyed 814 likely Iowa voters and was conducted Selzer & Co. of Des Moines between October 26 to 29. The margin of error is plus or minus 3.4 percentage points.

The new Iowa Poll results come on the heels of Friday’s Fox News poll which revealed that Trump is closing the gap with Biden and is now only eight points behind the former vice president among national voters.

The Iowa Poll indicated that there’s still a gender gap between voters, with more men in the state being likely to throw their support behind Trump, while women support Biden.

Iowa independents – who supported Trump during the 2016 election – also told pollsters that they planned on supporting Trump for this election. They favor Trump 49 per cent to Biden’s 35 per cent.

Back during September’s Iowa Poll, independents had said they were behind Biden at 50 per cent to Trump’s 38 per cent. 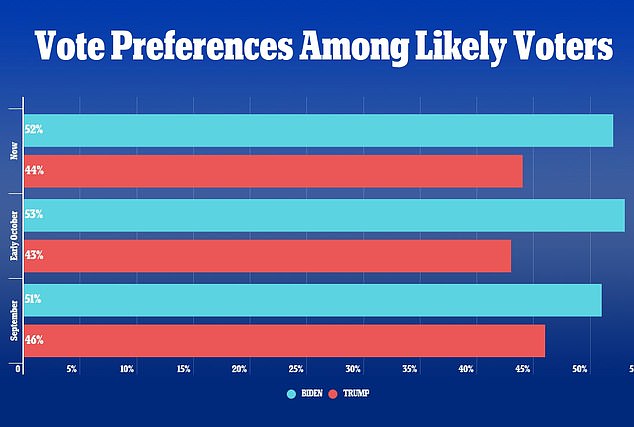 A Friday Fox News national poll showed Biden ahead of Trump by eight points, down from 10 points three weeks prior. Biden now leads by 52-44 per cent 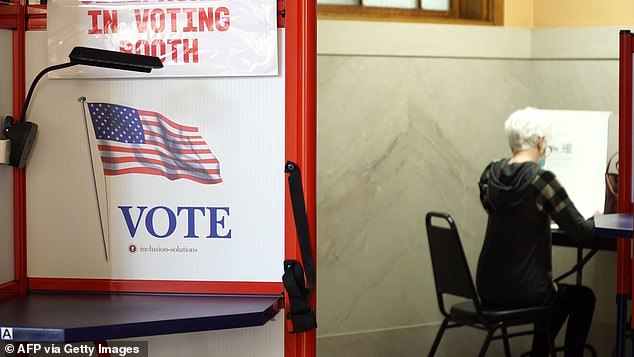 Biden was the preferred candidate among those in the state who had voted early or by mail-in ballot, while Trump was the favorite for those voting in person. An early voting station in Newton, Iowa, is pictured on October 15 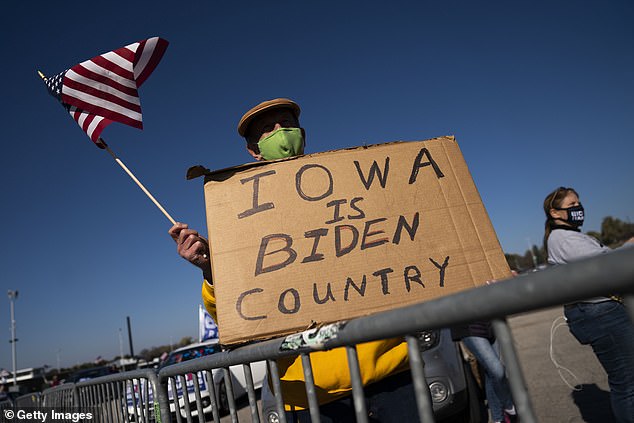 Biden and Trump were neck-in-neck with 47 per cent of respondents saying they would vote for the candidates in September. A Biden supporter is show on October 30 in Des Moines 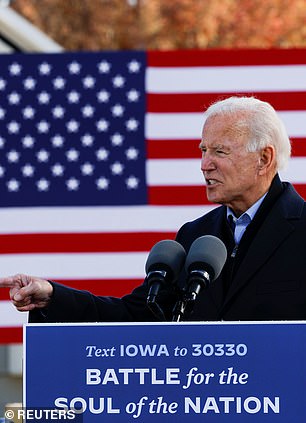 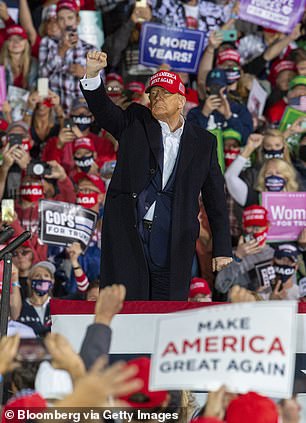 Biden made a campaign stop in Des Moines Friday (pictured left), while Trump was there on October 14 (pictured right). Trump will return to Iowa on Sunday

‘The president is holding demographic groups that he won in Iowa four years ago, and that would give someone a certain level of comfort with their standing,’ J. Ann Selzer, president of Selzer & Co., told the Des Moines Register.

‘There’s a consistent story in 2020 to what happened in 2016,’ Selzer added, noting that ‘Neither candidate hits 50%, so there’s still some play here.’

In an attempt to swing the state, Biden held a drive-in rally in Des Moines on Friday. Trump is scheduled to hold a rally in Dubuque, Iowa, on Sunday.

The Iowa Poll showed that 94 per cent of voters have already made up their minds about who they intend to cast their ballots for. Only four per cent of those polled said that they could be persuaded to go either way, while two per cent said they didn’t have a first choice for president.

Many polled have already cast their ballots, though, as 51 per cent of likely voters said they voted via early or mail-in voting.

Among those who have already voted, 55 per cent have voted for Biden, compared to 32 per cent who voted for Trump.

But, among those who plan to vote on Election Day itself, Trump leads Biden, 64 per cent to 28 per cent.

Friday’s Fox News national poll showed that Biden is ahead of Trump by a 52-44 per cent margin, with two per cent of likely voters backing a third-party candidate and two per cent being undecided.

Three weeks ago, in early October, the pollster said that Biden had a 53-43 per cent margin.

The Fox News poll was conducted between October 27 to 29 by Beacon Research and Shaw & Company. The poll results were based on interviews with 1,318 randomly chosen registered voters nationwide and included results among 1,246 likely voters. It’s margin of error was plus or minus 2.5 percentage points for both registered and likely voters.