US firm takes 12,000 employees on a six-day trip to Switzerland to reward them

We all want our boss to give us a pat on the back when we stay late in the office.

And this U.S. cosmetic company has gone above and beyond to reward its staff who hit their sales target.

Jeunesse Global, a Florida-based firm, is taking its 12,000 employees in China on a dream holiday to Switzerland as a ‘thank you’ to their hard work.

The first group of 4,000 Jeunesse sales staff arrived in Switzerland last week for their holiday 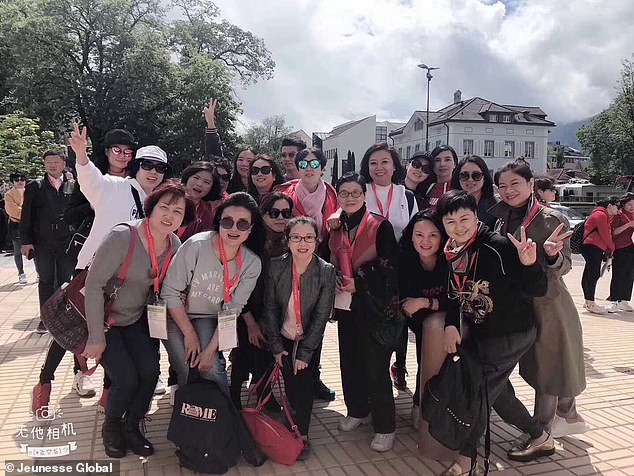 Two more groups will follow, bringing the total number of visitors to Switzerland to 12,000

The massive tour group will arrive in Europe in three batches and visit some of the most popular scenic spots in Switzerland during the six-day, five-night journey.

The first group arrived at Zurich last Thursday and have so far visited historic town Schaffhausen, ski resort Engelberg, the Rhine Falls and the Aare Gorge in the central Alps – among other places – according to Swiss newspaper Neue Zürcher Zeitung.

Most tourists in the group will leave China and arrive in Zurich, the largest city in Switzerland with a population of over 380,500. 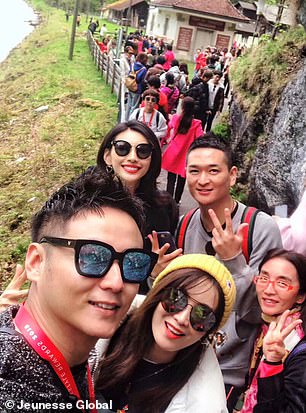 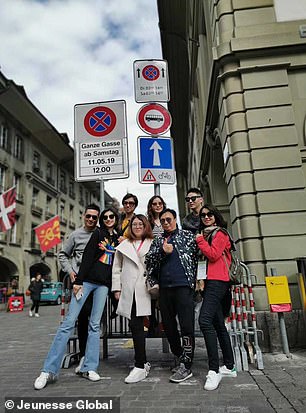 The company, which has a large following in China, announced to its Chinese staff last year that they would be awarded a trip to Switzerland if they could reach their sales targets 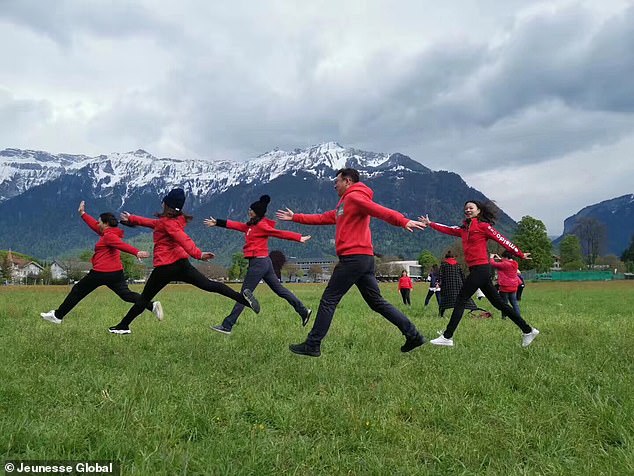 One employee from the company’s China branch told MailOnline that she was very excited about the trip.

The employee, who calls herself Dannie Li, said she would arrive in Switzerland on May 16 with the second group and leave on May 22.

It announced to its staff in the Far East last autumn that they would be awarded an all-inclusive trip to Switzerland as long as they could reach their sales targets.

The somewhat controversial multi-level marketing company has a large following in China with thousands of sales staff who refer to themselves as ‘members’.

The company was founded by an American couple: a self-made entrepreneur Randy Ray who claimed he was so poor as a child he couldn’t afford shoes, as well as his wife Wendy Lewis.

Apparently, this is not the first mass group tour the company has organised. 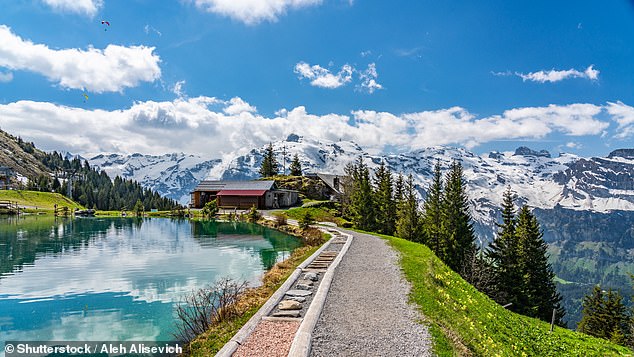 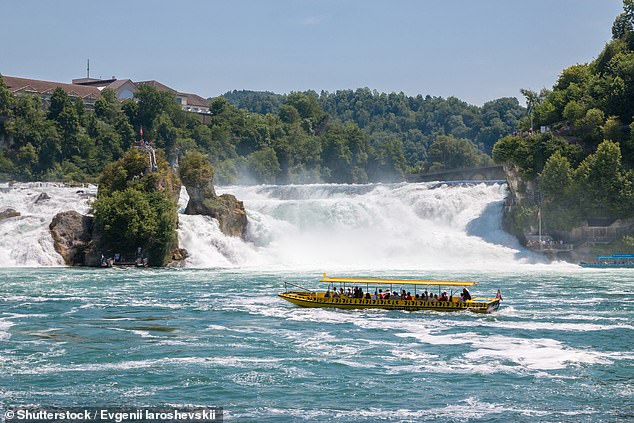 Ms Li said the company took its sales staff in North American to Rome last month and she was on the company’s incentive trip last year to Australia.

She gushed: ‘6,500 of us were divided into groups and climbed the Sydney Harbour Bridge. We also had a 3,000-strong picnic in the Sydney Olympic Park.

Ms Li explained that the company arranged different groups to visit different attractions in turn in Sydney, therefore the whole trip was in good order.

And this time in Switzerland, the 12,000 sales staff are divided into three 4,000-strong groups and no more than 1,000 people will show up at the same attraction at the same time, Swiss media said. 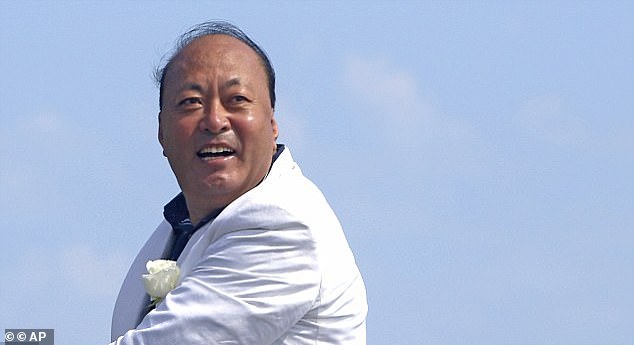 In 2015, Chinese billionaire Li Jinyuan took 6,400 of his staff on a four-day holiday to France 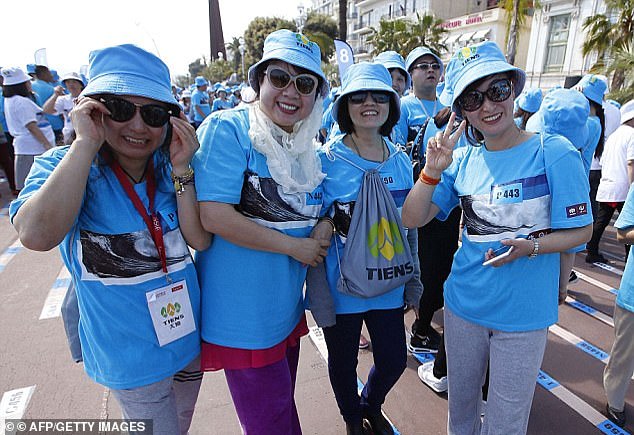 Li, boss of Tiens Group Company, booked up 140 hotels in Paris where the group visited the Louvre and various cultural sites in one of the world’s most famous and revered cities 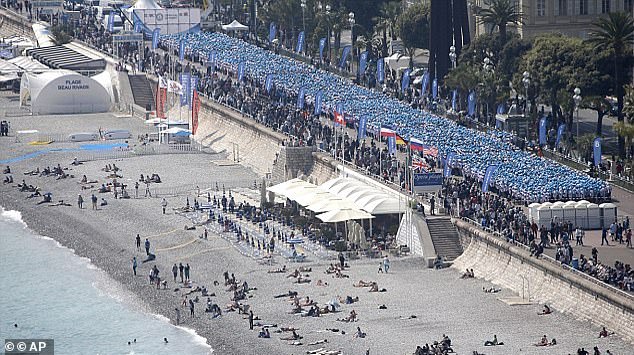 However, some experts in Switzerland have expressed their concerns on the impact from tour groups this scale on the local life.

Jürg Stettler, a professor from Lucerne University, told Neue Zürcher Zeitung that such large number of tourists would likely cause bottlenecks and jams in and around the attractions because all visitors would want to do, see and eat the same thing at the most popular spots.

But a spokesperson from Switzerland Tourism claimed that handling such large groups was in fact ‘business as usual’ for the country’s tourism industry.

The spokesperson told MailOnline: ‘One has to bear in mind that Swiss tourism providers, especially hotels and mountain railways, are absolutely used to handle bigger groups of guests.’

The spokesperson added: ‘Switzerland is a dream destination in Asia in general. Asian and Chinese tourists are very fond of the Swiss nature, the mountains and especially the fresh air and green landscapes.’

Enormous Chinese tour groups have descended in Europe in the past.

In 2015, a Chinese billionaire made headlines around the world after taking 6,400 of his staff on a four-day holiday to France.

Tiens Group Company Chairman Li Jinyuan booked up 140 hotels in Paris where the group visited the Louvre and various cultural sites in one of the world’s most famous and revered cities.

The huge group of tourists then made their way to the glamorous Cote D’Azur, where Li Jinyuan booked 4,760 rooms in 79 four-and five-star hotels in Cannes and Monaco.

It took 147 buses to take the tourists from their hotels to the Promenade des Anglais in Nice, where Guinness World Record officials where on hand to validate the world’s biggest ever human chain.