How’s that for an awkward breakup? US golfer Will Zalatoris splits with his long-time caddie in the MIDDLE of a tournament – before admitting it was the ‘toughest decision of his career’ to part ways with his ‘brother for life’

Will Zalatoris’ trip to North Carolina hasn’t gone as expected.

The same rings truer for his former caddie Ryan Goble, who was sensationally removed of his duties mid-tournament.

Goble and Zalatoris have been in partnership for several years while enhancing their friendship off the course too.

And while issues lingered on the course, this too seems to have played a role in Goble’s departure, with the breakdown not only affecting matters of the ball and club, but their external relationship as well.

Will Zalatoris and his caddie, Ryan Goble, have parted ways after several years of success

‘Ryan’s a brother for life,’ Zalatoris said following his third round of the Wyndham Championship in Greensboro, NC.

‘We’ve kind of had a rough month together and it was starting to affect our relationship. I know guys say that when they split, but it really was.

‘We would love to have dinner together and hang out. What was going on on the course was starting bleed off the course and that’s not what you want.

‘He’s an incredible friend, I love him to death, and I told him I had to do what’s best for me. 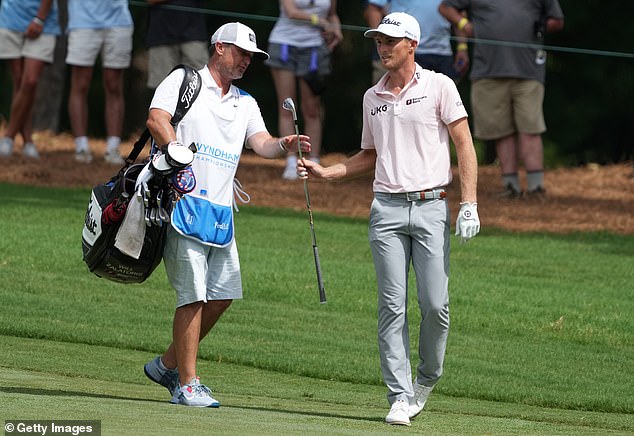 ‘It was the toughest decision I’ve had to make in my golf career.’

Despite the rocky partnership, Zalatoris has enjoyed a successful run on the tour, despite failing to win a major.

The Texas native finished has finished runner-up at three majors, losing out at the PGA Championship in a playoff to Justin Thomas, missing out by one stroke at the US Open and falling to Hideki Matsuyama at The Masters in 2021.

There may still hope for the pair yet — as caddie and golfer  — with Zalatoris refusing to rule anything out.

‘Like I said, nothing’s permanent and we’ll kind of see how everything goes from here.’