The United States has placed a British jihadist on its global terrorism list, saying he has replaced ‘Jihadi John’ as an executioner for ISIS.

Siddhartha Dhar, also known as Abu Rumaysah, left the UK to join ISIS in Syria, where he replaced Londoner Mohammed Emwazi as the group’s executioner, the State Department said.

Dhar, a former bouncy castle salesman from Walthamstow, London, was placed on the list along with Abdelatif Gaini, a Belgian-Moroccan citizen who is also believed to be fighting in the Middle East.

The designation allows the government to impose sanctions as well as freeze assets and property.

The United States has placed Siddhartha Dhar (pictured) on its global terrorism list, saying he has replaced ‘Jihadi John’ as an executioner for ISIS

In a statement on Tuesday, the State Department said Dhar – who has been nicknamed ‘Jihadi Sid’ – was a leading member of the now-defunct terrorist organisation Al-Muhajiroun.

‘He is considered to have replaced ISIS executioner Mohammed Emwazi, also known as ‘Jihadi John’,’ a spokesman for the State Department said.

‘Dhar is believed to be the masked leader who appeared in a January 2016 ISIS video of the execution of several prisoners ISIS accused of spying for the UK.’

The statement adds that designating Dhar and Gaini global terrorists is a bid to notify the public that the pair ‘have committed or pose a significant risk of committing acts of terrorism.’ 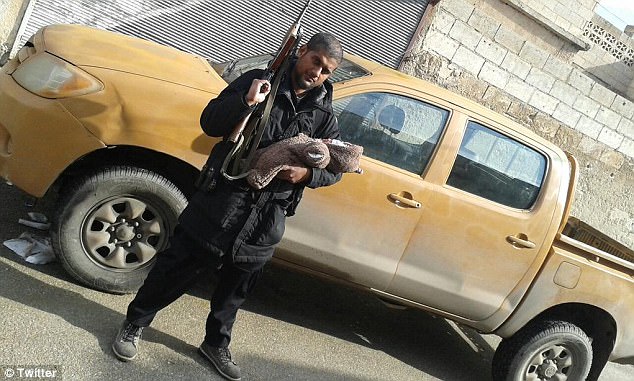 After fleeing the UK to join ISIS in Syria, Dhar posted this picture of himself holding his newborn son and an AK-47 rifle

Furthermore, the designation seeks to deny them ‘the resources they need to plan and carry out further terrorist attacks.

Dhar was arrested in September 2014 alongside Anjem Choudary on suspicion of belonging to the banned Al-Muhajiroun group.

Choudary was later jailed for five years and six month for urging Muslims to support ISIS. 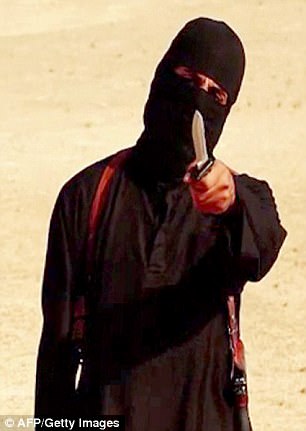 But Dhar left the UK with his family in September 2014, just hours after being released on bail while under investigation for terrorism offences.

Authorities had banned him from travelling and ordered him to hand over his passport.

But accompanied by his wife and children, he boarded a coach bound for Paris from London’s Victoria station.

He taunted police by announcing his arrival in Syria weeks later with a picture of himself holding his newborn son and an AK-47 rifle on Twitter.

‘What a shoddy security system Britain must have to allow me to breeze through Europe to [ISIS],’ he wrote alongside the image.

Dhar was born and raised in the UK in a Hindu family, but reportedly converted to Islam to marry his Muslim wife Aisha.

He took the name Saiful Islam, but was nicknamed Abu Rumaysah, according to the BBC.

Before he fled to Syria, Dhar was well-known among radical Islamist circles in London.

He was accused of calling for the implementation of Sharia law in the UK and burning poppies.