An al-Qaeda courier who spent his teenage years in Baltimore has become the first person to detail publicly his torture at the hands of the CIA.

Majid Khan, 41 appeared before a jury at Guantanamo Bay on Thursday where he spoke at length of his experiences following his arrest in Pakistan in March 2003.

His father, Ali, and a sister, both U.S. citizens, traveled to Cuba for the hearing and initially did not recognize him, having not seen him in person since he left the United States and joined Al Qaeda after the September 11 attacks.

As Khan described in graphic detail how he had been beaten, tortured, waterboarded to the point of near-drowning, shackled and force fed anally, his father wept.

Khan told the jury that he had been stripped naked and beaten, and spent long periods of time in chains, either shackled to a wall or to a beam on the ceiling with his arms above his head as part of the CIA’s ‘enhanced interrogation’ process.

CIA agents also allegedly pumped water into his rectum with a green garden hose when he refused to drink.

‘They connected one end to the faucet, put the other in my rectum and they turned on the water,’ Khan said.

Majid Khan, 41, is pictured in 2018. He was arrested in Pakistan in March 2003 and taken to Guantanamo Bay in 2006. In 2012 he pleaded guilty to multiple charges of supporting a terror organization 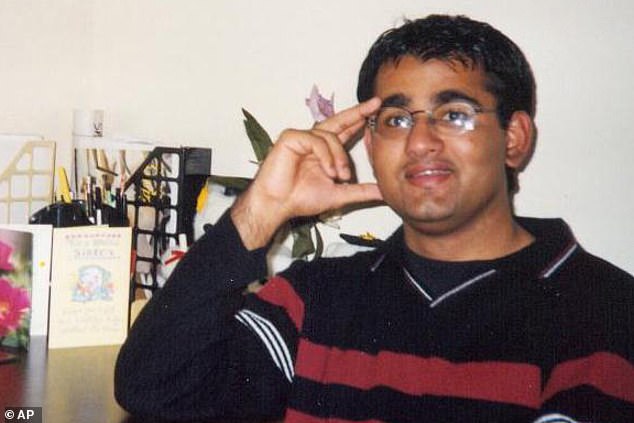 Khan is seen during his high school years, in the late 1990s. He has said he was a normal teenager, occasionally smoking weed and having several girlfriends 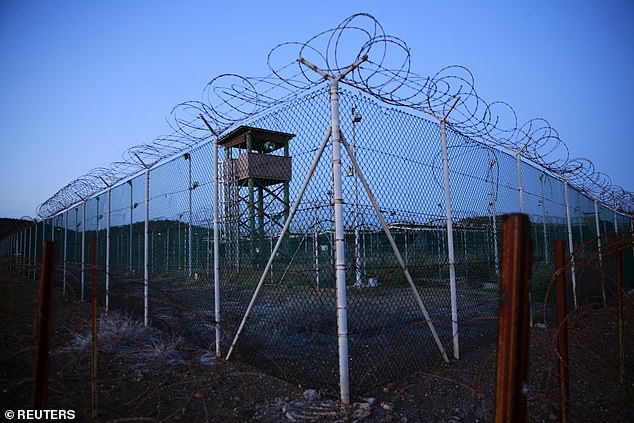 Khan appeared in court in Guantanamo Bay (pictured) on Thursday, and will be sentenced on Friday

Khan pleaded guilty in February 2012 and on Friday will be sentenced to between 25 and 40 years.

The sentencing is symbolic, however: Khan has been cooperating with prosecutors since immediately after his arrest, and agreed to testify against the architect of 9/11, Khalid Sheikh Mohammed, on condition that his sentence be reduced.

His actual sentence could end as early as February and no later than February 2025.

Khan pleaded guilty to plotting with Mohammed in 2002 to blow up gasoline tanks in the United States; agreeing to assassinate the Pakistani president; and delivering $50,000 that was used to finance the bombing of a Marriott hotel in Jakarta, Indonesia, in 2003, killing 11 people.

He has said he did not know what the money was going to be used for when he transported it.

Khan, born in Saudi Arabia and raised in Pakistan, moved to Baltimore when he was 16. 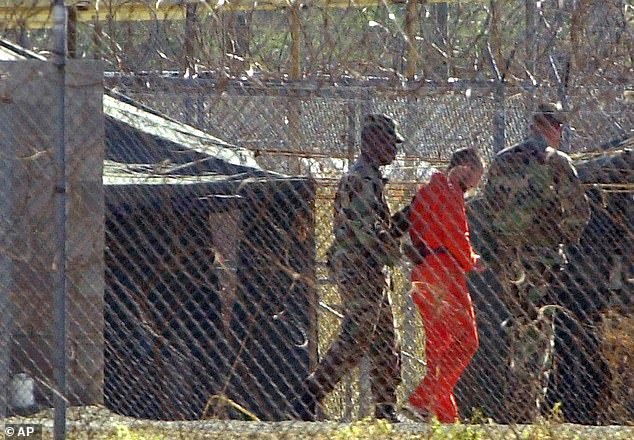 Prisoners in orange jumpsuits are seen in Guantanamo Bay in January 2002, in the notorious Camp X-Ray part of the base 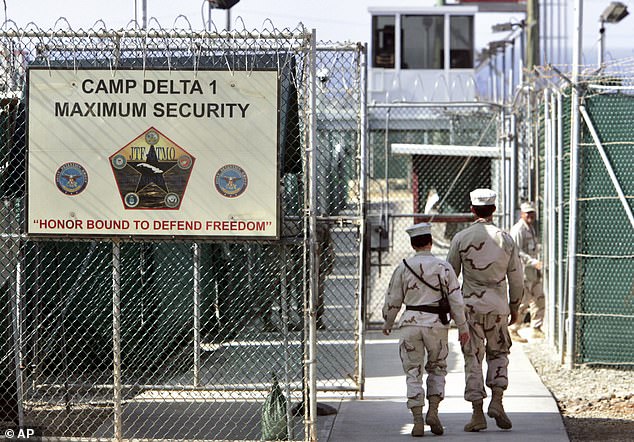 Khan has said that he does not know where he was tortured, as he was transported hooded multiple times 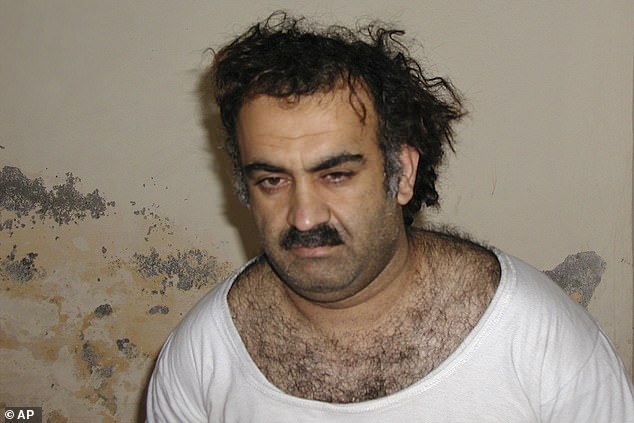 Khalid Sheikh Mohammed, perhaps the most famous of all Guantanamo Bay detainees, is seen in March 2003, shortly after his capture in Pakistan. Khan admitted to working with him

He graduated from a high school in suburban Baltimore and was working for a telecommunications contractor that managed the Pentagon phone system at the time of the September 11 attacks.

Khan said that the attacks served to radicalize him, and he was encouraged by relatives in Pakistan to support ‘jihad’, in particular during a 2002 trip, during which he and one of his sisters entered into an arranged marriage.

‘I was lost and vulnerable, and they went after me,’ he said, according to court reporting from The New York Times.

He told the court his relatives in Pakistan even showed him ‘propaganda videos’ about Guantanamo, in a bid to radicalize him further.

Khan was transferred to the base in 2006.

‘I went willingly to Al Qaeda,’ he said. 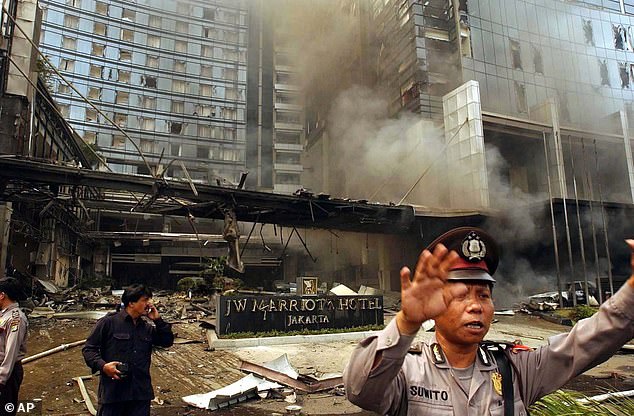 The Marriott hotel in Jakarta is seen after the August 2003 bombing, which was financed in part by the $50,000 Khan transported 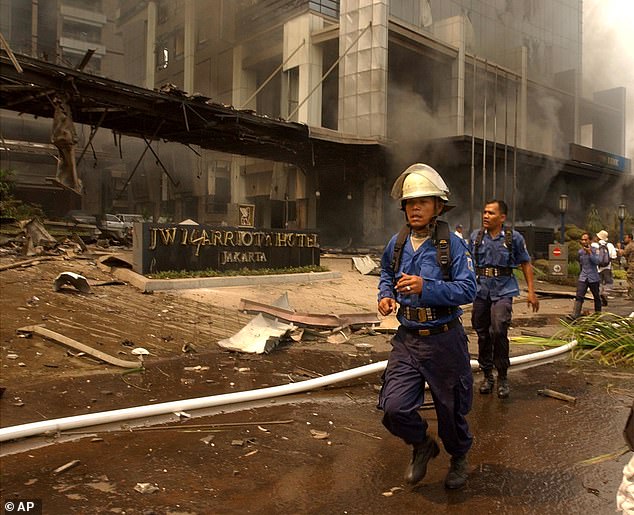 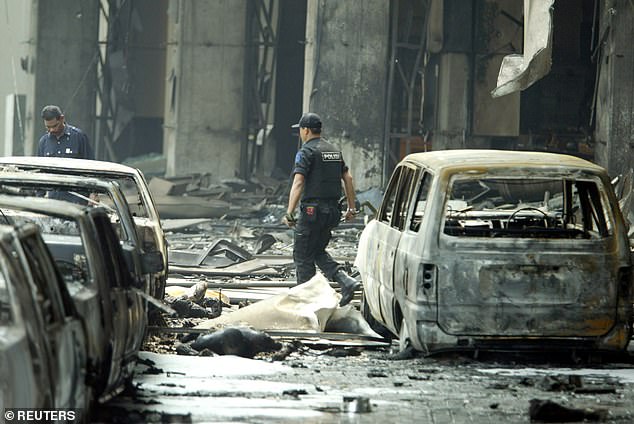 The locations of Khan’s torture were not disclosed.

In many cases, Khan himself did not know. He told the court on Thursday he was given an enema and then had diapers attached for long plane journeys, during which he was wearing a hood.

Khan said he was extensively tortured.

He was stripped naked and beaten, and spend long periods of time in chains, either shackled to a wall, crouching ‘like a dog’, or chained to a beam with his arms above his head.

Khan said after his agreement to cooperate and tell them everything, the torture got even worse.

He said he was intentionally nearly drowned in icy cold water in tubs at two sites – once while a CIA interrogator counted down from 10 before water was poured into his nose and mouth.

He previously told of being so sleep deprived he hallucinated, imagining a cow and a giant lizard in his cell and scrabbling, chained, to get away from them. 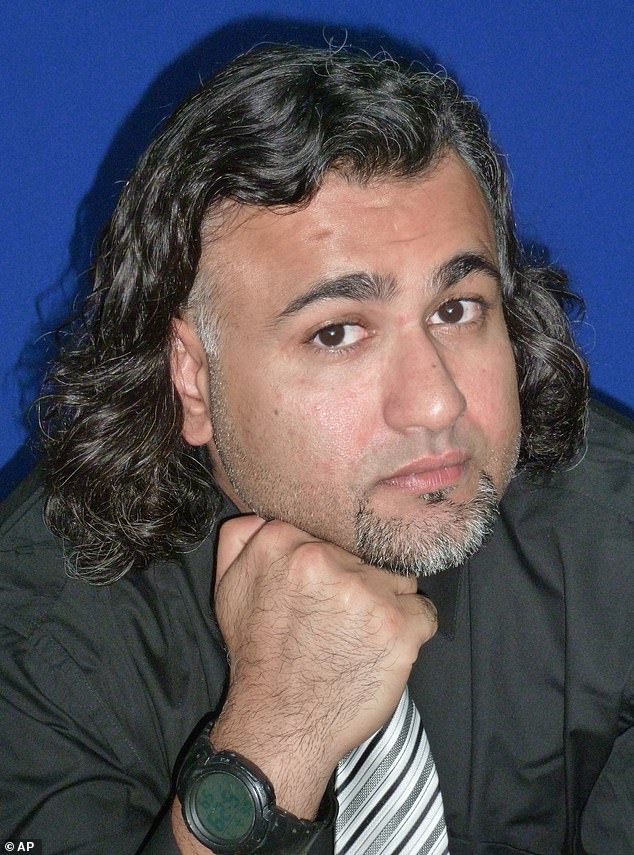 In 2014 his case was highlighted in a report of the CIA’s tactics produced by the Senate Intelligence Committee, which said that, when he refused to eat, his captors ‘infused’ a puree of his lunch through his anus.

The CIA would take a similar approach when prisoners refused to drink, pumping water into their rectums.

Khan said this was done to him with ‘green garden hoses.’

He explained: ‘They connected one end to the faucet, put the other in my rectum and they turned on the water.’

He said he lost control of his bowels after those episodes and, to this day, has hemorrhoids.

Khan told how, when he was on hunger strike, medics would force a feeding tube up his nose and down the back of his throat.

A CIA officer used a plunger to force food inside his stomach, a technique that caused stomach cramps and diarrhea.

‘To those who tortured me, I forgive you,’ he said, stating that he now rejected al-Qaeda, terrorism, ‘violence and hatred.’

He added: ‘I hope in the day of judgment that Allah will do the same for you and for me.

‘I ask forgiveness from those whom I have wronged and I have hurt.’