Jill Ellis is stepping down after leading the United States to back-to-back Women’s World Cup titles.

Ellis has been head coach of the team since 2014 and has led it to eight overall tournament titles, including victories at the World Cup in 2015 in Canada and earlier this month in France .

‘The opportunity to coach this team and work with these amazing women has been the honor of a lifetime,’ Ellis said in a statement released on Tuesday.

‘I want to thank and praise them for their commitment and passion to not only win championships but also raise the profile of this sport globally while being an inspiration to those who will follow them.’

She will remain with the team for a World Cup victory tour, which kicks off Saturday with a match against Ireland at the Rose Bowl. Following the conclusion of the five-match tour in October, she will serve as a U.S. Soccer ambassador.

Ellis’ contract was set to expire following this year’s World Cup with a mutual option to extend it through the 2020 Tokyo Olympics. U.S. Soccer will begin the search for a new coach after a general manager for the women’s national team is named.

‘Jill was always extremely passionate about this team, analytical, tremendously focused and not afraid to make tough decisions while giving her players the freedom to play to their strengths,’ U.S. Soccer President Carlos Cordeiro said. ‘She helped raise the bar for women’s soccer in the USA and the world, and given the history of this program, the level of success she achieved is even more remarkable.’ 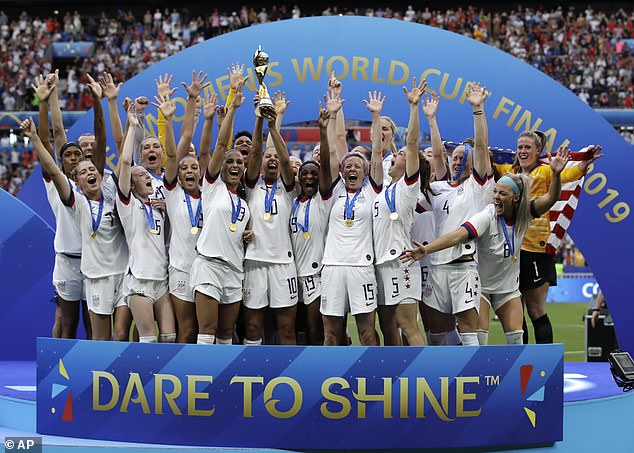 Word of Ellis’ decision was first reported by The Equalizer, a women’s soccer website. Ellis’ assistant coach, Tony Gustavsson, is also stepping down after eight years with the team.

Over the summer in France, Ellis broke April Heinrich’s U.S. women’s team record for most games coached. Overall, she has led the team in 127 matches, with 102 wins.

Ellis was an assistant to both Sundhage and Sermanni. She was on the staff of the gold medal-winning teams at the Beijing and London Olympics. She also served as head coach at UCLA for 12 seasons.

‘When I accepted the head coaching position this was the timeframe I envisioned,’ Ellis said in the statement. ‘The timing is right to move on and the program is positioned to remain at the pinnacle of women’s soccer. Change is something I have always embraced in my life and for me and my family this is the right moment.’

The World Cup title in 2015 was the team’s first since winning in 1999. Overall, the team has won soccer’s most prestigious tournament four times.

The top-ranked U.S. team has been dominant overall during Ellis’ tenure. In the 2015 World Cup, the team went undefeated en route to a 5-2 victory over Japan in the title match. The United States gave up just three goals over the course of the tournament.

The US defeated Holland 2-0 in Lyon earlier this month to claim its second straight championship, after challenging knockout victories over France and England. The Americans never trailed at the tournament and set records with 26 goals and a 12-game World Cup winning streak dating to 2015. Ellis became the first coach to lead a team to two Women’s World Cup titles.

But there was also disappointment. The three-time defending champions were knocked out in the quarterfinals in the 2016 Brazil Olympics by Sweden, the team’s earliest departure ever in the tournament.

The United States is set to play Portugal on August 29 in Philadelphia and on September 3 in St Paul, Minnesota. The final two matches of the victory tour, set for early October, have not yet been announced.

Get your FREE Premier League Fixtures Guide in association with Sky Sports, only inside Saturday’s Daily Mail.