Tehran was rocked by the digital raid on the day that President Donald Trump withdrew from air strikes at the last minute in retaliation for Iran shooting down a US drone.

Iran is desperately trying to recover intelligence destroyed in the cyber strike on June 20 and get its systems back online, officials told the New York Times.

The databases are understood to have helped the Islamic Revolutionary Guard Corps (IRGC) select which tankers to target and where. 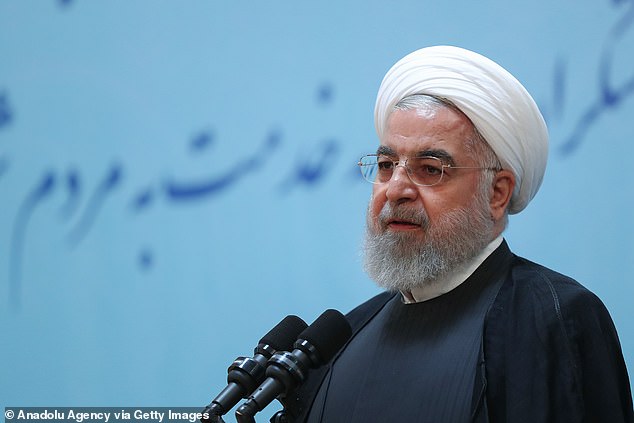 Tehran was hit by a US strike in retaliation for its decision to down a US drone in June (pictured: Iranian President Hassan Rouhani)

Since the cyber bombardment, officials say that no tankers have been targeted in significant aggression, like the limpet mine assaults in May and June.

The only exception being the British-flagged Stena Impero, when Tehran last month lashed out at its Grace 1 tanker being impounded in Gibraltar.

Details of the successful cyber attack were leaked in part to persuade doubters within the Trump administration that the operation was worth the loss of access to a critical network used by the IRGC.

Experts believe that cyber warfare, which often goes unacknowledged, much like espionage, is vital to crushing America’s opponents.

While a cyber attack will not necessarily prevent further aggression from a country like Iran, it communicates the overwhelming arsenal the US has at its disposal.

Normal Roule, a former intelligence chief, told the NYT: ‘You need to ensure your adversary understands one message: The United States has enormous capabilities which they can never hope to match, and it would be best for all concerned if they simply stopped their offending actions.’

Cyber Command has been given more powers under the Trump administration to plan and carry out its attacks.

The head of command, General Paul M. Naksone, says their strategy is ‘persistent engagement’ with the enemy.

The incessant barrage is designed to fall safely short of a provocation to war and its strike in June was considered to be a proportionate punishment for Tehran’s shooting down of the US Navy drone. 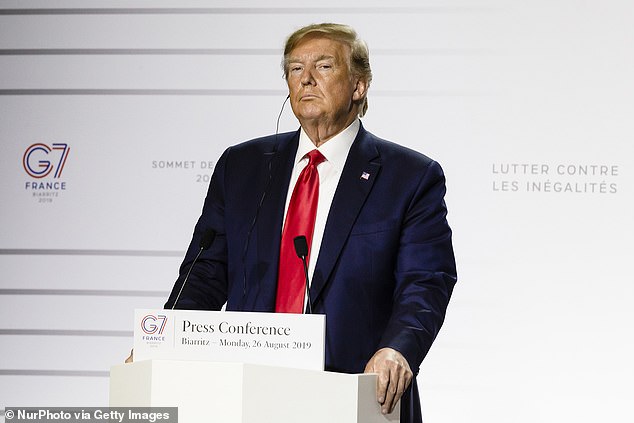 Cyber Command has been given more powers under the Trump administration to plan and carry out cyber attacks (pictured: President Trump at the G7 in Biarritz over the weekend)

But cyber broadsides like the one inflicted in June must be tempered, intelligence sources say.

Not only do they shutdown networks which the US could spy on instead, they also help enemies learn of insecurities in their digital defences.

‘It can take a long time to obtain access, and that access is burned when you go into the system and delete something,’ Gary Brown, former legal counsel for Cyber Command, told the NYT. ‘But on the same token, you cannot just use that as an excuse not to act. You can’t just stockpile access and never use it.’