A Minnesota grandmother who was wanted over the shooting deaths of her husband and a woman has been arrested in Texas near the US-Mexico border.

Lois Riess, 56, has been on the run ever since her husband David Riess was found shot dead at their home in Blooming Prairie, Minnesota on March 23.

Her second alleged victim, Pamela Hutchinson, was found dead at her condo in Fort Meyers Beach in Florida on April 9.

Lois Riess, 56, who has been on the run after allegedly killing her husband and a woman in Minnesota has been arrested in Texas near the US-Mexico border. Riess was spotted on hotel CCTV wearing her female victim’s hat 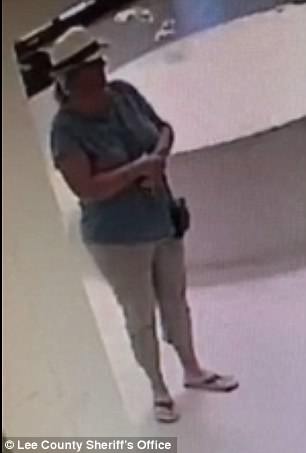 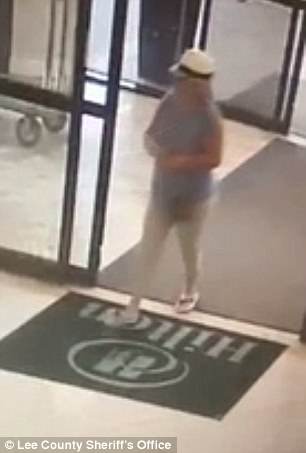 Kinsey said Riess was sitting at a restaurant by herself when the deputies arrested her.

Authorities believe Riess, who allegedly used the same gun in both shootings, may have targeted Hutchinson to assume her identity because they look similar.

The newly released surveillance videos show Riess walking away from the Marina Village in Fort Meyers Beach soon after she allegedly killed Hutchinson.

Another video captured Riess driving away from the hotel in Hutchinson’s 2005 white Acura TL.

Riess was also spotted on CCTV cameras driving up to a Hilton hotel in Ocala before calmly walking through the lobby wearing her victim’s hat.

The Lee County Sheriff’s Office would not reveal when the surveillance videos were captured.

Authorities believe Riess then headed west through Louisiana in Hutchinson’s car. The car she is thought to have been driving was last spotted in Corpus Christi, Texas.

Police suspect that Riess could be headed to Mexico and that she will strike again if she runs low on money.

Riess’ husband was found dead after his business partner told police he hadn’t shown up for work in over two weeks. 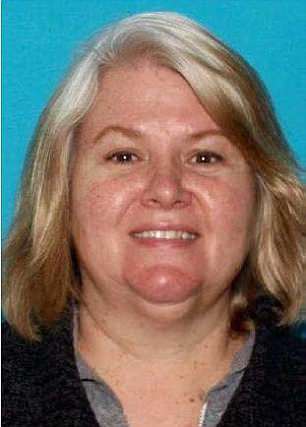 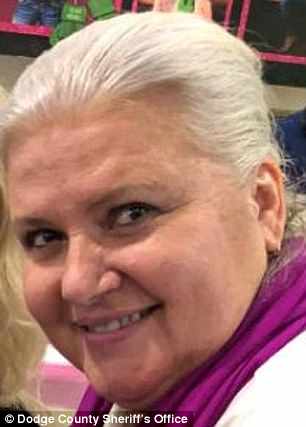 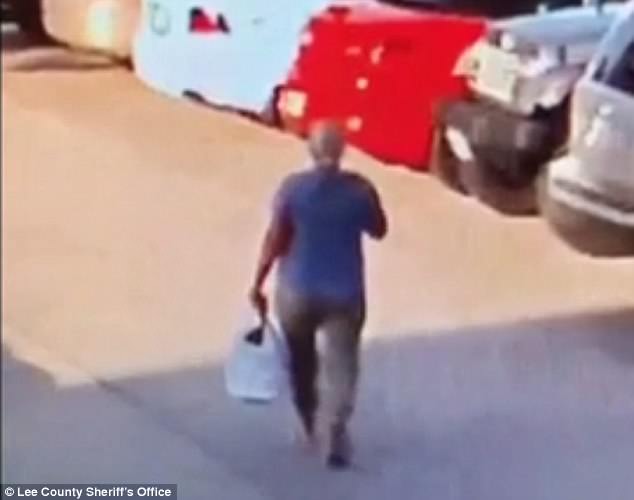 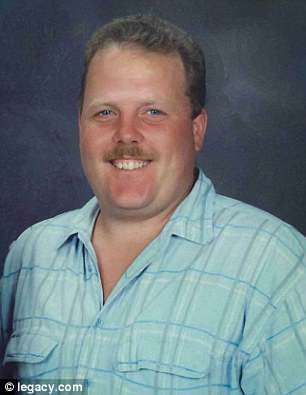 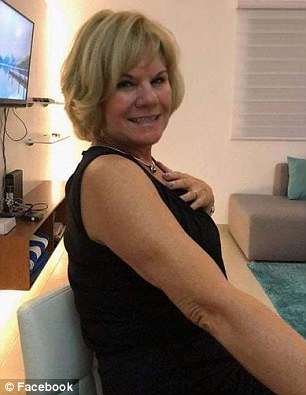 Lois Riess, 56, has been on the run since she allegedly killed her husband David Riess (left) in Minnesota last month and then shot Pamela Hutchinson (right) in Florida days later

Officials said Riess transferred nearly $10,000 from her husband’s business account and forged his signature on three checks to herself for $11,000 after his death.

She then took off for Diamond Joe’s Casino in Iowa. Authorities went to the casino but Riess had already left.

A surveillance video released earlier this week showed a smiling Riess sitting at the Smokin’ Oyster Brewery on Fort Myers Beach in Florida on April 5 as she chatted to Hutchinson – her second victim.

‘Ms Hutchinson’s purse was found to be in disarray and all cash, credit cards and identification appeared to be removed,’ Lee County Undersheriff Carmine Marceno said. 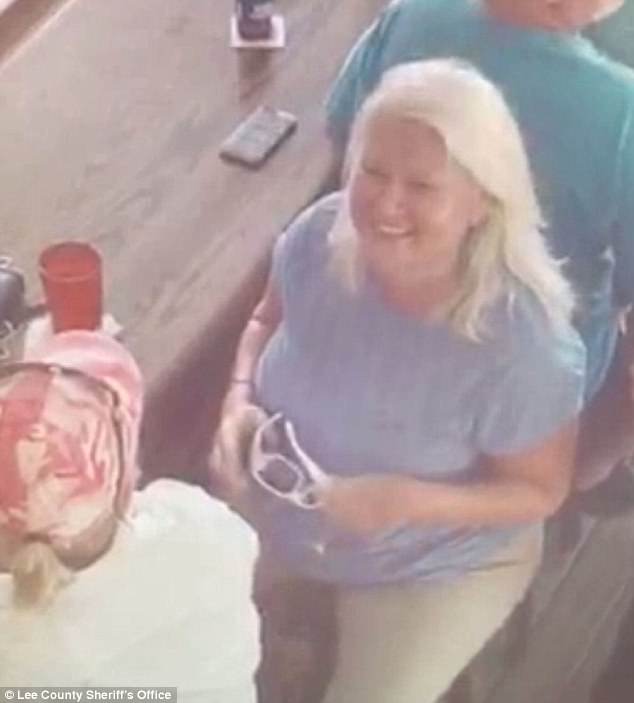 ‘Further investigation revealed that Ms Hutchinson was targeted by the suspect due to the similarities in their appearance.’

Dubbed by local authorities as ‘Losing Streak Lois,’ Riess is known to have a gambling addiction and often frequents casinos.

‘She is armed, she is dangerous, she looks like anyone’s mother or grandmother. She will smile, she’s calculated and she’s a killer on the loose.’

The US Marshals Service is offering a reward of up to $5,000 for information leading to her arrest.

Authorities have put up electronic billboards in at least five states including Texas, New Mexico, Arizona, California and Nevada. 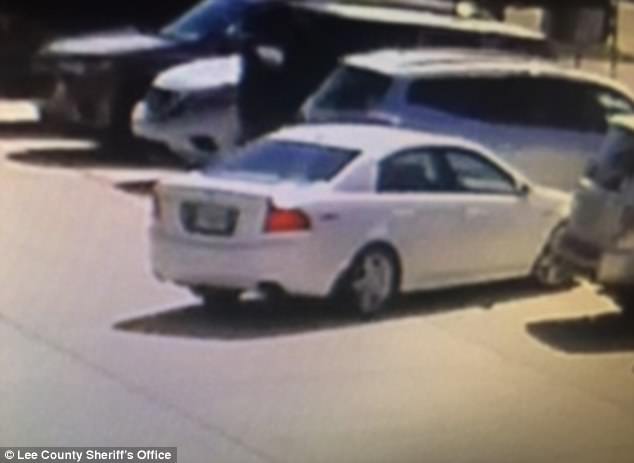 Authorities believe Riess then headed west through Louisiana in Hutchinson’s car (above). Her last known sighting was in Corpus Christi, Texas 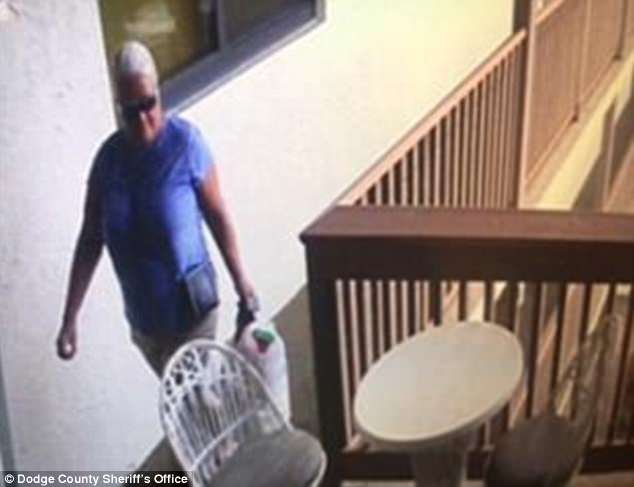