A first-time mother who was in denial about her pregnancy couldn’t deny it any longer when she went into labor — and found herself delivering her own baby, alone, in a hotel room halfway around the world.

Tia Freeman from Nashville, Tennessee gave birth to a healthy baby boy seven weeks ago, but the 22-year-old’s birthing story is bound to be a lot different from the ones the other mothers tell at future Gymboree classes.

Tia learned she was expecting late into her pregnancy, and continued to push it from her mind until she went into labor on a flight oversees. She ended up making it to a hotel in Istanbul, Turkey before drawing herself a bath, safely delivering her own child in the tub, and falling asleep.

Surprise! Tia Freeman, 22, gave birth by herself in a hotel room in Turkey 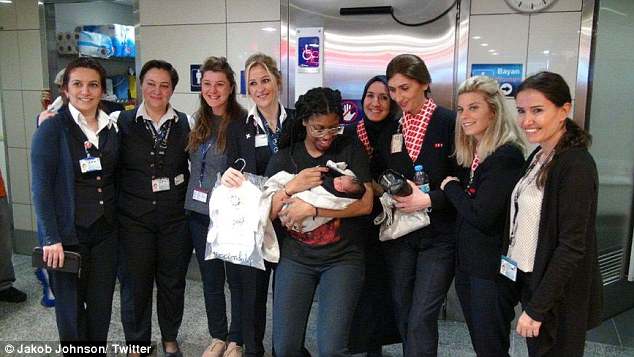 Fam photo: She thanked the crew at Turkish Airlines who helped her out the next day

Tia’s story first made national news in Turkey, and has now gone viral in the US thanks to an animated Twitter thread — but the young mom insists she still doesn’t get why her tale is such a big deal.

‘I still really don’t understand what’s so shocking about my delivery story. Lol maybe it’ll set in one day,’ she began the thread, which makes it immediately clear to everyone else just what is so shocking.

Tia was already into her third trimester when she found out she was pregnant. She was taking birth control, but says the one she was on didn’t require her to menstruate every month.

(Later, she identified it as Microgestin Fe, which actually shouldn’t have stopped her from menstruating unless she chose to skip the placebo week at the end of the pack.)

‘Not having a period wasn’t an indicator for me,’ she explained. ‘On top of that I didn’t really gain any weight.’

The tale… The first-time mom has made international headlines with her incredible birth story, which she shared on Twitter this week 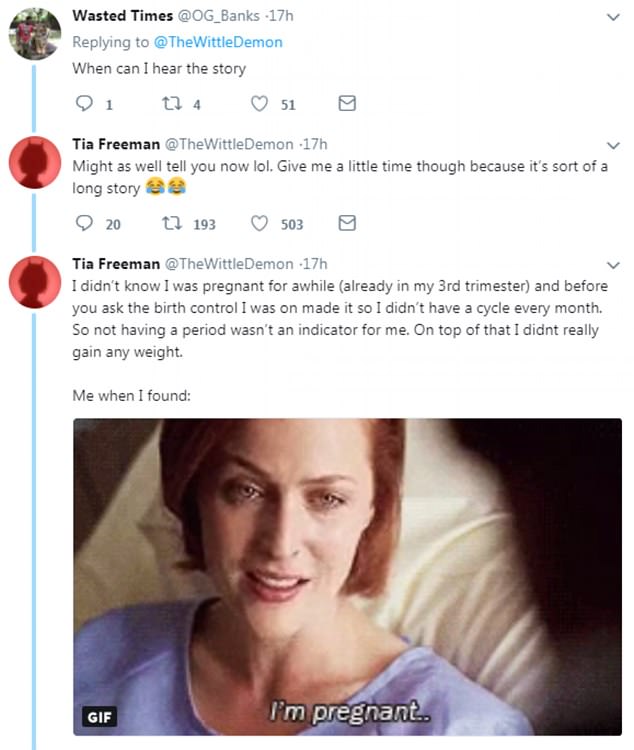 No way… Tia didn’t know she was pregnant until her third trimester, and was in denial for a while after

When she did find out she was pregnant, she spent the next month ‘in denial,’ insisting to herself that there was ‘no way’ she was carrying a baby. She was working away from home, and decided not to tell anyone about it, either.

Toward the end of her pregnancy, she had plans for a trip to Germany, and ‘ya girl was not about to waste international flight money’ — so she hopped on a plane before her due date and headed away for her vacation.

‘So everything is going well, no biggie, but dawg this is a 14hr flight & there was a complimentary meal, but everything had meat in it & you know I’m a vegetarian, so I was like, “I can’t eat this,’ she recalled.

‘But 14 hrs was too long to wait so I decided to eat the salmon hoping I wouldn’t get sick. Now I don’t know if it was the salmon, the flight, or it was just my time, but out of nowhere I start cramping up.’

She assumed she had food poisoning from the salmon and decided to go to sleep for the last hour of the flight. 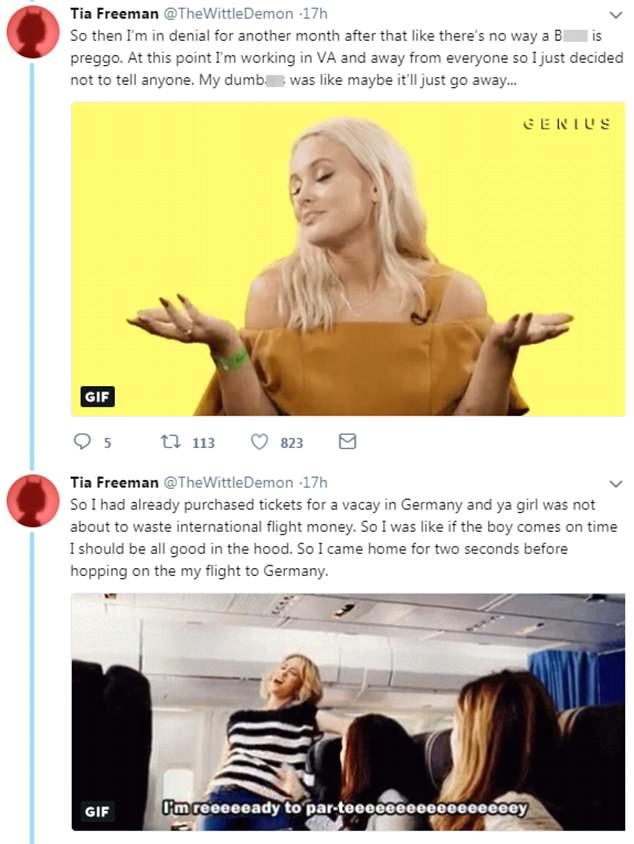 Caution to the wind: She had plans to go on vacation to Germany, and decided to go ahead with them 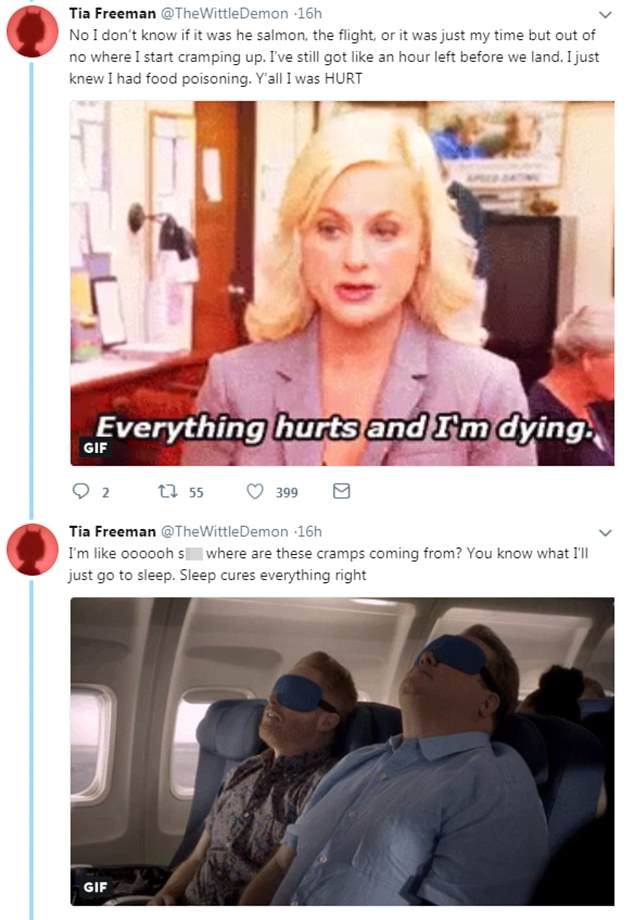 Building up: When she landed in Istanbul, where she had a 17-hour layover, she was feeling much worse

When she landed in Turkey for her 17-hour layover, though, her cramps had worsened. She just wanted to make it to the hotel she’d booked for the night, but customs was taking a long time and she was feeling terrible.

‘I’m literally gripping the railing trying to make it through the lines. At this point I feel like I’m about to pass out. I’m sweating. I feel like I have to vomit. I’m going through it. Then I’m like, “Wait a minute, b****, are you in labor?!”

After the thought hit her, she decided to Google it. But still unsure if it was real labor or she was having Braxton Hicks contractions, she painfully made her way to the hotel.

‘Either way it goes I’m not giving birth in this airport, so I start gassing myself up because I am NOT having a baby in this airport,’ she said. ‘I make it to my hotel & now I’m sure I’m in labor. There is no way in the world I’m not in labor because I can barely stand up at this point.

‘So I’m in a foreign country, where no one speaks English, I don’t know this country’s emergency number, & I have no clue what to do. 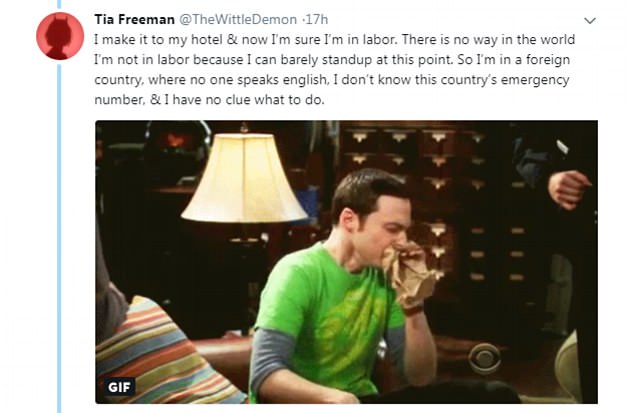 Scary… She realized she was in labor but didn’t want to give birth in the airport, so gave herself pep talks until she made it to her pre-arranged hotel 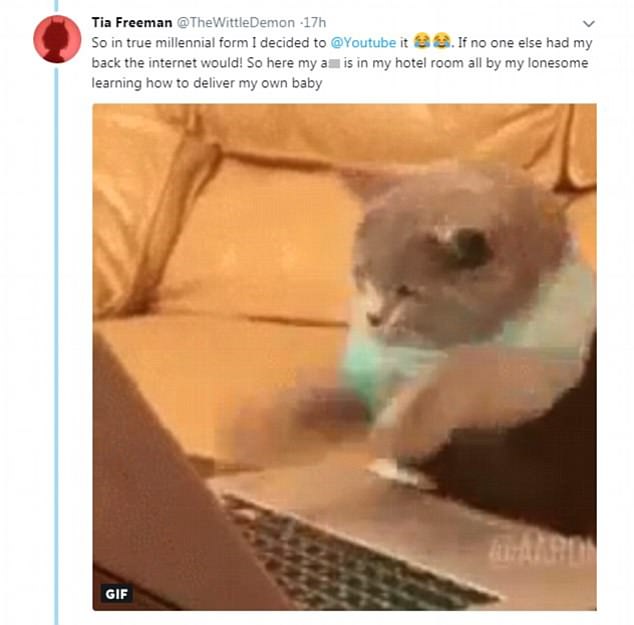 DIY: Because of the language barrier and her fear of asking for help, she decided to deliver her own baby — turning to YouTube for instructions 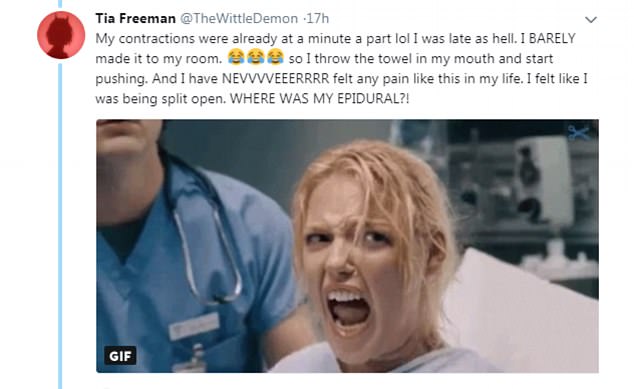 Wow: She described the intense pain as she delivered her son in the bath tub of the hotel room

‘So in true millennial form, I decided to Youtube it. If no one else had my back, the internet would! So here my a** is in my hotel room, all by my lonesome learning, how to deliver my own baby.’

Tia filled up the bath tub for a water birth, grabbed a towel to bite down on while fighting the pain, and found another towel to wrap the baby in.

‘It’s weird how focused a person becomes when they’re adrenaline starts going. Because at no point ever did I freak out. Like, I just did what I had to do,’ she said.

She followed the instructions she found online, which said to start to push when the contractions were two minutes apart. By the time she was in the tub, they were just a minute apart, meaning her baby was moments away from making his entrance into the world.

‘I have NEVVVVEEERRRR felt any pain like this in my life. I felt like I was being split open. WHERE WAS MY EPIDURAL?!’ she wrote.

‘Luckily it happened pretty quickly. I only had to push about 5-6 times before a baby popped out,’ she went on. ‘Now let me tell you, babies are buoyant. That little joker said bloop and floated right on up to the top of the water.’ 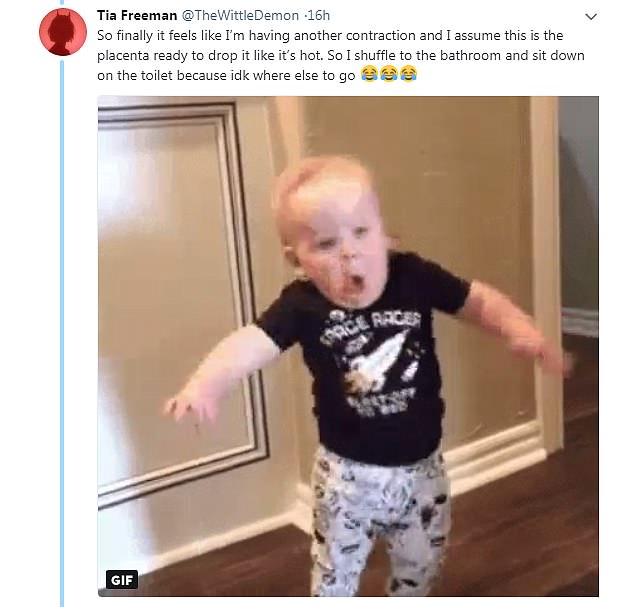 Next step: Luckily, the birth went quickly, and she knew from the internet to wait for the afterbirth 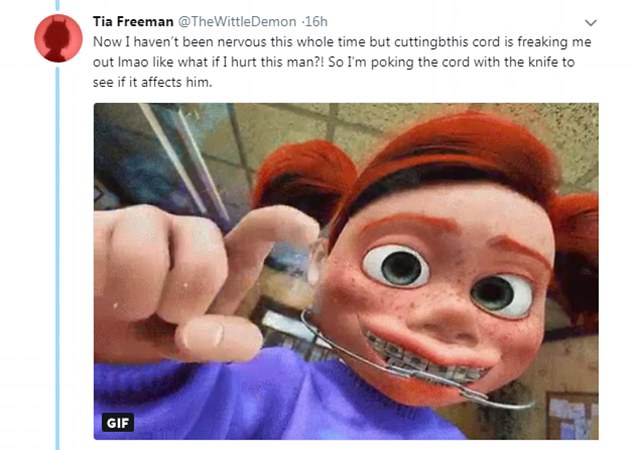 Smart: She was nervous about cutting the cord, but sliced it with a knife and tied it off with her shoelaces, which she had sterilized in the room’s kettle

After noting that she’d had a boy, she knew she needed to wait until the placenta, attached to the umbilical cord, followed him out. She again followed along with what she read online, rubbing her lower abdomen to ‘persuade my placenta to come on out’ while holding her baby with the other hand.

The placenta came out, and she used knives to cut it.

‘You’re supposed to measure off like 2 inches from the stomach and tie one lace and then tie the other inch another inch from there. Now you cut the cord in between,’ she said.

‘Now, I haven’t been nervous this whole time but cutting this cord is freaking me out … like what if I hurt this man?! So I’m poking the cord with the knife to see if it affects him. Fortunately it doesn’t (which the internet said it wouldn’t) so I cut right into that thang! And it’s tougher than it look.’

Using shoelaces, which she had sterilized in boiling water in the hotel room’s electric kettle, she clamped the end of the cord.

Though she was now exhausted, she needed to clean the bathroom ‘because it looked like the set of a horror movie,’ so she scrubbed everything down, breastfed her new baby, and went to sleep. 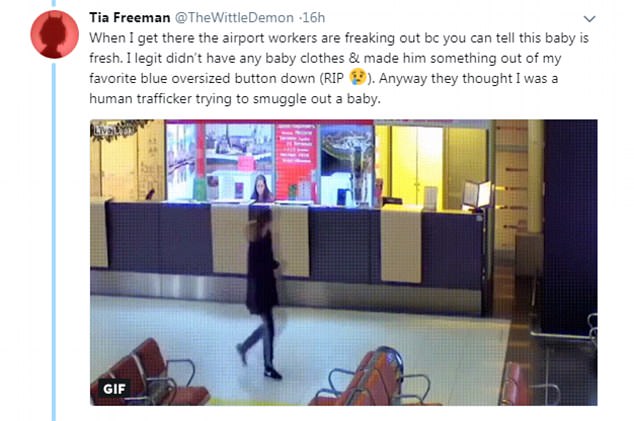 Experts: The next day, she went back to the airport — not for the next leg of her flight, but to ask officials there what to do next 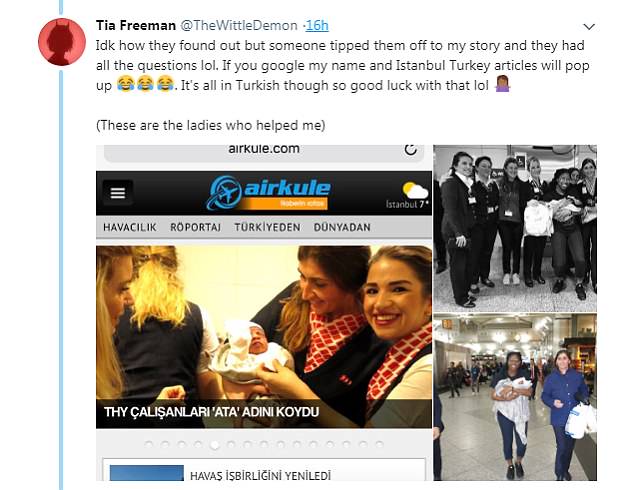 Safety: After police, customs, and a doctor determined she was not trafficking the baby and it was indeed hers, they sent her to the US Consulate 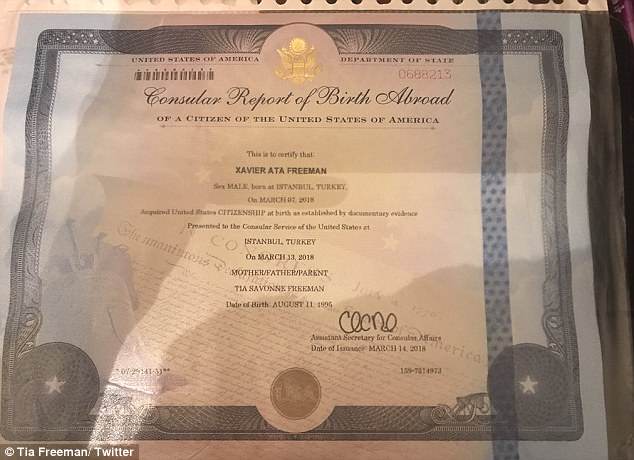 Official: There, she got a birth certificate and passport for her baby

Still, her story wasn’t over. The next morning, she was meant to go to the airport to catch her connecting flight. Though she knew she wouldn’t actually be flying on to Germany, she also had questions about leaving the country with her new baby — and figured there was no better place to ask than the airport.

‘When I get there the airport workers are freaking out because you can tell this baby is fresh. I legit didn’t have any baby clothes & made him something out of my favorite blue oversized button down,’ she wrote. ‘Anyway, they thought I was a human trafficker trying to smuggle out a baby.’

After having a doctor and nurse check her out to determine that she had in fact just given birth, she also spoke with customs, the police, and higher-ups at the airline.

During this time, someone tipped off the press, who turned up in full force to take her picture. All good! Xavier Ata Freeman was later checked out at the hospital and found to be healthy 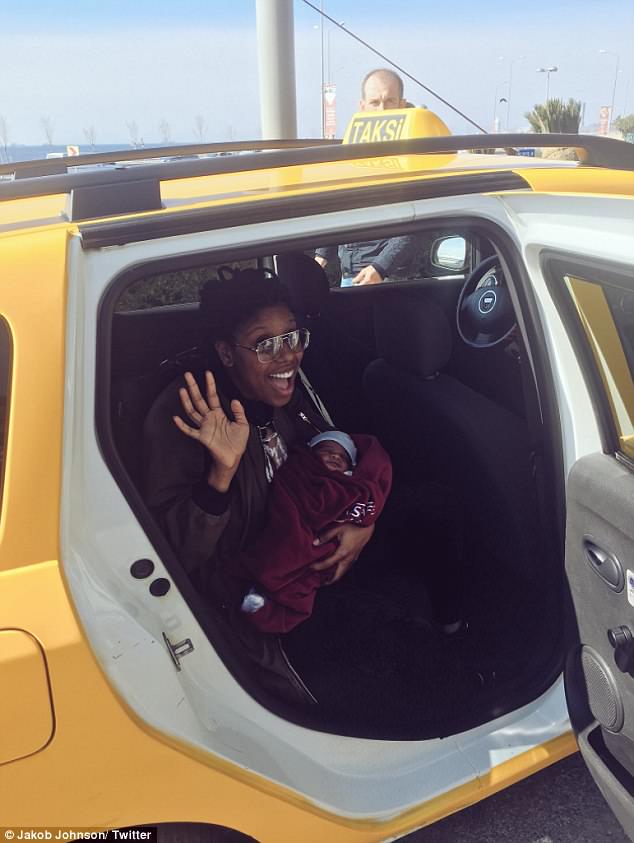 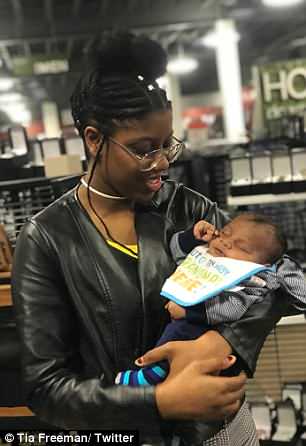 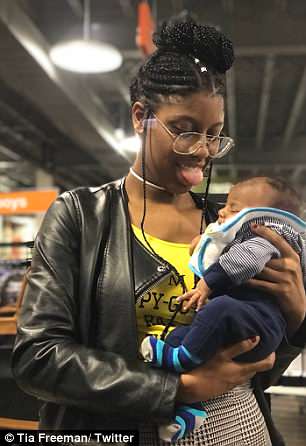 Shock: Her family, who didn’t know she was pregnant, learned she gave birth a few days after it happened

Tia then headed over to the US Consulate, who asked her a lot of questions and issued her a birth certificate and passport for her new little one. They also insisted on taking her and the baby to the hospital for a check-up, where they found out for sure that the baby was healthy.

Tia ended up staying in Turkey for two weeks to recover, during which time Turkish Airlines paid for her hotel. They also comped her meals and upgraded her and her friend — whom she was supposed to meet in Germany — to first class for their flight home.

‘Oh and no one knew I had a baby until days after I gave birth to him (not even my mom) so I sprang this story on everyone,’ she concluded.

‘Here he is Xavier Ata Freeman born March 7, 2018 in Istanbul, Turkey! My little surprise bundle of international joy! (His middle name is Turkish).’