Both Pyongyang and Washington are pressing ahead on plans for a meeting between the two leaders after Trump pulled out of the scheduled June 12 summit on Thursday, only to reconsider the decision the next day.

The Washington Post, citing a person familiar with the arrangements, said Sung Kim, a former U.S. ambassador to South Korea and former nuclear negotiator with the North, was leading the preparations on the U.S. side.

The meetings are expected to continue on Monday and Tuesday and are focused on the issue of North Korea´s nuclear weapons program, it said.

Trump said Saturday after an event with reporters that things were going ‘very well’ in terms of the summit with North Korea.

‘I think there’s a lot of good will,’ the president said.

‘People want to see if we can get the meeting and get this done. We are looking at June 12th in Singapore.’

Trump had cancelled the meeting on Thursday, blaming ‘hostility’ shown by a North Korean official who threatened nuclear war for the change, but appeared to have been calmed by apologetic communications from Pyongyang.

He explained his reasoning, and threatened a nuclear showdown with North Korea, through a letter sent to leader Kim Jong Un. 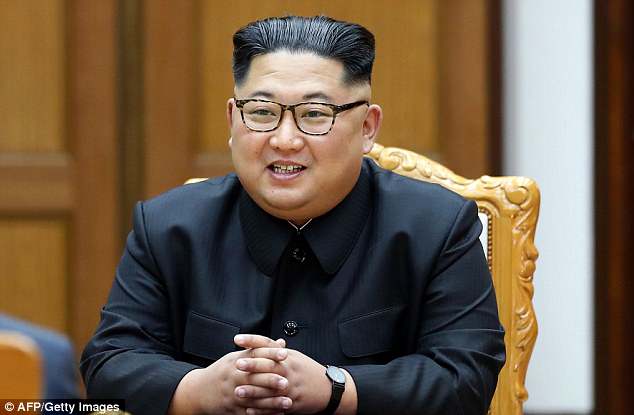 ‘Based on the tremendous anger and open hostility displayed in your most recent statement, I feel it is inappropriate, at this time, to have this long-planned meeting,’ he wrote.

‘Therefore, please let this letter serve to represent that the Singapore summit, for the good of both parties, but to the detriment of the world, will not take place.’

South Korean President Moon Jae-in said earlier that he and North Korea’s Kim agreed at a surprise meeting on Saturday that the possible North Korea-U.S. summit must be held, Moon told a news conference in Seoul. 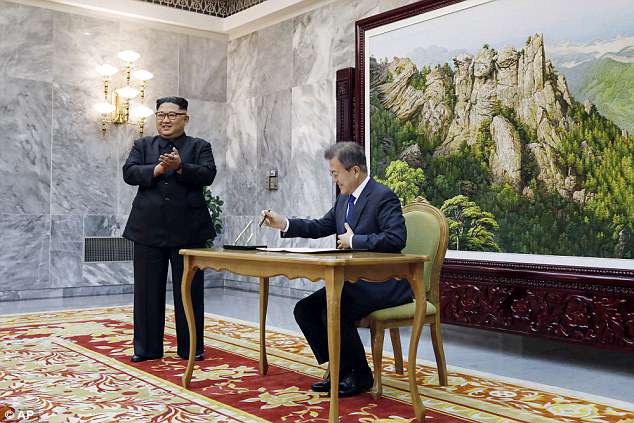 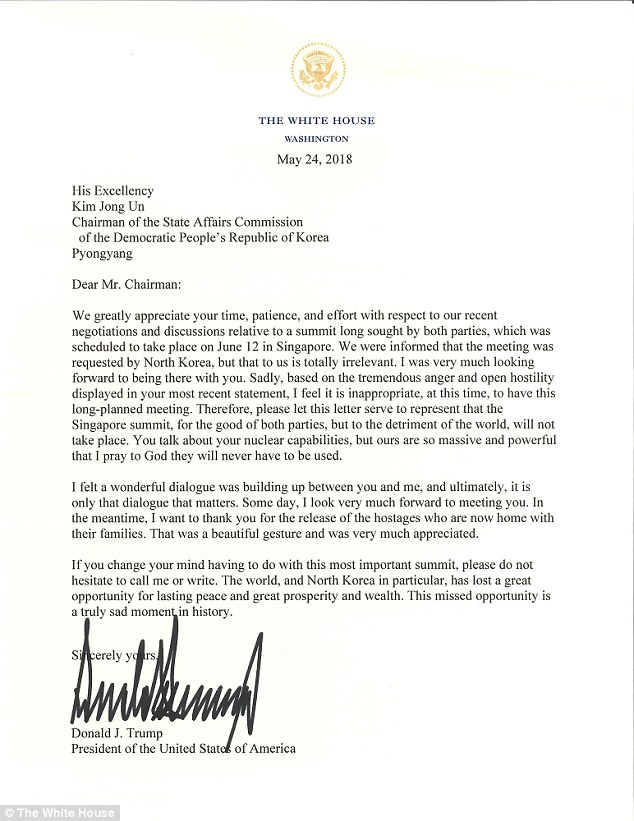 Kim reaffirmed his commitment to “complete” denuclearization of the Korean Peninsula and to a planned meeting with Trump, Moon told a news conference in Seoul.

“Chairman Kim and I have agreed that the June 12 summit should be held successfully, and that our quest for the Korean peninsula’s denuclearization and a perpetual peace regime should not be halted,” Moon said.

The meeting was the latest dramatic turn in a week of diplomatic ups and downs surrounding the prospects for an unprecedented summit between the United States and North Korea, and the strongest sign yet that the leaders of the two Koreas are trying to keep the on-again off-again meeting on track.

While maintaining that Kim is committed to denuclearization, Moon acknowledged Pyongyang and Washington may have differing expectations of what that means and he urged both sides to hold working-level talks to resolve their differences.

A statement from North Korea’s state news agency KCNA said Kim expressed “his fixed will” on the possibility of meeting Trump as previously planned.

Trump said on Saturday he was still looking at a June 12 date for a summit in Singapore and that talks were progressing very well.

“We’re doing very well in terms of the summit with North Korea,” Trump said at the White House. “It’s moving along very nicely. So we’re looking at June 12th in Singapore. That hasn’t changed. So, we’ll see what happens.”

A White House team will leave as scheduled for Singapore this weekend to prepare for the possible summit, a White House spokeswoman said on Saturday.

Moon, who returned to Seoul on Thursday morning after meeting Trump in Washington in an effort to keep the U.S.-North Korea summit on track, said he delivered a message of Trump’s “firm resolve” to end the hostile relationship with North Korea and pursue bilateral economic cooperation.

Trump said in a letter to Kim on Thursday he was cancelling the planned Singapore summit, citing North Korea’s “open hostility.”

The Trump administration has demanded that North Korea completely and irreversibly shut its nuclear weapons program. Kim and Trump’s initial decision to meet followed months of war threats and insults between the leaders over the program.

American officials are skeptical that Kim will ever fully abandon his nuclear arsenal, and Moon said North Korea is not yet convinced it can trust security guarantees from the United States.