The Chinese consulate in Houston has been raided by U.S. officials, shortly after it officially closed for business.

The consulate, which Donald Trump forced to close on Wednesday, was reportedly a hot bed of spies and was being used to steal medical research.

Beijing was told that the consulate must cease operations by Friday.

On Friday afternoon, hours after the consulate officially closed, a group of men who appeared to be U.S. officials were seen forcing open a back door of the consulate. 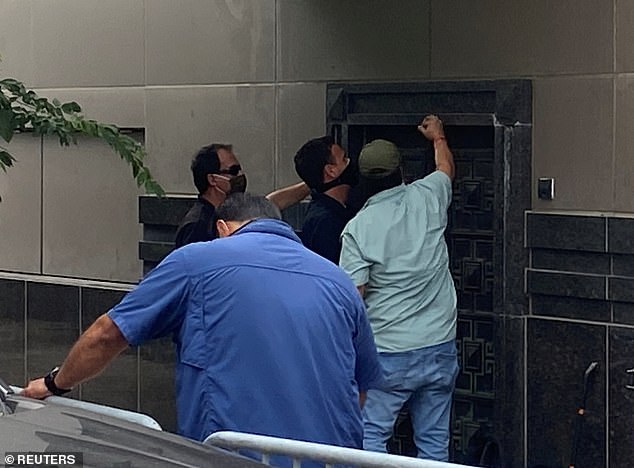 Teams of what appeared to be U.S. officials barged their way into the empty building

According to a Reuters witness, consulate staff had exited the building shortly after 4pm and left in vehicles. The back door was then forced open.

Chinese authorities have called on Washington to reverse its decision as it said the closure of the diplomatic office was ‘breaking down the friendship bridge.’

In response, China has now ordered the closure of the US consulate in Chengdu – also within 72 hours.

The U.S. has an embassy in Beijing and consulates in Shanghai, Guangzhou, Chengdu, Shenyang, Wuhan and Hong Kong.

The Chinese consulate is one of five in the U.S., not counting the embassy in Washington DC. 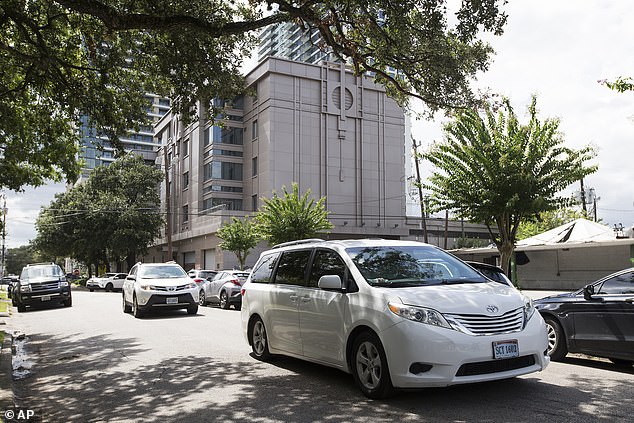 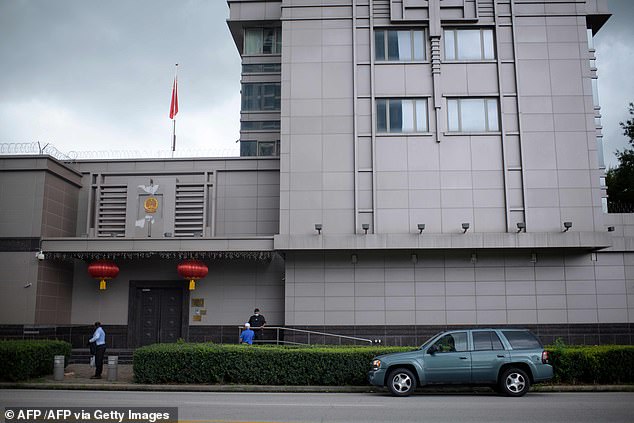 The Chinese consulate in Houston closed its doors Friday, after an announcement Wednesday

On Tuesday, hours before the administration made public its order to vacate the building, consulate employees were seen starting fires in a courtyard of the Houston building, prompting police officers and firefighters to rush to the area.

Fire crews were prevented from accessing the compound. 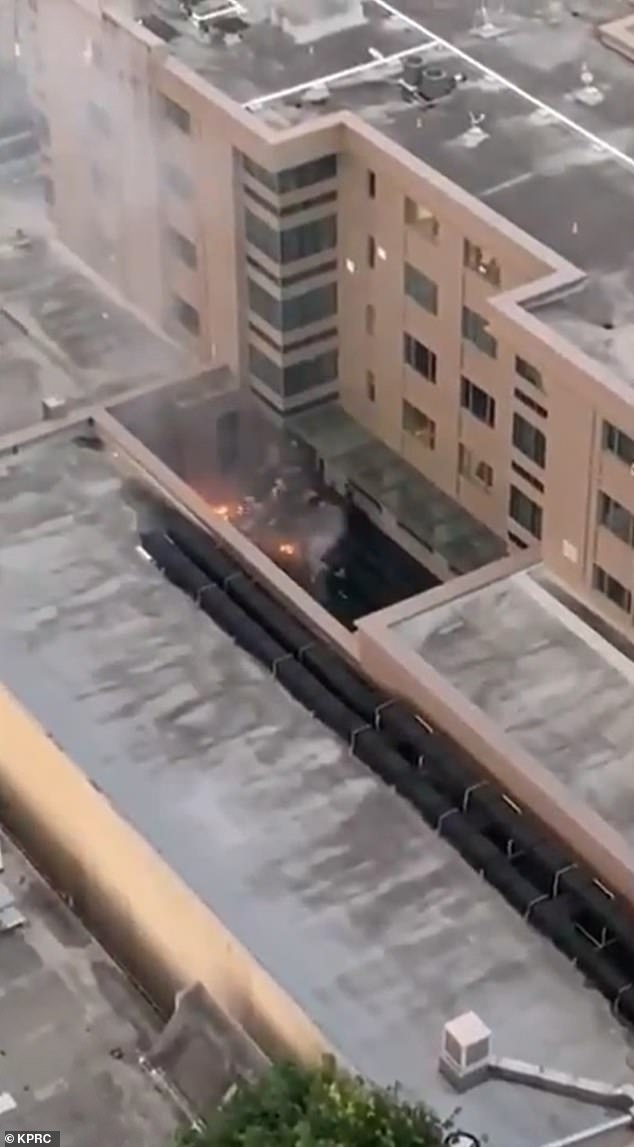 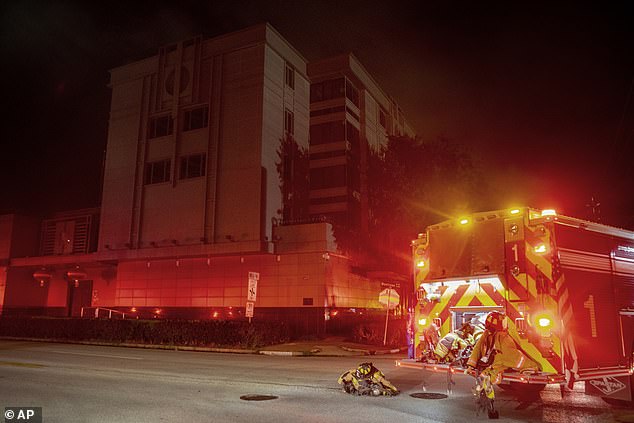 Sources on Wednesday told NBC that the consulate was known as being a center for Chinese spying.

Mark Warner, Democrat senator for Virginia and ranking member of the Senate Intelligence Committee, told NBC News’s Katy Tur that he would not discuss the specific intelligence behind Wednesday’s closure.

‘But I can tell you for the last two years, I and other members of the intel committee have been holding classified briefings with business leaders and academic leaders about the concerted efforts of the Chinese communist party to steal our intellectual property, to steal it from companies, to steal it from universities, to be on better guard,’ he said.

Warner suggested the action was driven by the FBI and its intelligence. 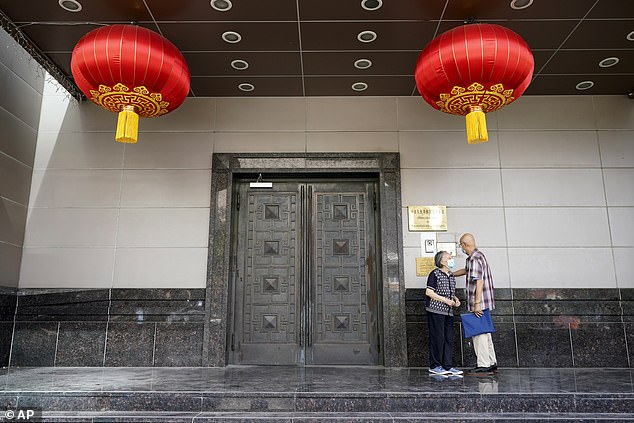 China has five consulates in the United States. The Houston one, pictured, closed on Friday

David R. Stilwell, who oversees policy for East Asia and the Pacific at the State Department, told The New York Times that the Houston consulate had a history of engaging in ‘subversive behavior’.

He said the consulate was the epicenter of research theft in the United States.

For instance, Stilwell said, said the consul general, the top Chinese official there, and two other diplomats were recently caught using false identification to escort Chinese travelers to the gate area of a charter flight from George Bush Intercontinental Airport.

Stilwell said that some of China’s attempted scientific thefts in the United States had accelerated over the last six months, and could be related to efforts to develop a vaccine for the coronavirus – although he again presented no evidence.

Mike Pompeo, the Secretary of State, who has been a leader in aggressively pushing hard-line policies on China, said Wednesday at a news conference in Copenhagen that the Trump administration was ‘setting out clear expectations as to how the Chinese Communist Party is going to behave.’

He warned that the United States would ‘take actions’ to protect its interests. 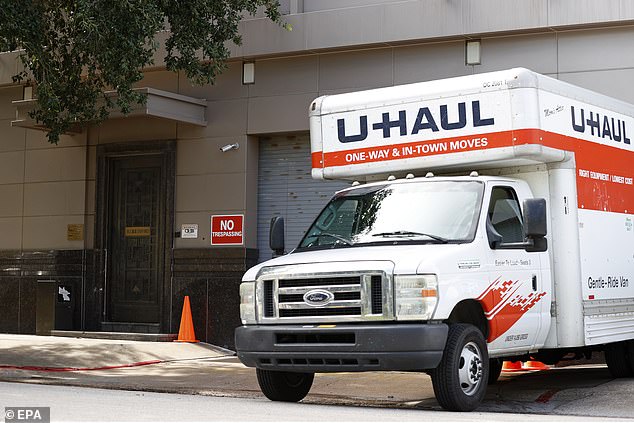 Moving vans were pictured outside the consulate in Houston on Wednesday

Much of the interest in Houston has focused on the University of Texas MD Anderson Cancer Center.

In April 2019, three out of five scientists identified by federal authorities as being involved in efforts to steal American research on behalf of China at MD Anderson were ousted by the institution.

A fourth scientist resigned before the conclusion of the investigation, and the fifth was disciplined by the center.

Trump said during a news conference on Wednesday evening that ‘it’s always possible’ his administration would close more Chinese missions.

The consulate closure marks a further breakdown in relations between the world’s two largest economies, and is a significant shift from just six months ago, when the countries signed a trade deal and Trump boasted that the U.S.-China relationship ‘might be the best it’s been in a long, long time.’ 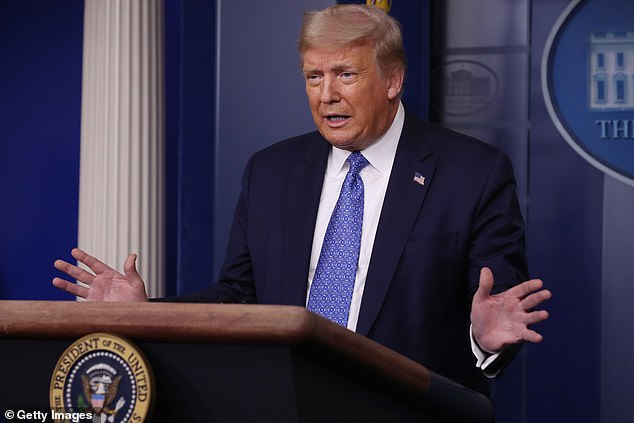 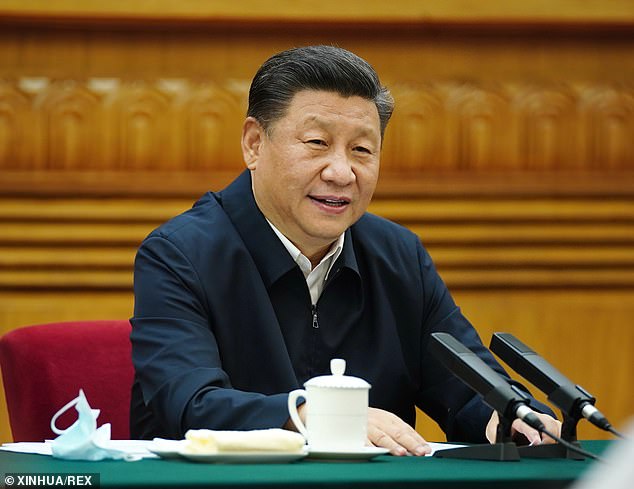 Now relations between Trump and China’s leader, Xi Jinping, are at a low

Now, in addition to closing the consulate, the U.S. is also considering a ban on Chinese-owned mobile apps such as Tik Tok, removing Chinese technology from the electrical grid, and sanctioning Communist Party officials over the internment of Muslims and a security law that effectively ends Hong Kong’s independent legal status.

Trump has also cut off additional trade talks and threatened to penalize China because he said ‘they could have stopped’ the pandemic.

Hua Chunying, foreign ministry spokeswoman, described the reasons given by the US for closing the consulate as ‘unbelievably ridiculous’.

She urged the U.S. to reverse its ‘erroneous decision’, or China would ‘react with firm countermeasures’.

‘While Chinese diplomats are promoting mutual understanding and friendship, the US embassy in China publicly attacks China’s political system,’ she said.

‘As a result of smears and hatred fanned up by the US government, the Chinese embassy has received bomb and death threats.’