WARSAW, Poland (AP) – The United States and Poland on Saturday took a strong stand against a planned gas pipeline linking Russia to Germany, saying it is part of a Kremlin scheme to politicize energy and undermine attempts to make Europe less dependent on Moscow.

Tillerson said the pipeline was “not a healthy piece of infrastructure” for Europe’s energy stability.

U.S. Secretary of State Rex Tillerson, right, meets with Poland Prime Minister Mateusz Morawiecki during a visit to Warsaw, Poland, Saturday, Jan. 27, 2018. Tillerson’s two-day visit to Poland was to include discussions of security and other issues and a visit to a memorial site to martyrs of the Warsaw ghetto uprising on International Holocaust Remembrance Day on Saturday. (AP Photo/Czarek Sokolowski)

“Like Poland, the United States opposes the Nord Stream 2 pipeline,” Tillerson said at a news conference with his counterpart. “We see it as undermining Europe’s overall energy security and stability and providing Russia yet another tool to politicize energy as a political tool.”

The pipeline would be the second to carry Russian gas directly to Germany and Western Europe via the Baltic Sea instead of through Poland and Ukraine.

The U.S. has for years tried to wean its friends and allies in Europe from their dependence on Russian natural gas, which Moscow is accused of using as leverage in disputes with Ukraine and other countries.

Poland is wary of Russian intentions with the pipeline and “we share the view that it is necessary to diversify energy supplies into Europe,” Czaputowicz said.

Poland began importing liquid natural gas from the U.S. last year. Tillerson encouraged further such sales and spoke in favor of a pipeline that would run from Poland to Norway.

In addition to energy security, the diplomats pledged to boost military cooperation. Poland, Czaputowicz said, would like to see the U.S. enhance its military presence in the country.

“The stationing of American troops on our territory gives us, the Poles, a sense of security and we are grateful for that,” he said. “We want this presence to be even bigger and we want it to be permanent.”

The Poland-U.S. security relationship received a boost last year with the deployment of some 5,000 U.S. troops to Poland as part of two separate American and NATO missions. The deployments were intended reassure allies on NATO’s eastern flank that the alliance was serious about protecting them from Russian aggression. 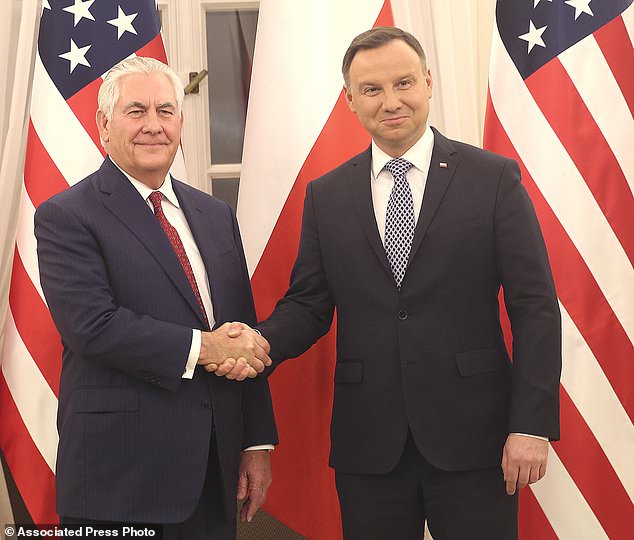 Rex Tillerson, U.S. Secretary of State, meets with Polish President Andrzej Duda, during a visit to Warsaw, Poland, Friday Jan. 26, 2018. Tillerson’s two-day visit to Poland was to include discussions of security and other issues and a visit to a memorial site to martyrs of the Warsaw ghetto uprising on International Holocaust Remembrance Day on Saturday. (AP Photo/Czarek Sokolowski)