Coronavirus cases and deaths across the United States have fallen to their lowest numbers since early fall.

On Sunday, the U.S. recorded 32,065 new infections, which is the lowest figure since September 8, when 26,387 new cases were reported.

Meanwhile, the seven-day rolling average of 57,221 is lowest number seen in one month, according to a DailyMail.com analysis of Johns Hopkins University data.

The figure is far below January’s peak of about 247,000 average new cases and even below the late July surge, when daily cases were averaging about 68,000.

A total of 279 coronavirus deaths were reported on Sunday, marking the seventeenth-straight day in a row that fatalities have been below 1,000.

Just three states – Alabama, Arizona and Oregon – are reporting an increase in COVID-19 infections with all other states either holding steady or seeing a decline.

This is likely due to an increasing number of coronavirus vaccinations with 139.9 million people – 42.2 percent of the population – receiving at least one dose and 94.7 million – 28.5 percent – fully vaccinated.

The spread of variants is currently linked to the rise of hospitalizations in southern Florida, with the number of patients increasing by more than 10 percent over the last month.

In California and New York, both former epicenters of the pandemic, hospitalizations are on the decline to even record low numbers.

However, Florida, which has completely reopened, is reporting fewer coronavirus cases per capita than many states that have COVID-19 restrictions and mask mandates in place, according to the Centers for Disease Control and Prevention (CDC).

On Sunday, the U.S. recorded 32,065 new infections, which is the lowest figure since September 8, when 26,387 new cases were reported. 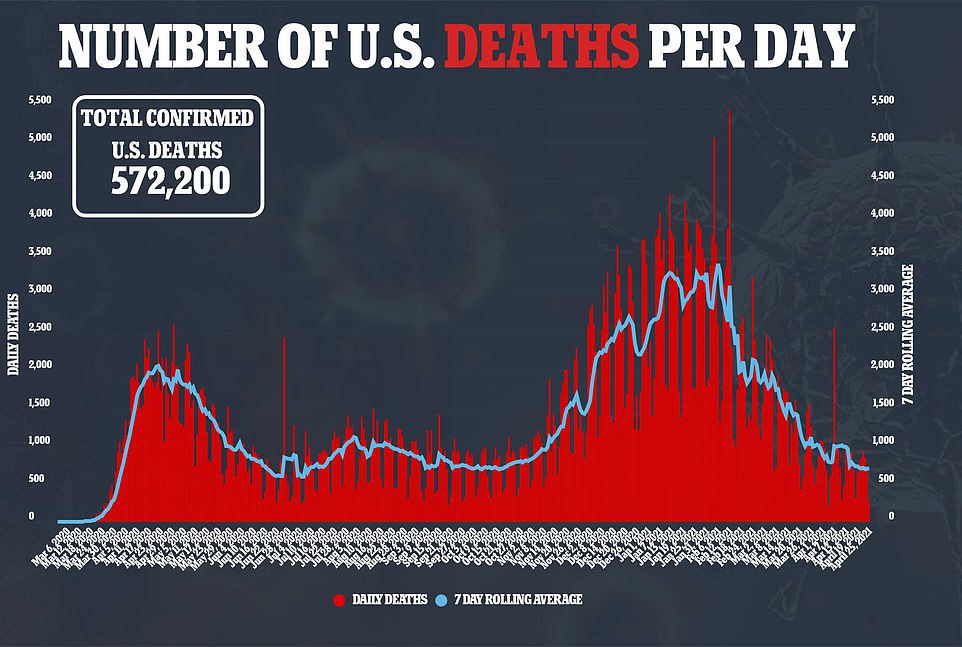 A total of 279 coronavirus deaths were reported on Sunday, marking the seventeenth-straight day in a row that fatalities have been below 1,000. 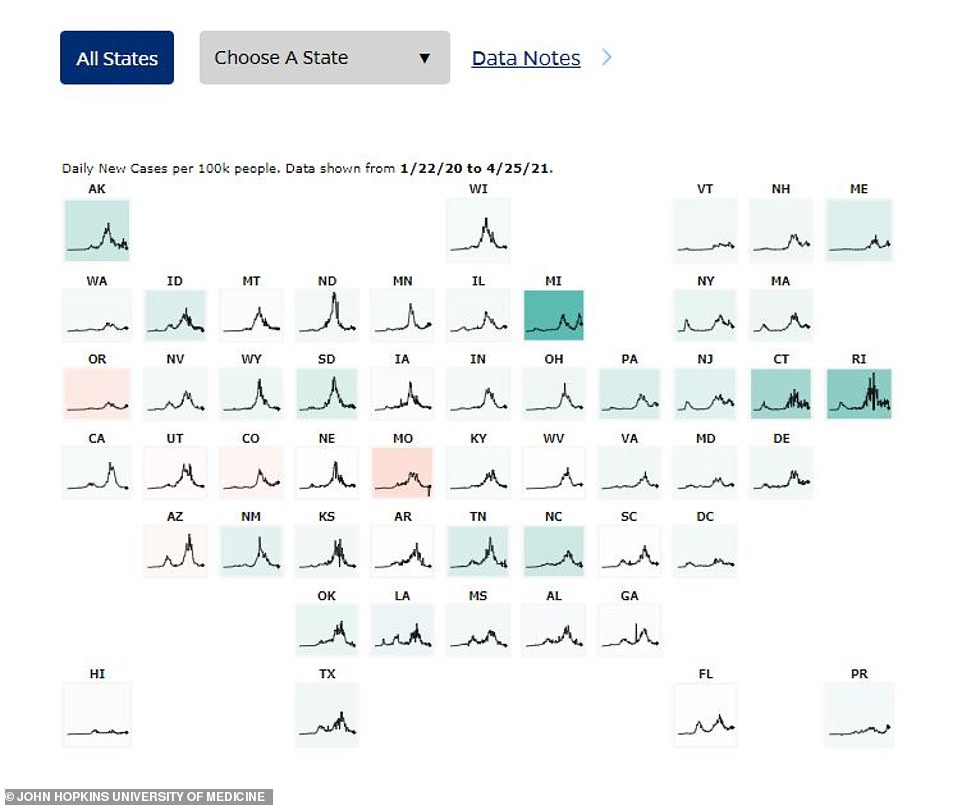 According to the South Florida Sun Sentinel, hospitalizations are beginning to tick up as variants spread across the state.

CDC data show that 54.6 percent of all infections in The Sunshine State are believed to be linked to the UK variant, known as B.1.1.7.

At least 5,000 cases are confirmed in the state, with the most in Broward County – where Fort Lauderdale is located – at more than 1,200.

The county also leads with the highest number of patients hospitalized with B.1.1.7, currently 35 out of a total of 126, reported the Sun Sentinel.

The newspaper found that hospitalizations in the state have increased 16 percent to more than 3,500 since April 1 and just three counties – Broward, Miami-Dade and Palm Beach – are reporting a 12 percent increase since the beginning of the month.

Dr Thomas Macaluso, chief medical office for Memorial Healthcare System, which operates five hospitals in Broward, said the number of COVID patients has increased from 200 one month ago to 260. 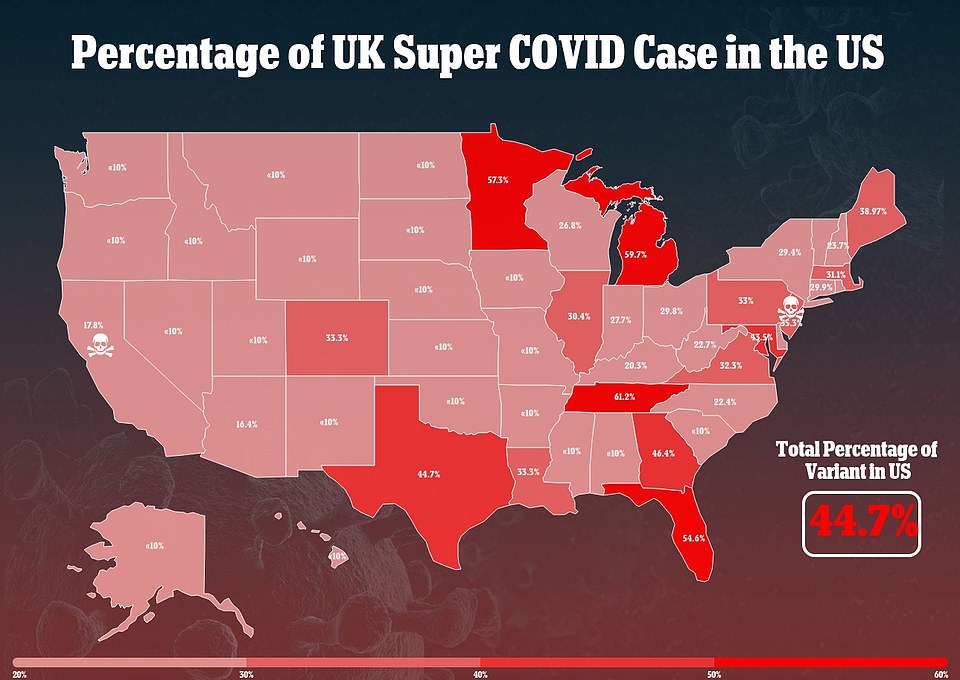 Doctors say the rise is due to the spread of variants, with more than 50% of cases in the state linked to the more contagious UK variant, known as B.1.1.7 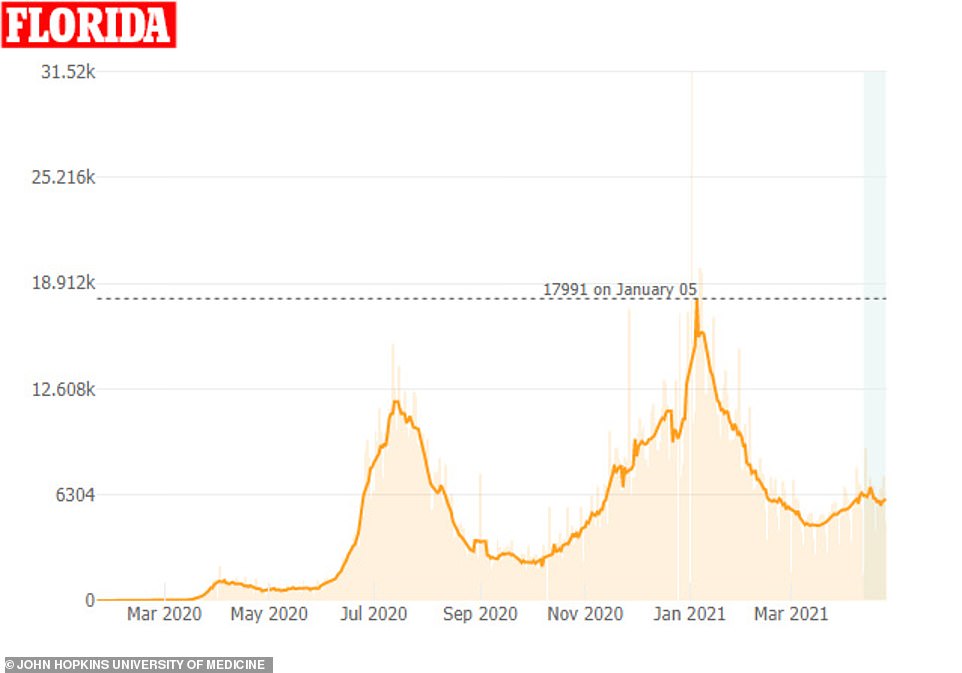 Florida is reporting 27.4 coronavirus cases per 100,000 over the last seven days, lower than several other U.S. states

He told the Sun Sentinel that the combination of highly transmissible variants and low rates of younger people vaccinated means the upward trend will only continue.

‘We are preparing for this to go on for a while. We just re-opened an ICU that we had closed,’ he said.

In other states where a high percentage of variants are spreading, hospitalizations seem to be on the downturn.

For example, in New York, where B.1.1.7 makes up about 30 percent of cases, coronavirus hospitalizations continue to decline, falling to 3,198 as of Sunday morning.

Despite the decline after a plateau that lasted from March to the beginning of April, the number is still higher than the figures recorded over the summer. 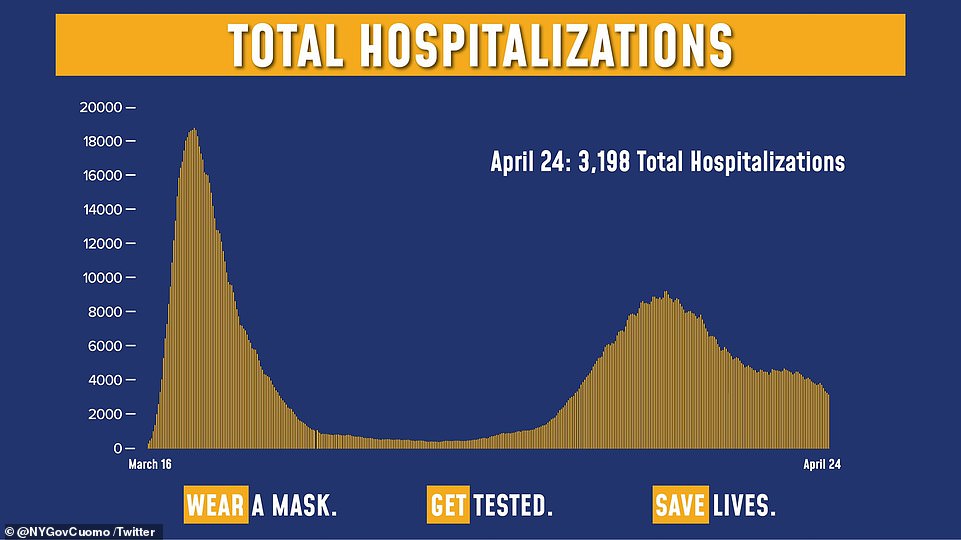 In New York, hospitalizations have fallen to just below 3,200, which is the lowest figure seen since November 26 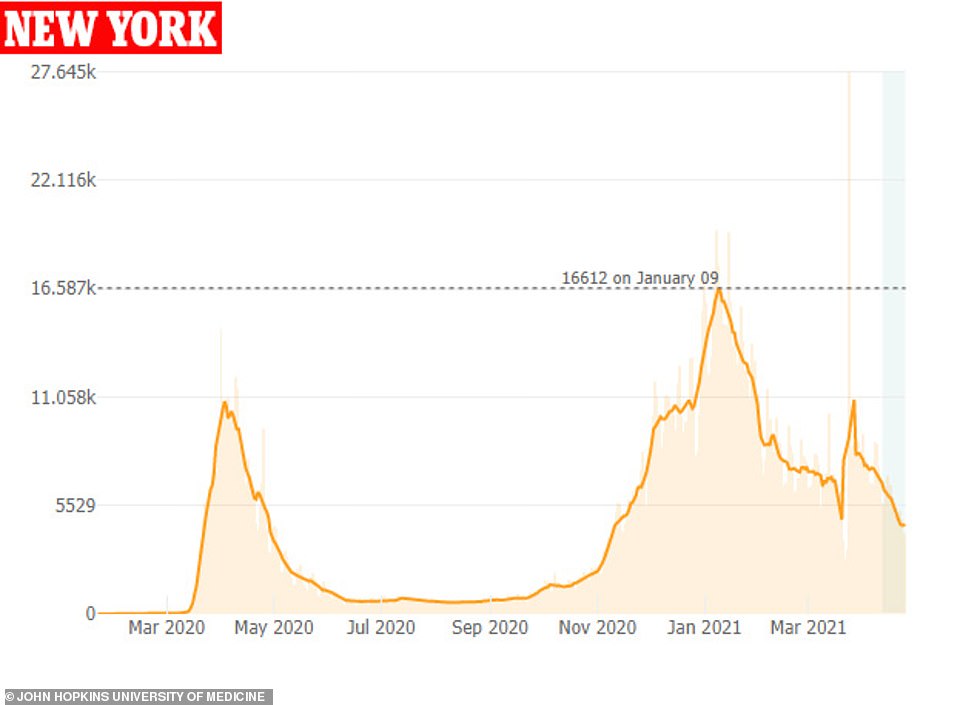 New York is reporting a decreasing number of hospitalizations but a hgiher number of cases per capita than Florida with 28 cases per 100,000 over the last week in New York City 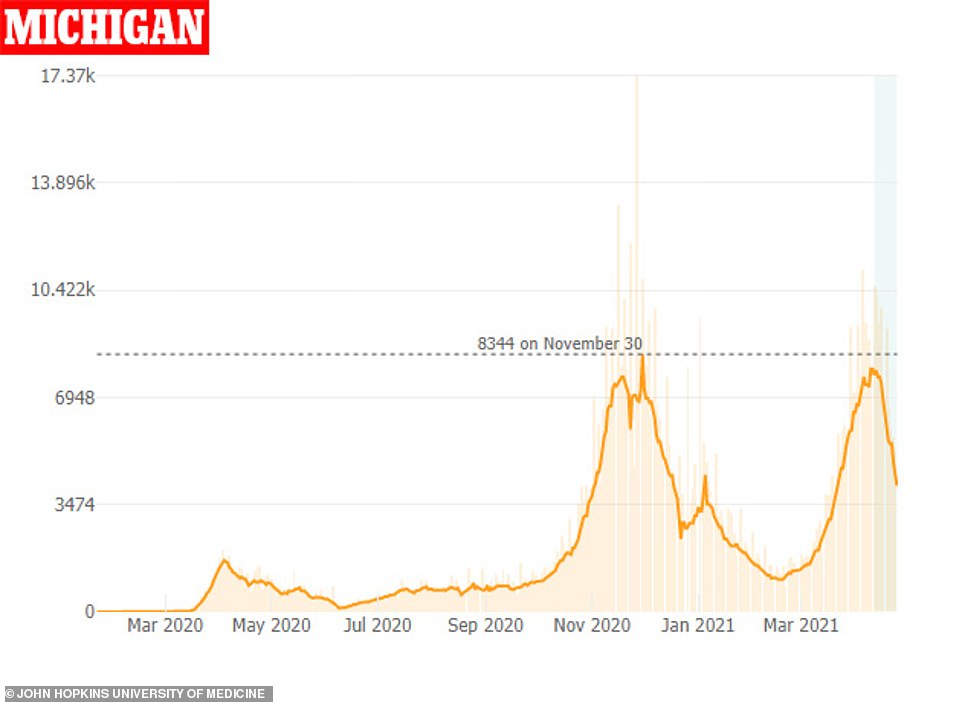 Michigan is reporting a high number of cases per capital than Florida with 54.5 cases of the virus per 100,000 in the last seven days

‘Remember, it’s not over,’ Governor Andrew Cuomo said during a press conference in New York City on Thursday.

‘But we are headed in the right direction and we have the tools to actually make a difference.’

Hospitalizations are also declining in COVID-19 cases in California reached a total of 2,052, the lowest number ever reported during the course of the pandemic.

It’s a stark change from just a few months ago when California was the epicenter of the coronavirus pandemic, during which ambulances could be seen waiting outside hospitals for beds to open.

However, despite the increasing number of hospitalizations in Florida, the state is still reporting fewer coronavirus cases than Michigan and New York City, CDC data show. 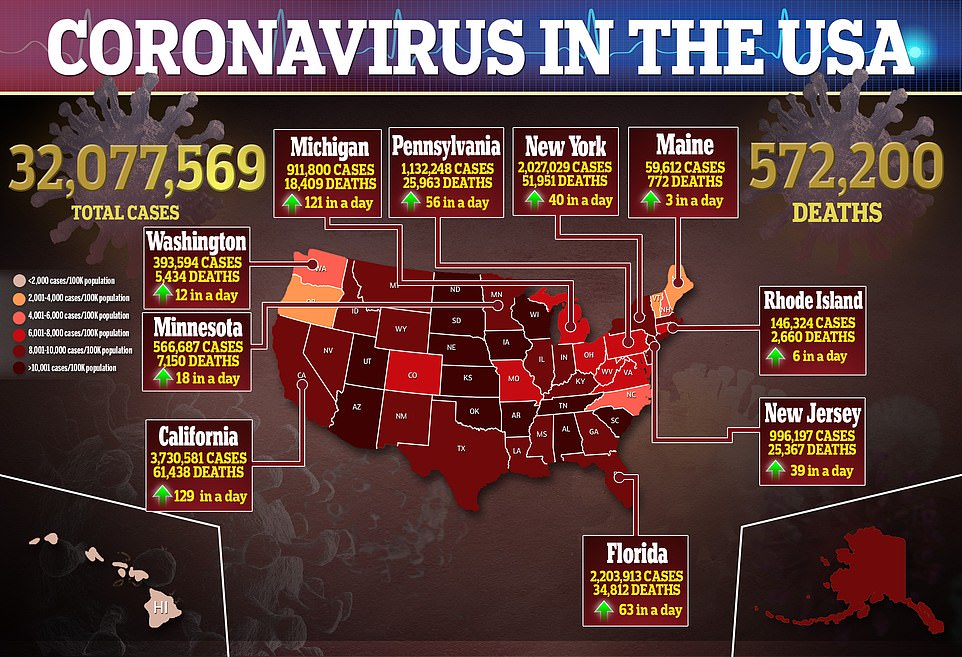